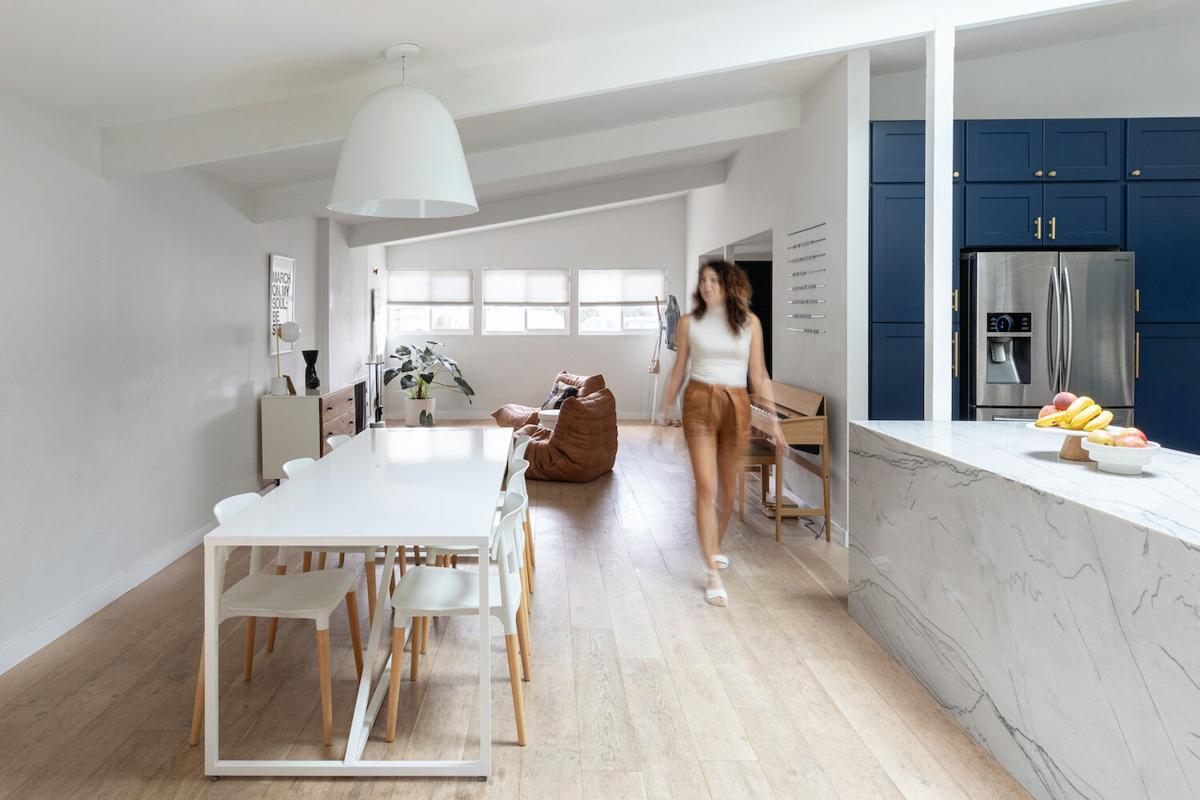 Hannah designs for aesthetics, but her interiors are filled with practical pieces, too. The dining chairs, for instance, can be wiped clean. The brown leather chairs in the front room, replicas of Michel Ducaroy’s Togo chairs, provide the perfect spot to lounge or nap. And Hannah bought the Roland Kiyola piano to foster her children’s musical inclinations (Jason plays multiple instruments) while staying true to her own midcentury-modern style. Inspired by Scandinavian furnishings but made in Japan, this digital piano comes with Bluetooth so the kids can stream songs while they play along. 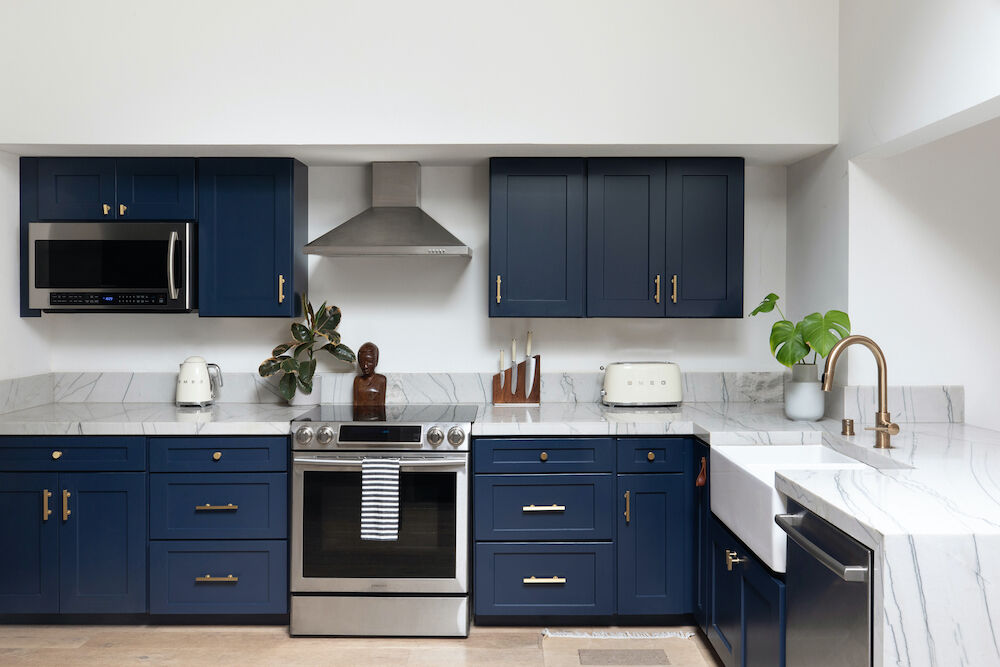 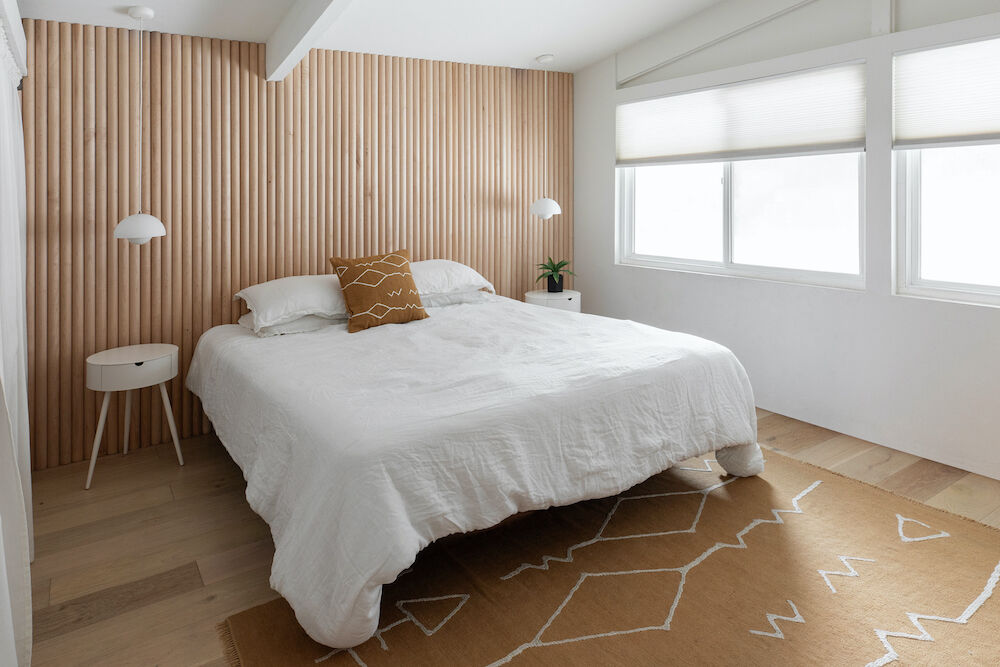 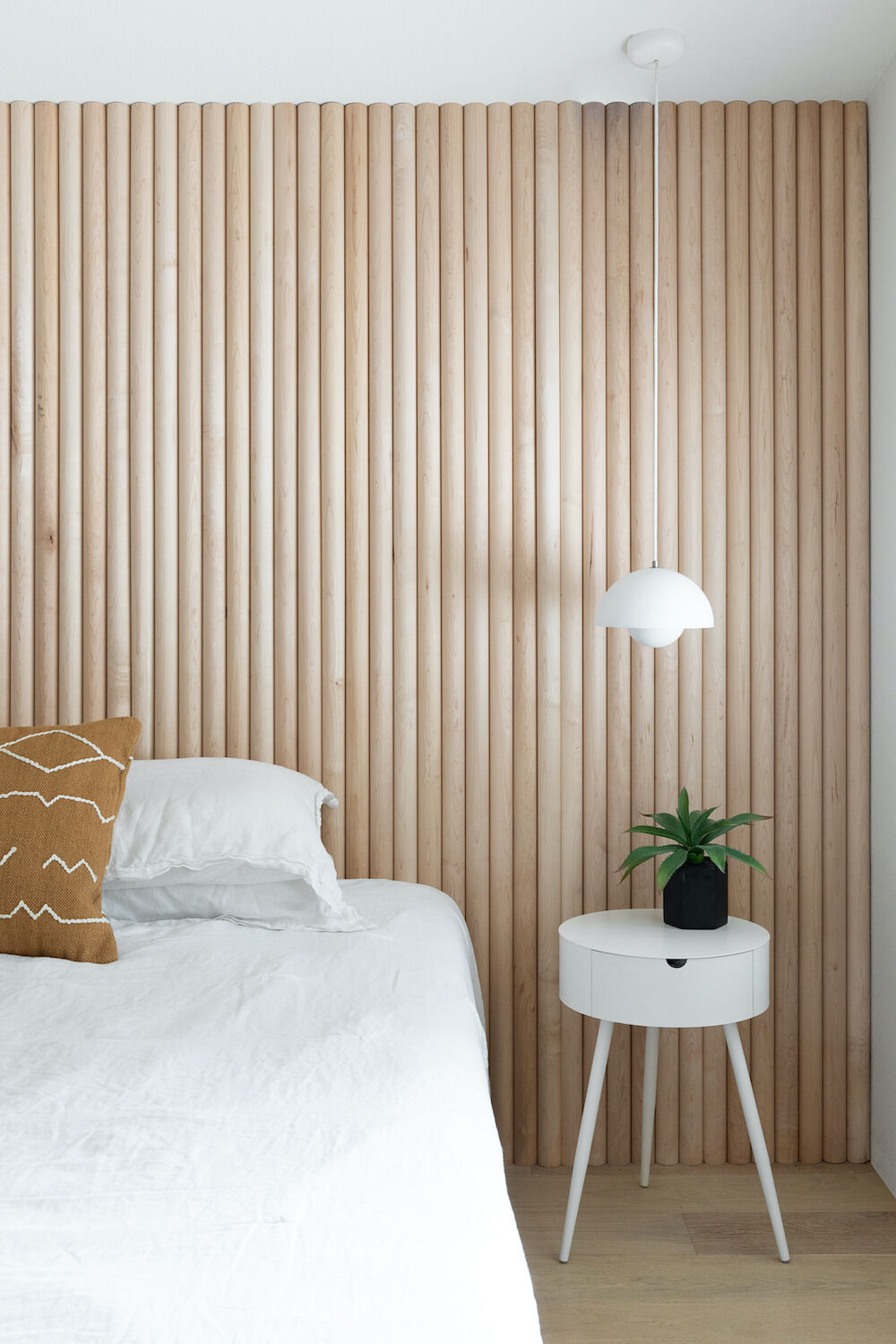 After renting—and not being able to hang lights—for 14 years, Hannah insisted on pendants above the nightstands in the primary bedroom. “I know it’s completely unnecessary, but I loved it,” she says. During their bedroom makeover, they finally ran the outlet wiring up the wall and through the ceiling. 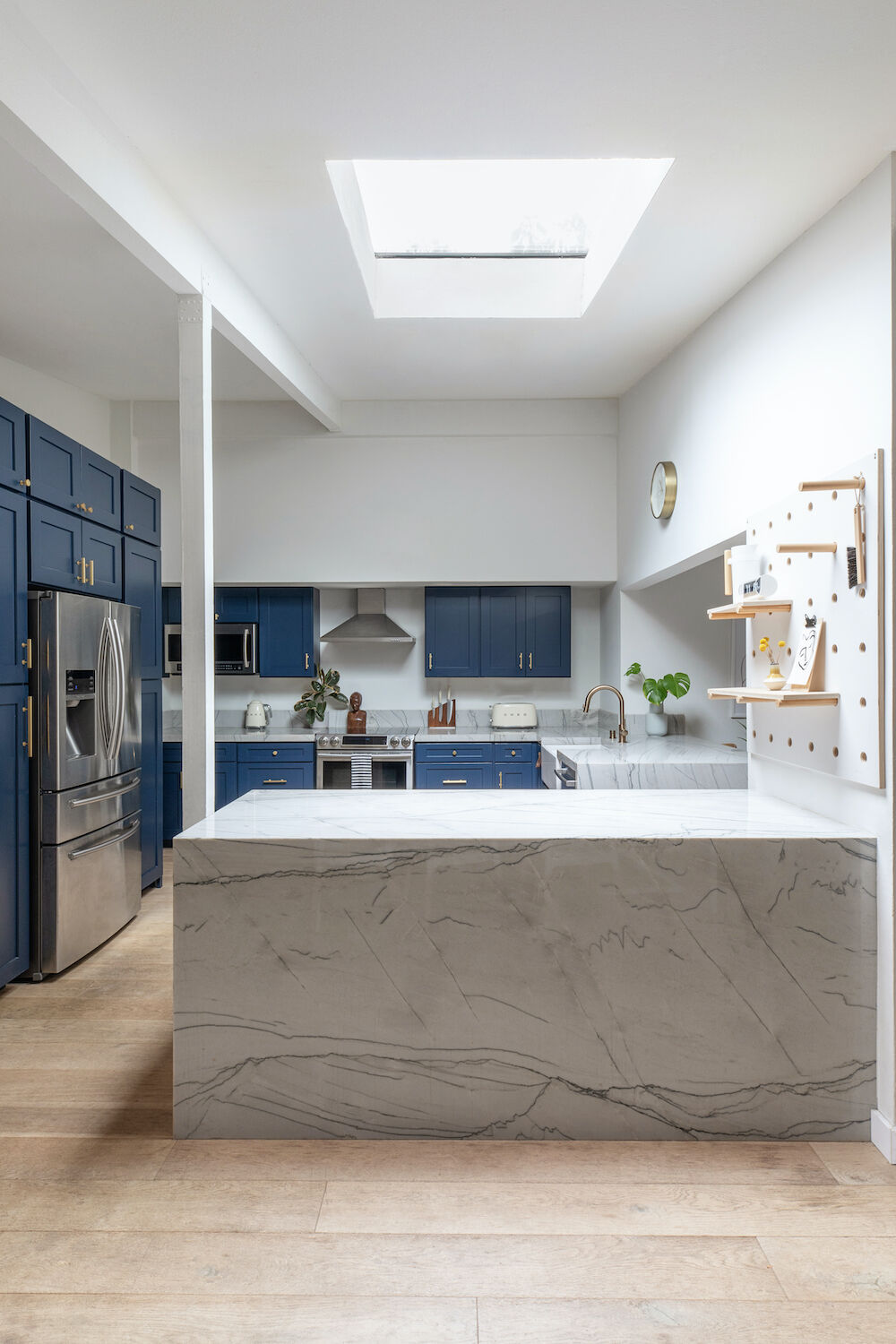 Hannah believes the earth provides the best design resources. So there’s at least one plant in every room, oak planks blanket the floors, and the countertops come from slabs of quartzite from Brazilian Exotic Granite. That doesn’t mean, however, that she shies away from a bit of contrast, too. Hannah wanted to add Lew’s Hardware solid brass knobs and pulls to the cabinetry in the kitchen, but the budget didn’t allow it. Then she donated their salvaged cabinets to REStore and serendipitously spotted the exact hardware from her list there. 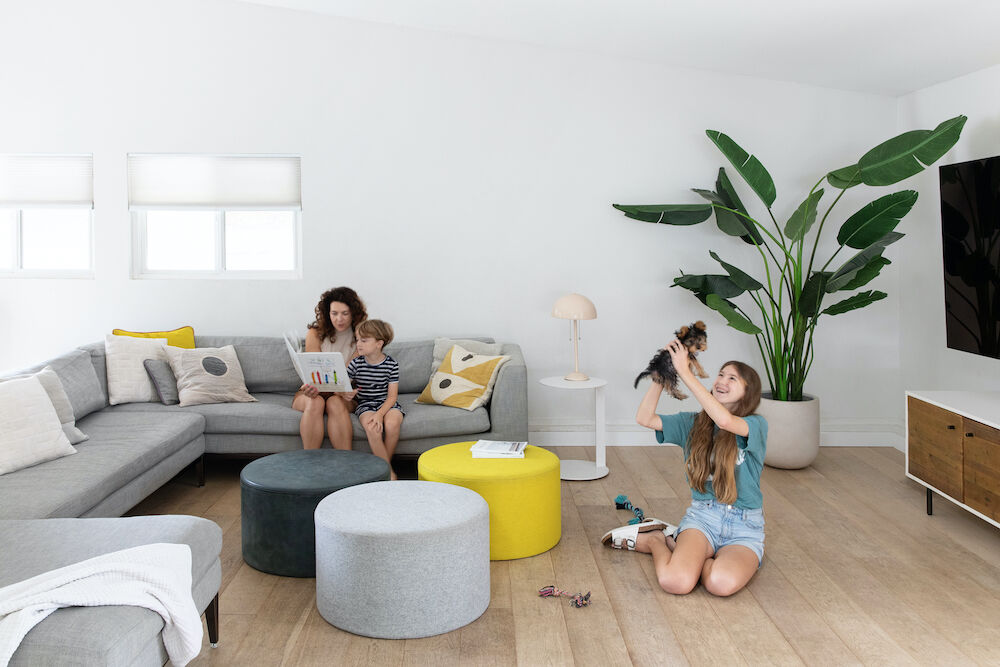 Homeowner Hannah Weatherred (pictured here reading to her son, Justus, while daughter Naomi plays with new puppy Benjamin on the floor) loves to play with shapes. She purchased the trio of multitasking ottomans from Blu Dot because of their versatility. They function as extra seats (on Sundays), foot rests, or a table for family board games. On the couch, block-print pillow covers from Block Shop Textiles in Los Angeles reinforce the room’s gray-and-yellow color scheme. 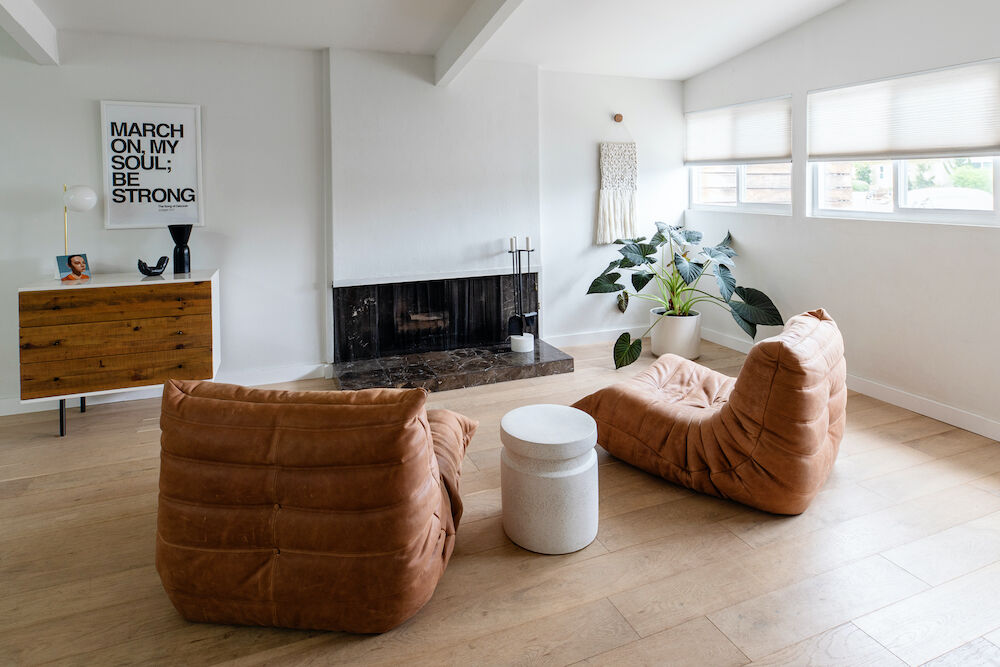 Hannah turned a favorite Bible verse into artwork. “In the tumultuous times we live in, we all need to remind our souls to have hope and march on!” she says. The hand from Dear Survivor and the Rory Pots vase beneath represent Hannah’s affinity for supporting artists she’s met in person and virtually. 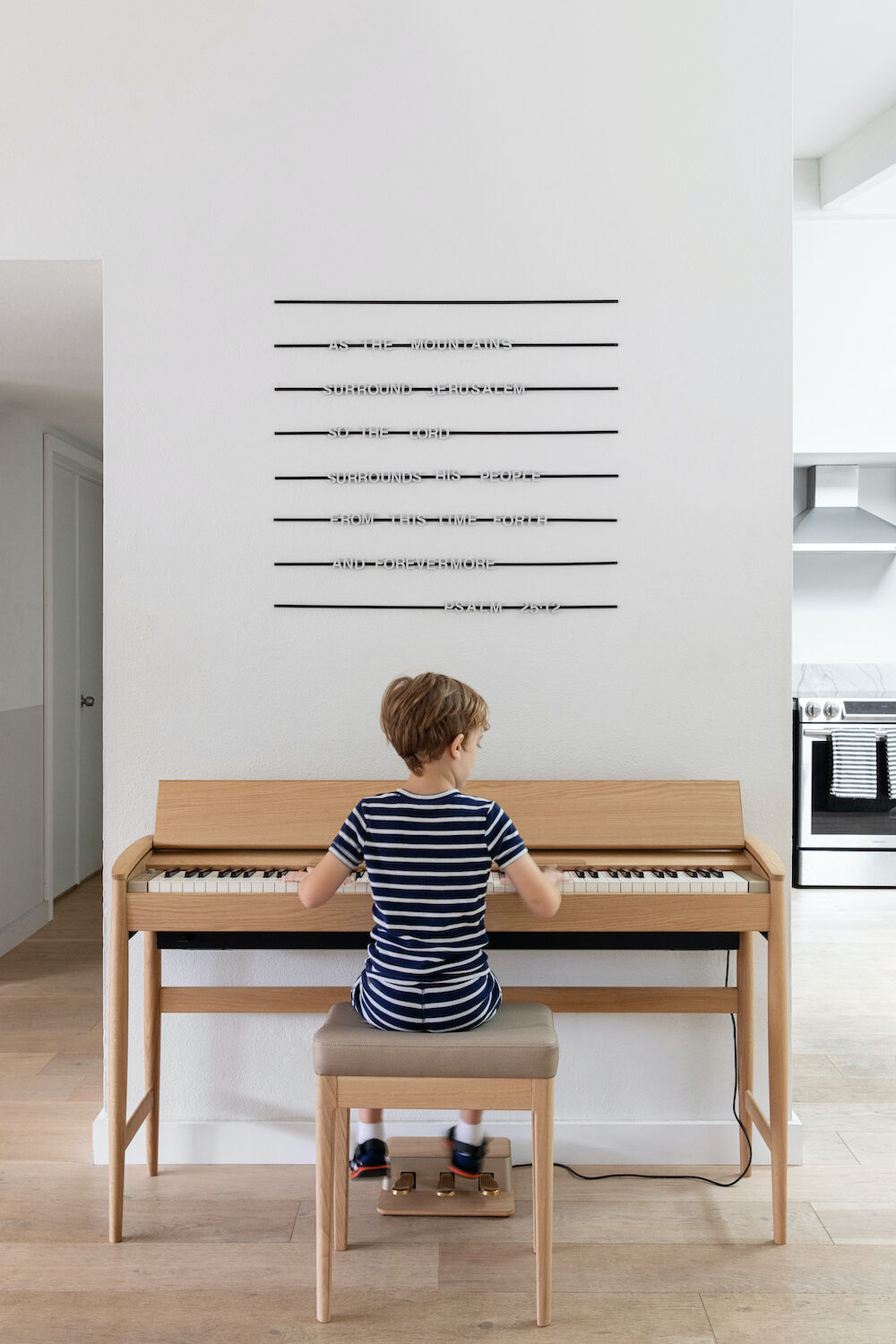 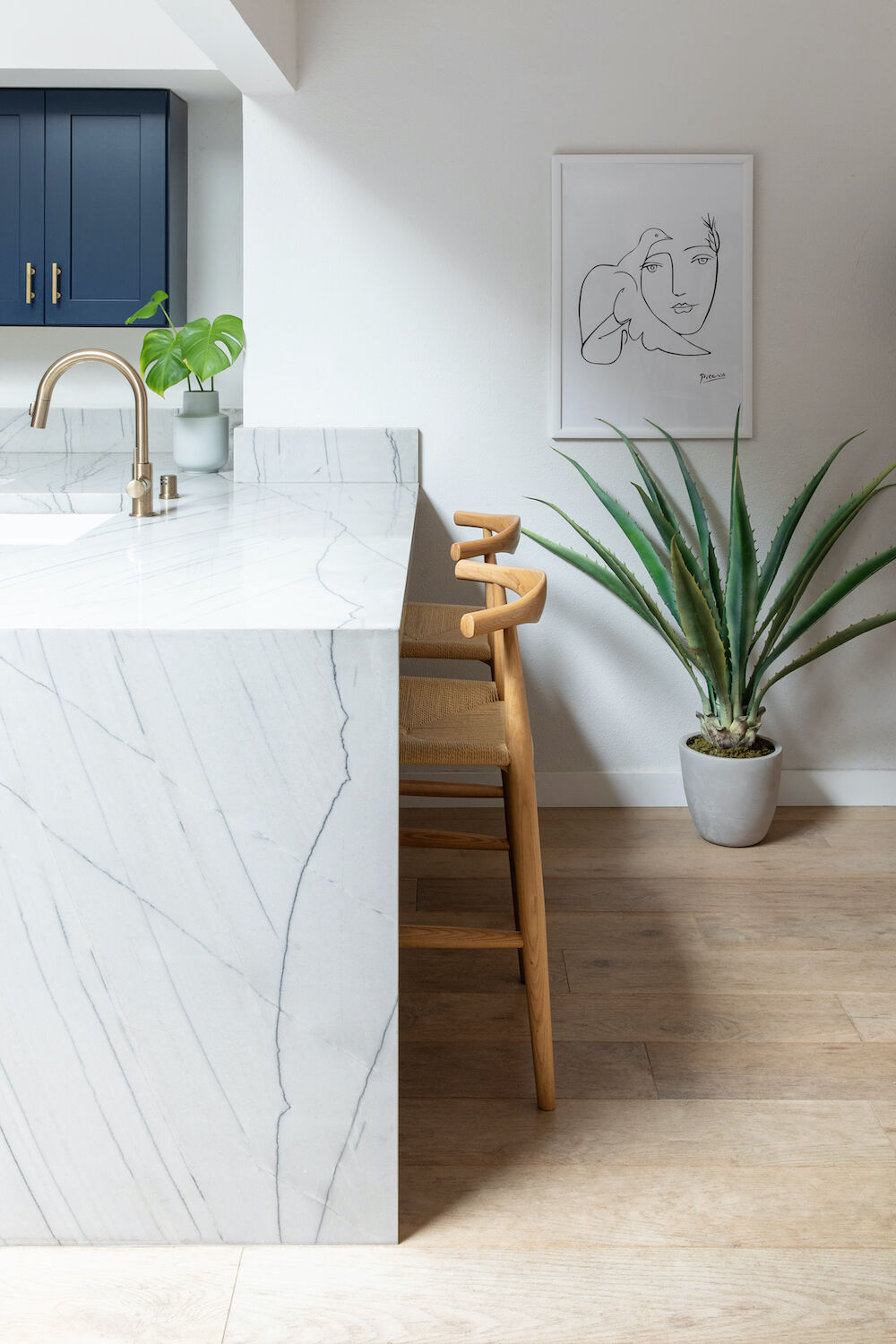 Jason and Hannah Weatherred were living in their eighth rental—a condo near the College Area / Rolando Village—with their three kids (Isaac, Justus, and Naomi) when they decided to put an offer in for a home on the other side of Interstate 8.

Hannah, originally from England, had seen that the home at the end of the cul-de-sac was up for auction. She’d peered into the windows, seen the vaulted ceilings, and knew it had just the right amount of space to host the students who attend Jason’s weekend sermons (he’s a college pastor).

“We put in a bid that was $40,000 less than the starting bid, but we sort of thought, ‘What have we got to lose?’” Hannah says. “We knew nothing about the condition of the home, but we started bidding with strangers over the phone. Next thing you know, everyone else stopped bidding, and we bought a house!” The home they won turned out to have been designed by architect William Krisel, who pioneered affordable midcentury-modern tract housing and designed several other homes in the neighborhood.

Hannah and Jason got the keys to their home a month later. The house, built in 1960, had sat vacant for three years prior to their purchase, so there was a lot of work to be done. Jason’s parents moved from Washington state, where he’s from, for six weeks to help the couple get their new home into a livable state. Since Hannah and Jason spent most of their money on the home, they intended only to repaint the interior and rip out the carpeting and tile throughout to replace it with wide-plank, light-oak flooring. When they started demolishing the floors and removing baseboards, however, they realized the home had some major damage.

The foundation was cracked, there was mold in the HVAC system, the electrical work was shoddy, and there was a 4 foot by 1.5 foot beehive inside one of the walls that was oozing black honey and harbored thousands of dead bees. Initially, Hannah planned for a purely cosmetic kitchen makeover—painted cabinets and new hardware—but the crack in the foundation crept under every existing cabinet, and the mold from the HVAC system spread to the upper cabinets. The kitchen needed to be completely demolished. With these unforeseen expenses, the Weatherreds blew through the money they’d budgeted for the renovation.

“My amazing in-laws offered to help us with the kitchen,” Hannah says. “My father-in-law even donned a hazmat-type suit to rid the kitchen of mold.”

With a blank slate in the kitchen, Hannah visited the dream list she’d been compiling in her head. It included navy cabinets, waterfall countertops made of marble, and simple brass knobs and pulls.

“I had a week to design, source, and order cabinets and appliances so we wouldn’t be without a kitchen for months,” Hannah says. “My father-in-law agreed to come back for the installation.”

Hannah, who studied fine art in college, went to work figuring out the kitchen. She measured the footprint, ordered a suite of appliances from Costco, and worked with Cabinets.com to map out and purchase her Shaker-style maple cabinets.

Aiming for a custom look without the custom price, Hannah opted for deep drawers rather than door-front cabinets in some spots, and she configured the cabinets on either side of the refrigerator so they’d be flush with the walls. Jason constructed a frame behind them so the cabinets sit only slightly back from the standard-depth fridge. And he and his father framed two pony walls—one holds the sink and dishwasher and allows for countertop eating; another created an oversized island to hold the trash and recycling bins and lots of storage.

Hannah didn’t like the look of manmade surfaces. She longed for unique countertops that suggested movement. She wanted natural stone that wasn’t too high maintenance. She was steered away from marble and fell in love with a gray-and-white quartzite with veining that looks like a painted mountain range.

“It reminded me of Yosemite Falls, and I knew it would make a beautiful statement in the open floor plan,” Hannah says. So she bought three slabs—enough for the countertops, the waterfall edges, and one entire side of the island.

Lighting came next. Though it was flooded with natural light during the day, the house became cavelike at night. Only two spots in the building were already hardwired for overhead lighting, and they were both in the family room. Since a six-week renovation often meant working late into the night, Hannah, Jason, and Jason’s father moved lamps around as they worked. Hannah bought sconces for the main living room first, then slowly added lamps, pendants, and recessed lighting throughout the home as their budget allowed.

Hannah’s first chandelier purchase hangs in her favorite room: her husband’s office, which also serves as a guest room. The modern six-light fixture brightens the vaulted wood ceiling, the only place in the home where the wood beams aren’t hidden behind drywall. To make the room larger, the couple borrowed space from the hallway and created a niche of open shelving.

In their room, Hannah and Jason spent several days during quarantine creating a feature wall behind their bed. She found a timber mill in La Mesa selling two-inch, light-toned hardwood dowels. The mill cut the dowels in half for her, and Jason cut them individually to ensure each would be level with the ceiling. Then the couple installed the dowels using a nail gun and hardwired pendants on either side of the bed.

“I lean toward minimal, European design,” Hannah explains. But she also likes to add something unexpected in every room. In the entry, she couldn’t find a wallpaper she fancied to create the statement she had in mind, so she made her own instead by painting the bottom portion of the wall a dusty rose color. In the linen closet, she removed the door, cleverly wallpapered the floor, and brought order to the towels and sheets with a system of pull-out mesh drawers. In the living room, a huge canvas waits for her hand to paint a masterpiece.

Outside, Jason built a wooden fence around the property, and the couple had help building retaining walls and a concrete basketball court in the backyard. They added a regulation-size hoop shortly after they moved in. “I joked that I didn’t have a kitchen, but my husband and kids had their court,” Hannah laughs.

In the front, Hannah continues adding to the home’s curb appeal. Drawing inspiration from their getaways to Palm Springs, she removed lots of concrete (she let her oldest son, Isaac, use a jackhammer) and created a sense of movement with large boulders, crushed rocks, and sculptural succulents and cacti. “I love that desert look,” she says. Shortly after they bought the home, the Weatherreds stripped lava-like rocks from the columns that sit on either side of the front door. But they didn’t have the columns and entry stuccoed smooth until this summer. They replaced the front door with a custom model and bought the matching garage doors, which open horizontally instead of vertically.

“My husband is six-foot-six,” Hannah says. “He wouldn’t be able to stand up straight in the garage if the door was overhead. But these doors each weigh, like, 500 pounds, so our neighbors helped us install them.”

Next on the to-do list is an overhaul of the garage, which doubles as the laundry room. Hannah ordered cabinets and designed a dowel system to install above the washer and dryer where she can hang clothes.

After that, she plans to remodel each of the bathrooms. “They are low on the priority  list,” she says. “It might be a few years before we get to them.” In the meantime, she made cosmetic changes to the hall bath, replacing the builder-grade mirrors, light fixtures, and faucets, and adding hardware to the existing vanity.

Though they’ve made progress—and even rent out the complete rooms for photo shoots and filming—the to-do list never ends. “I’d love to have my home done,” Hannah says. “But I’m working on enjoying what I have and not worrying about what I don’t.”