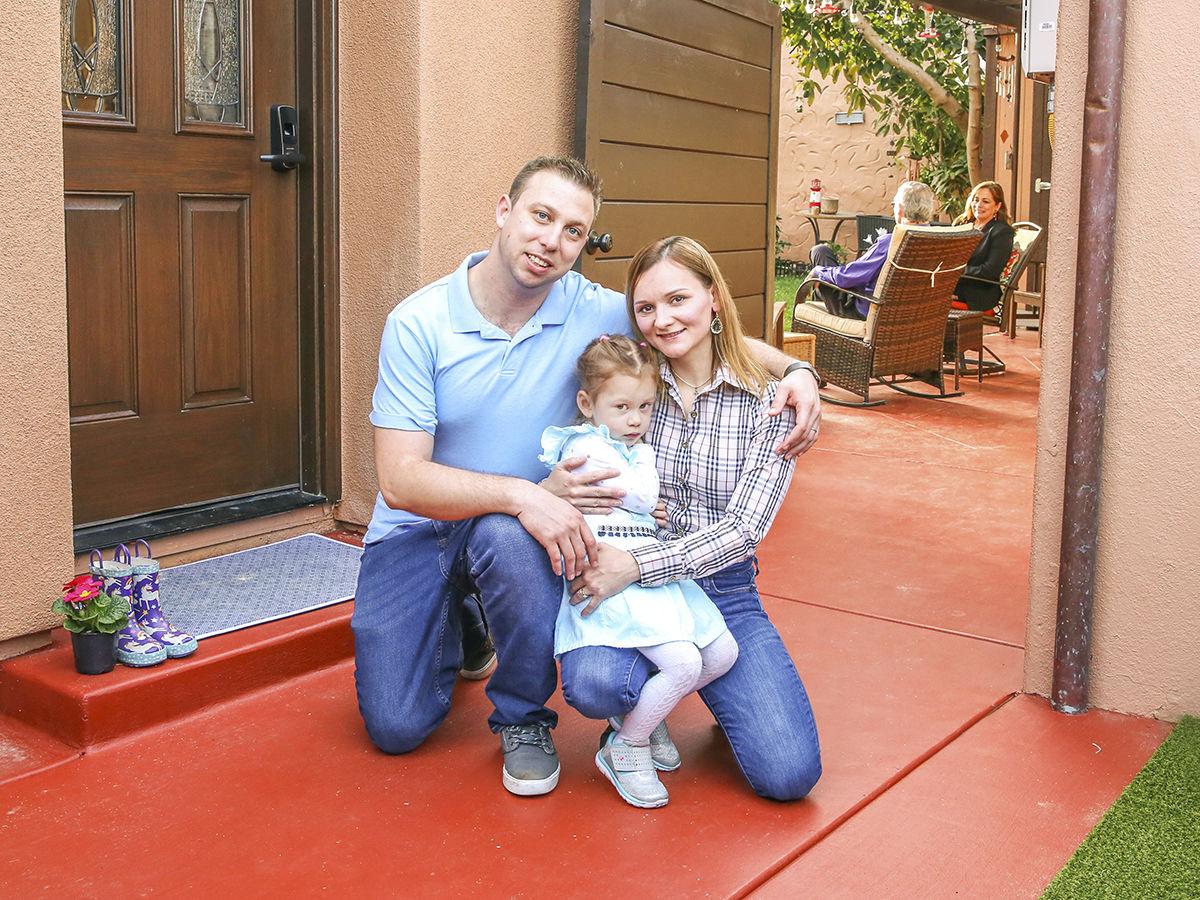 Steven, Tatiana, and their daughter, Elizabeth 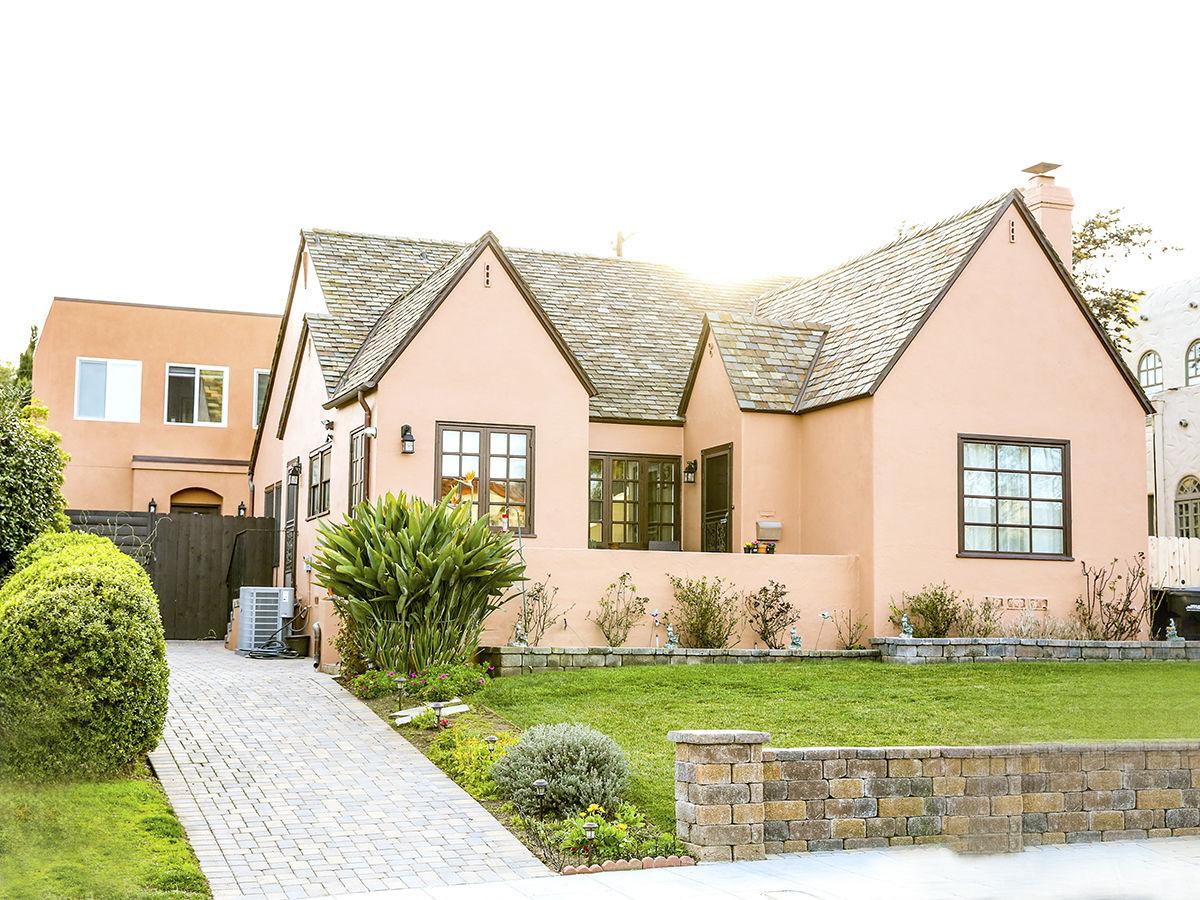 On the right stands Stephanie and Don's original house with Tatiana and Steven's recently constructed ADU to the left. 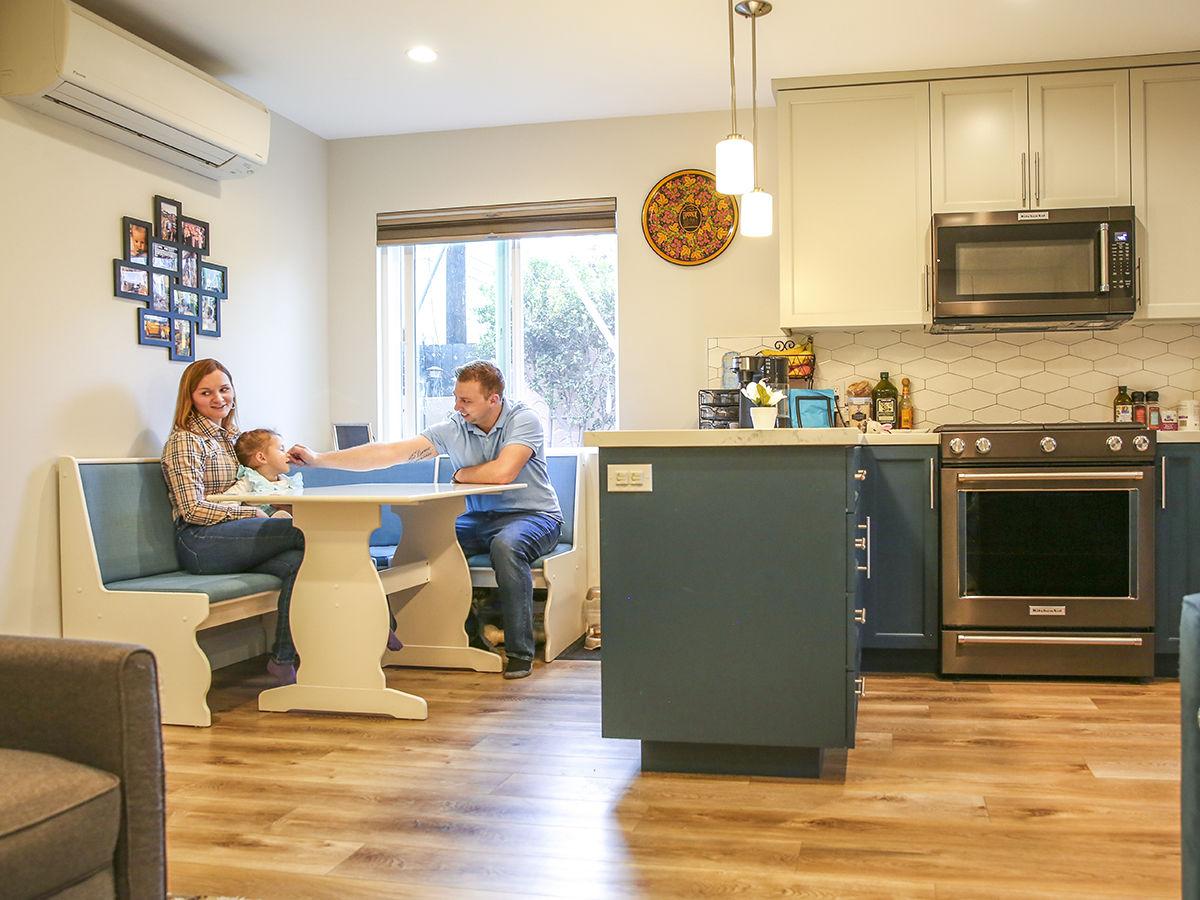 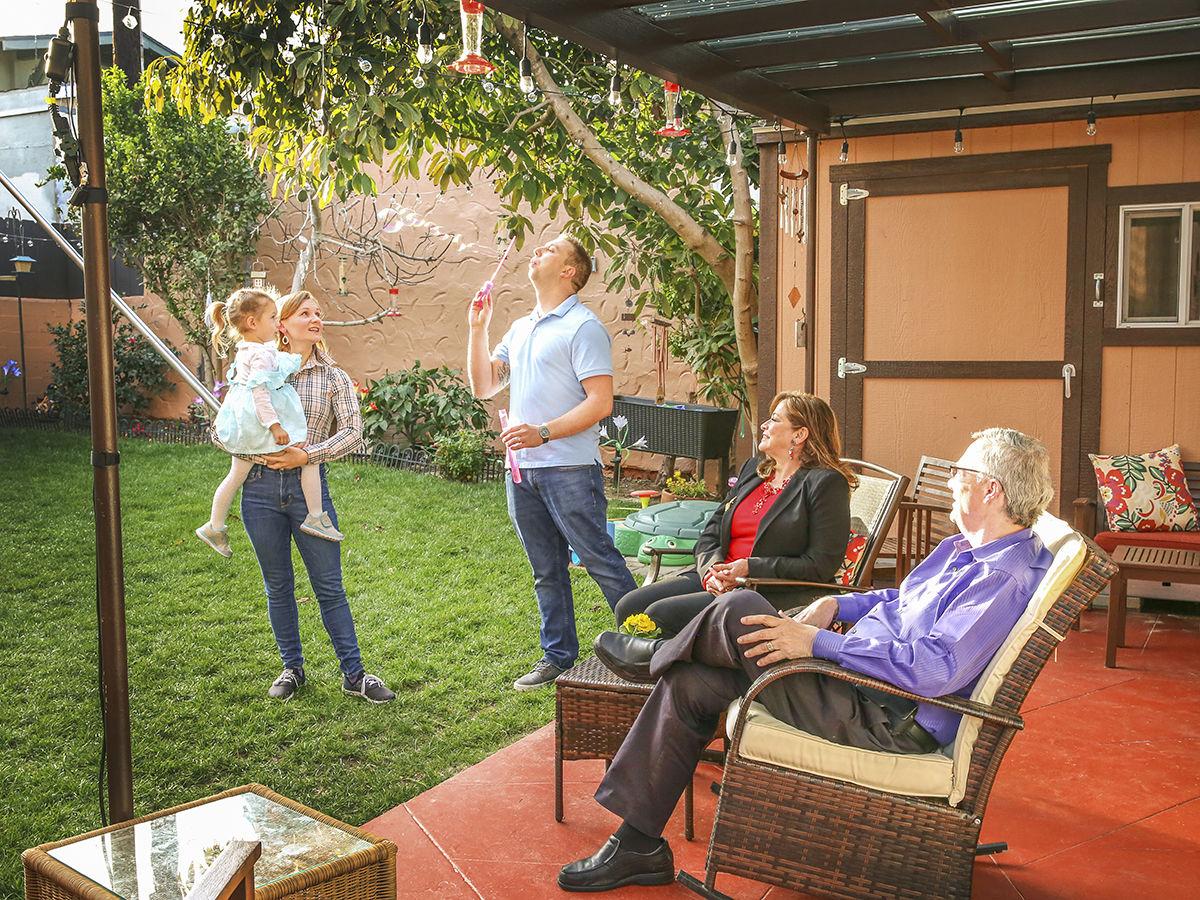 A new spin on an old idea has emerged as a possible answer to San Diego’s affordable housing issues: building more accessory dwelling units. Also called granny flats, casitas, or companion units, ADUs are a second small home or apartment on an existing single-family lot separate from the main house. Nationally, ADUs have been touted as a fast and affordable way to increase the housing stock in cities, but for many years it wasn’t easy to build one in San Diego. New state and local laws enacted in 2016 radically changed this, and in 2018, the city of San Diego rolled out permit-ready blueprint guidelines for homeowners to build an ADU on their property, and drastically reduced the fees to do so.

“Depending on the size and type of construction, and permitting and inspection costs, recovery fees can be as low as $2,000 per application. Previously, the cost was between $20,000 and $30,000,” says Gary Geiler, deputy director of San Diego’s Development Services Department.

The building trend is catching on. In 2016, the city received only 19 applications from homeowners wanting to build an ADU. In 2019, nearly 600 came in. Geiler says this boom has been happening citywide, and they anticipate issuing 400 to 500 more permits this year.

The Starks family in Point Loma took advantage of the new laws and is now a model for how the ADU living situation can work. Steven and his wife, Tatiana, and their three-year-old daughter, Elizabeth, live in a small two-story home that was built on Steven’s parents’ lot.

Steven and Tatiana met when they both lived in Guangzhou, China, working in the Chimelong Circus—he as a springboard diver, she as an aerial gymnast. They got married, and when Elizabeth was about a year old, they moved in with Steven’s parents, Don and Stephanie.

As the couple searched the county for a home to buy, they had found a townhouse in La Mesa that was within their budget. But Steven says when he looked into getting a loan and started crunching the numbers, the townhouse would’ve been costly in other ways: a long commute, childcare, taxes, HOA fees. And since the Starks are a literal family circus, they had a unique requirement for their new home: a backyard that could accommodate a 13-foot-tall aerial rig that Tatiana uses to practice (without a safety net) when she’s not coaching at the San Diego Circus Center. “You know how HOAs are; they’re not going to let anyone have that in their backyard!” Stephanie jokes.

Steven says the inspiration to build an ADU happened during a moment of frustration, when he thought, I’ll just live in the garage. He started doing research and found news articles about the city eliminating the development fees to build an ADU. When he fell down that rabbit hole, he discovered that demolishing the garage in his parents’ backyard and building a self-sufficient, two-story home in its place would cost just 30 percent as much as purchasing the La Mesa townhouse.

It required a construction and remodel loan—significantly less than a loan for a $400,000 home. “At first, I didn’t want it to make sense, and I didn’t want to do it,” Steven admits. “But this was the best option to avoid being house poor in San Diego.”

Gregg Cantor of Murray Lampert, a design-build firm that specializes in building ADUs from the ground up, demoed the garage and designed a 956-square-foot home for the young family. “There’s no shared kitchen and no shared laundry. We already did that for two years,” Stephanie laughs. The home has its own entrance, and there’s a gate dividing Steven and Tatiana’s front door from their parents’ patio. “Sometimes I won’t see them for a few days at a time,” Stephanie says. And since they built up, there’s still plenty of room in the backyard for the aerial rig.

After more than six months of construction, Steven and Tatiana moved into their new home in September 2019. He says he’s happy with his decision and thinks it was the right one. “I guess I just had to go big, to go home.”

Five Things to Know about Building an ADU

Whether you’re interested in building a granny flat for a family member or to rent out for additional income, here’s what to know before you get started.

While laws have been passed at the state level allowing ADUs, some of the measures are voluntary and each city can choose which they want to adopt, according to Gregg Cantor, president and CEO of Murray Lampert, a firm that has been at the forefront of building ADUs in San Diego. Encinitas has preapproved blueprints and building plans for ADUs on their website at encinitasca.gov/pradu. The city of San Diego accepts Encinitas’ building plans, as well as the permit-ready plans issued by the county at sandiegocounty.gov.

Make sure the job can be done.

Cantor says that over the past year and a half, more than half the calls he gets are from people inquiring about building an ADU on their property—but only one out of ten prospective projects can come to fruition, because of zoning laws or issues with underground electricity and gas lines. First, make sure your property is zoned as a single-family residence. Also, keep in mind you may be required to provide a parking spot for the second dwelling. Familiarize yourself with the county’s zoning ordinances at sandiegocounty.gov.

“Don’t give someone money upfront,” Cantor says. The right company will make sure that building an ADU is feasible and will do a recap of your goals with you, he says. “They shouldn’t charge until they know that they can do it.”

If you dream of running your own little B&B on your property, you can’t do it with an ADU—they’re not allowed for short-term vacation rentals. If you plan to rent it out for extra income, you have to lease it for at least 30 days at a time.

More in The Future of Housing in San Diego