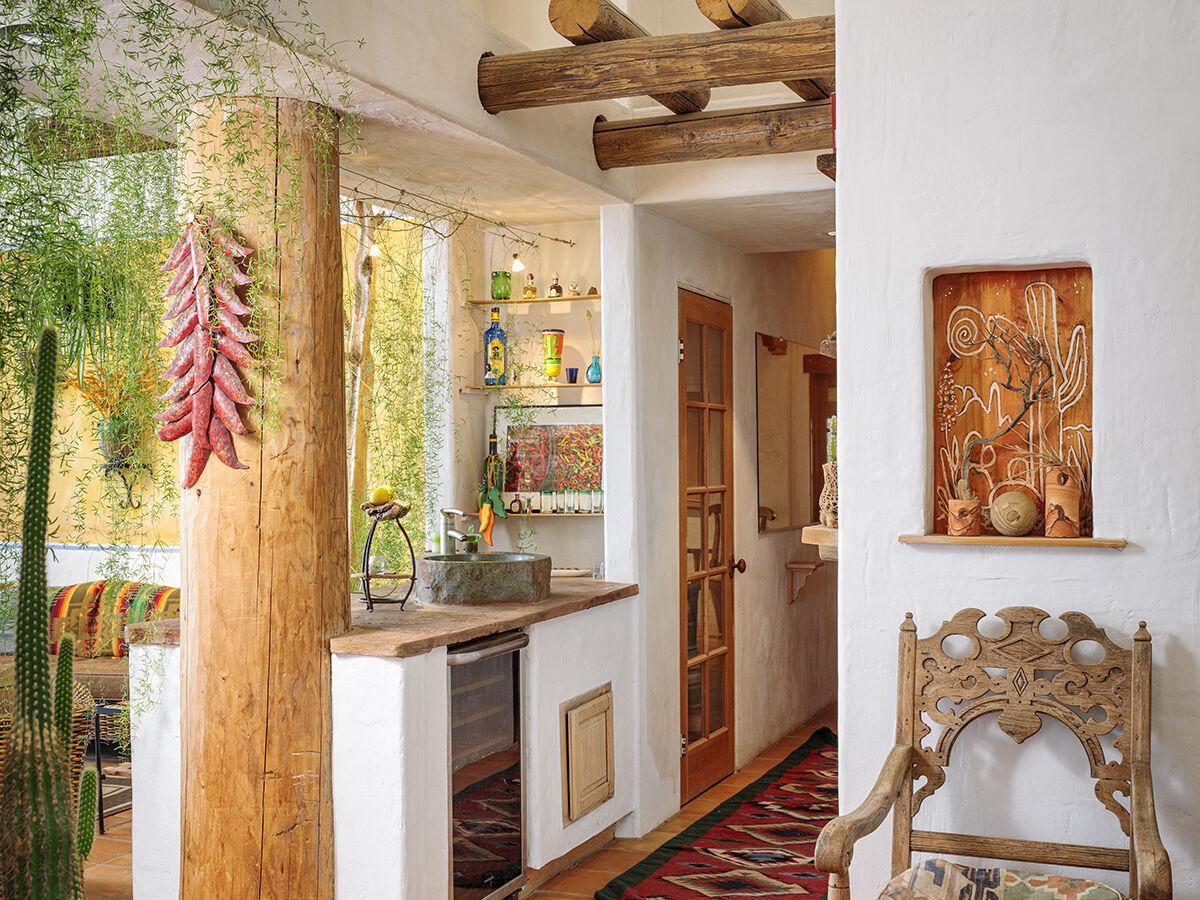 Step inside Faulder’s home and into his main living space, where greenery takes over. The asparagus fern, which veils the view between the wet bar and sitting area, grew in his parents’ yard and his brother’s yard before moving to San Diego with him. “I have a special connection to it, and with the lights shining around it at night, it’s gorgeous,” he says. 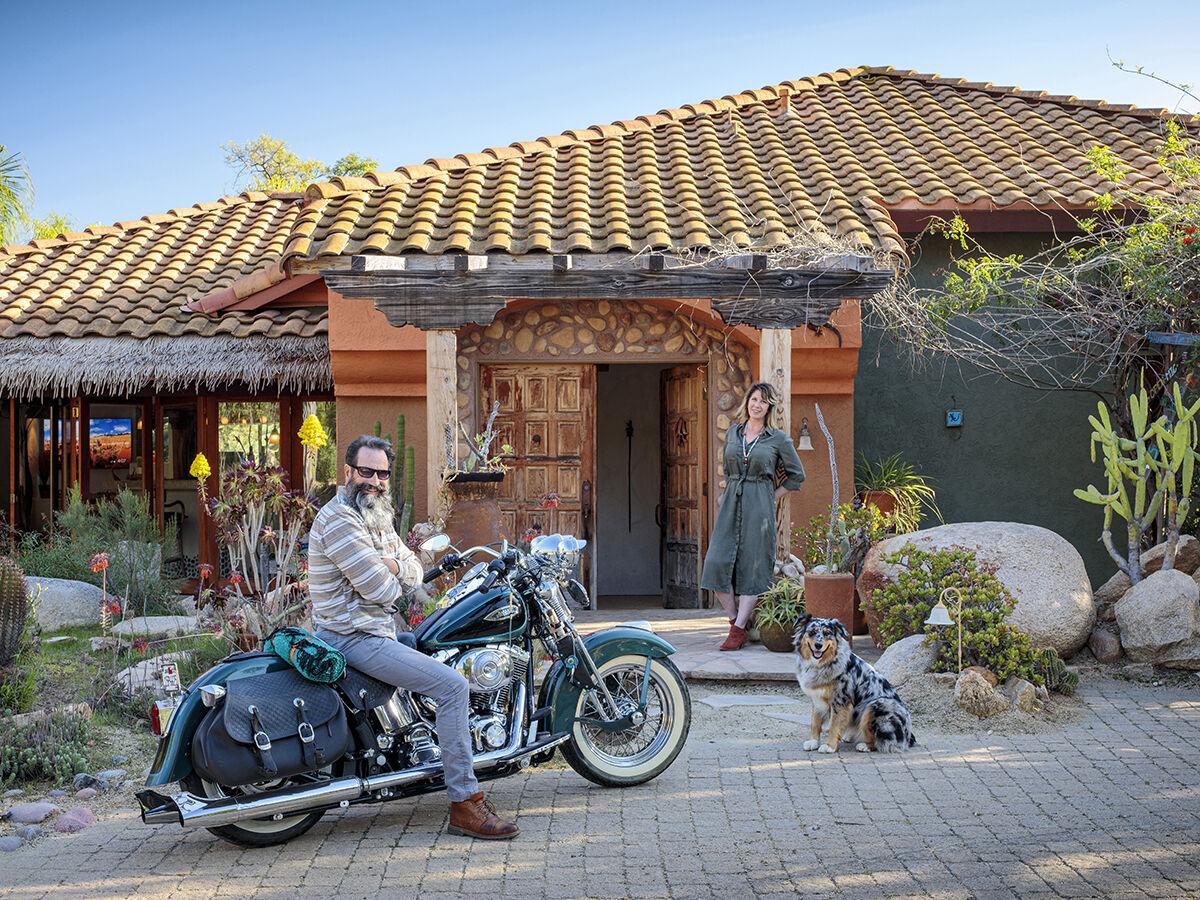 Faulder, his girlfriend, Molly Winjum, and his dog, Sedona 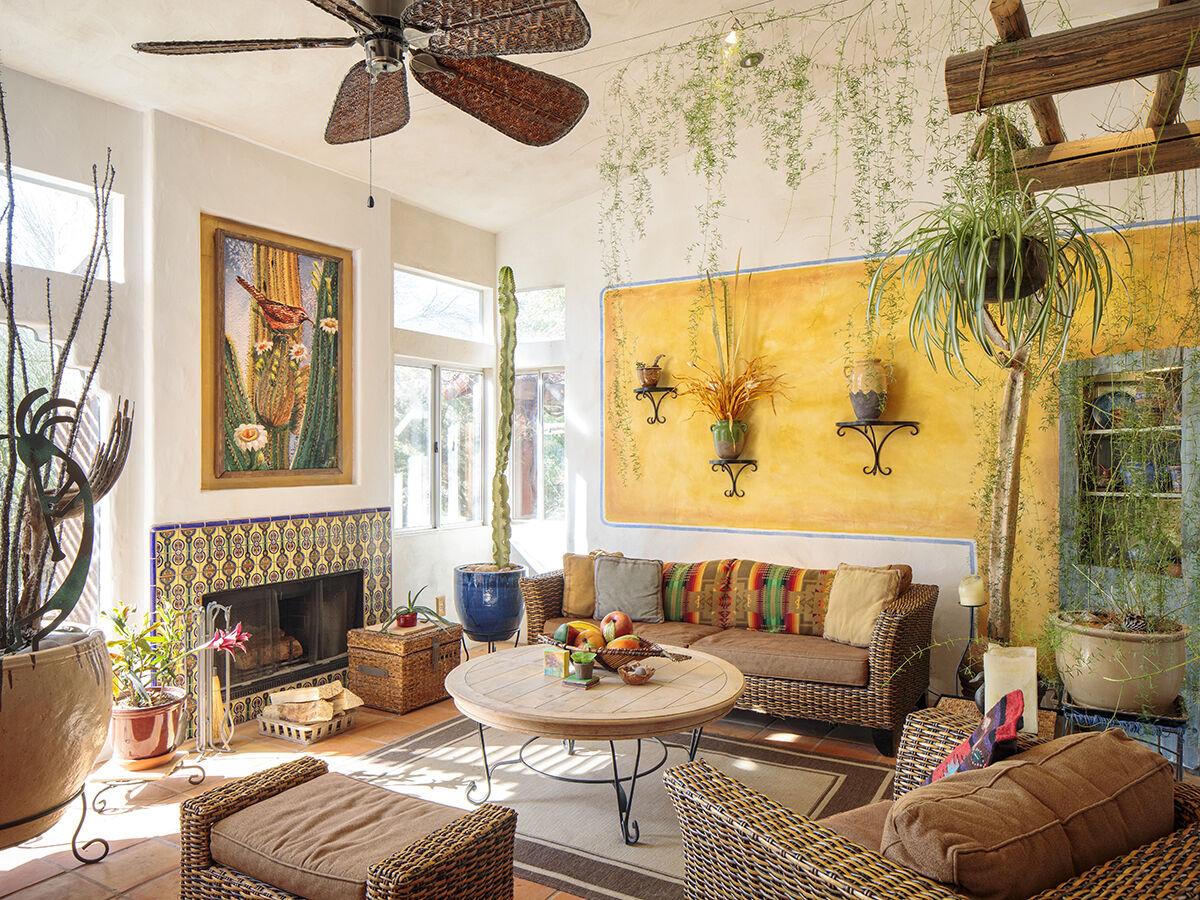 Faulder also found design inspiration on visits to Mexico. “I’d see something in the architecture down there, and I just knew I wanted to incorporate it somehow into my house,” he says. And that’s apparent in his sitting room, with its hand-painted tiles around the fireplace, yellow accent wall, and textiles and pottery filling the space. 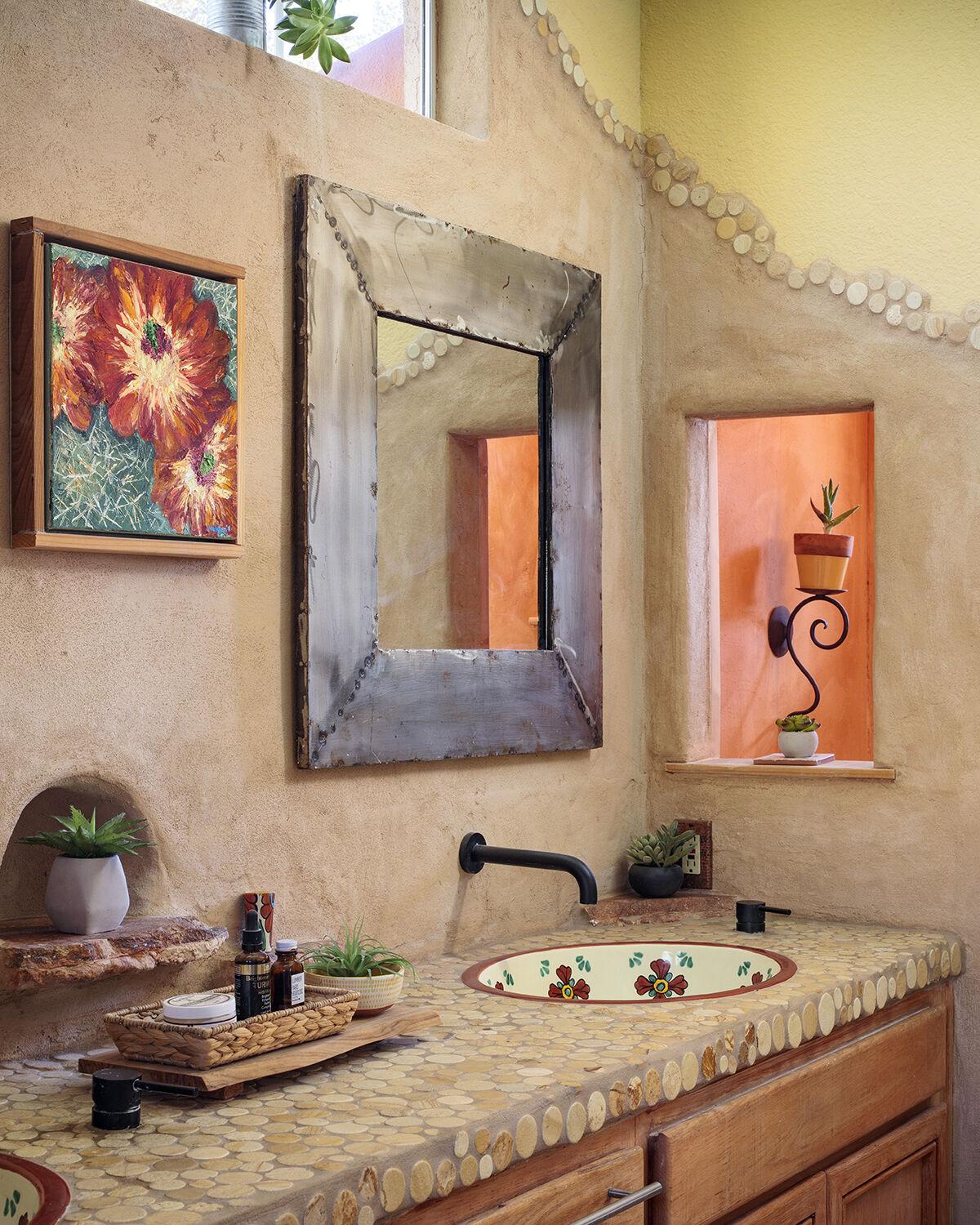 Faulder purchased some of his favorite items from side-of-the-road vendors in Mexico—one being a custom granite table for his patio. But strong winds tipped the umbrella in the center, and the table smashed to pieces. “I had these hunks of rough granite with nice edging, so I turned it into shelving for the bathroom,” he says. “That’s how I get a lot of the details in the house.” 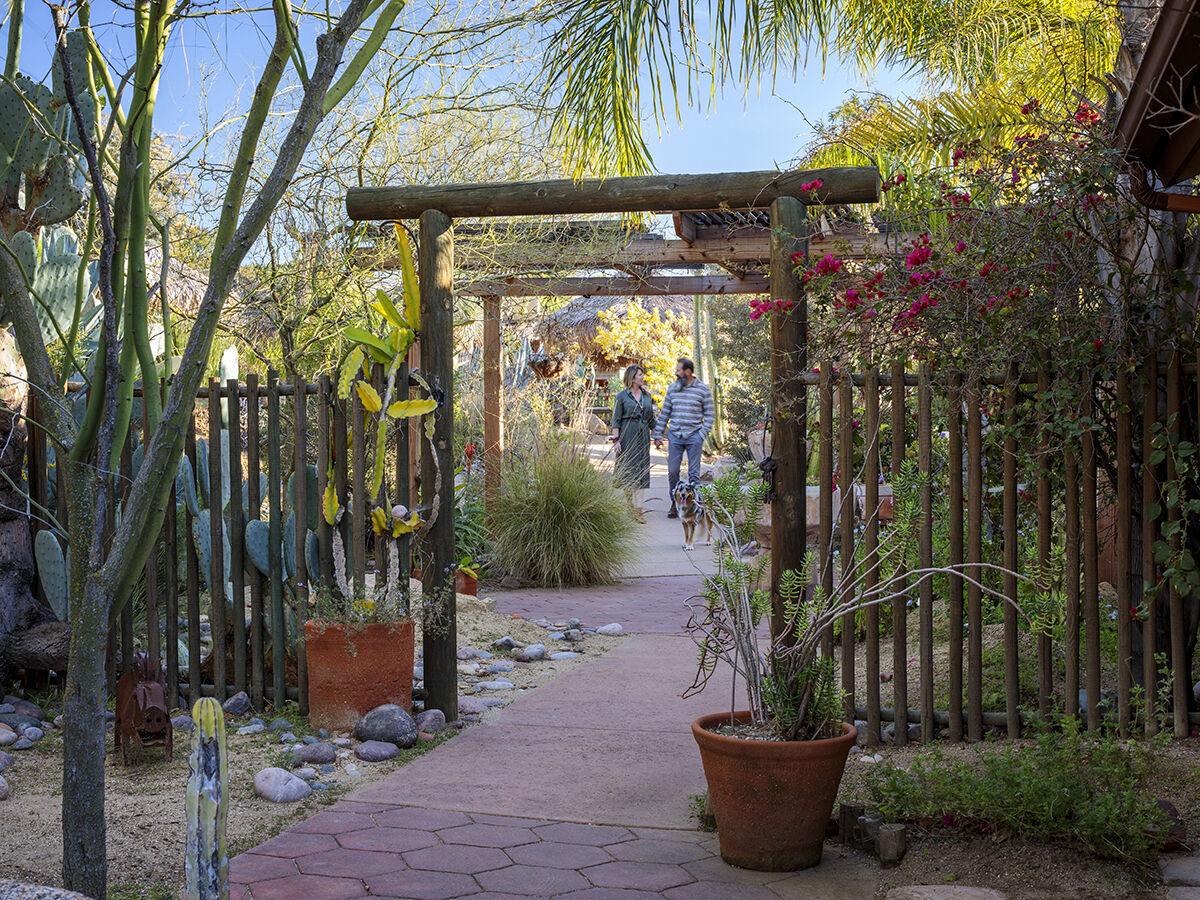 Faulder, his girlfriend, Molly Winjum, and his dog, Sedona, walk along one of the many paths on the desert property. This one leads into the home or up a gentle hill to the pool. He has intimately and intentionally set every stone and plant in a way that makes the entire landscape a welcoming retreat. And he’s created places for pause and reflection at each turn—from the pool and the pond to the courtyard and the deck.

James Faulder is a lot of things—a retired lawyer, a mountain climber, a musician, a motorcycle enthusiast, a DIYer. One thing he is not, however, is a planner.

“I do a lot of things on a trial-and-error basis,” he admits. That includes remodeling his home and its surrounding four-acre landscape in Jamul. Walking through the property with its meandering paths, pond, covered deck, outdoor studio, and trailer guest house, one would never guess Faulder did it all kind of haphazardly. Every detail appears so intentional, so meticulously placed, and he did it all almost entirely by himself.

Originally from Silicon Valley, Faulder moved to San Diego for “the fun, the sun, and the beach.” But he found himself gravitating farther and farther east, where the desert dominates the Southern California vistas.

“I’ve always liked the Southwest adobe dwellings and the California hacienda look,” he explains. He wanted his home to blend in with its surroundings, to emphasize a harmonious relationship between architecture and nature.

So that’s where he started, carefully camouflaging his home to give nature its due. Without knowing what he’d replace it all with, Faulder uprooted anything that wasn’t drought tolerant, along with any vegetation that didn’t fit the topography. He relocated plants and used a heavy-duty rope and his car bumper to unearth stubborn palms with fibrous roots.

Faulder found inspiration for his home’s landscape during frequent trips to Arizona. He’d drive through different neighborhoods and find homes that effectively blended in with the surrounding desert. He liked how decomposed granite and native stones delineated walkways, driveways, and other paths, and he was taken with the dozens of varieties of cacti that thrived in the arid climate.

“Large cacti can take 100 years to mature, and I didn’t want to have to wait,” he admits. Faulder purchased some well-aged species from area nurseries. “Others I got because I’d boldly walk up to a house, knock on the door, and ask for a cutting. I’d start talking with the homeowner and end up buying a tall cactus right out of their front yard. One lady told me I could have everything in her yard as long as I dug them up and hauled them away. I became known as the cactus guy.”

This cactus guy piled his acquisitions—which also included yuccas and smaller succulent cuttings—in his driveway until he could figure out the perfect placement. Before committing and digging a hole for one of the larger cacti, he’d place a shovel where he thought he wanted it to go, then “live with it for several days and examine it from different points on the property,” he says.

Once his vision started taking shape, Faulder spent weekends on a rented Bobcat adding dimension to his flat landscape. He recycled earth, gravel, and boulders from elsewhere on the property to give the terrain an organic sense of belonging and then strategically planted the cacti, trees, and plants to look as though they’d been growing there forever.

Inside, Faulder ripped out carpeting, removed heavy draperies, and demolished anything that gave off a Mediterranean vibe. Celebrating the land where his home is nestled and incorporating the Southwestern and Mexican styles he favored took priority. He brought in natural elements (sometimes wood or stone he found on the side of the road), rounded harsh edges, and incorporated tile in the same way he added plants—bought what he liked, piled it up, tested it, then adhered it.

From the numerous entry points around the house to the material selections, the indoor-outdoor transitions are seamless. He replaced windows with doors and brought plants in everywhere, including a thriving asparagus fern that has been in his family for over 20 years. Beyond that, he kept things relatively simple.

“I’ve climbed mountains all over the world, and I’m amazed by how others live,” he says. “In Nepal, for instance, there’s so much ingenuity and creativity that goes into their homes. They don’t have much, they use what they have, and they don’t worry so much about perfection. Crooked adds character.”

It’s a philosophy that Faulder adopted during his own DIY undertakings. He’s turned planters into tables, fashioned found sticks into art, and repurposed a broken table into shelving in the primary bathroom. He’s even found beauty in his mistakes. “The things I’ve done incorrectly have actually given me the most confidence,” he explains.

The kitchen countertops happen to be one of these confidence-building snafus. Faulder removed the original square white tiles and built a frame using plastic landscape liners. He poured in fast-drying concrete—and it lived up to its description. Air bubbles and trowel marks peppered the entire surface, and when he pulled off the plastic liner frame he created, concrete came with it and made for very uneven edges.

But he found the mishap kind of cool. So he filled holes with small tiles he had on hand and bought grout the same color as the concrete to smooth around the edges. “It kind of looks like something old and chiseled that I spent tons of money on. It’s rustic and natural, and it’s a mistake I could never replicate.”

So he tackled other, more difficult projects. He made a concrete bar in what was once the garage. And in the last year, he built a yoga deck, turned a trailer into a guest house, framed an outdoor gym, and made a pond, which was the most labor-intensive but gratifying task to date.

And he’s still not done. Faulder still needs to finish the primary closet and a second bathroom inside. As for outside? “It’s like mountain climbing. It’s hard, and when I’m in the midst of it, I say, ‘What the hell was I thinking?’ But as soon as I’m down, I can’t wait to climb the next. That’s how these projects are. I’m never satisfied. I’m always trying to deepen my connection to nature, and I’m doing that with this home.” 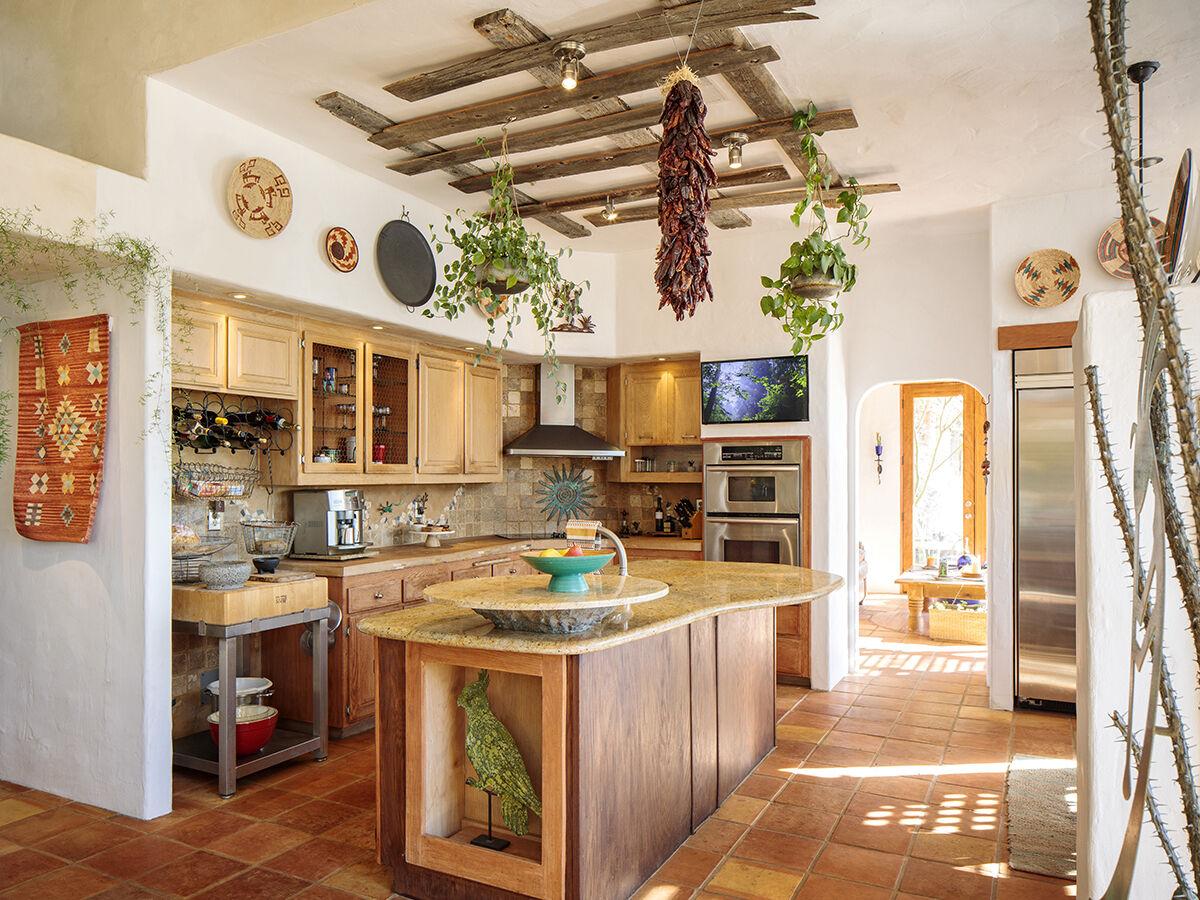 Faulder added character in the kitchen with a rustic ceiling installation where he hangs plants and peppers. 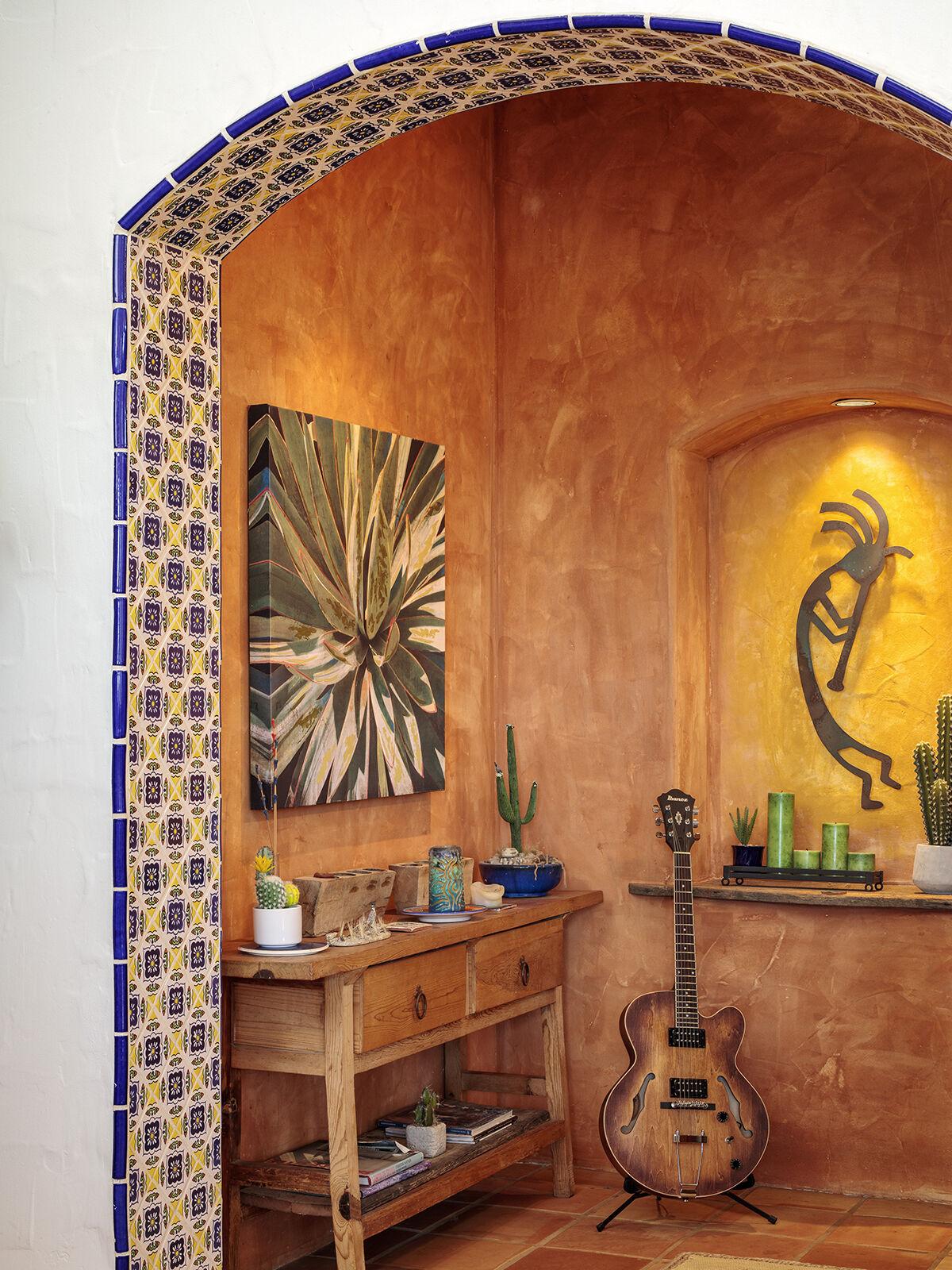 In the vestibule outside his bedroom, he created a tiled archway, carved out an inset shelf, smoothed the walls, and painted them a clay color. 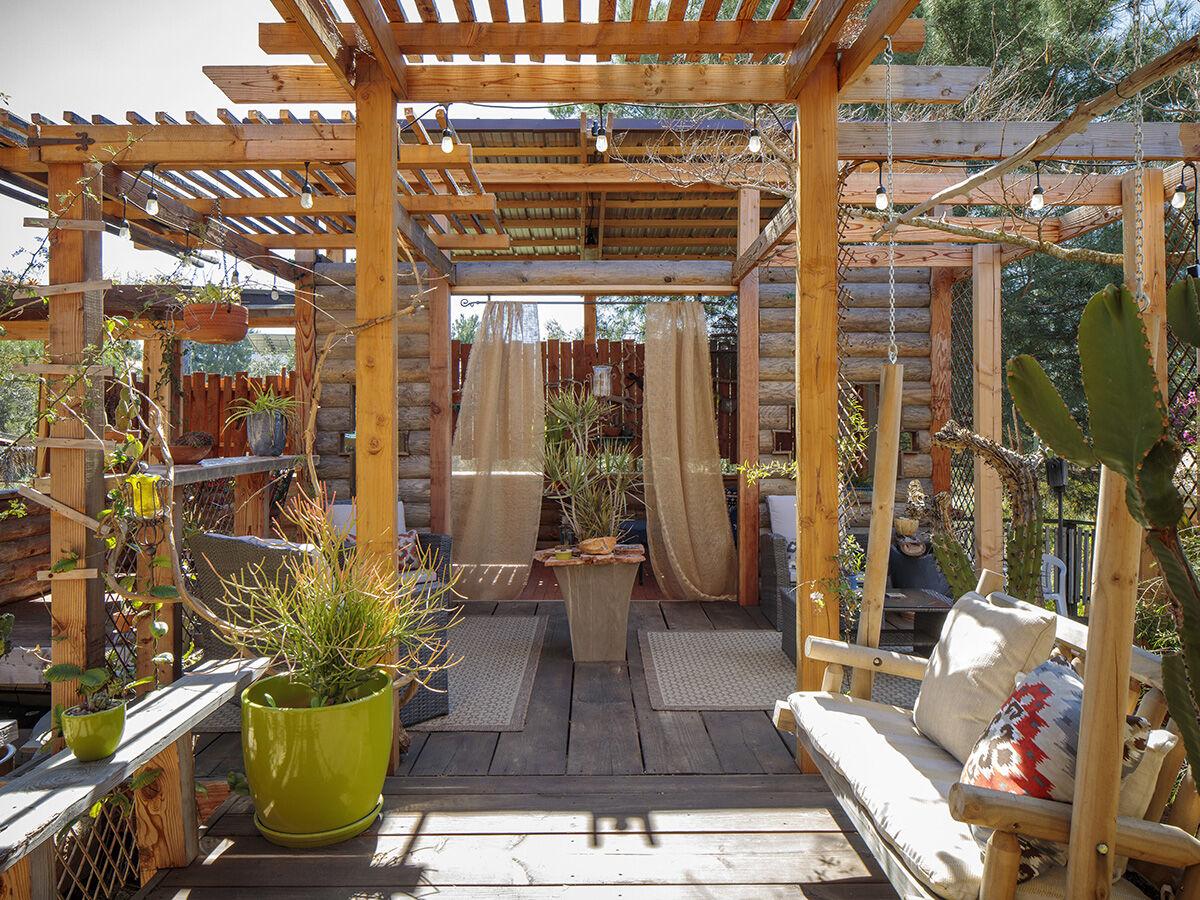 Outside, Faulder built a deck for yoga and meditation. 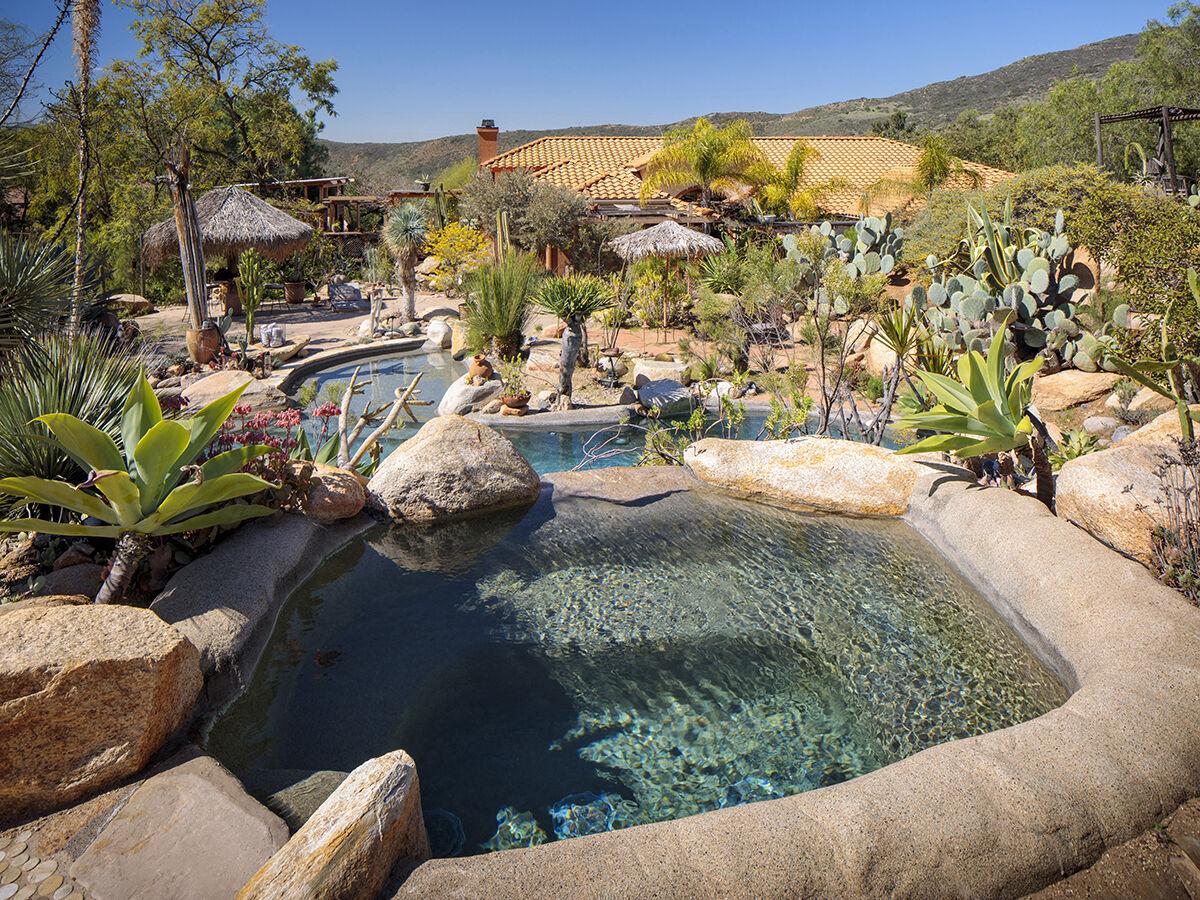 He helped design a pool and spa to be the oasis of his desert landscape.

Faulder added character in the kitchen with a rustic ceiling installation where he hangs plants and peppers.

In the vestibule outside his bedroom, he created a tiled archway, carved out an inset shelf, smoothed the walls, and painted them a clay color.

Outside, Faulder built a deck for yoga and meditation.

He helped design a pool and spa to be the oasis of his desert landscape.