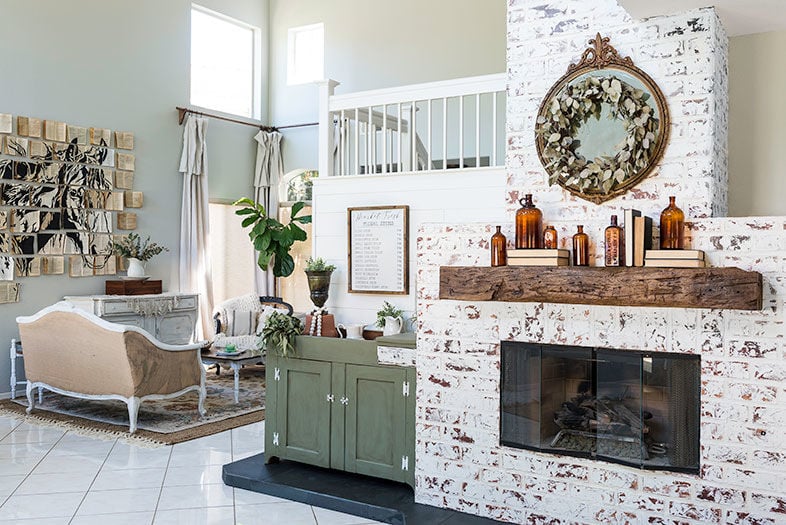 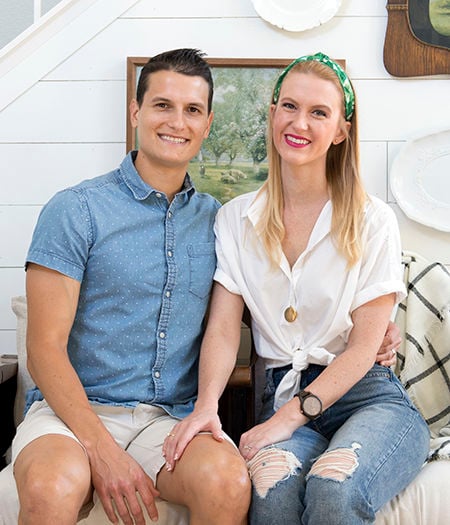 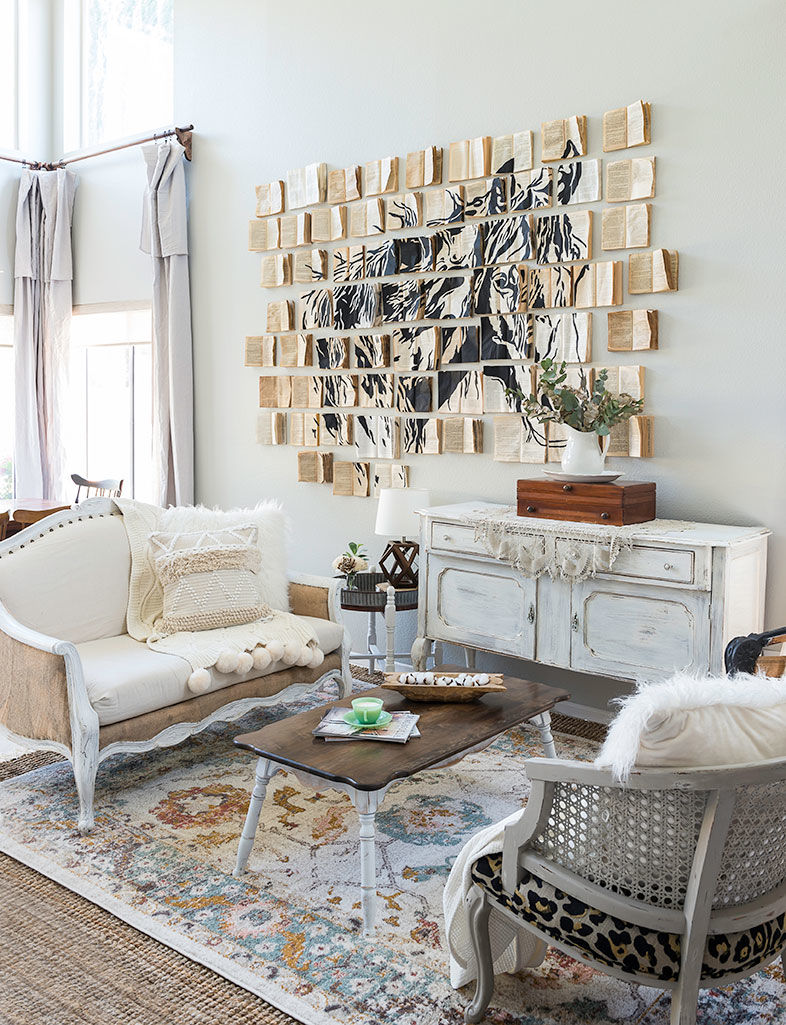 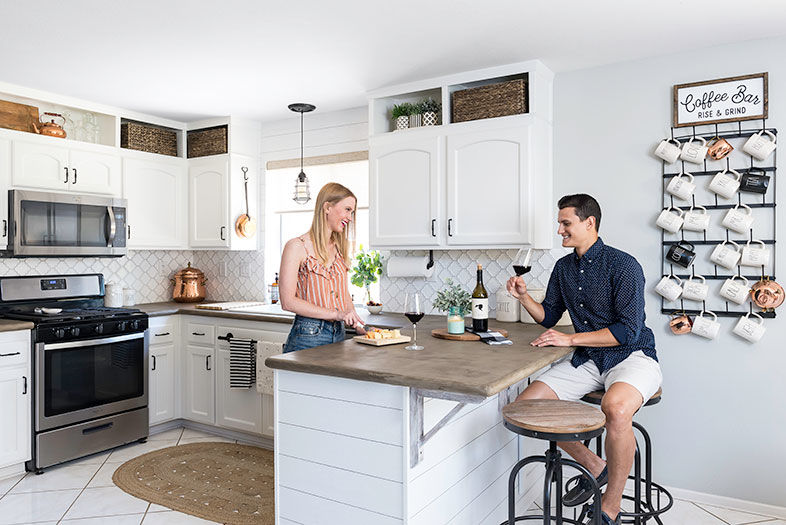 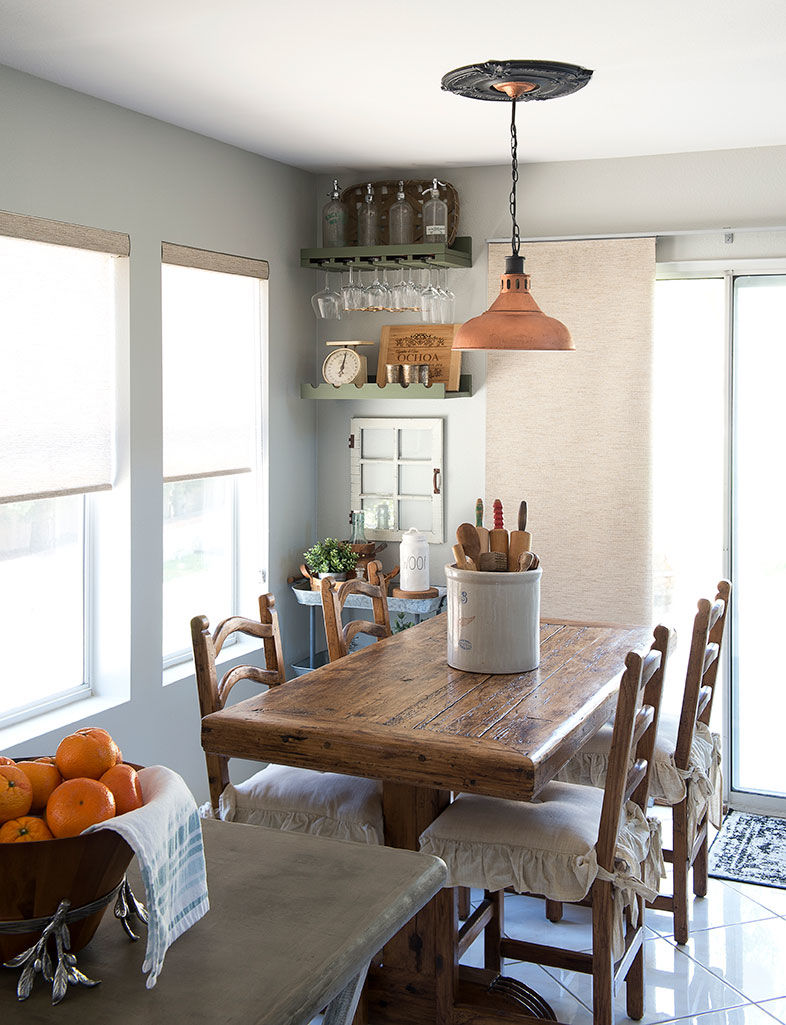 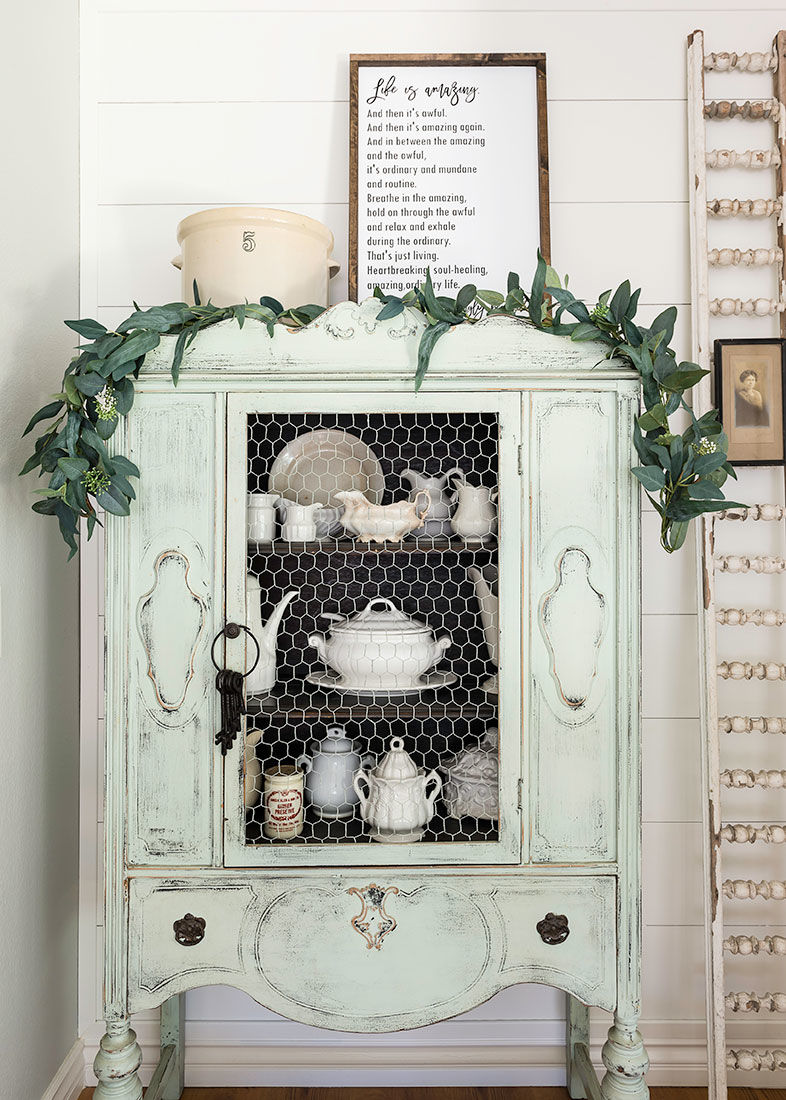 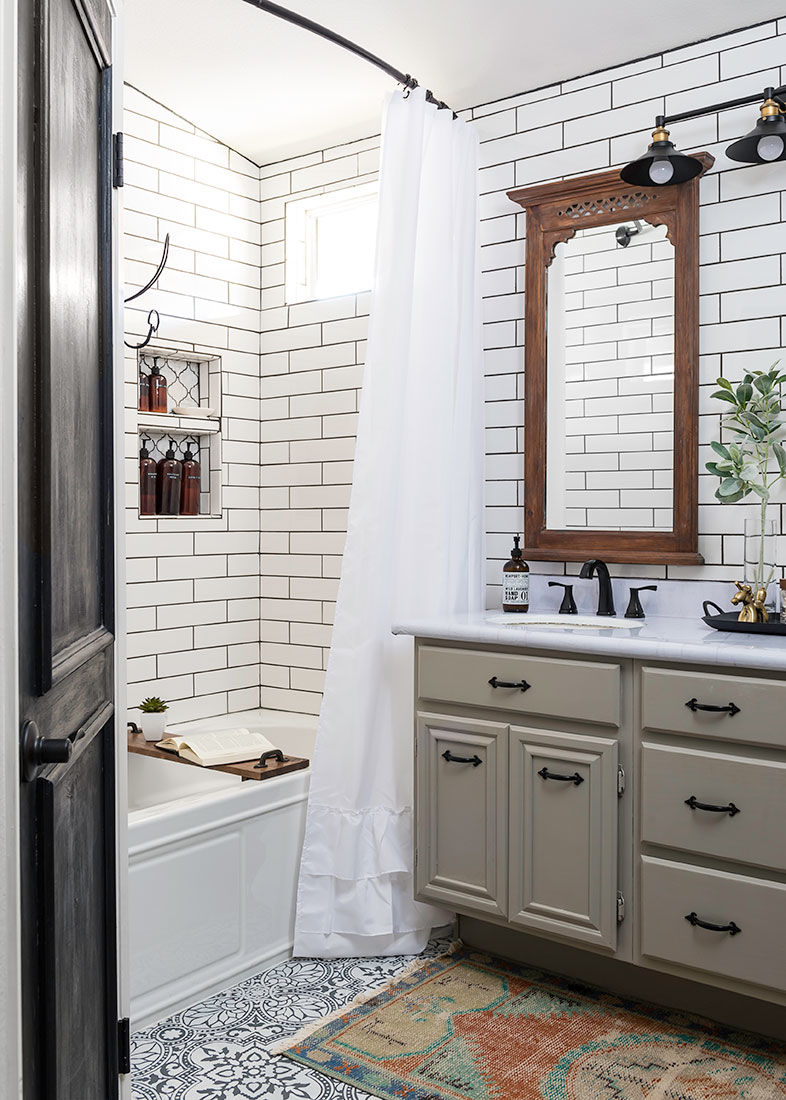 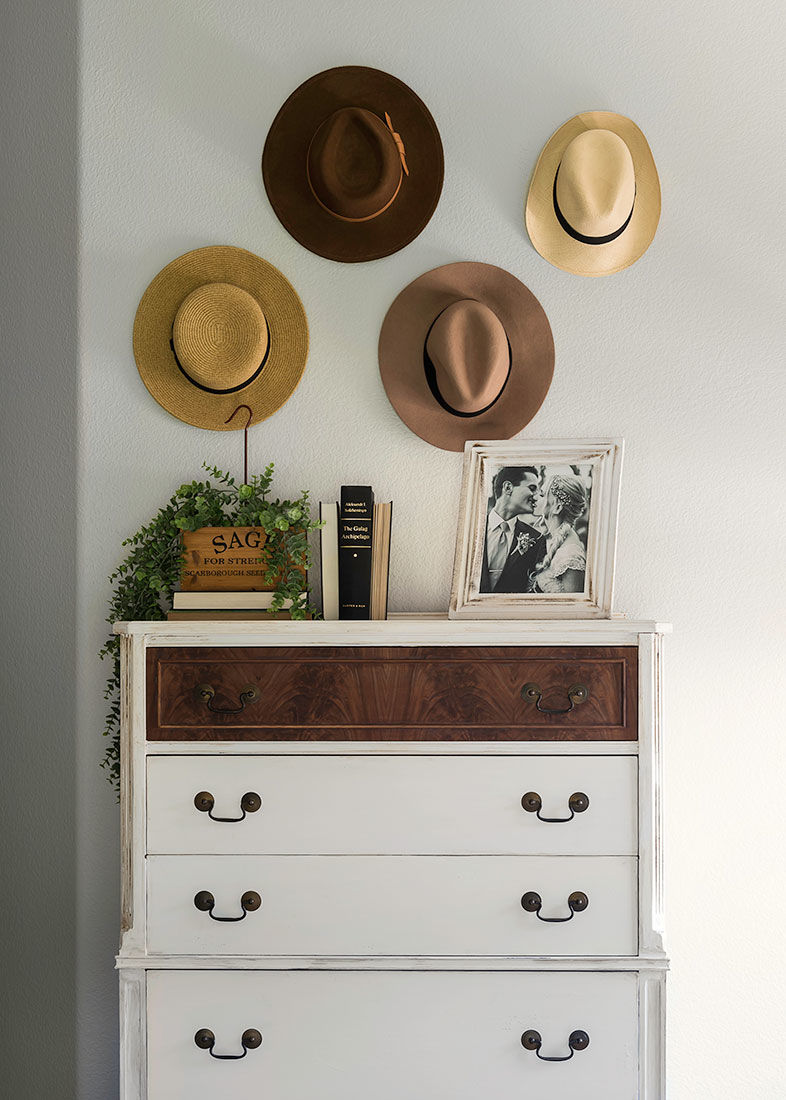 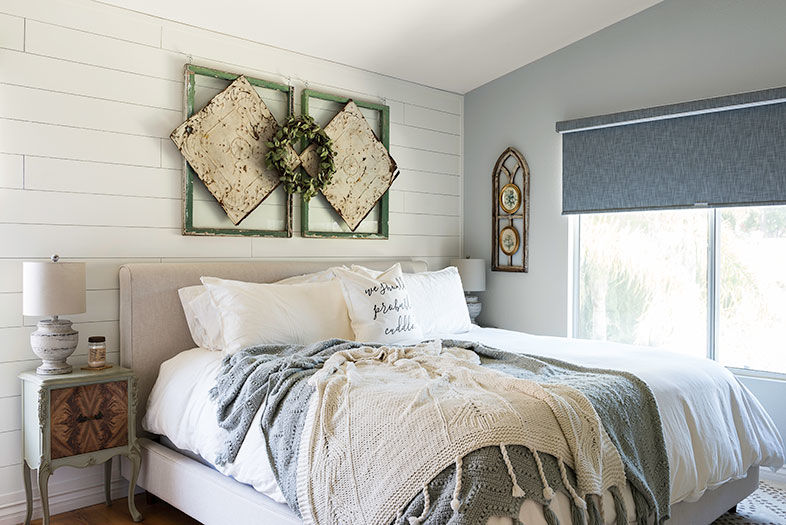 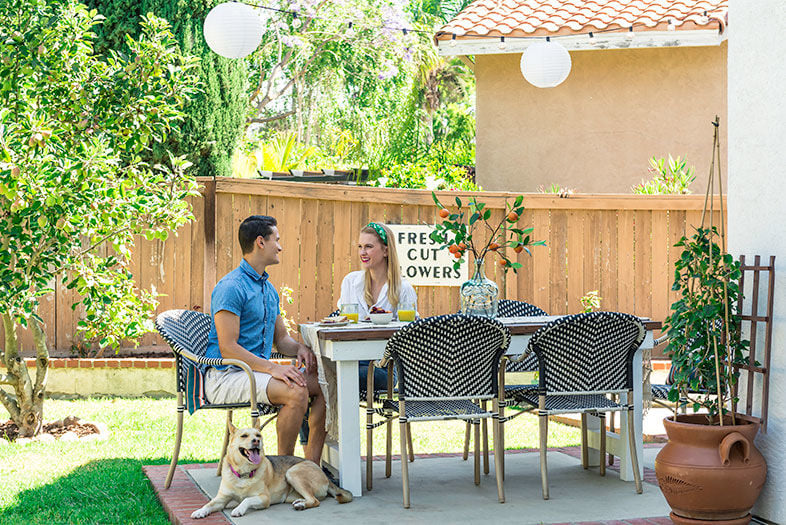 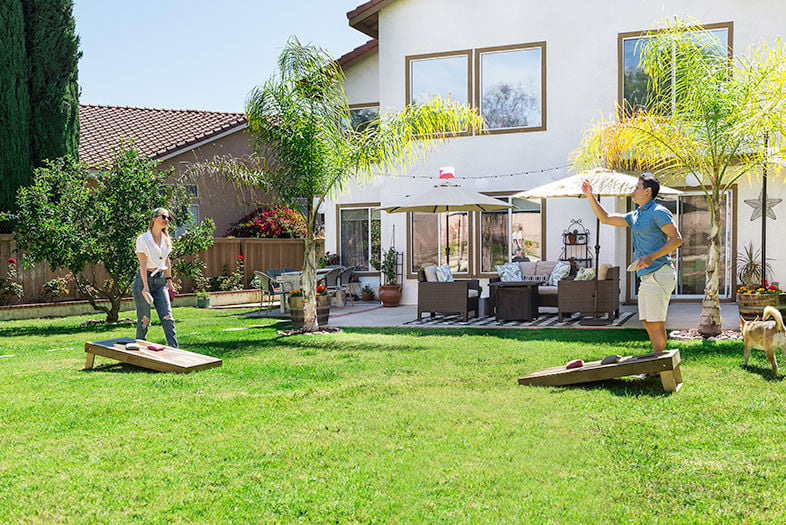 Ana Ochoa’s daily grind is quite the dichotomy. She starts her days as an attorney, with her hair perfectly styled and lipstick on. But right when she walks back through the door of her Eastlake home, the power suit comes off and her power tools rev up.

At the end of her day, she’s surrounded by a jigsaw, a miter saw, knee pads for painting from the floor, and a toolbox to hold those paints. All these also happen to be former wish list items gifted from her husband, Agustin.

"For Christmas and my birthday, he gets me power tools," she says. As for dates? Only the most romantic walks down the aisles of Lowe’s and Home Depot.

At least, this has been the couple’s reality for the past year, as they’ve been overhauling their two-story home from its tract state to meet their vintage farmhouse tastes. They purchased it in 2017, moving just around the corner from their previous 800-square-foot apartment, and have completed the redesign entirely on their own (save for a little help with bathtub installation and drywall demolition). So far, they’ve done all the structural amends for under $15,000. Not bad for first-timers.

"Learning how to use the power tools has been very empowering," Ana says, and notes that it’s also a little addictive. "But there’s definitely been some blood, sweat, and tears."

While she knows her way around a tile saw, has no issue ascending scaffolding, and can slap shiplap on any wall, her favorite toy of all is still a little ol’ paintbrush. "Giving old and sad vintage pieces a new life with some paint is something I love to do. While most would throw those pieces away, I always see the beauty behind the dirt and neglect, and know they can be restored to their former glory."

She’s lacquered up too many pieces to count—their master bedroom set, a dry sink, cabinets, and then some—but the most noteworthy of all is "the book wall."

"We refer to him affectionately as Booker," Ana says of her portrait of a horse, painted on a sprawl of open books in the parlor. "I got inspiration when we went to Colombia. Agustin’s uncle has a restaurant there with something very similar, but of a cow. We went with a horse, because I used to ride horses."

Ana had her parents ship a box full of old books from Oregon, which she then soaked in coffee and let dry to create their distressed effect. From there, she nailed them to the wall, projected an outline on it, and hand-painted the pages.

It’s the biggest statement piece in the house and a testament to Ana’s eye—and knack—for design. She credits her parents for that, saying that her mom’s an avid antique collector, but awful with handiwork or anything requiring coordination. (She jokes that they don’t even let her ride a bike.)

Thankfully her dad, who’s a contractor (he designed Regis Philbin’s kitchen), instilled some grit in her and her husband. "He taught us a lot of the stuff that we’ve done," says Agustin, a finance manager. They’ve done a lot, and still have more to go. Ana wants to paint the stair banister and the fan in the master bedroom black. There are three additional rooms upstairs she also plans to put her stamp on. When the time’s right, they might even convert one into a nursery.

None of that is as intimidating as what they’ve accomplished so far. "The kitchen was the hardest," Ana says. "It was a month and a half. We were working our regular 40-hour jobs and then in the kitchen."

The concrete countertops were the biggest feat. Picture this: Over the course of one weekend, a bucket of concrete sits in the kitchen, Agustin mixing it and Ana applying it. They wait for it to dry, sand it down, and do the whole song and dance two more times, before they can seal it.

Surrounding that, they painted the cabinets, added additional storage above them, installed a new backsplash and wrapped shiplap wall­paper around the island.

"We did the whole thing for $2,500," Ana beams, proud of her ability to cut costs and sniff out an unreasonable quote.

The light fixture above their dining room table is a great example of her thrift. It was going to cost $350 for someone to hang it for them. Instead, they rented a ladder for $150 to hang it and the rest of their pendants themselves. They also rented scaffolding to reface their fireplace. Believe it or not, it’s all faux brick. Ana used a drywall compound to create the bricklike texture. She gave the same treatment to her upstairs bathrooms.

"On her blog, Fiddle Leaf Interiors, you can see how she made this [and Booker]. She created a tutorial for it, and it’s super incredible," Agustin says, affectionately. He’s fully supportive of his wife’s hobby, though he took a while to come around to the style, and Ana still has to help him define it.

Ana starts, "You say we decorate like old people..."

"No, but I love it," he says. "Ana goes out and finds pieces of furniture, and she’ll upgrade them?"

"Upcycle," he says, gesturing toward an antique couch in their parlor. Ana found it on Facebook Marketplace, reupholstered it in coffee sacks purchased from Etsy, and whitewashed it for a vintage look.

She and Agustin estimate about 80 percent of their furniture came secondhand and had similar treatments. For the most part, Ana’s sourcing online, because her day job doesn’t leave much time to thrift around. Her favorite find is a pair of theater chairs, which she got on OfferUp for $150, then reupholstered and stained them. The seller told her they’re from an old theater in LA.

"That’s actually what I love the most about collecting vintage pieces—they all have a story," she says. "And giving them a new home and new life is such a wonderful way to honor and protect the beauty of the past."

The pieces she can’t find, she starts building herself, like the curtains downstairs. "I just bought rods and those little corbel things from Home Depot, cut out the divots, and stained them." She makes it sound easy, but is quick to dispel any sugarcoating. "That was a struggle project. For almost every project there’s a setback. Something happens that we don’t anticipate, that maybe prolongs the project. You just have to go in and accept that moment and embrace it. My biggest takeaway is that everything is fixable."

That’s also why she started her blog, to share her "do as I say, not as I do" stories. "I tell people to do things in a more correct way than me. I just charge forward without doing much research. I consider myself a lazy DIYer, because I’ll just execute and see what happens."

It’s like buying all of the ingredients for a recipe but not following the directions. "Just throw it all in," Ana says.

One can pull up a seat at the dining table on her back patio for a case study in that. It’s the first piece of furniture Ana ever constructed from scratch. A quick search for instructions, measurement of the space, and a trip to Lowe’s later, she’d paid $75 for the whole ordeal.

"It’s far from perfect, but it stands. I feel like anyone can do it. I mean, even I can do it!"