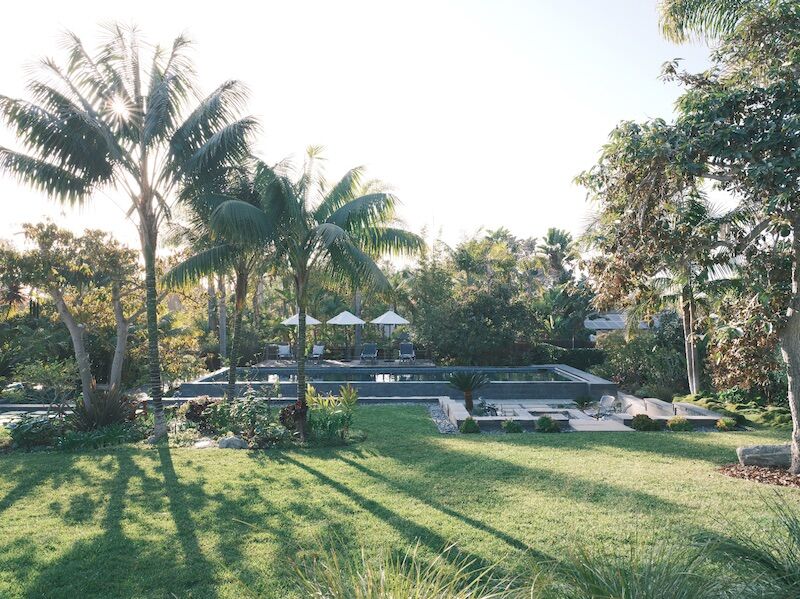 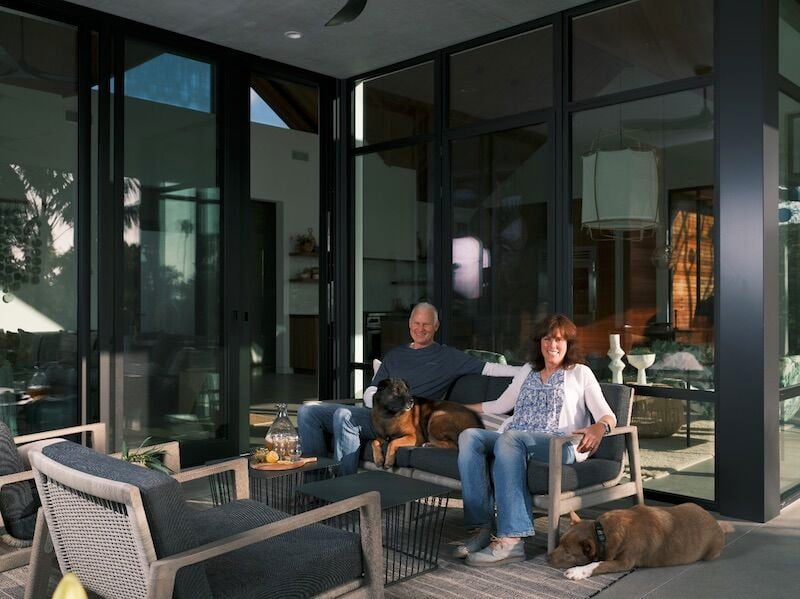 Mike and Tami wanted their home to feel like an escape, so Tami created a landscape filled with lush palms, fruit trees, and more. Designer Erica DeLorme created cozy spots where the couple can take in the view—outside, where they sit with Roxy and Jax, their dogs, and inside, on chairs covered in a custom Peter Dunham fig-leaf fabric. 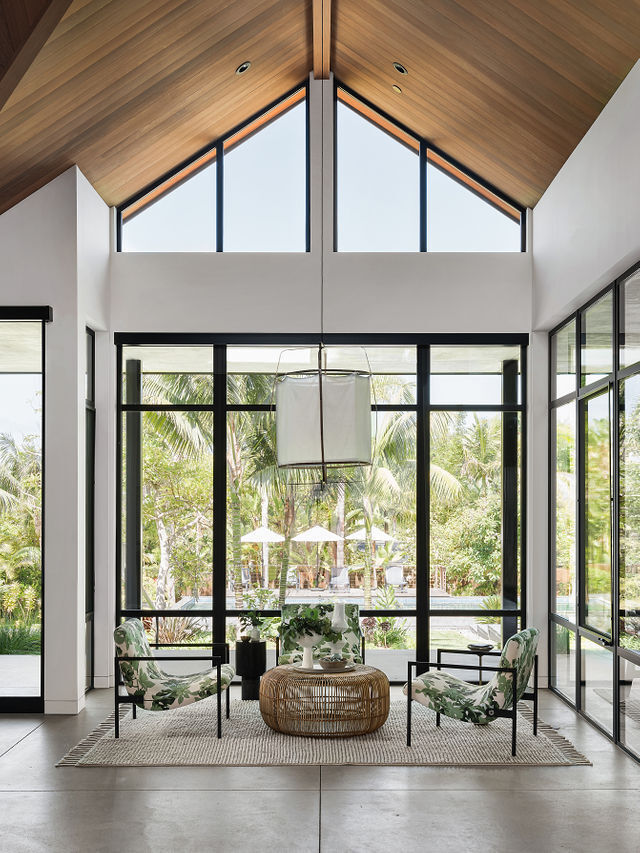 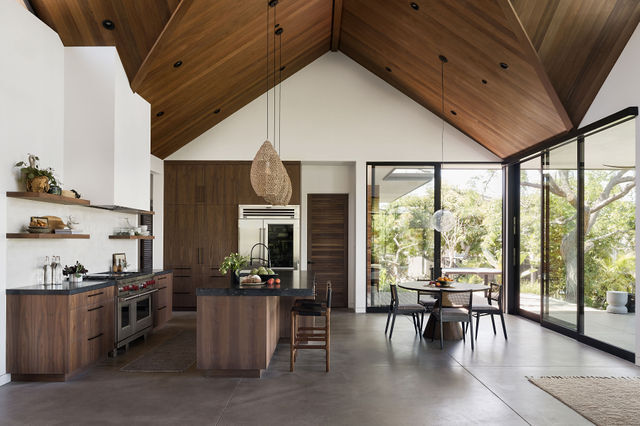 The FSC-certified maple kitchen cabinets were built by Brad Adelman Custom Cabinetry using a soy-based glue and a plant-based stain. The Stahl + Band bar stools are made from saddle leather, and the pendant lights from Arteriors are made from hand-woven natural sea grass. 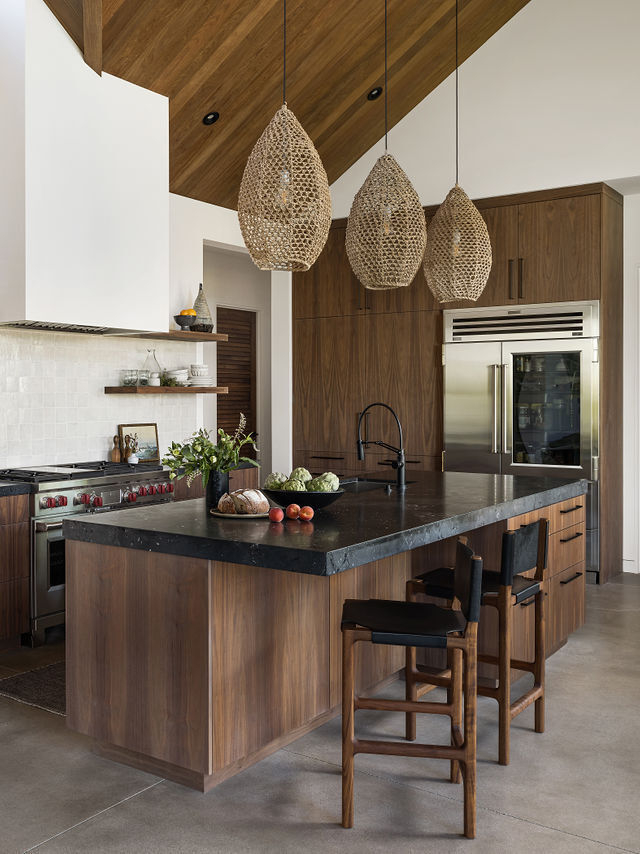 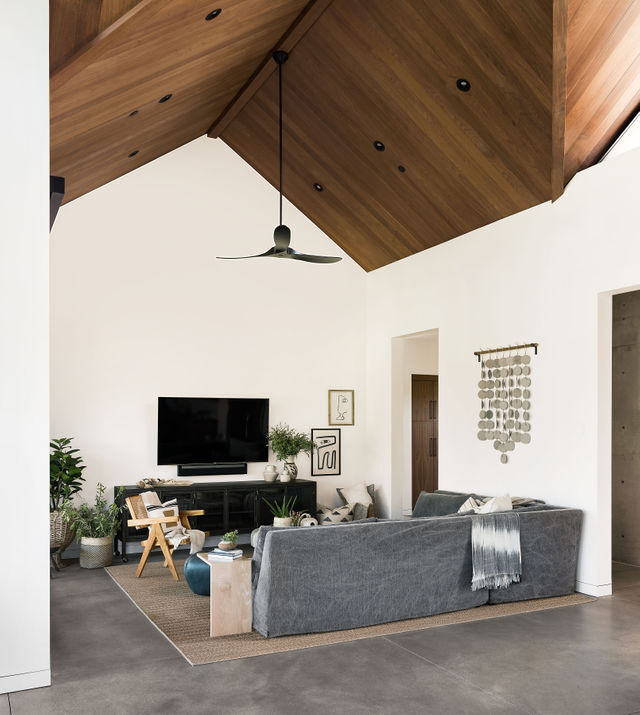 DeLorme and Tami sourced the ceramic wall hanging by Michele Quan (above the couch) on a road trip they took prior to the pandemic. DeLorme left space on the TV wall for the art-loving couple to grow their collection. In the mudroom, DeLorme painted one wall Benjamin Moore’s Wrought Iron. Tami purchased the David Alan Collection bench that sits in front of it. 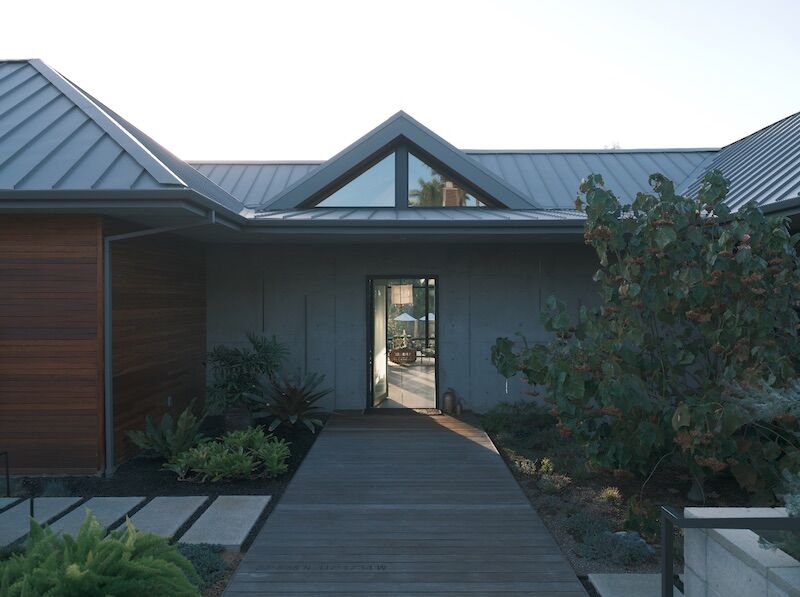 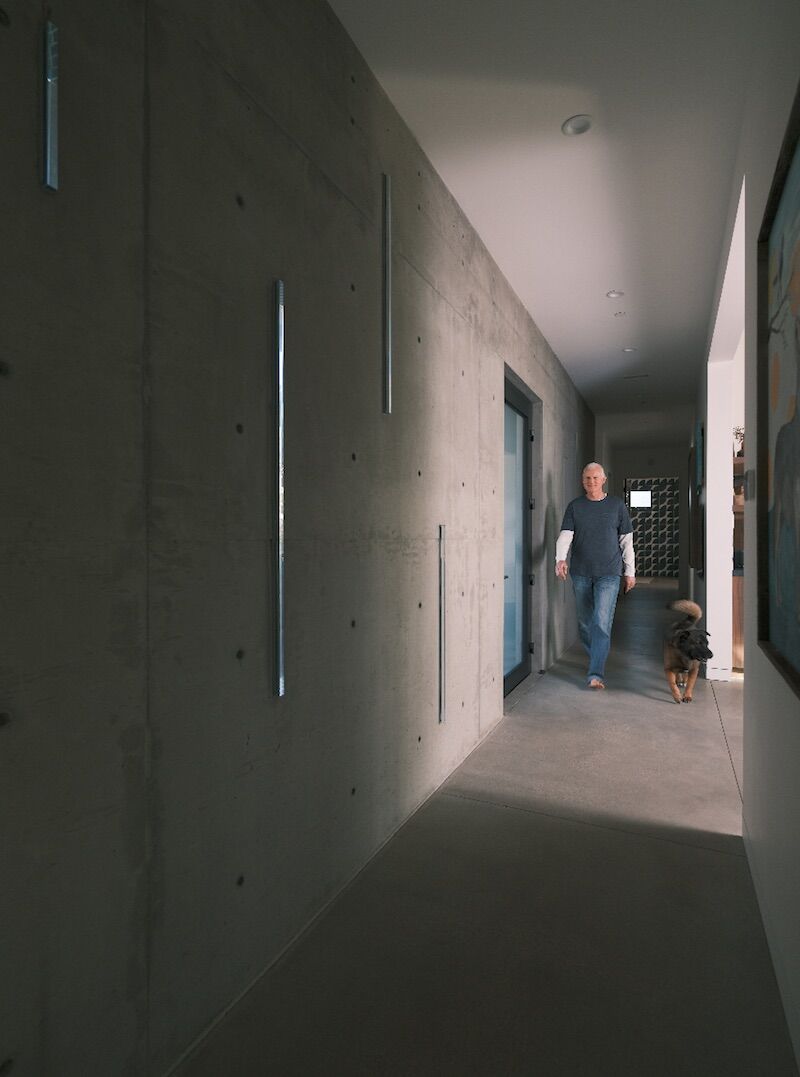 Let There Be Light

At an Arizona winery, Tami saw a cinder-block-and-glass wall she loved. “I liked that you couldn’t see people through it, but you could see light,” she says. The McNerneys wanted this feature incorporated into their home. The interpretation is a concrete wall flanking one side of the home’s only hallway, and Tami says the colorful spectrum of light it casts in the morning is her favorite. 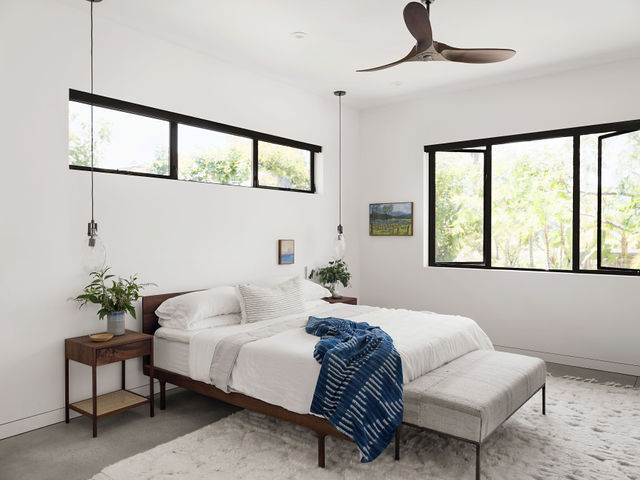 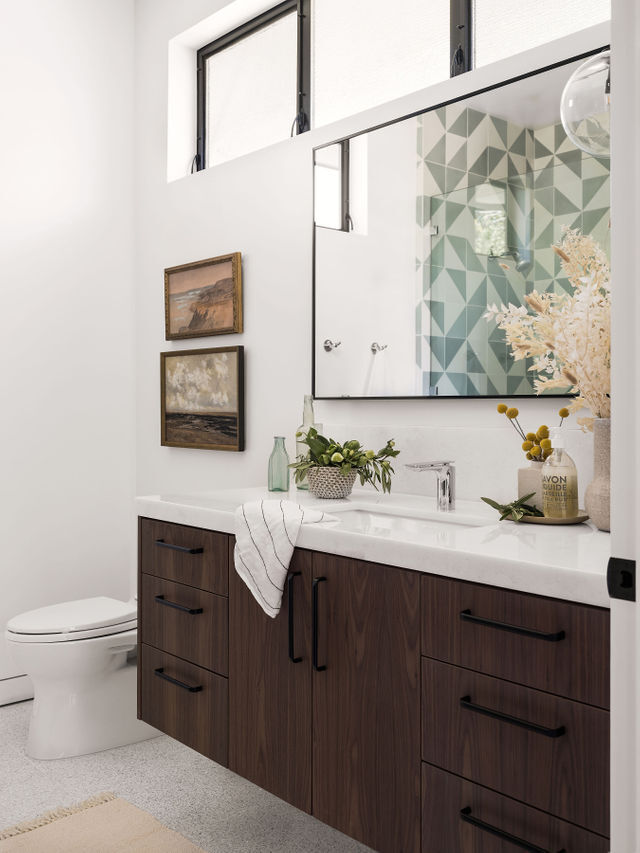 Tami’s favorite colors (green and blue) make subtle appearances throughout the house but go bold in the guest bathroom, where the shower features a light green tile. For balance, DeLorme kept the primary bedroom neutral with a bed from Kalon Studio, nightstands from Faithful Roots, and a bench from Shoppe by Amber Interiors.

A butterfly-inspired roof with dramatic angles and clerestory windows, a concrete wall with glass inserts, and a style reminiscent of a bed and breakfast in Maui were at the top of the wish list that Mike and Tami McNerney had for their new home. It was a short list they’d been making—and editing—for years.

The couple bought their 1,000-square-foot Leucadia home in 2000 from a couple at their church who’d had it built in the 1940s. It was a simple Hawaiian-plantation-style home with lots of tropical landscaping. “We fell in love with the feel of the home and the yard,” Tami says. The three-quarter-acre property provided loads of room for their 100-pound Akita to run and lots of green space for Tami, who fosters and trains dogs and loves to garden.

The McNerneys lived in that two-bed, one-bath home for 18 years, keeping a binder of images they liked all the while, intending to remodel at some point. “We always planned to expand—add on, build up, or split the lot,” Mike says, “but we weren’t ever in a rush. We never felt cramped in the little house.”

That changed in 2016, when Tami was knocked off her feet at a dog park, broke her knee in seven places, and had to use a wheelchair for four months. The couple quickly realized the limitations of their bungalow when Tami couldn’t navigate the narrow hallways or doorways in the chair.

Adding on wasn’t going to cut it. The McNerneys needed a home that would allow them to one day age in place. They decided to build a larger single-story home—with much wider passages—on the same lot, behind their little house. They also wanted their new home to be environmentally focused. “We wanted to find an architect who would help us think through a green build,” Tami says.

After interviewing several, the couple hired French-born Jean-Louis Coquereau, owner and principal architect of JLC Architecture. Tyler Van Stright served as the project manager. But before they could plan the layout and features of the home, they had to address the site’s well-developed landscape. “There were over 100 trees on the property, and here we were talking about which ones had to be cut down,” Tami says. “I planted almost everything except the avocado trees. I trudged through ditches installing irrigation and worked late into many nights using my headlamp to see what I was doing in the yard. These trees meant something to me.”

Tami negotiated to save what she could, asking Van Stright to work around the avocado trees, a wisteria vine, and a smattering of other large trees. And when it came time to remove the others, she had to be the one holding the chainsaw. “It felt like I was destroying memories,” she confesses. “I’m sentimental, so I had to be the one to do it.” The trees that remained became a focal point of the new design.

Van Stright explains that the real challenge wasn’t in preserving vegetation, but in giving the couple’s traditional tropical style a modern interpretation: “We didn’t want the Hawaiian elements to feel forced; we wanted to retain all the best aspects of its design—the vaulted roof, deep overhangs, and warm wood.” The result is a home that marries the images from the McNerneys’ inspiration binder with modern architecture.

Inside, beyond the entryway, a wall of windows and glass doors provides sight lines from the spacious living, dining, and kitchen areas out to the lush landscape and Balinese-inspired pool the couple built in 2006. Above, an ipe wood ceiling dramatically dips, soars, and comes to a peak in the center of the room. The hallway that runs in opposite directions from the entry is just as striking. Made of concrete, it’s modeled after one Tami spotted at a winery in Scottsdale, Arizona. “It was made of cinder block and had green pieces of glass in it that let the light through,” she says. “I had never seen anything like it. Mike and I agreed that we wanted to somehow incorporate it into the house.”

The hallway was reinterpreted as a poured-in-place concrete wall with ribbons of clear glass, rather than green. In the morning light, the east-facing wall makes a rainbow path that travels from the home office and guest suite to the primary bedroom and bath.

The couple’s commitment to a sustainable, health-conscious build meant not using anything that would off-gas, sealing the concrete floors with a nontoxic coating that still lets the texture of the rock show through, finding insulation made of recycled denim, sourcing FSC-certified maple cabinets that use a soy-based glue, and staining them with a plant-based product from Rubio Monocoat, a Belgian company.

The McNerneys requested to use AFM Safecoat, a paint that’s available only through Colorama Paints & Supply in San Diego. They installed solar panels on top of the little house to power both homes, and they treat their water with the Wellpure Water Treatment System from Wellsprings Water Technologies out of Escondido.

“That system makes it so we don’t need chlorine in the pool, we can drink the water right from the tap, and the plants are doing so much better on it, too,” Mike explains. The McNerneys sourced most of the greener building materials after doing lots of research and seeing

some of the products in action. Mike is a commercial real estate developer for Lowe, the company behind the IDEA1 residential building downtown and the renovation of the Town and Country Resort in Mission Valley.

For builder Kerry Rutherford, of KR Building, it was the first time he’d used some of the materials, so he had to figure out how to guarantee his work on products that were unfamiliar to him. It took some rethinking. “We usually spray foam insulation into a vaulted ceiling to prevent condensation,” he says, “but we couldn’t do that, so we added venting instead.”

During the framing phase, the McNerneys hired interior designer Erica DeLorme of E+D Design to bring their style indoors, creating resort-like nods to island life. She hung woven light fixtures above the island, made outdoor living spaces under the overhangs, and commissioned a set of chairs from Cisco Home (an LA–based company known for its eco-friendly pieces) in a fig-leaf print from Peter Dunham.

Though the home is rather neutral, DeLorme played with Tami’s two favorite colors—green and blue—in impactful ways. The guest bath wears a sea-glass green custom concrete tile from Modern Earth Tile Company. DeLorme and Tami laid out the arrangement together; it’s intentionally devoid of repetition. In the primary bath, one wall of which can be seen from the hall, DeLorme chose a navy Clé cement tile.

The art throughout the home was a joint effort between the owners and the designer. The McNerneys bought what speaks to them—a photo of Willie Nelson’s hands playing his guitar, Trigger; a painting by local artist Andy Davis done on a reclaimed surfboard; and a print by John Lennon—in addition to several pieces already in their collection.

For her part, DeLorme filled in a few blanks by helping the couple find the three-dimensional wall hanging for the living area and commissioning local artist Nancy Fraser to create a few paintings. But DeLorme still left plenty of space for the couple to add, which they plan to do.

Though she loves the entire home, Tami admits spending most of her time in the yard with the dogs and her plants. She and Mike agree that the concrete wall and ceiling feel the most unique: When Van Stright visited after the home was complete, he came through the entry and lay down on the concrete floor to take in the view above.

“That level of comfort speaks to the nature of this living space,” Van Stright says. “They have this finely crafted home, and yet nothing feels untouchable. It’s a home that’s meant to be enjoyed and lived in.”