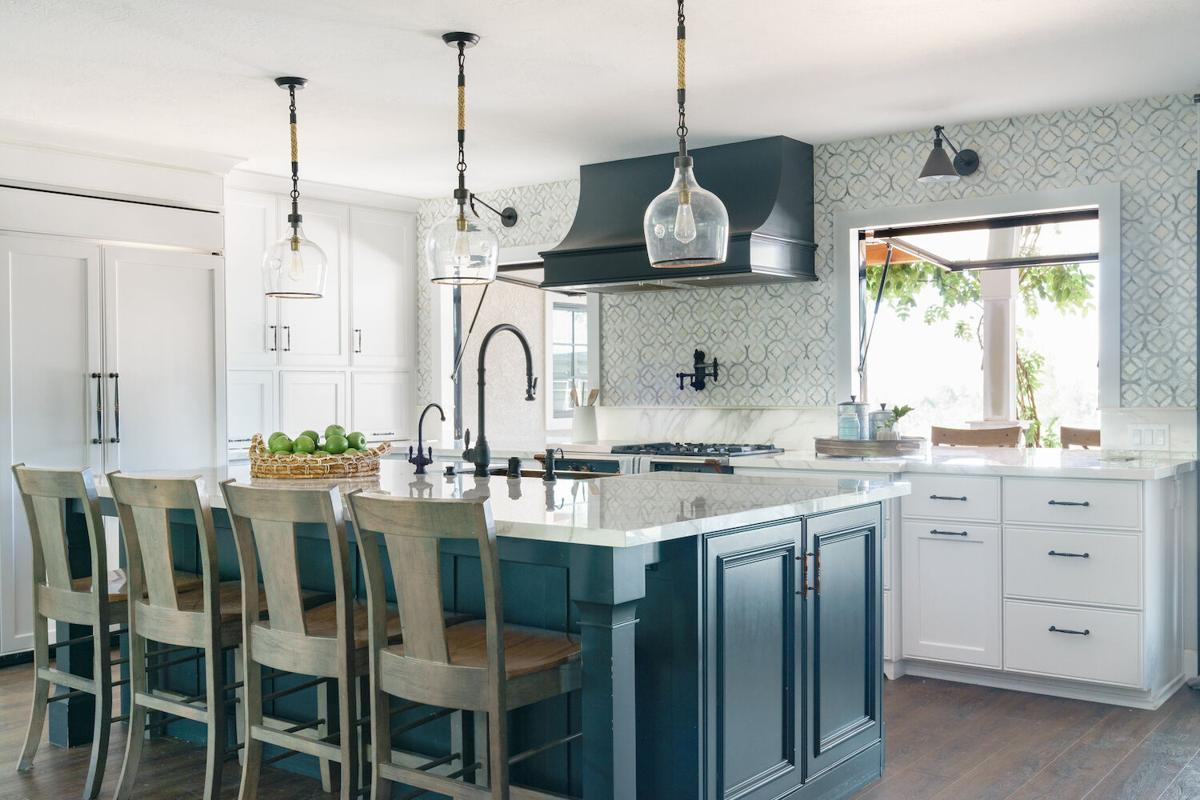 Nicole and John Almond decided it was time to renovate their 1990s kitchen, but rethinking the kitchen with Blythe Interiors senior designer Carter Crandall quickly led to a complete overhaul of their ranch house in Alpine. “They didn’t want to limit themselves in terms of design,” Crandall says. “And they had a clear vision for what they wanted.” 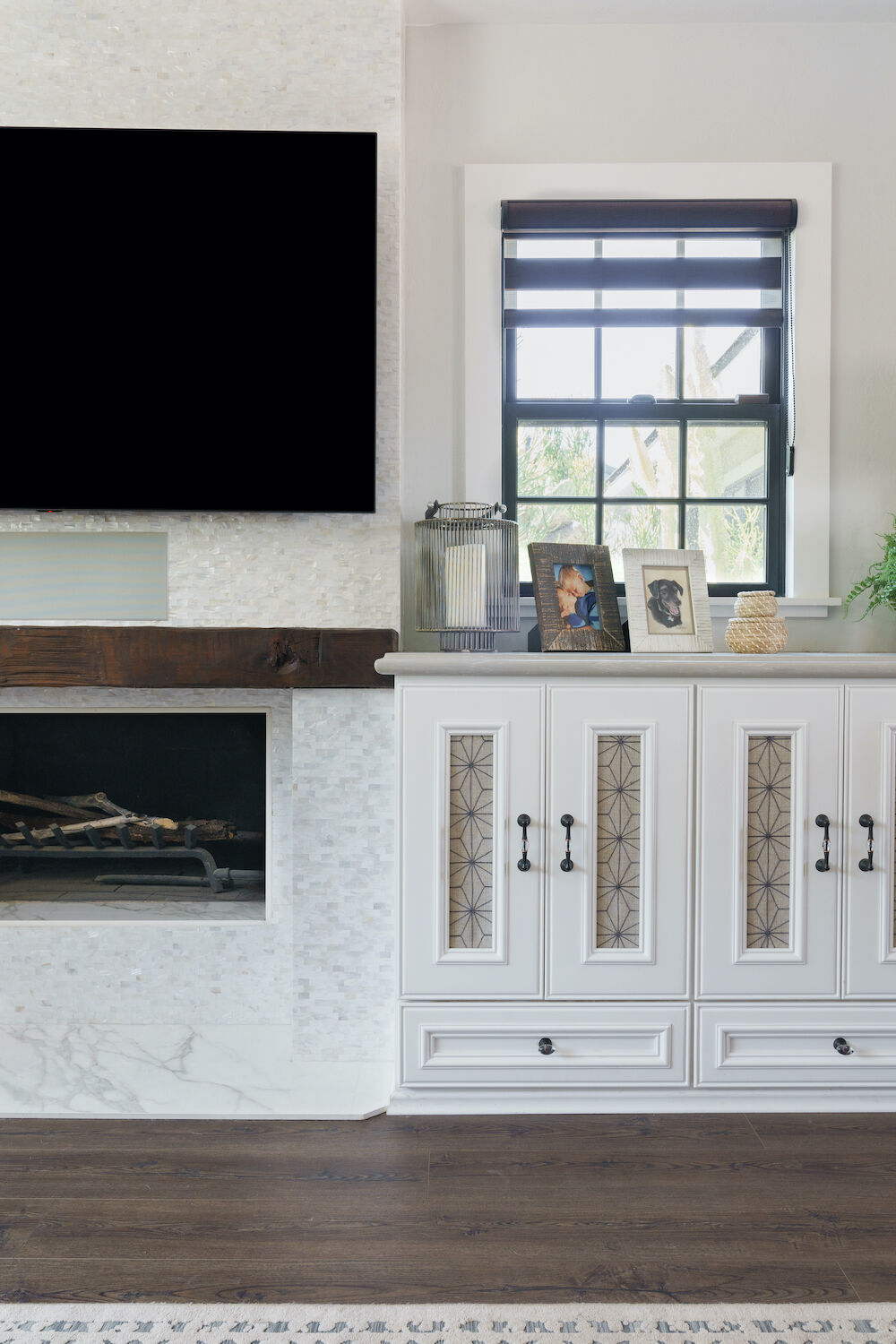 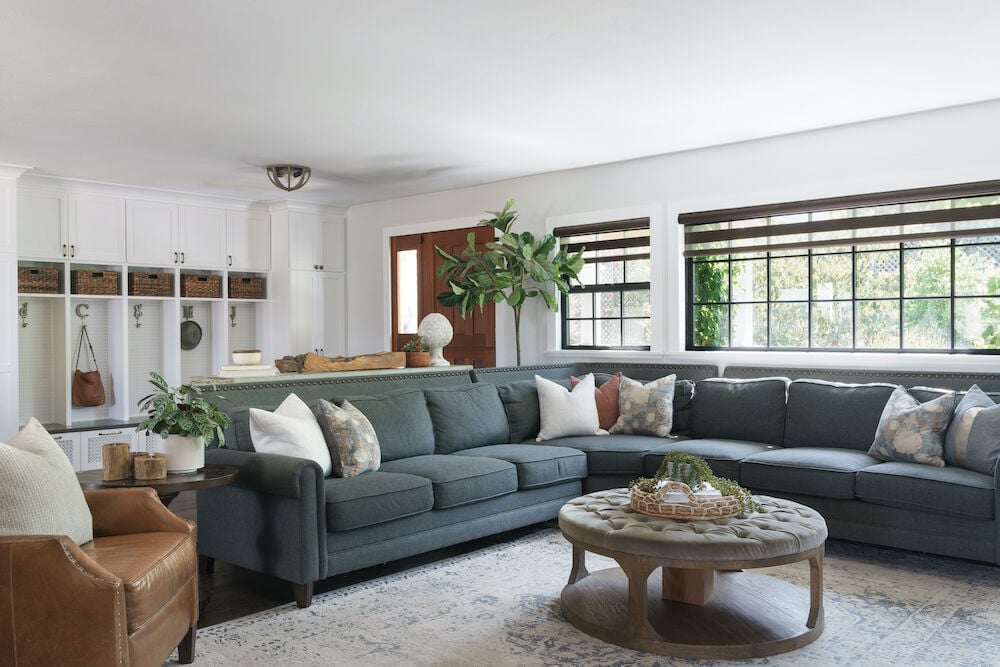 Crandall created the main living space to be used. Upholstered in a stain-and-fade-resistant fabric—meant to withstand dogs, kids, and all their snacks—the large sectional from Bassett provides plenty of comfy seating for family movie nights. And because John didn’t get the leather sectional he preferred, Crandall added a caramel leather chair (also from Bassett) just for him. 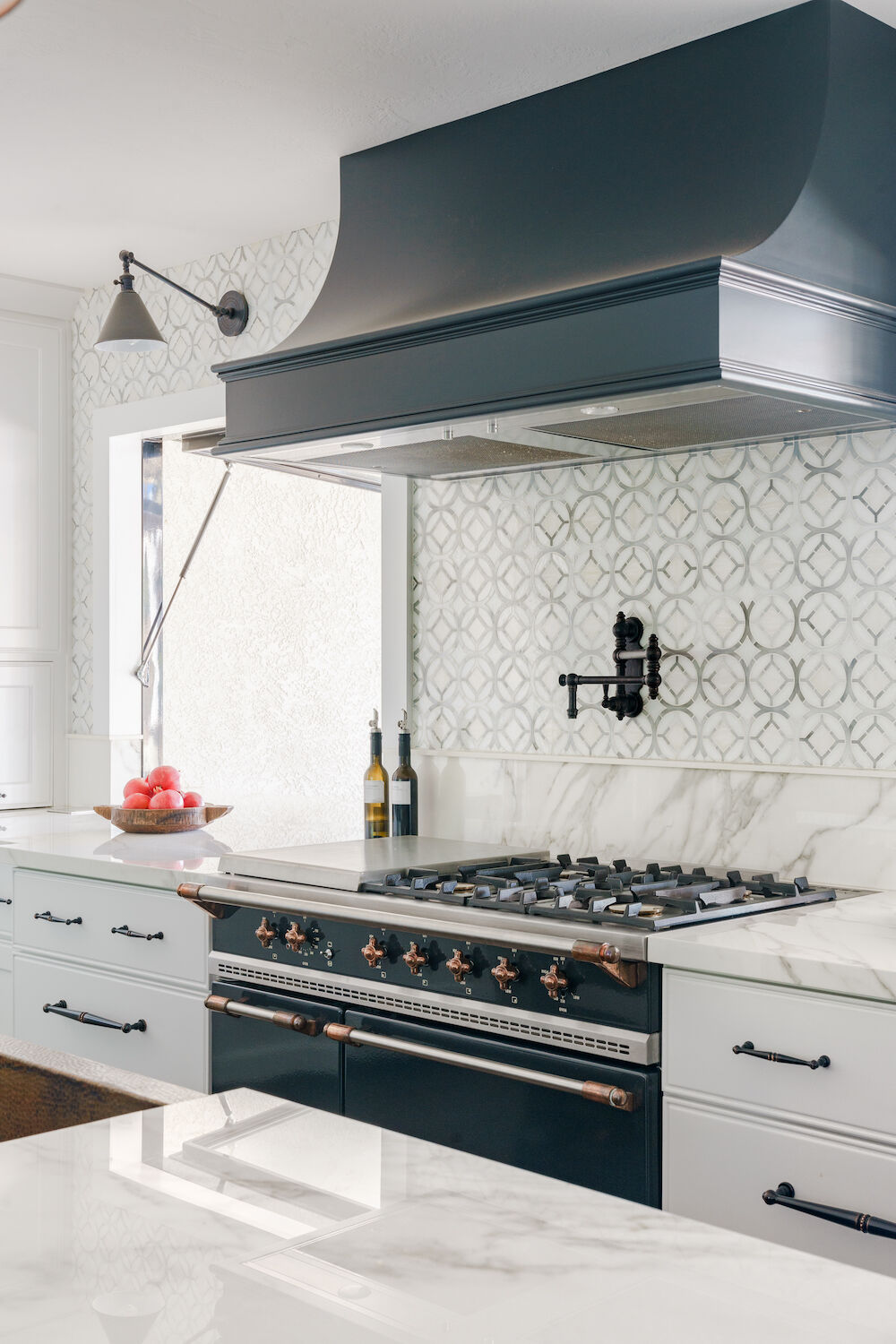 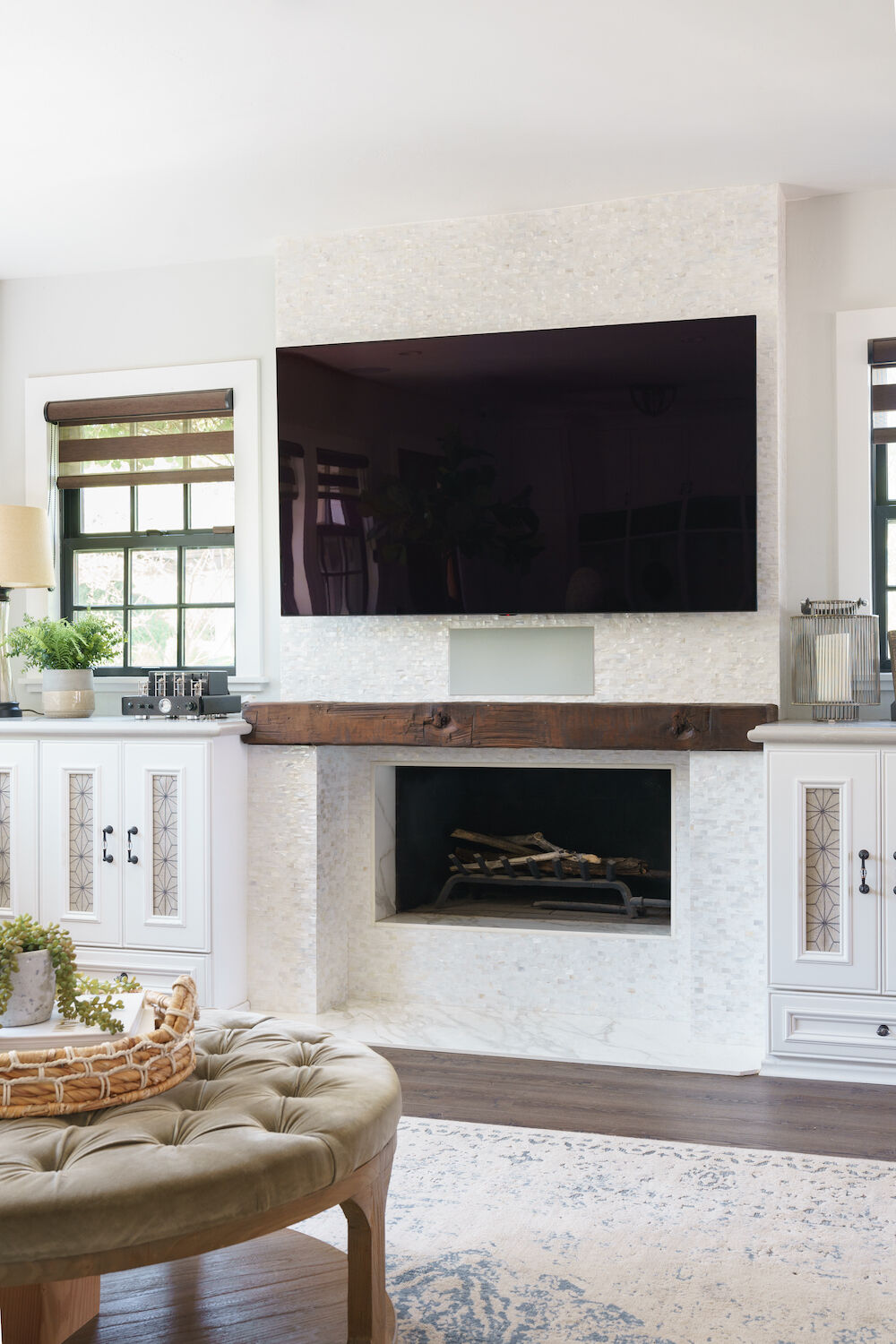 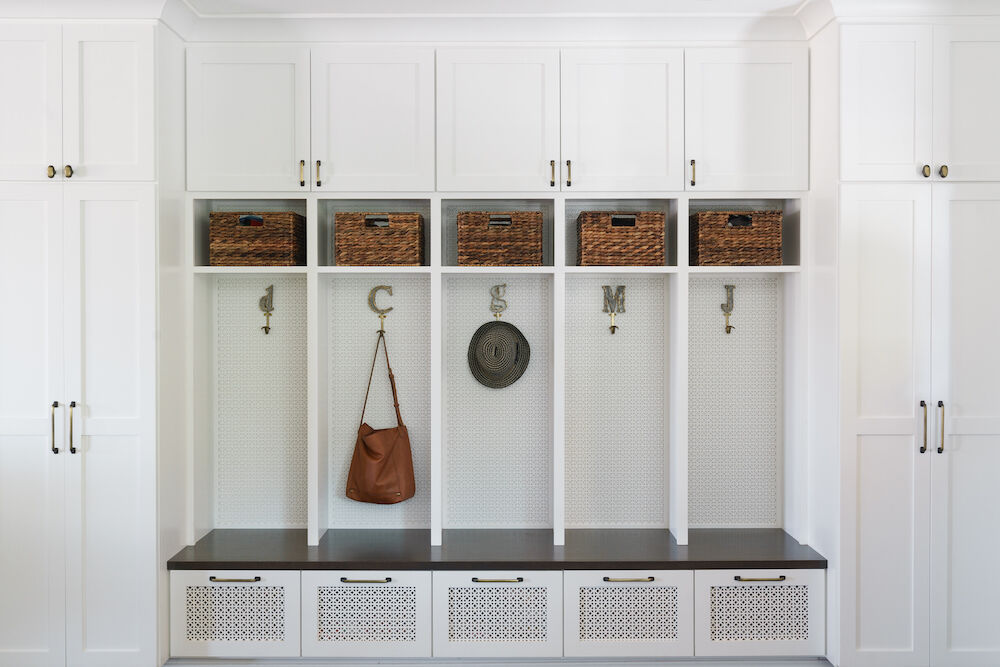 Crandall drew inspiration from Nicole’s Pinterest boards to fashion an organization system just past the front door. Monogrammed hooks from Anthropologie designate a spot for each person’s bags and hats. Drawers below keep shoes off the floor, and decorative baskets above create a catchall for sunglasses, keys, and other small stuff. 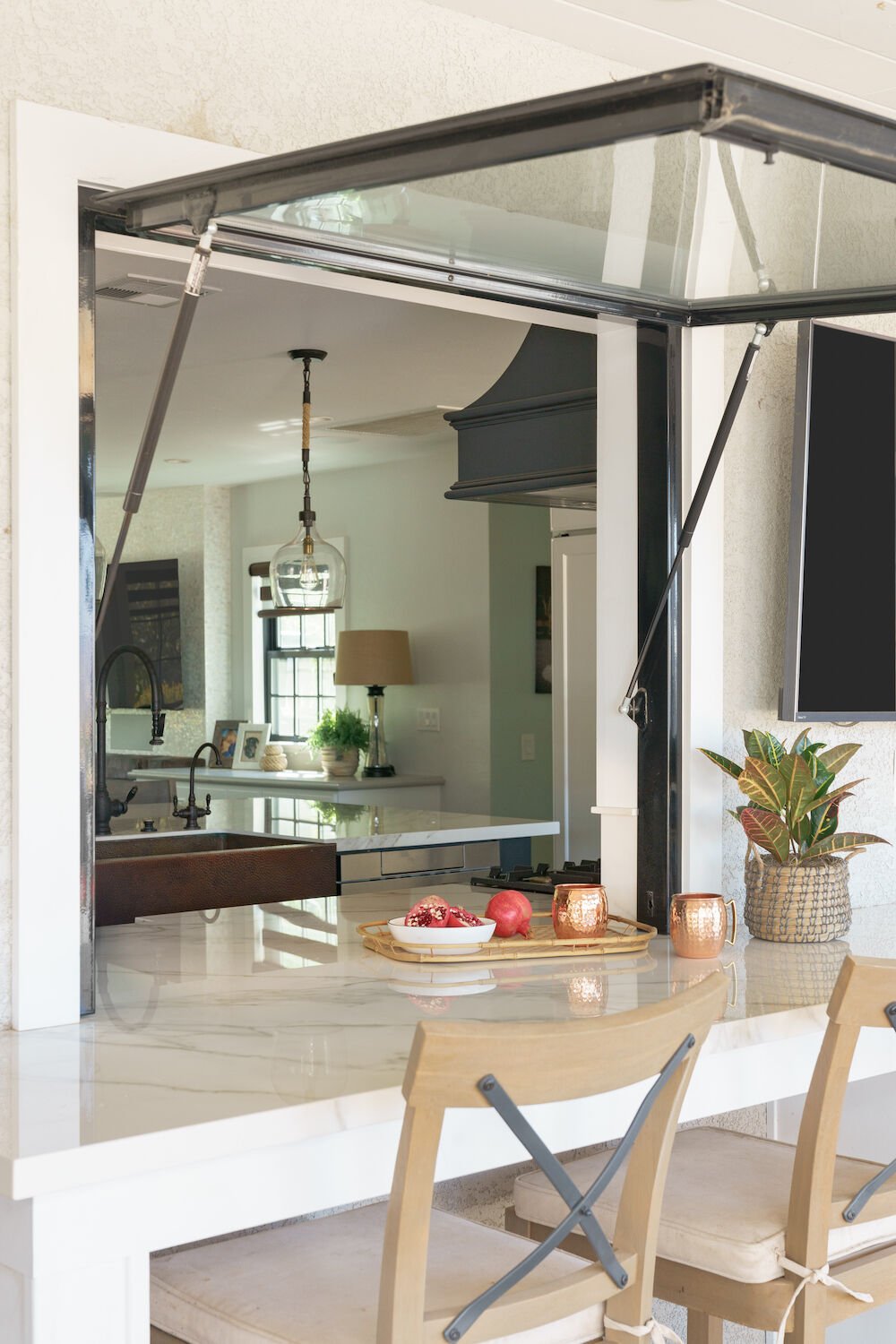 The pass-through windows were a must for the couple. “I wanted the windows to flip up like the hatchback on a car,” John says. These were custom made by Garage Doors Unlimited. 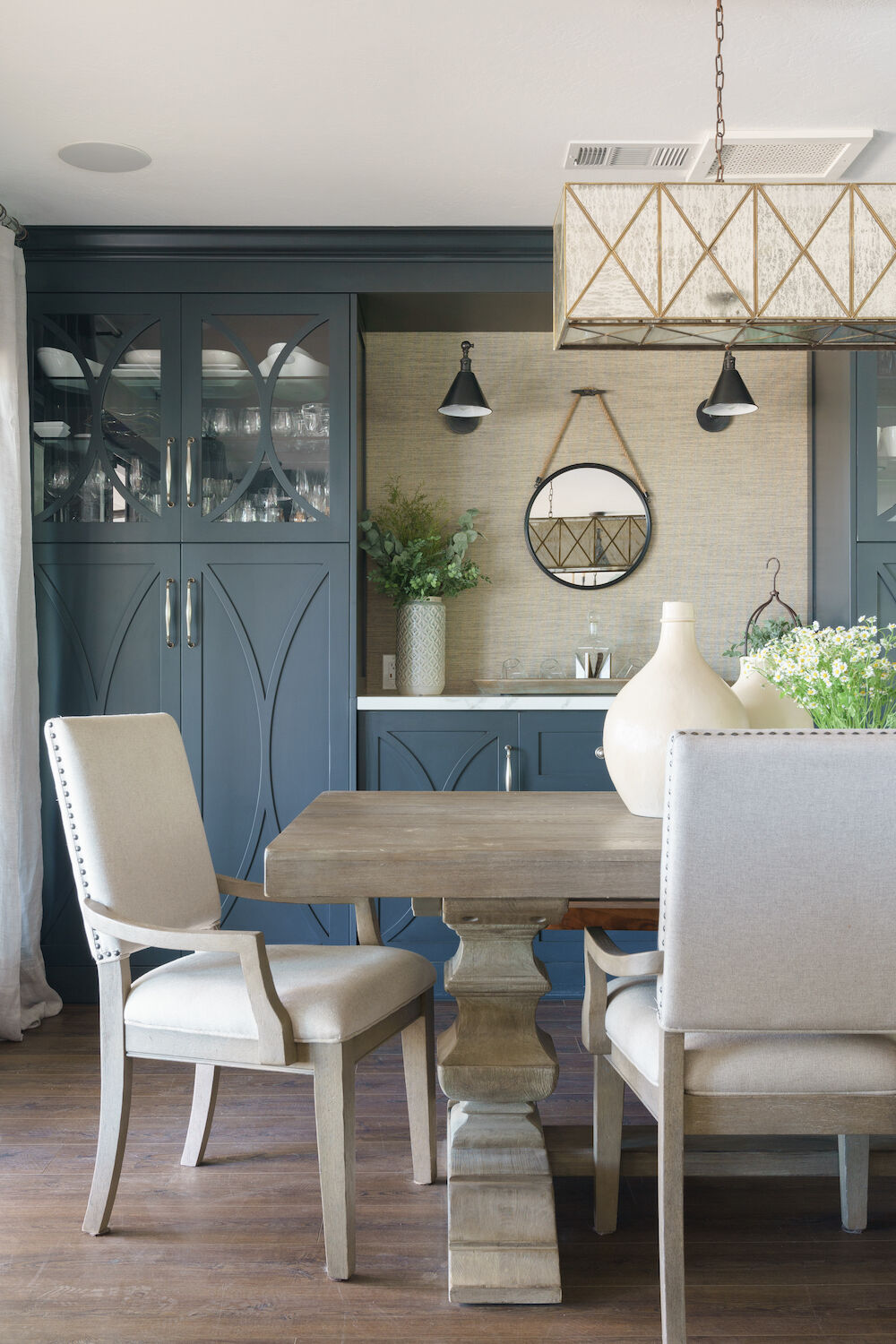 Past the trestle table from Pottery Barn, the wall of built-ins provides lots of clever storage. For example, a pantry hides behind the anthracite-painted cabinetry. 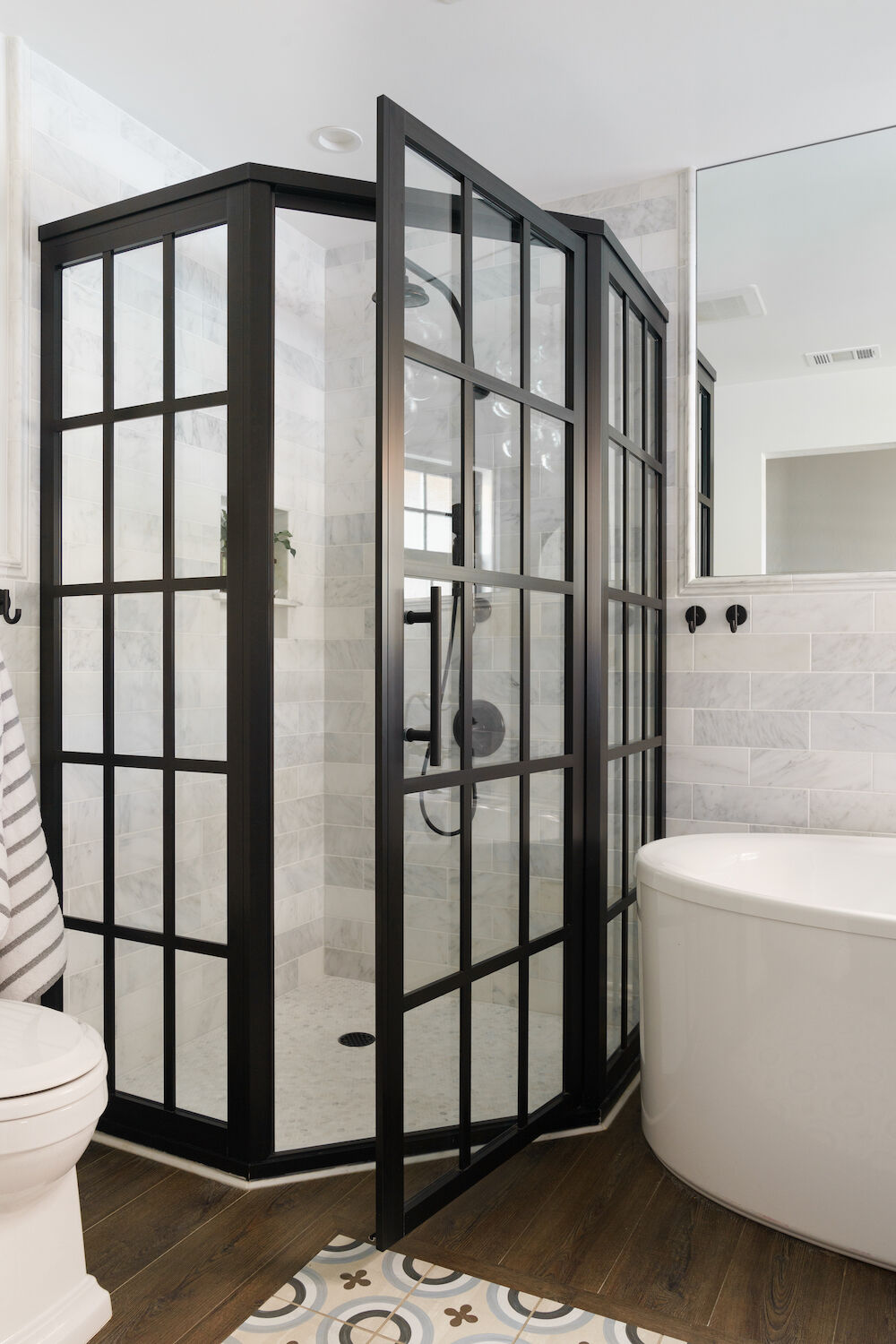 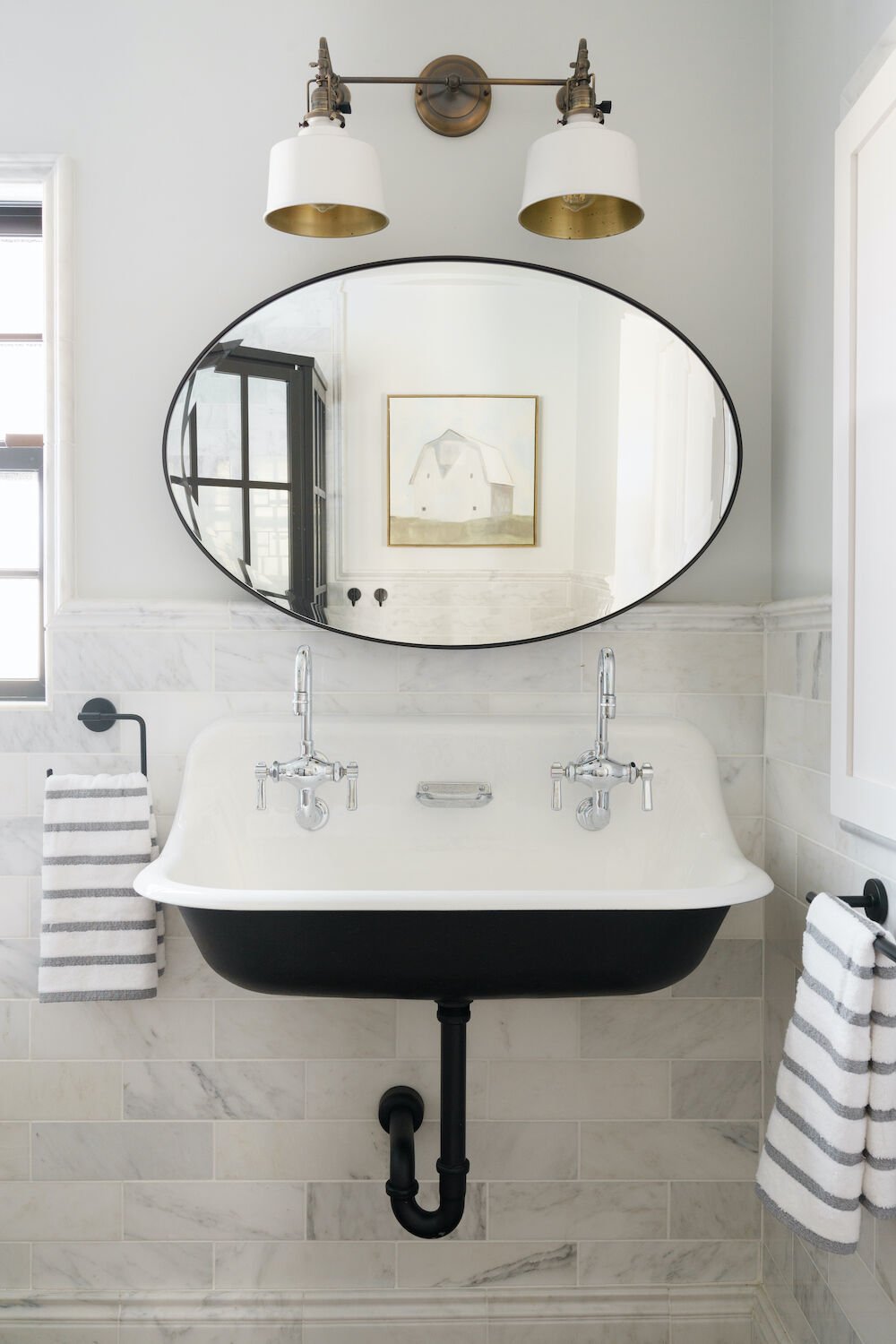 The boys’ bathroom doubles as the guest bath, so Crandall designed it to be durable and timeless. Marble tile wainscoting creates a backdrop for the black, low-profile Kohler sink. Crandall added the classic mirror and vintage-style lighting from Rejuvenation to finish the look. 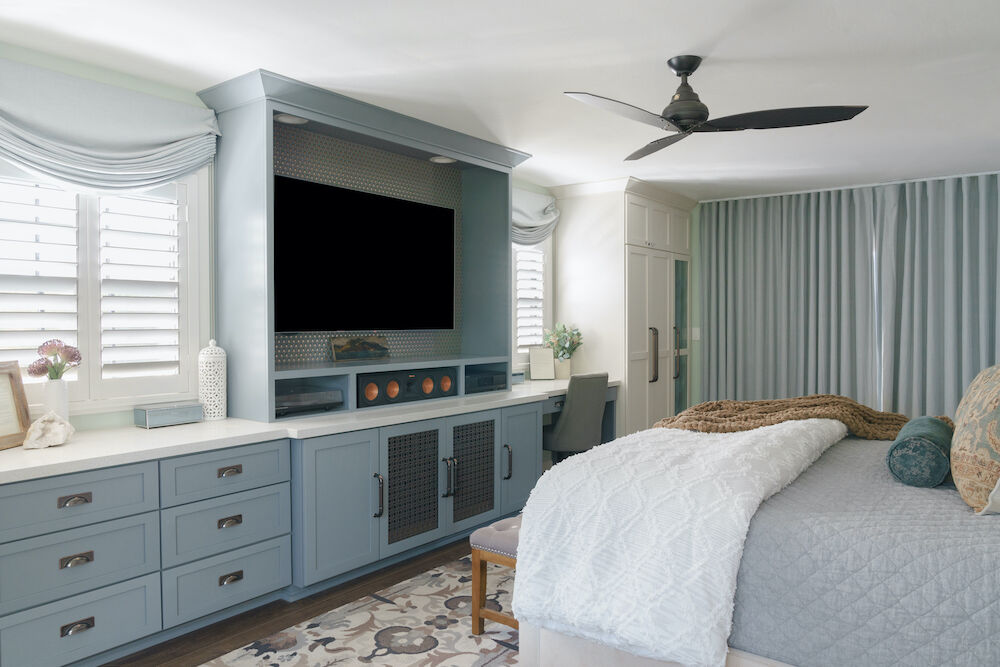 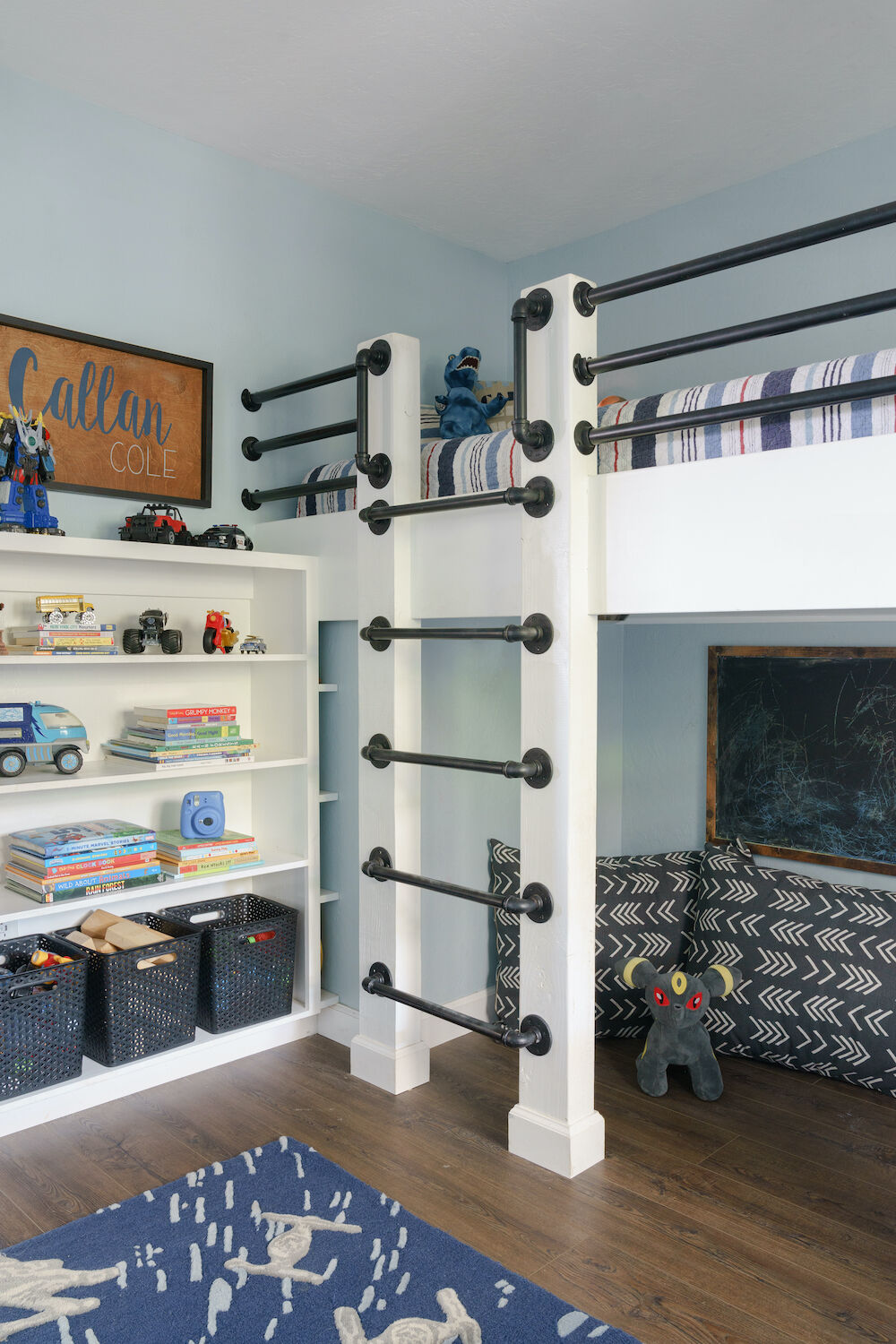 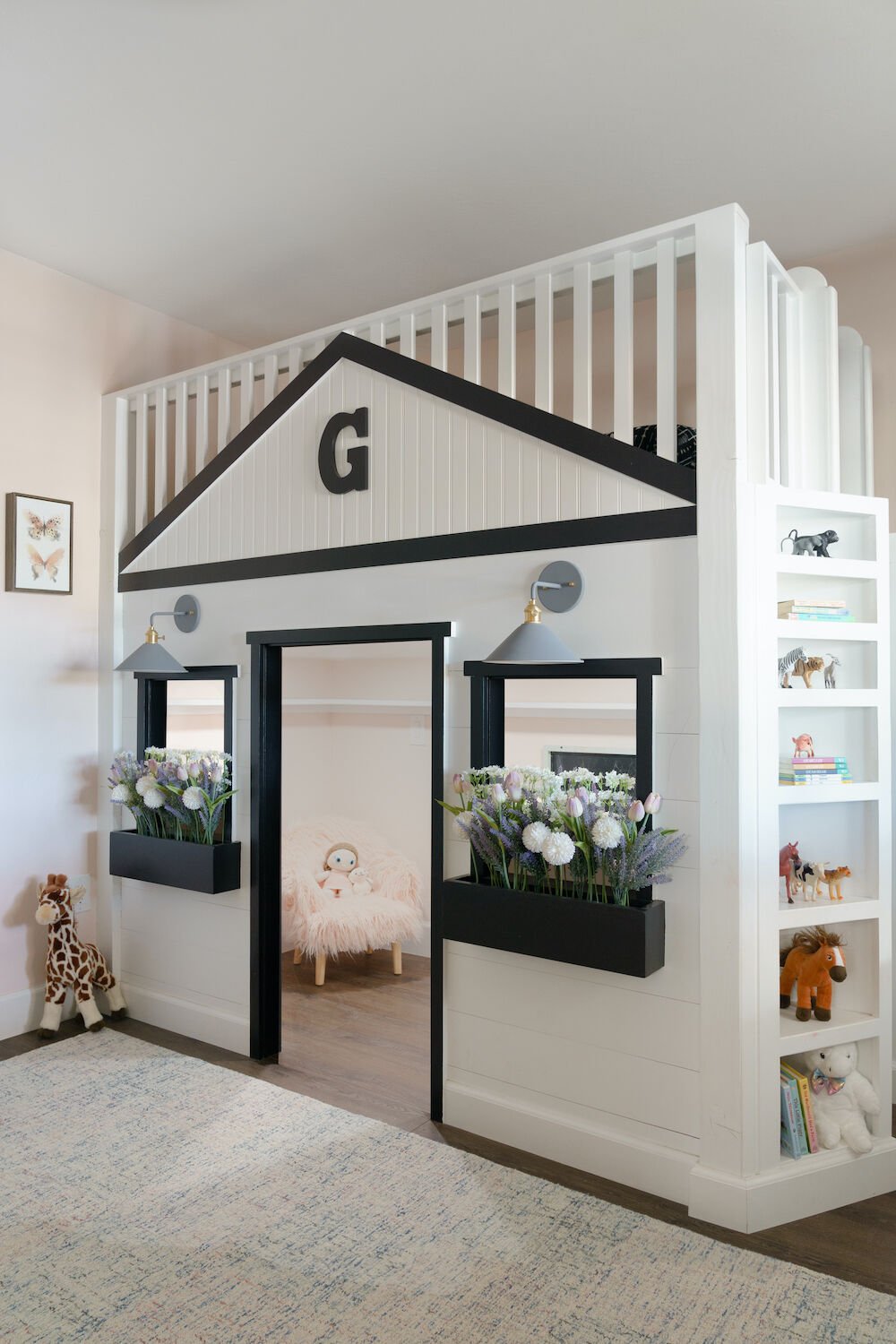 What was once the primary bedroom became 3-year-old Grace’s space. Crandall designed her custom bunk with a cottage-style play house beneath. Window boxes and lighting decorate the outside, functional shelving on the side display the little girl’s decorative knickknacks, and the interior is done in soft pink paint and cozy pint-sized furnishings.

It was nearing the end of this July when John and Nicole Almond returned to their home in Alpine after spending six weeks on the road with their kids—Jack, 9, Callan, 6, and Grace, 3. Each summer, the couple loads up their motorhome and takes the family on an adventure. They’ve done the western United States and the Midwest, but this summer marked the longest trip and the farthest distance traveled yet: all the way to New York.

It’s a tradition the family started four years ago after they’d spent 12 months bunking together in the 400-square-foot primary bedroom, bath, and laundry room of their Alpine home (as well as a 16-foot trailer in the backyard), while the rest of their interior spaces underwent a major remodel.

“It was crazy,” Nicole says. “Grace was a newborn, and she was sleeping in the laundry room.”

The Almonds moved into their 1978 ranch home on Valentine’s Day, 2008. They were ready for a bigger place and more land than their Mission Beach property afforded. John, who grew up in Chula Vista, always liked the  Alpine area. And the home they found, which had been modestly updated, sat on 1.3 acres.

“The house was fine as is,” John explains. “We knew we wanted to update it at some point, but we spent what we had to buy it, so a remodel would have to wait.”

Shortly after Jack was born, John started Semper Solaris, the solar power, roofing, heating, and cooling business he co-owns. In 2017, they began their home renovation and started small: transforming a granny flat at one end of the house into the primary bedroom, bath, and laundry room.

Todd Anderson, a contractor with TWA Construction whom the couple had previously worked with on some minor projects, rebuilt the space. The couple hired interior designer Jennifer Verruto, owner of Blythe Interiors, to make it inviting with flooring, countertops, and lighting. After a mostly smooth process (there was the chore of washing and drying clothes outdoors for a couple of months), the couple decided to tackle the whole house. Since Verruto was expecting at the time, she enlisted her senior interior designer Carter Crandall to work with the Almonds.

“What’s really rad about the Almonds is that they start in one place—in this case, to remodel the kitchen—but then they don’t limit themselves,” Crandall says. She ended up taking the interiors down to the studs (except for the primary suite) and building  out a portico in the front. Leaving the rest of the home’s exterior intact, Crandall reconfigured most of the walls inside to open up the floor plan and removed closets in favor of built-in storage.

“We wanted to maximize construction costs,” John explains. “We didn’t need a bigger house; we needed to make better use of the space we had.”

The entire remodel was a collaboration. For their part, John and Nicole wanted a timeless, kid-friendly, industrial farmhouse with lots of metal. “We also really like French accents,” Nicole explains.

The black-and-copper Lacanche range inspired the design of the kitchen. The indestructible marble-like porcelain countertop extends outside for alfresco dining through awning windows constructed by Garage Doors Unlimited in Poway. A hammered copper sink was a request from Nicole, and two different cabinetmakers created custom designs that complement one another but feel more like furnishings the Almonds collected over time. Ray Carlton Cabinets in Santee built the anthracite-painted island, the pantry  cabinet in the adjacent dining room, and the vanity in the primary bathroom; The Kitchen Doctor in El Cajon made the kitchen surround, the entry built-ins, and the fireplace cabinets.

“Our house lacked storage everywhere,” Nicole says. Crandall created clever spaces to corral it all: She fashioned a decorative drop zone with niches for everyone. In the spacious living room, a custom-designed combination fireplace and media center hide audiovisual equipment—musts from John’s wish list. Besides the Dolby surround-sound system, John wired the house so everything is voice controlled.

Down the hall, each of the three kids have their own room. The boys’ rooms look almost identical. Callan and Jack’s built-in loft beds, both partially supported by the recessed linen closet in the hall, feature space underneath to play.

“John wanted the beds to be hard to get into so the boys wouldn’t ever bring girls home,” Crandall says, laughing. The beds’ railings, handles, and ladders—all constructed using pipe and flange—cleverly bring in the industrial vibe. In Grace’s room, which used to be the primary bedroom, Crandall designed a loft bed and a playhouse that resembles a cottage. Like elsewhere in the home, she removed closets in all three kids’ rooms and replaced them with built-in wardrobes, dressers, and desks.

The boys’ shared bath also functions as the guest bath. Crandall borrowed space from Grace’s room to make an area for a freestanding tub and black steel-and-glass shower enclosure. Grace’s en-suite bath features a wall of removable wallpaper that can be swapped out to suit her tastes as she grows.

John and Nicole’s bedroom was the final interior space Crandall made over—again. After living together with the dogs and kids during the whole home remodel, “it was trashed,” Crandall says. She bought new bedding and rugs, redid the window treatments, and added the wallpaper and some of the furnishings, too. “In the yearlong remodel, John and Nicole’s style evolved,” she adds. “We refreshed their room to fit with the rest of the house.”

Aside from the dramatic visible changes, John made modifications to the infrastructure to ensure the couple’s home was super energy efficient. Besides solar panels, he installed radiant barriers on all the exterior walls and in the attic. “It’s crazy how little heat transfers,”  he says. “The temperature inside the house doesn’t fluctuate much.”

The home is equipped with a tankless water heater and Tesla batteries, so it’s never without power even during an outage. Now that the house is complete, Crandall’s moved her talents outside as she works with John’s cousin Keith Lowry, of Verdant Custom Outdoors, to create an oasis for both the kids and adults.

She’s already designed the outdoor chef’s kitchen and a bathroom with a living roof; picked the lighting and furnishings; drawn the specifications for the pergola, and chosen all of the finishes. At press time, the designer was working on plans for a fancy treehouse that sleeps six and has a kitchenette, loft, and dining area.

“No one will ever want to leave this house,” Crandall says of the property. Except, of course, for the several weeks each summer when the family loads into the motorhome and heads out to explore somewhere new.

Senior designer Carter Crandall effectively combined styles and materials to create the Almond’s rustic, industrial, French-influenced home. Here, she shares advice on how to make everything come together effortlessly and intentionally.

Industrial materials work best as moments instead of focal points in a room, Crandall says. Good places to start include cabinet hardware, lighting fixtures, and accessories. Think beyond pipes and rope. Crandall prefers the vintage side of industry found in copper and unlacquered or burnished brass.

Luxe is synonymous with quality, extravagance, and style—all good things, Crandall notes. “But it’s even better to experience luxe in your sofa, pillows, or a fabulous throw blanket,” she says. Want a budget-friendly way to incorporate opulence? Try a velvet, wool or faux-fur accessory. Install Lucite or acrylic hardware on builder-grade cabinets. Or choose metals that reflect light, such as chrome, polished copper, and gold.

A common thread is best. Perhaps some of the luxe elements have industrial lines or finishes and vice versa, Crandall explains. For example, you might try a rustically designed wall sconce plated in a high-end chrome or brass. “I like to think of it this way,” Crandall explains of pieces that marry two styles. “A grape on its own is good and a cheese on its own is good, but when you combine the two, it’s magic!”