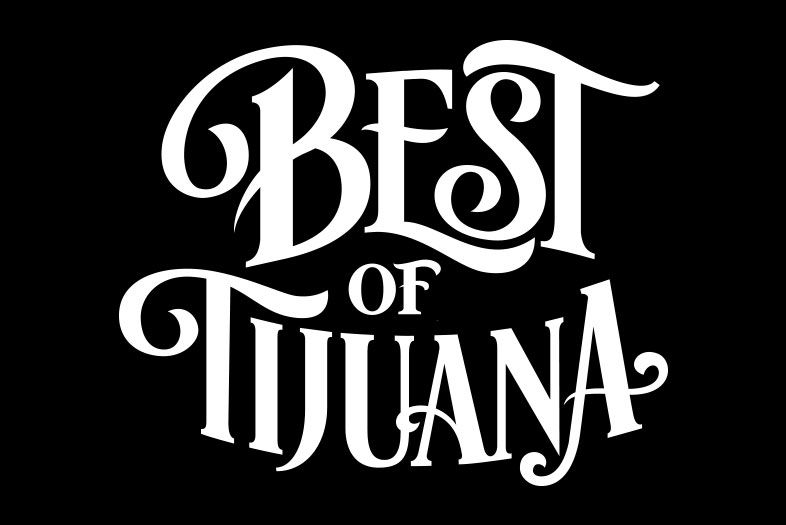 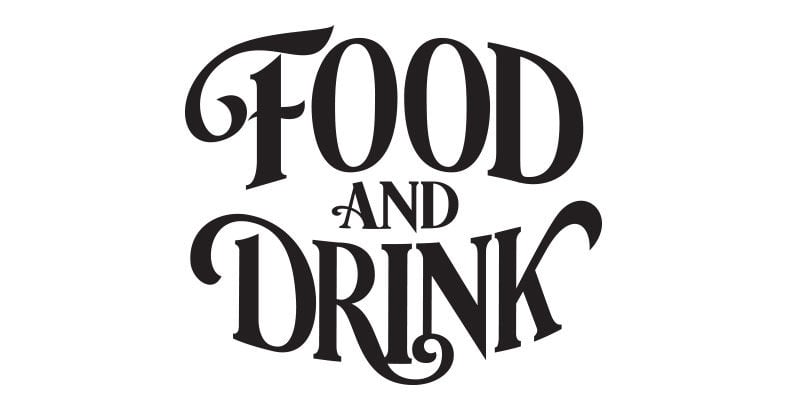 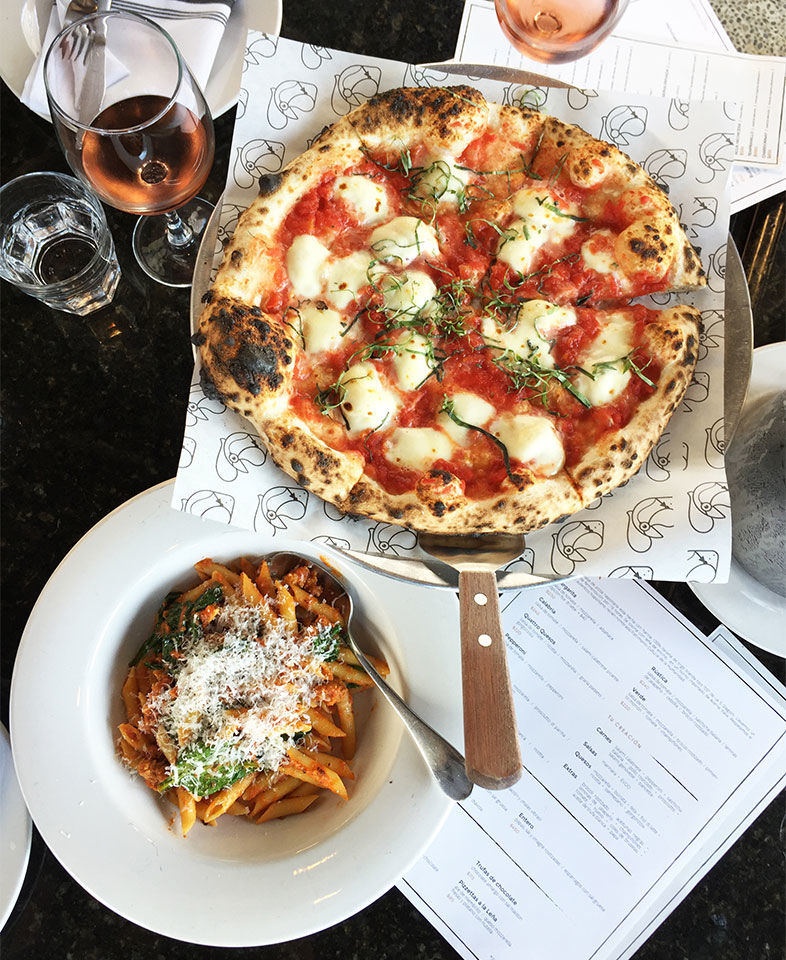 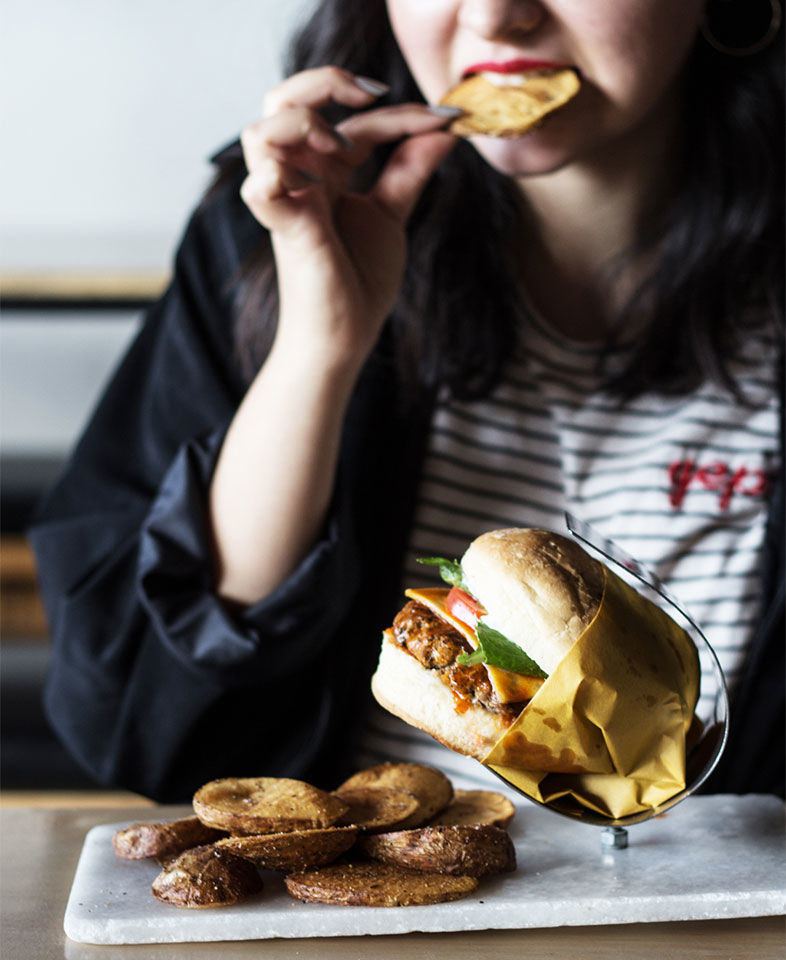 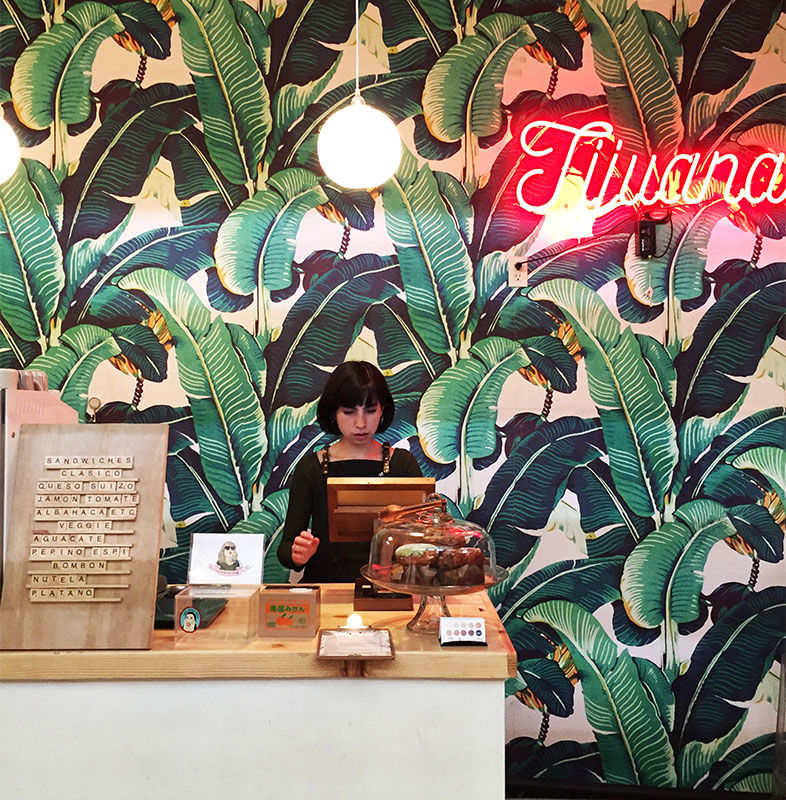 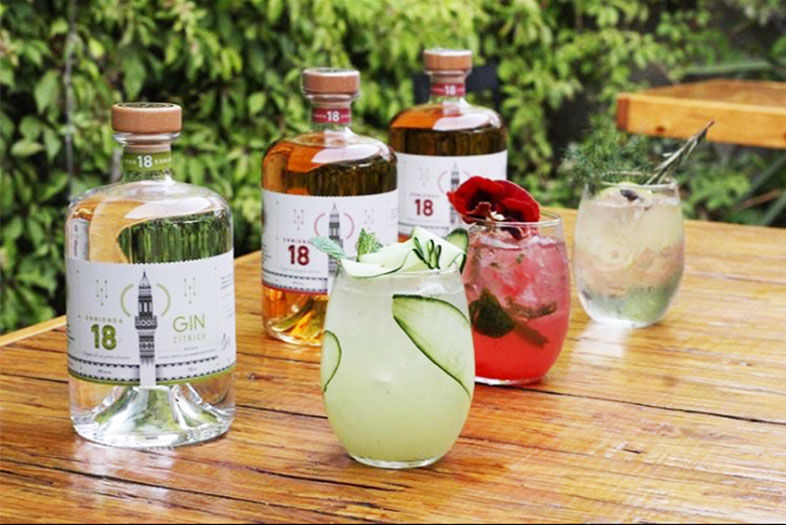 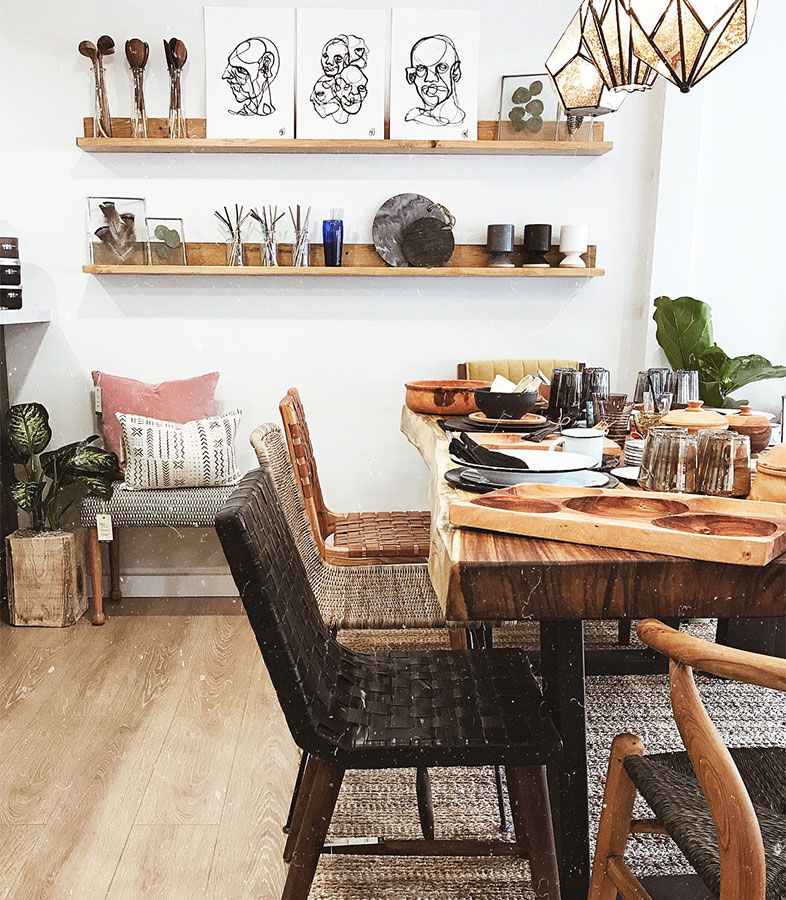 You’ll find foodies and hipsters gathering at Tijuana’s luxe food court—and then some more at its second location. The original concept started as a cohort of food trucks in 2014 and now stands at Avenida Melchor Ocampo 2036. The second location, opened this year at Bulevar Agua Caliente 8924, is a worthy successor. There’s Humo, pairing sandwiches with sides of street corn; La Carmelita, plating traditional Mexican dishes inspired by the cooks’ grandmothers and mothers; Charcutería Cafalli, slicing up homemade Italian meats and sausages in sandwiches and salads; and Miso Poke, putting a Baja twist on the Hawaiian cuisine. As a head-turning mural of a certain someone in the new park goes, "Food has no walls."

Situated in the CECUT, Tijuana’s major cultural and performing arts institution, this French restaurant has an upscale, romantic vibe with a menu of stuffed chicken breast, filet mignon, and boullabaisse. It’s led by the family-run Grupo Plascencia, the people responsible for beloved TJ eateries like Caesar’s and Villa Saverios. It’s a high-end date night for a fraction of the price you’d pay in San Diego.

Want a taste of Southern Mexico? Better known as La Cabaña del Artista ("The Artist’s Cabin"), Riochia7 turns out dishes from the state of Chiapas, like a tuna ceviche with mango, strawberries, and a sauce made of seven different chiles; lasagna made with the mushroom-like huitlacoche; and tascalate, a traditional Chiapan drink made with chocolate, roasted maize, ground pine nuts, achiote, vanilla, and sugar. They’ve kept adding new dishes to their lineup ever since their 2013 opening, like nido de codorniz (a poached quail egg tapa) and homemade French toast with ricotta cheese, honey, and berries.

Open since January, this chic Italian bistro has an inviting white marble bar, classic half-dome wood-fired pizza ovens, and a breezy outdoor area filled with rattan patio chairs that could transport you to Italy. The menu isn’t cheap by Tijuana standards—up to $13 for an entrée—but if you can swing it, there are salads, organic rotisserie chicken plates, and excellent pastas. We love the Neapolitan-style pizzas, topped with über-fresh tomatoes, creamy mozzarella, and other fixings, like white truffle oil and spicy calabrese. Caccio also has a lock on wine selection; they work with a vineyard in Valle de Guadalupe on exclusive vintages.

Fresh ingredients is the number one rule at this popular burger shop, where $7 can get you a hefty burger, whole sliced potato, and a drink. Slow Burger uses a special ground peanut seasoning on its classic cheeseburgers, surf-and-turf burgers, and their vegan version with portobello, tofu, and plant-based mayonnaise. On Wednesdays, they offer two hot dogs for the price of one, and on Sundays, kids under 7 can get a free cheeseburger.

High-quality ingredients at that poke-perfect temperature—that’s the strong suit at Baja Poke, a trendy new addition to La Recta. Start with a base of greens or white or brown rice before picking your protein (tuna, shrimp, salmon, etc.) and additions like edamame, mango, spicy mayo, and jalapeños. The presentation is impressive, too: Just look to their Instagram for proof.

Love La Taquería Vegiee food truck in South Park? Then you should try the family’s sit-down vegan spot in Tijuana. Inspriación 9 has a menu of plant-based takes on ceviche, carnitas tacos, and pozole. The sauces, like an umami-rich mole, are a highlight.

Open since October 2017, Sophia Cucina Italiana nails the Italian ambience with live music every weekend, ingredients imported from Europe and cooked by an Italian chef, and an extensive wine list. When making a reservation, ask for the table by the Sophia Loren picture—it’s the best seat in the house.

After a long night out in San Diego, you reach for a burrito. In Tijuana, you head to this truck, which whips up sandwiches stuffed with chilaquiles. Try the classic, with either eggs, chicken, steak, or marlin. Like any good Mexican spot, the salsa lineup is strong, with seven choices including cilantro and a five-alarm habanero. They’re massive sandwiches served in no-frills plastic baskets—just what you need post-cerveza.

Duck into this petite oasis, where gourmet balls of chocolate sell for 15 pesos apiece (about 72 cents). The most popular flavor at the year-old boutique, and our favorite, is cassis with vino tinto (red wine), but you can’t go wrong with flavors like tequila or queso de cabra (goat cheese). Snag a few to taste and walk out with a box or packaged gift for a friend.

Head down the set of stairs next to the iconic restaurant La Justina—or enter from Avenida Francisco I. Madero between Calle Salvador Diaz Mirón (Cuarto) and Carrillo Puerto (Tercera)—into a covered courtyard known as Pasaje Gómez. There you’ll find this humble but mighty stylish coffee shop decked in palm print wallpaper and neon signage. They turn out all the standard espresso drinks but also have sweet and savory sandwiches, as well as vegan donuts from Tijuana’s El Burro Rayado.

Launched in February, this pressed juice brand is here to "Keep Tijuana Healthy." They do that by bottling up organic produce along with vitamins, minerals, enzymes, and antimicrobial properties. Try some of the witty names, like Feel the Beet and Kale Yeah!, at Malvia Coffee Bar, Inspiración 9 Cocina Vegana, and Beauty Market, or order online for delivery (in Tijuana only).

Sure, the elevators are tempting, but we encourage you to take the artsy stairs to this rooftop bar above the hip coworking space Esquina Sara. With views over the main drag of downtown, Esquivel isn’t for the daytime traveler, opening at 7 p.m. on weekdays and even later on weekends. Snag some pork belly chicharrón and smoked barbacoa mushroom tacos from Mucha Muchacha Taquería before the space transforms into a club at night, with guest DJs spinning until 3 a.m.

While the brewery has been around for nearly a decade, this new cantina opened in December. The first thing you’ll notice is its thematic names, like La Belga Sicotica and Psycho Ale. Once you return, you’ll notice the constantly rotating lineup of craft beers, some of which you can’t buy on this side of the border. Try the saison, the coffee cream, and the Belgian IPA.

821 Avenida Revolución, between Calles 2a and 3a, Zona Centro

This longtime favorite known for low prices is giving us new reasons to visit. At the 2018 Ensenada Beer Fest, Mamut won third place in the American and Imperial Stout category and first place for its specialty IPA. Their hazy pale ale alone is worth the trip. And nothing goes better with award-winning beer than bread and cheese; grab a slice of pizza made in their wood-fire oven.

Three’s a crowd, but two’s company. That’s the premise behind Teorema Cervecería and Lúdica Artesanal’s co-tasting room. And if the minimalist design isn’t enough to lure you in off Avenida Revolución, the occasional episode of Friends playing on the tube might do the trick. Of course, it’s the brews that are the real draw. Go for a sampler flight for tastes of each brewery’s bests—Goses, IPAs, and Kölsches—and also some of their limited-edition collaborations.

Three gins, one vodka—that’s the spirit! Enmienda 18’s name is a shout-out to our country’s 18th Amendment and Prohibition, when San Diegans had to cross the border to drink. Distilled by Tijuana’s Agua Caliente Distillery, the labels include Vodka, Gin Añejo, Gin Jamaica, and Gin Cítrico—the latter an American Distilling Institute award winner in 2018. Find it in Tijuana liquor stores, or mixed into cocktails around town at restaurants including La Casa de la Tlayuda, Misión19, Villa Saverios, and La Casa de la Lasagna.

It may be petite, but this design boutique opened in May with an enviable collection of art, furniture, tabletop pieces, and more, with 80 percent of the inventory created by Mexican artists. The printed pillows, rocking chairs—Food Network star Marcela Valladolid has scooped one up—and welcome mat are some of our favorites.

Launched by three Tijuana natives, this accessories company specializes in bespoke leather pieces in bags, wallets, suitcases, and shoes. Most recently they debuted more women’s footwear, including oxfords, loafers, and boots ranging from $80 to $125, and a new retail space (closed on Sundays) in the boutique hotel One Bunk TJ.

Situated within the Vida Spa Urbano day spa, this shop sells eco-minded skin care and makeup products, like waterproof mascara blended with almond oil from the Mexican brand Ere Perez, as well as matcha and a fridge full of pressed juices from Tijuana’s 360Juice.

Owner Anaí Cano designs toys, accessories, and play tents so slick they easily double as kid-room decor. Handcrafted with 100-percent organic cotton and wood free from harmful chemicals, Cano’s Tangerine Toys can be found at The New Children’s Museum store and at San Diego maker events like The Queen Bee Market and Makers Arcade (follow @tangerinetoys on Instagram for news on upcoming pop-ups).