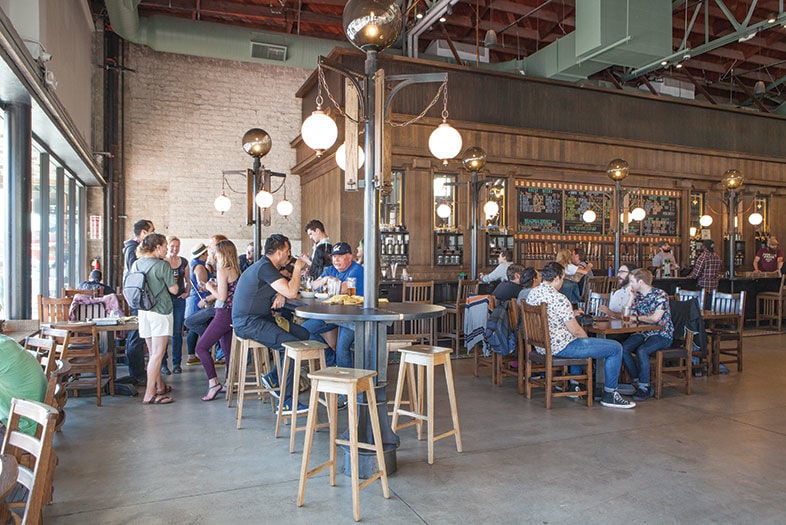 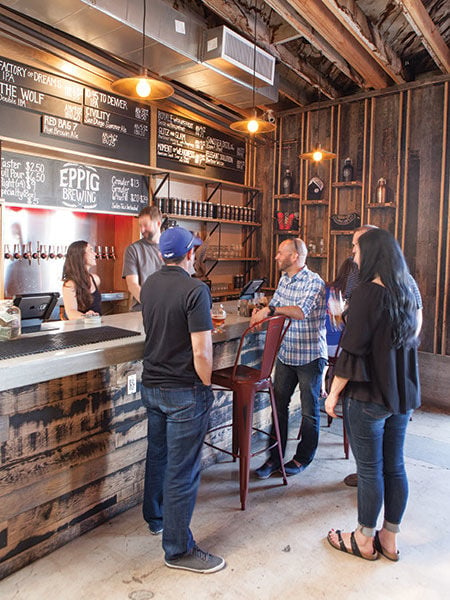 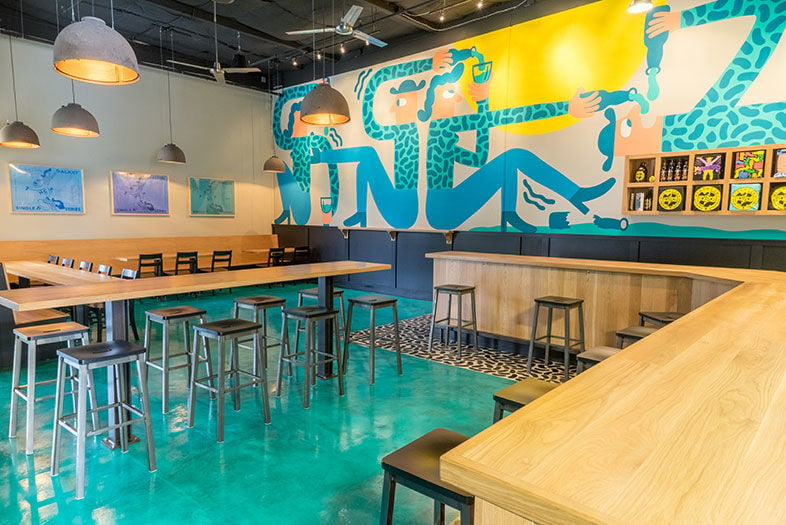 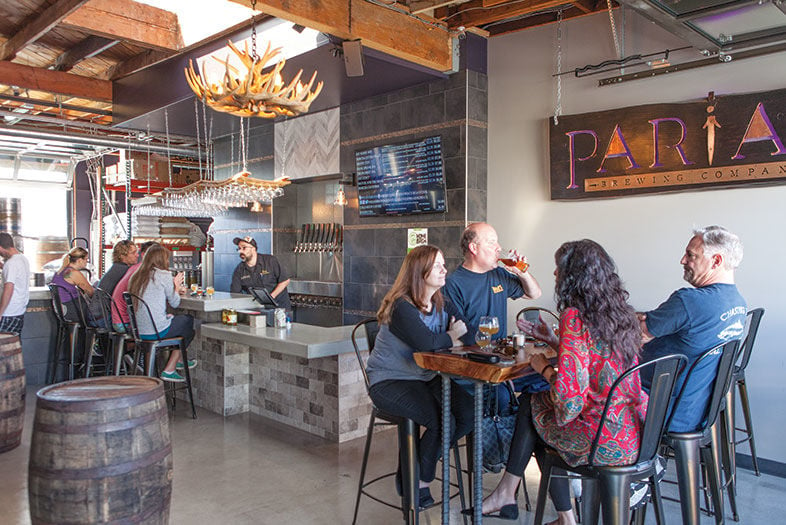 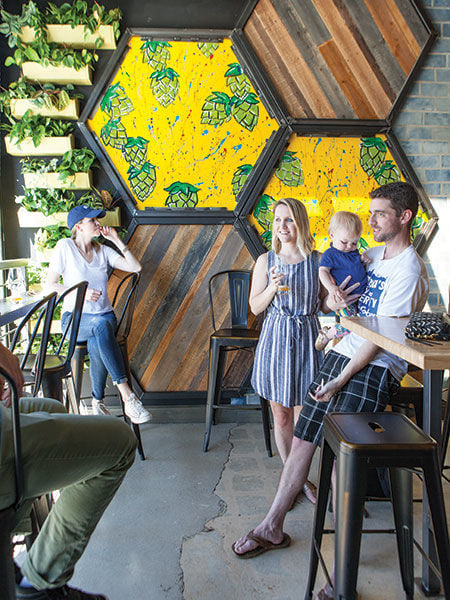 Our pints runneth over. For the past few years, San Diego’s beer scene has been one of the fastest growing anywhere. The current brewery count is about to crack 140, and nearly two dozen newbies have entered the game since our last beer issue. They’re spread out all across the county—in Carlsbad, El Cajon, and Valley Center, as well as in the already beer-dense areas of North Park, Mira Mesa, and Ocean Beach.

Carlsbad is finally poised to enjoy its own little brewery boom. The area’s newest is only a few minutes from Pizza Port Bressi Ranch and Culver Beer Co., a nice addition to the local craft beer scene. Burgeon’s tasting room is spacious and simply designed, with green elements that underscore its theme of planting roots in the community. There’s something for every taste on the tap list, but hop lovers will be especially happy. There are many IPAs, as well as a few tasty and hoppy pale ales (brewmaster Anthony Tallman is a Stone alum who has also brewed for Rough Draft and Backstreet). In addition to the lemony Lot 19 Pale Ale, the Thuja IPA is a standout, with lemon and grapefruit on the nose and a balanced body—medium-bitter without being astringent.

Buddies Jeff Wiederkehr and Mike Maass loved homebrewing together so much that they decided to start their own pro brewery. El Cajon had been without a brewery for about six months when they opened, so it didn’t take long for Burning Beard to be embraced, not only by locals, but also the beer-drinking public at large. Within months, they were one of the hottest new brands at the top local spots. Hits include Dankness Visible IPA, Rye the Lightning Session IPA, Holy the Voyd Coffee Stout, and Banksy ESB (extra special bitter), which—in our humble estimation—is the best ESB in town.

Married team Stephanie Eppig and Todd Warshaw did it right: They knew the secrets to eventual success were beer quality and talented brewers. With Ballast Point alums Clayton LeBlanc and Nathan Stephens working the brewhouse, Eppig has been able to hit the ground running. Their hoppy beers are notably bright and well-balanced, especially the Even Better Session IPA, which manages to satisfy hop cravings with only 4.4-percent ABV. Other standouts include their Glitz and Glam Berliner Weisse and lineup of German-inspired "Natural Bridge" beers, which includes a super-tasty Zwickelbier. They share a building with Pariah and San Diego Brewing, which are also on this list.

It started off small, with a three-barrel system on a quiet street in Grantville, but Groundswell lived up to its name within its first three years, expanding into the Santee production space that was abandoned by Twisted Manzanita. It was a big leap of faith, but this brewery has worked hard to establish a place for itself in San Diego. The solid beers from their original lineup taste even better now, and there’s a growing list of varied styles on tap. Standouts include the citrusy Undulation White IPA, their crisp Mango Tart (Berliner Weisse style), and the Piloncillo Brown Ale, which delivers chocolate, toffee, caramel, and vanilla flavors in a light, balanced package.

For years, Denmark-based Mikkel Borg Bjergsø has enjoyed a large following on the international craft beer stage. He was known as a nomadic brewer who popped up in various places to brew great beers in all kinds of borrowed locations. Since then, Mikkeller Brewing has become a bit more stationary, and this year it became San Diego’s first European-owned craft brewery. Bjergsø decided it was time to settle down a bit more when he learned that the old AleSmith location was up for grabs—along with its entire brewing system. Mikkeller is probably best known for its darker, maltier beers—most notably Beer Geek Breakfast Stout—but the brewery is currently churning out a dizzying number of new varieties, like interesting and unique takes on IPAs, kettle sours, and Belgian-style beers.

There’s no lack of pubs in North Park, but there is a conspicuous dearth of breweries. North Park Beer Co., which opened on University Avenue just a block from Mike Hess Brewing—and within a stone’s throw from Toronado and Waypoint Public—is an interesting addition to the neighborhood’s beer landscape. Unlike many new breweries, this large space is an architectural destination in itself; it’s beautifully designed, spacious, and well equipped with a long bar, large tables, and very cool mezzanine space. Founder Kelsey McNair made his reputation as the award-winning homebrewer of Hop Fu IPA, but his McNair Scottish Session Ale and Ray Street Red are also tasty, nicely made quaffs.

Every once in a while a new brewery opens with a vision that stands out from the rest. Pariah is one of them. Head Brewer Brian Mitchell has crafted a lineup that’s both accessible and creative, with unique twists and intriguing ingredients that actually enhance the beers instead of eclipsing them. Pariah has started off small (it’s one of a trio launched by the Brewery Igniter program in North Park) but obviously has big aspirations. Among the most captivating initial brews are the Off-White Wit brewed with honey, jasmine green tea, lemongrass, orange slices, and ginger; the winter seasonal Uni Stout brewed with San Diego sea urchin roe; and the stellar Erotic City, Belgian-inspired ale brewed with orange blossom honey, muscat grapes, and grains of paradise.

From a brewery standpoint, our vibrant downtown has not kept pace with the rest of San Diego County. That’s why it’s nice to have a few more breweries opening within the metro area. Resident Brewing Company, which shares space with craft bar The Local, has a solid lineup of well-made beers, along with a few interesting twists on classics. The Hall Pass Pale Ale and Perky Blonde are standouts for their highly satisfying flavors and aromas (both delivered for less than 5.5 percent ABV), and the crisp, hoppy, well-balanced Vacation Coconut IPA strikes just the right balance of coconut flavoring.

These guys have been a part of the San Diego brew scene since its inception. Now, thanks to a brand new facility, they are finally commanding the attention they deserve. For years, Jeff Drum was relegated to working in what amounted to a large closet in order to supply suds for their Grantville brewpub. With a new 10-barrel system and much more space, Drum and his team are finally spreading their wings. The initial lineup includes all their popular classics from the brewpub—a portfolio of clean, well-balanced, and eminently food-friendly brews—with the San Diego Gold blonde ale, Old Town Nut Brown, and San Diego Amber being especially flavorful, easy-drinking beers.

Tucked into a small, unassuming business park space, the tasting room is cozy, inviting, and unpretentious. Although inside space is tight, it opens to an outdoor area that provides plenty of room, seating, and sunshine. The beers are all solid, but the pale ales shine in particular—not only for their satisfying hop-juiciness, but also for their variety. Sun Zener, Planet Rock, and Electric Youth Coffee Pale Ale are among the best, and the Over There was our favorite new dunkel of the year.

*Not technically new, but has moved to a new location with bigger equipment and might as well be a whole new operation.