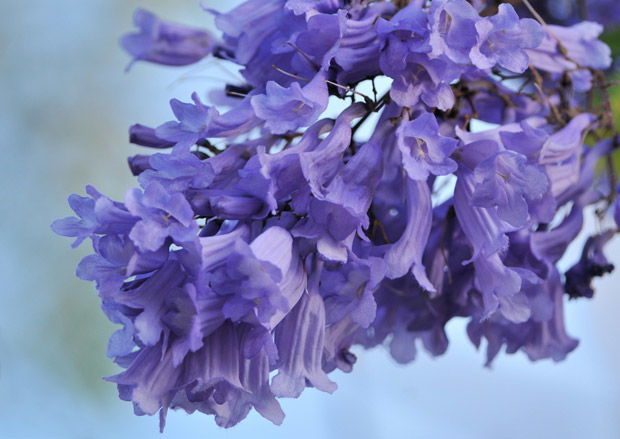 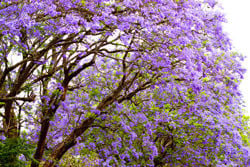 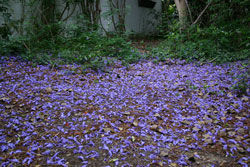 Jacaranda Tree blossoms on the ground

As I’ve been driving to work the last couple of weeks (months), I couldn’t help but notice the beautiful violet-blue trees. Every year between May and July these trees grace our streets and parks with their vibrant violet blooms. I know they are called Jacarandas, but I never knew where they originated. So I thought I’d do a little research.

The official name: Jacaranda mimosifolia were first introduced here by botanist/horticulturist Kate Sessions (a.k.a. The Mother of Balboa Park). She planted hundreds of trees in the Park using seeds from all over the world. She was responsible for much of the early landscaping for city parks throughout San Diego.

In Southern California they bloom twice a year (spring and fall). In 2000, the jacaranda became the official (non-native) tree of San Diego due to the efforts of Village Garden Club of La Jolla member Donna Derrick.

The clusters of lilac-blue, trumpet-shaped flowers appear in late spring on the tree's bare grayish-brown branches, creating a striking contrast in color. Before the tree's full foliage appears, the flowers fall to the ground, forming a velvety blanket of blue. By mid-summer, the tree will be covered with fernlike green foliage that provides filtered sunlight. Later in the season, leathery seedpods will appear where the flowers once bloomed.

If you missed them this time, no worries, they will be back in the spring. And the blooms are supposedly even more spectacular than the fall.

On Hillquest you’ll find a mapped-out "Jacaranda Walk" of notable trees in and around Balboa Park.