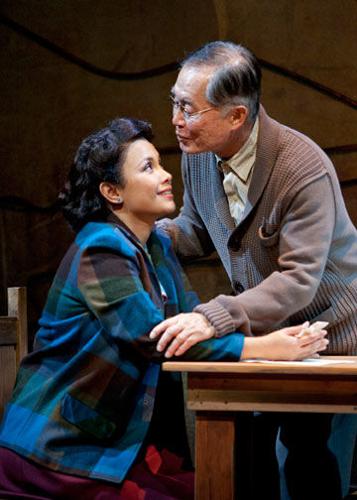 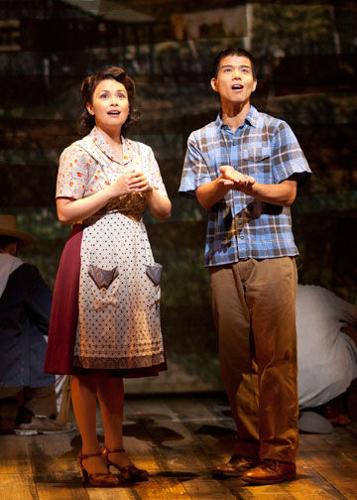 Lea Solanga and another actor

It’s very cool that people like George Takei (Star Trek icon) and Lea Solanga (Disney and Broadway songstress extraordinaire) come to our city to do theater.

Both actors are currently starring in the Old Globe’s world premiere of Allegiance: A New American Musical, along with Glee alum Telly Leung (hello, Warblers!) and local talents like Allie Trimm (Hannah) and Geno Carr (you've seen him play Papa Who in Old Globe's Grinch). Allegiance was directed by Stafford Arima, with music and lyrics by Jay Kuo.

The story follows a Japanese American family forced into an internment camp in the aftermath of the attack on Pearl Harbor. Generations are torn, the younger drawn to fight for America and prove patriotism, the elder tied to the honor of their Japanese ancestors (and the middle generation protesting the draft, on principle). A young Sammy (Leung), just elected to student council, has the world at his feet. But everything changes when his father has to sell their Salinas farm (for ten cents on the dollar) before they are sent to Heart Mountain Internment Camp in Wyoming.

The subject matter bears personal significance as Takei himself was incarcerated at Camp Rohwer and Camp Tule Lake, and fellow Allegiance actor Paul Nakauchi is a child of camp survivors.

It’s an intense and very tragic historical account. The woman in the seat next to me was especially tearful, and there were several sniffles in the house.

The story of the internment camps is one that needs to be told, although the medium (musical theater) was an interesting choice. It was very heavy—a swing dance number and jitterbug choreography almost seemed jarring. Plus, I was a little starstruck.

Readers might have to be theater geeks to fully appreciate this, but Lea Salonga, who plays Kei Kimura, is best known for her vocal performance as princess Jasmine in Disney’s Aladdin (A whole new world!), her Tony-award winning portrayal as Kim in Miss Saigon, and her turn as Eponine in Les Miserables.

Salonga really carries the show. Give the girl a powerhouse ballad and she’ll take it from there. Just hearing her sing, takes me back to the late ‘90s, belting "Now That I’ve Seen Her" in the shower.

And George. The veteran. I think he was a little underutilized in this production. But he performs which such joy, it’s hard not to smile while watching him.

The 75-year-old really comes through in the end, delivering a moving monologue in the final moments of the show.

Again, I just think it’s cool that San Diego is a theater town, and that people get excited about new productions.

Show your allegiance to theater and new ventures like this one, now on the Shiley Stage through October 21.