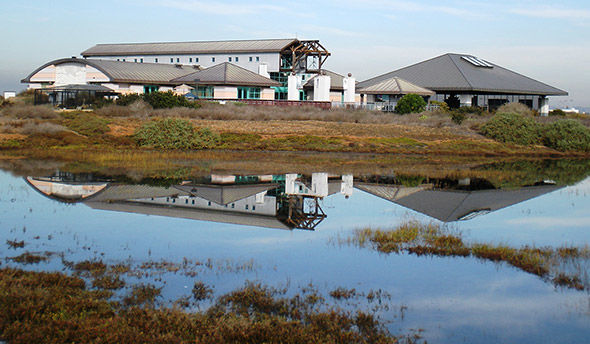 Visit chulavista100.com for all the details.

At the time of its completion in 1888, Sweetwater Dam constituted the tallest masonry arch dam in the nation—and, at over 90 feet high, serves as an inspiration for engineers to this day.

Founded in 1889, the club hosts events for the whole family throughout the year, including races, cruises, and fishing tournaments.

First opened in 1918, this general aviation airport was used for military purposes until the 1960s.

The county’s oldest country club lays claim to the only private golf course in the area.

The current City Hall building opened its doors in ’51, some 39 years after the original structure was donated to the city.

More than 100 specialty shops and department stores can be found at this retail hub, which first opened its doors in 1962.

With stations all across San Diego, the trolley has offered access to everything from Qualcomm Park to the Mexican-American border.

A world-renowned zoo and aquarium, the Nature Center boasts a plethora of local plants and wildlife.

One of the official centers for the nation’s top athletes in track and field, soccer, and more, the training center is open to both Olympic hopefuls and the public.

Offering seating for up to 20,000 visitors, the venue was the first in the area designed for music.

The construction of the upscale shopping center marked the area’s first major market opening in 20 years.

With a whopping 11,000 grandstand seats, the raceway has hosted several motocross tournaments since its completion in 2007.

CV native Mario Lopez has asked the public to donate to the Community Youth Athletic Center of Chula Vista in honor of his daughter’s first birthday. Visit myregistry.com for details.