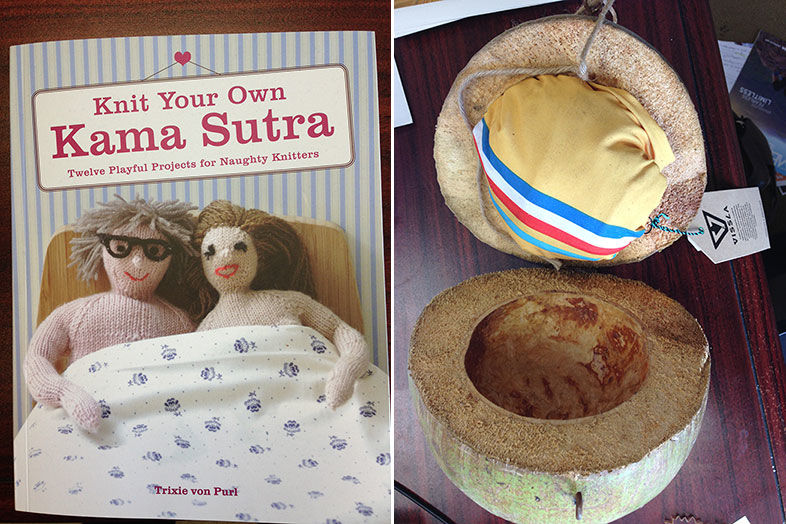 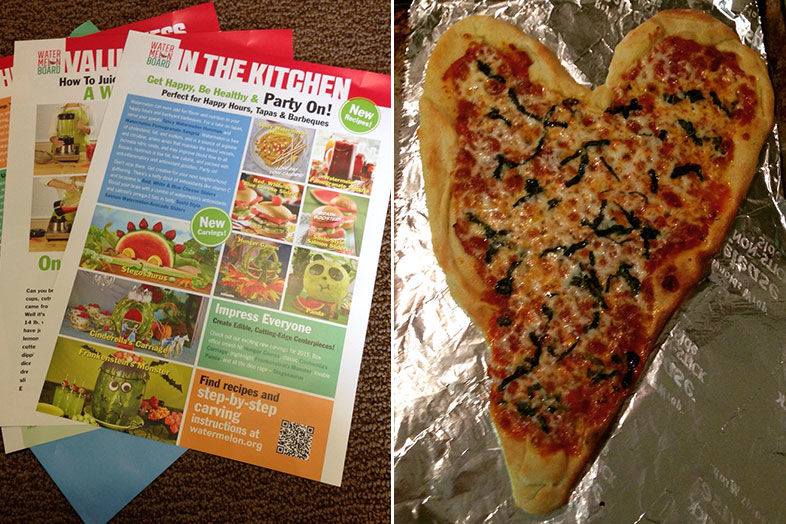 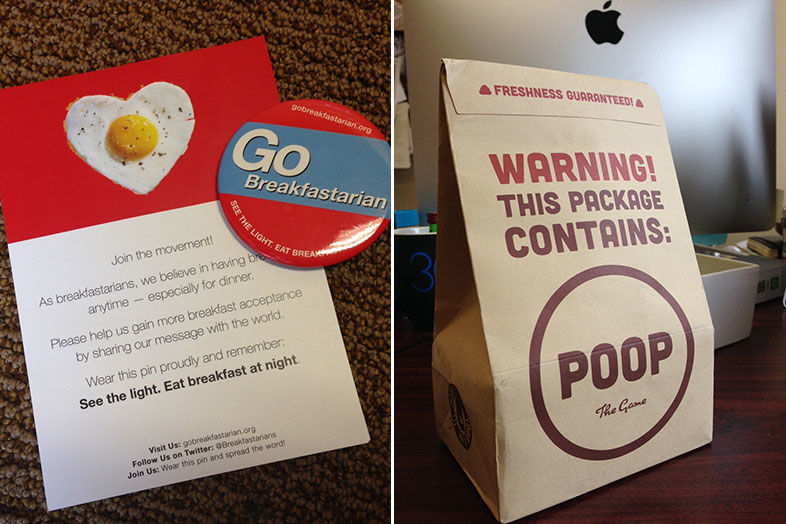 Cleaning out my office again. A lot of curious and questionable items have landed on my desk, and it’s time for a purge. Warning: Some of this stuff is NSFW. Some of it is just crap. I’ve noticed office decorum goes out the window when you’re caught holding "Poop in a Bag." The interns are starting to lose respect. Here are a few things that have been pitched to me recently:

NSFW: Knit Your Own Kama Sutra

This book for "naughty knitters" shows knit figurines getting down in all kinds of positions on the beach, in a movie theater, and on an airplane. There’s even a scene with a hooker in what appears to be a motel room with a heart-shaped headboard and money strewn all around. I am still trying to process it all.

Board shorts made of coconut, in a coconut

Vissla sent upcycled coconut stretch board shorts that feel just like your regular trunks. Founder Paul Naude was President of Billabong before he resigned in 2013 and started Vissla. The company won "Breakout Brand of the Year" at the SIMA Image Awards. And they’ve got three team riders from San Diego: Lucas Dirkse from Windansea, Zach Mccormick from Solana Beach, and Derrick Disney from Cardiff. So there’s that.

Recipes from the National Watermelon Promotion Board

A high-spirited newsletter announces the many uses of this melon, including watermelon hummus, salsa, and sangria. The mighty, all-purpose fruit can be juiced, risotto-ized, and carved into a stegosaurus or Cinderella’s carriage. Yes, but more importantly, if it’s 92 percent H20, can we use it to water the lawn?

Sammy’s Woodfired Pizza sent me a kit to make a heart-shaped pizza at home. I actually did it. It was for a Valentine’s Day promotion in which I instagrammed my creation in order to be entered for a gift card. At the end of the day, Sammy showed no love for my pizza.

The Breakfastarians would like us to "join the movement." They believe in having breakfast at any time, "especially for dinner." They think the world could do with more "breakfast acceptance." So the Breakfastarians sent this pin in hopes we would "See the light. Eat breakfast at night." Don’t we have more important issues to spend our time and money on?, I thought as I ate a burrito dinner for breakfast.

Poop in a Bag

A San Diego father, age 30, and his 8-year-old son developed a card game revolving around bowel movements. Their Kickstarter campaign was still going at the time of delivery, so I guess the deck of cards they sent me was just a prototype and not a reality. Which means, in the eyes of an editor who deals in fact-based things, it’s a load of crap. The Kickstarter video explained nothing concrete about the actual product, how the game is played, etc. All they told us was that there was a Spanish edition named Caca: El Juego. I considered bringing this game home to my 9-year-old stepson, but there is already enough farting and bathroom humor in my house. I thought, Shouldn’t I be responsible for elevating the conversation around here?