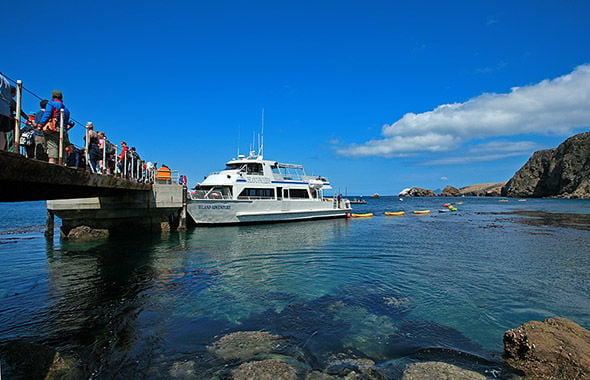 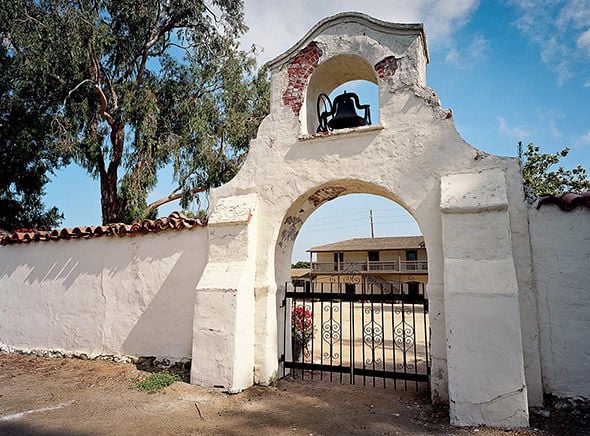 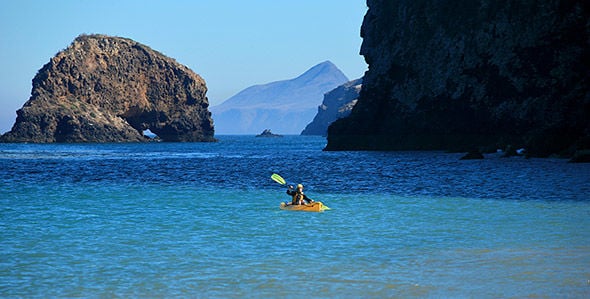 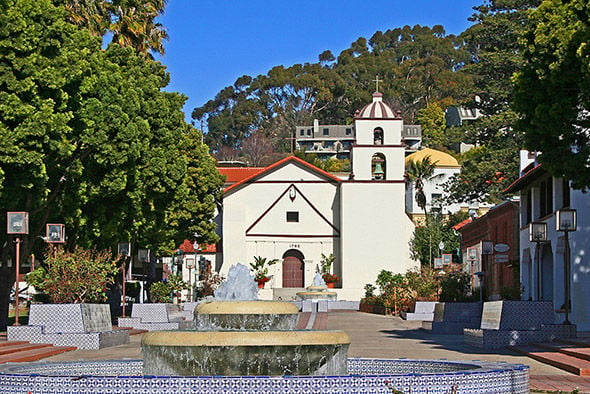 Diverse and ecologically rich with 2,000 terrestrial plants and animals, these islands are often called the Galapagos of North America

Ventura, California: Home to an 18th-century mission, the Patagonia headquarters, and great surf. In the past, the town represented a series of freeway exits—that I’d blow past en route to points north—announcing that Santa Barbara was only 25 miles away. But recently, the sleepy surf town has taken on a new meaning as the gateway to the alluring archipelago of the Channel Islands.

"Only an incredibly small percentage of the California population ever ventures out there, and it’s a hidden jewel," exclaims Cherryl Connally, owner of Island Packers, the family-run company that ferries the curious from the mainland.

At 7:45 a.m. Saturday morning, we are greeted by our affable guide Fraser Kersey from Channel Islands Outfitters. Some 100 day-trippers, kayakers, birders, and campers board the quaint ferry. Jimmy, our captain, with a radio-smooth voice and keen sense of humor, narrates the 60-minute ride. Secretly, I am praying for a blue whale sighting (my first) as they feed in the marine life-rich waters off the islands during summer before heading back to Costa Rica. It’s a foggy gray morning but our spirits lift when a passenger spots a spray in the distance and we encounter a 90-foot mother with her young calf. We follow their ballet briefly until they disappear again, and then head off to the islands before us.

Anacapa, to the left, is known for its isolated beaches and exceptional diving. Dead on lies Santa Cruz, our destination, once a privately owned sheep ranch. Thankfully, five of the California Channels, Anacapa, Santa Cruz, Santa Rosa, Santa Barbara, and San Miguel, have been part of the National Park System since 1980 to limit visitation and protect the biodiversity, archaeology, and this Southern California natural heritage.

At Scorpion Bay, we disembark and find the ever-energetic "JD" (Johnny Dresser, co-owner of Channel Islands Outfitters) who waits next to a matrix of red kayaks and accoutrement, eager to get us paddling. We gear up, practice strokes, and talk safety, and then shove off the rocky beach in wet suits, dry jackets, and helmets. JD leads us on a three-hour paddle along the island’s edge and into its mysterious sea caves.

Coral, plum, and rust-colored sea stars cling to the cliff’s edge while noisy Western Gulls nest above in the nooks and crannies, protecting their newly hatched babies. In a cavernous hall where our voices echo, we spy a rocky beach where sea lions give birth to their babies, blending into the rocky landscape. A bright Red-footed Pigeon Guillemot returns with food in its mouth and disappears into a rocky ledge.

A curious harbor seal with the eyes of a loyal dog follows behind us as we dip our paddles into the clear waters, glissading over the expansive kelp beds. JD pulls up a giant sea plant and offers my daughter a piece to eat. He then teaches us the sport of rock gardening where you navigate your kayak through tight turns and narrow passages between rocks and outcroppings, waiting for a swell to rise at the perfect moment to paddle forth.

A storehouse of knowledge, JD expounds further on the islands. If you want to dive and camp on Anacapa, don’t go in spring as it’s home to the largest gull rookery in the world, and there’s no sleeping as they chatter all night when nesting. He points out the purple sea urchins below, explaining that a population explosion has occurred since their predators like the spiny lobster and the sea otter, decimated by over-harvesting and hunting, no longer exist in the area.

Luckily, much of the waters surrounding the islands are now protected as a marine reserve so the declining kelp forest ecosystems can recover. For more than 9,000 years the Chumash Indians inhabited these mysterious islands. Cattle and sheep ranches took over in the 1800s and 1900s, but thankfully, today, The Nature Conservancy and the National Park System protect this landscape, and have successfully eradicated some non-endemic species and saved others like the near-extinct Island Fox.

Back on terra firma and ravenous, we inhale the world’s best turkey avocado sandwich (which we’d packed at the Four Points by Sheraton), and then re-dress for a hike to further explore the island. A curious nimble-footed Island Fox scampers across the sandy wash as we walk to the trailhead. On the two-mile trek, we hike up high along the cliff’s edge, which affords views of the mainland and backside of the island.

Waves crash into untouched coves. We are overwhelmed by the raw natural beauty—it’s like stepping back into time, into the unspoiled wilds of California.

On the ferry ride home, a pod of commoner dolphins surround the ferry—more than 1,000 spend 20 minutes playing, surfing the wake, riding along the bow, and challenging the vessel’s speed. They are so close that the spray from their blowholes wets my daughter’s face as she squeals in awe. In every direction they shoot through the air, spiraling, diving, twisting, and twirling in a spectacular show. Seeing these beautiful creatures in the wild takes my breath away. In short, my final message is this: Don’t be part of the California majority that misses the boat. 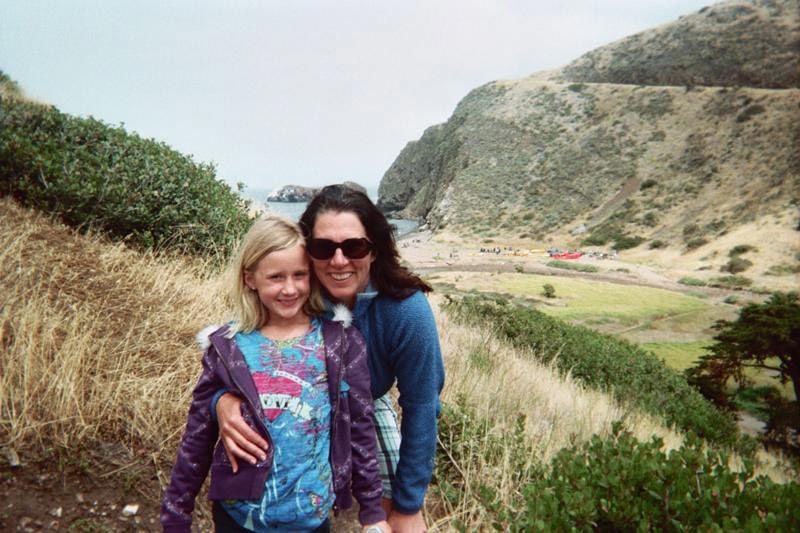 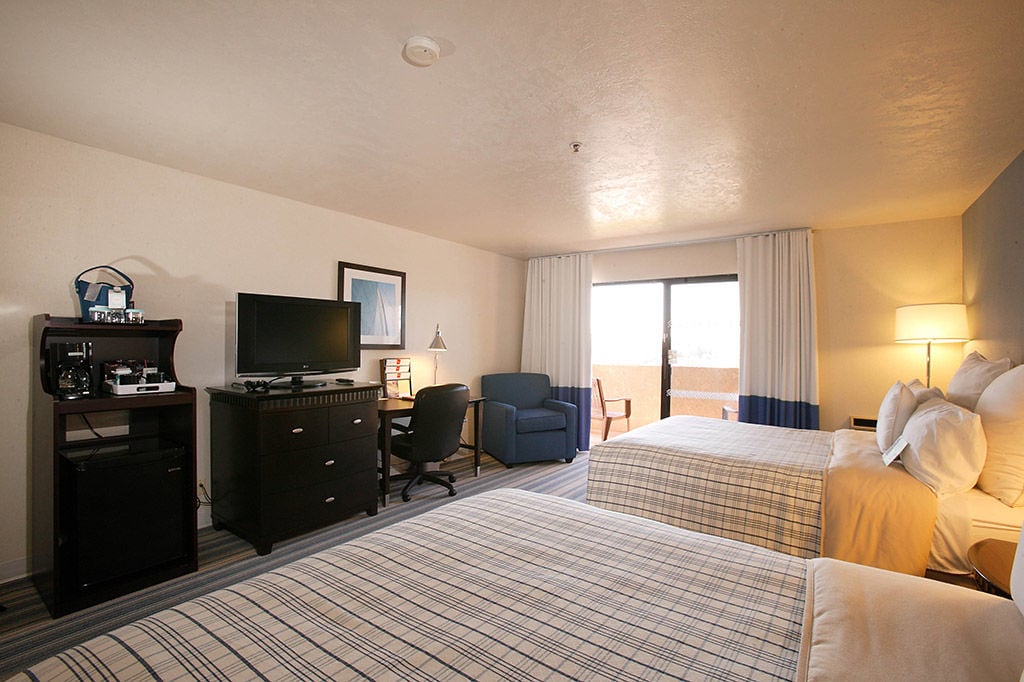 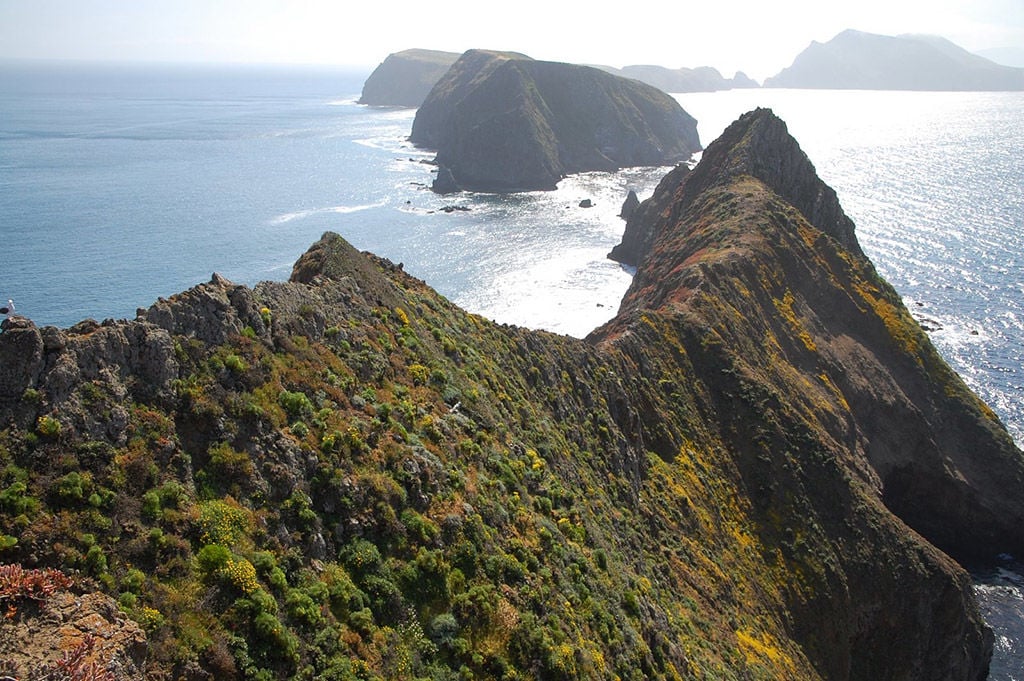 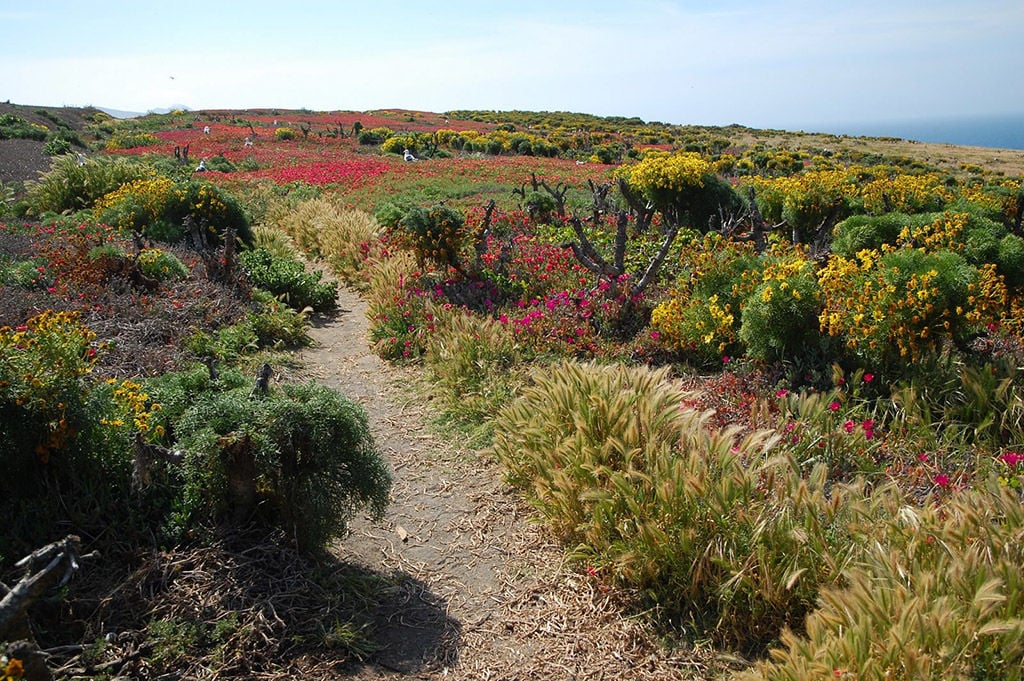 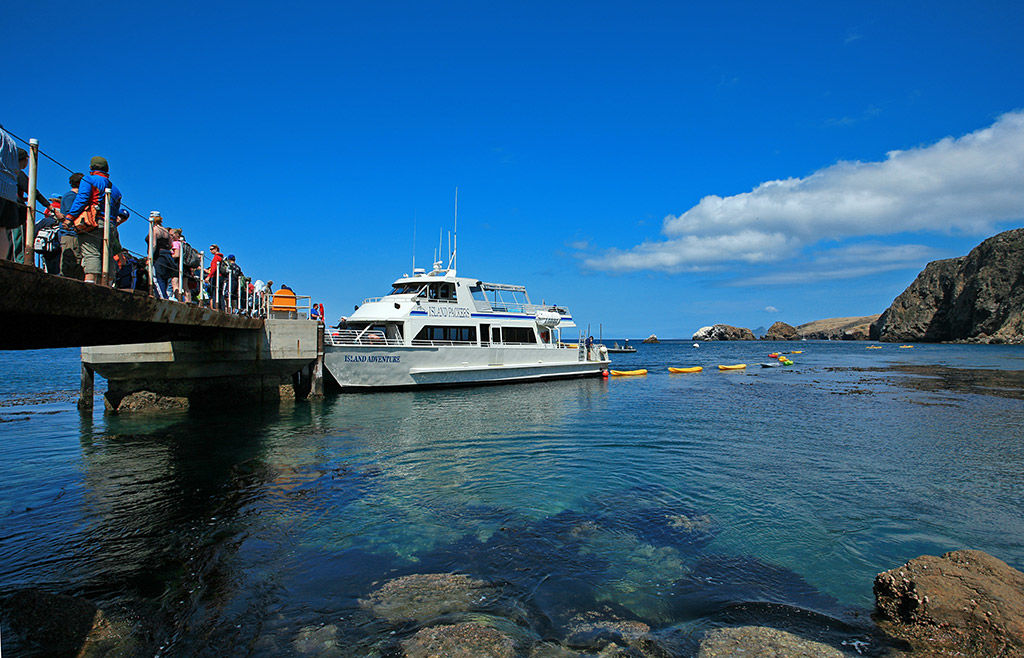 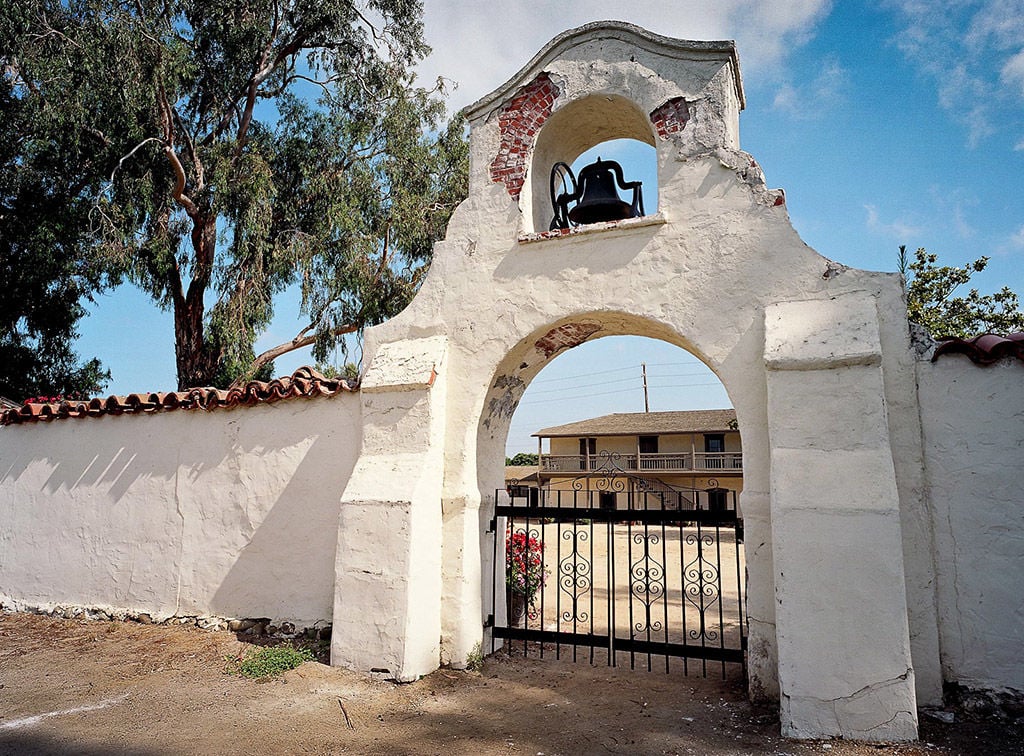 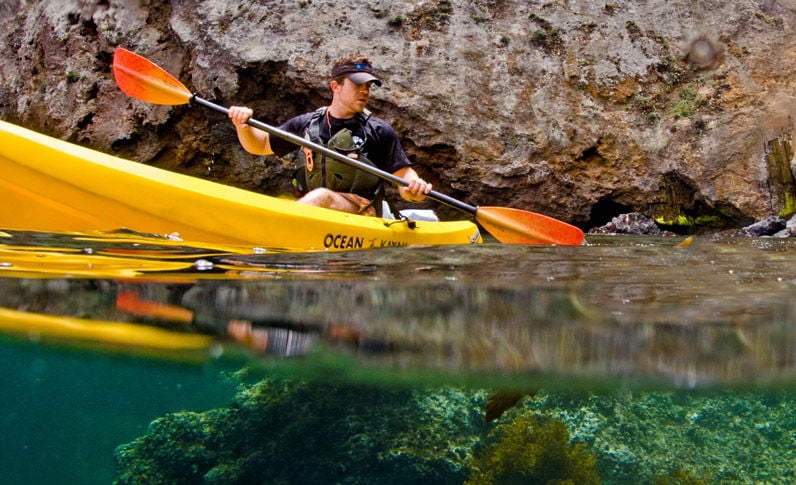 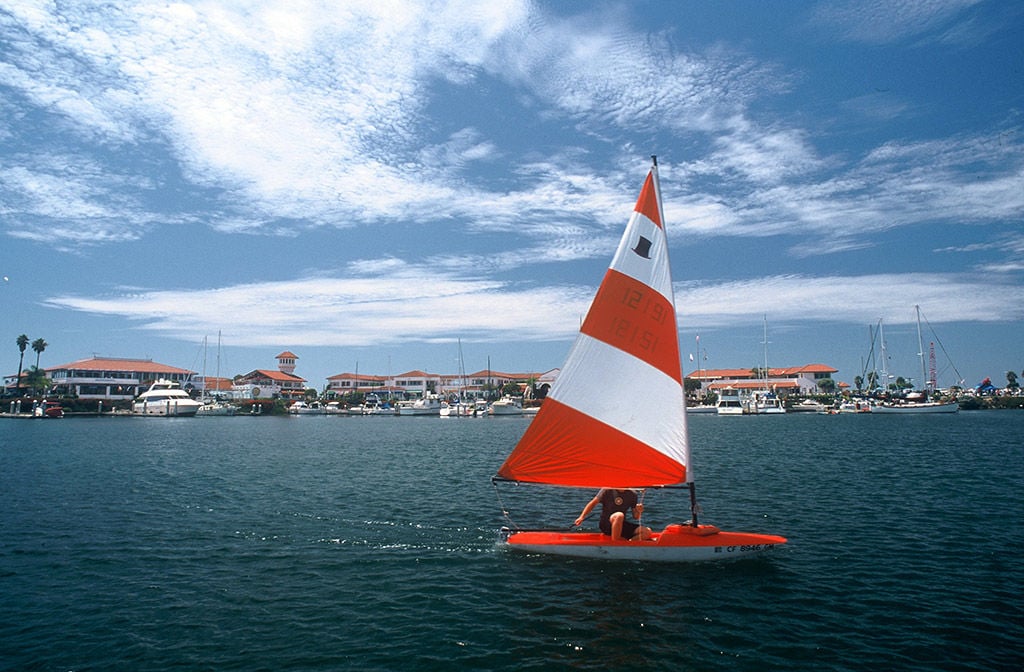 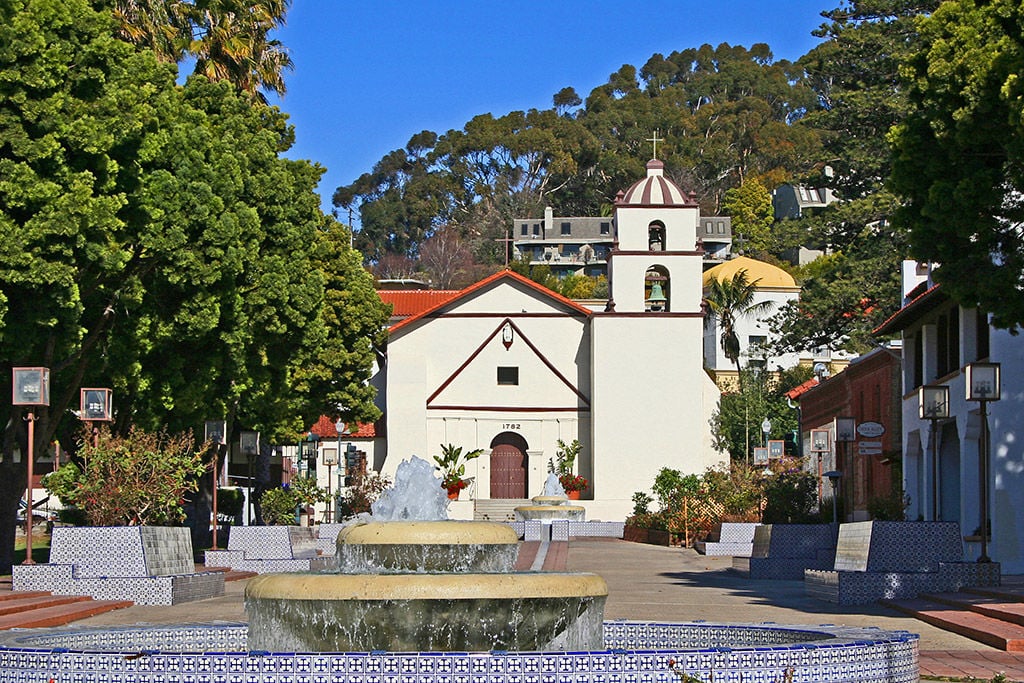 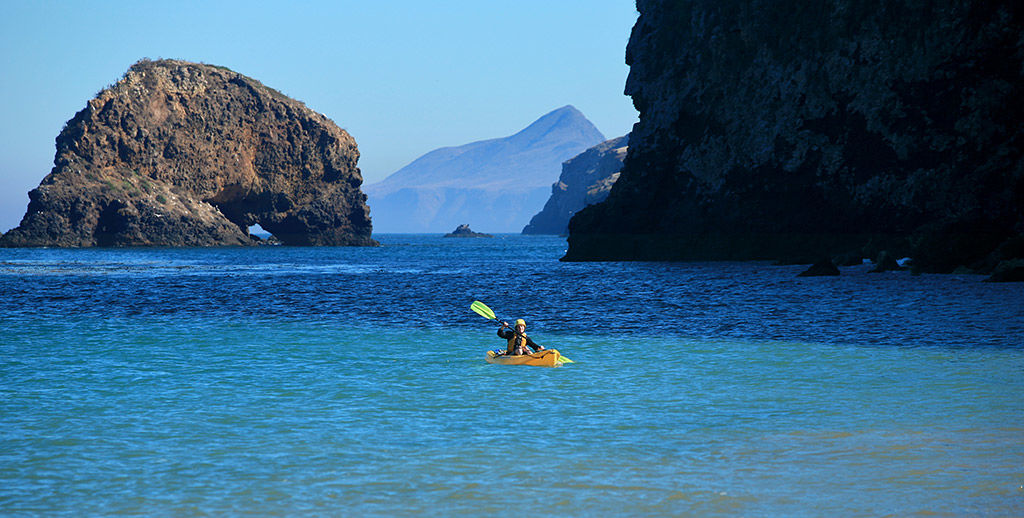 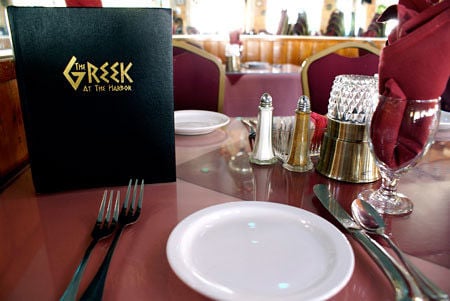