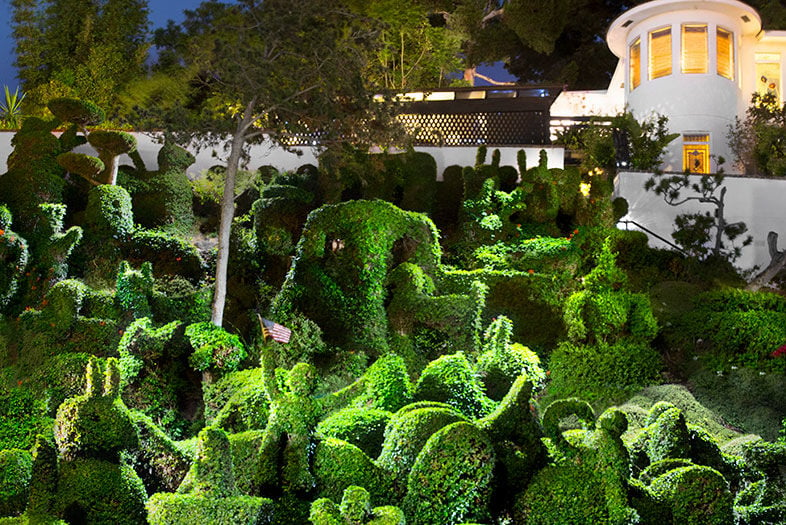 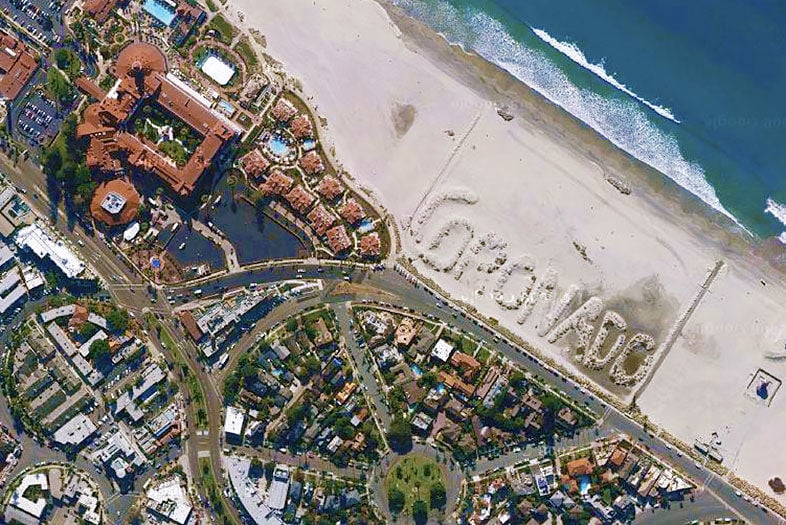 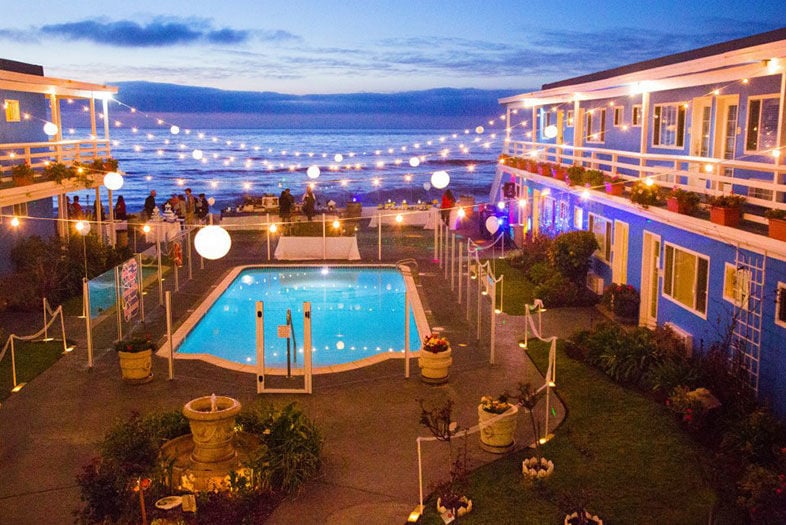 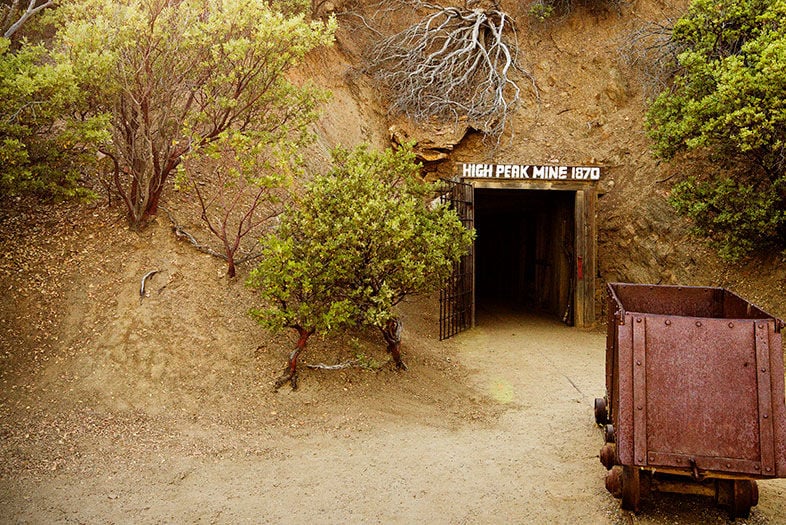 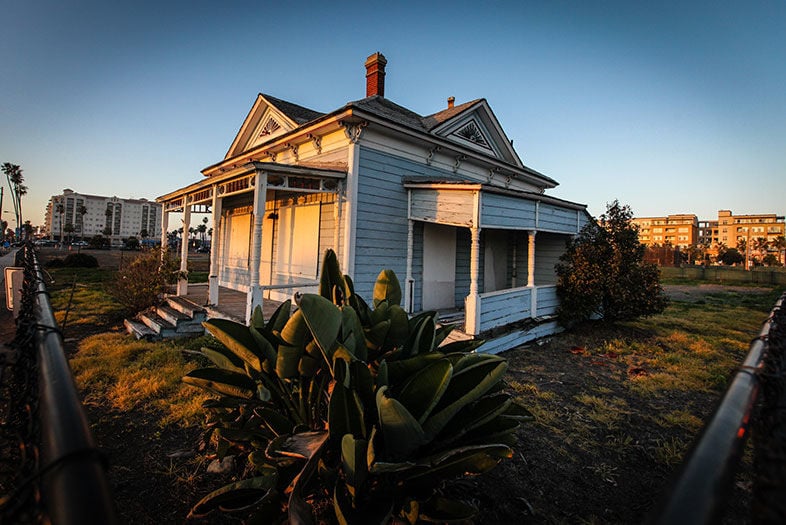 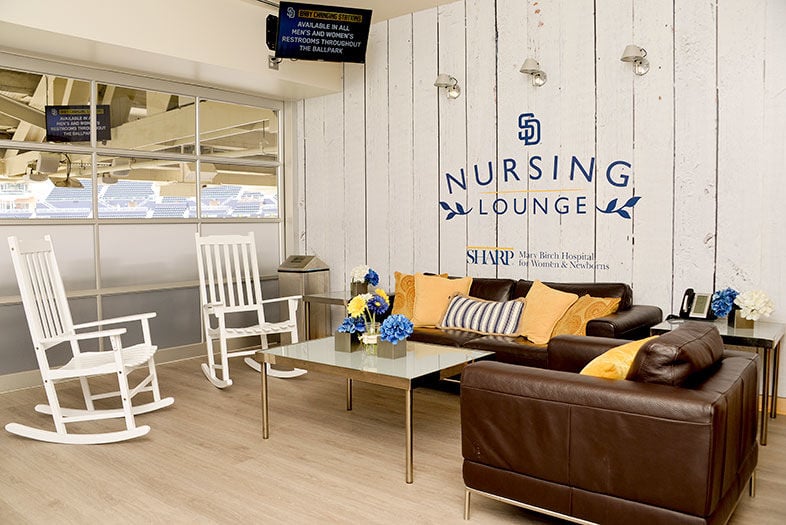 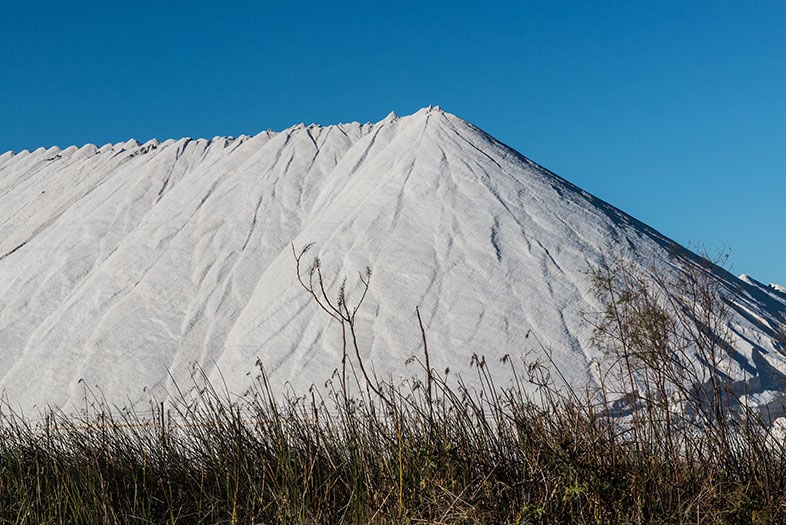 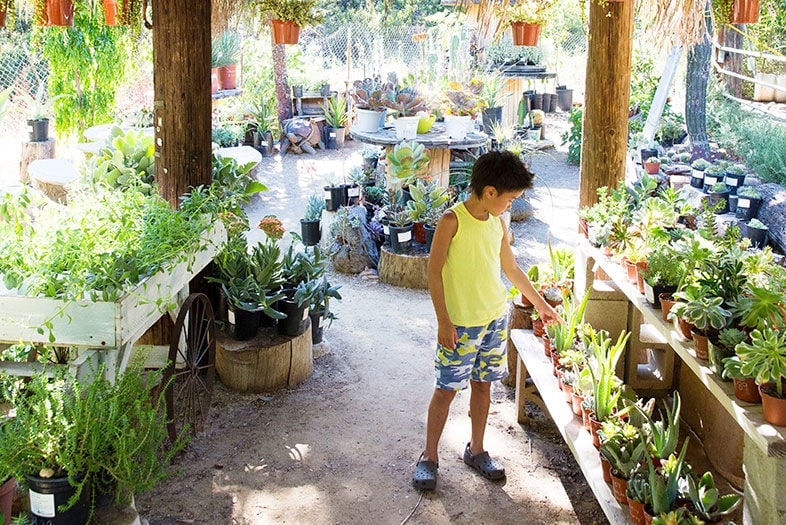 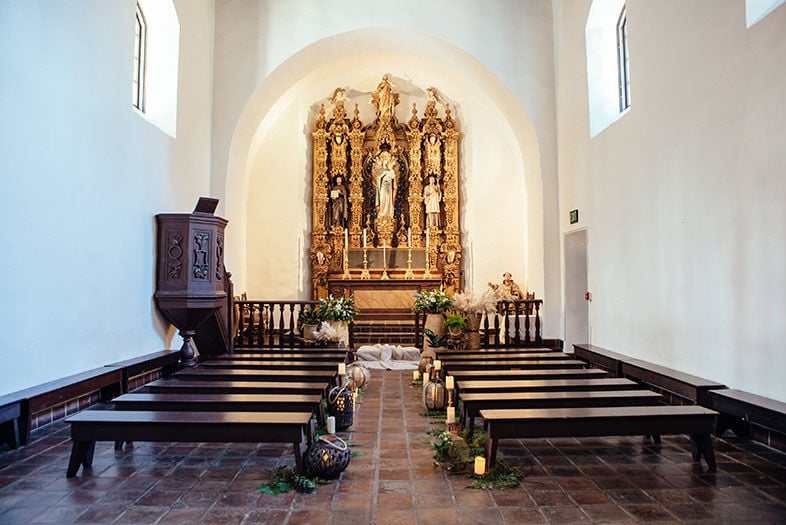 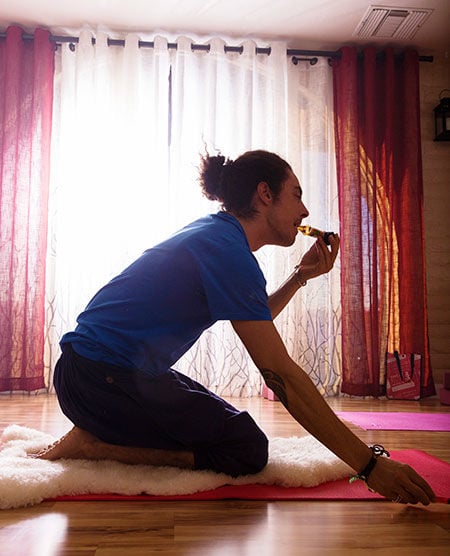 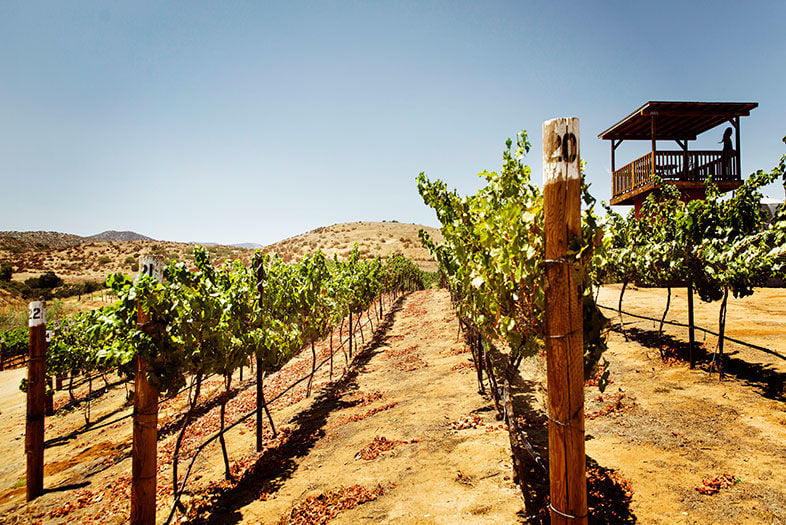 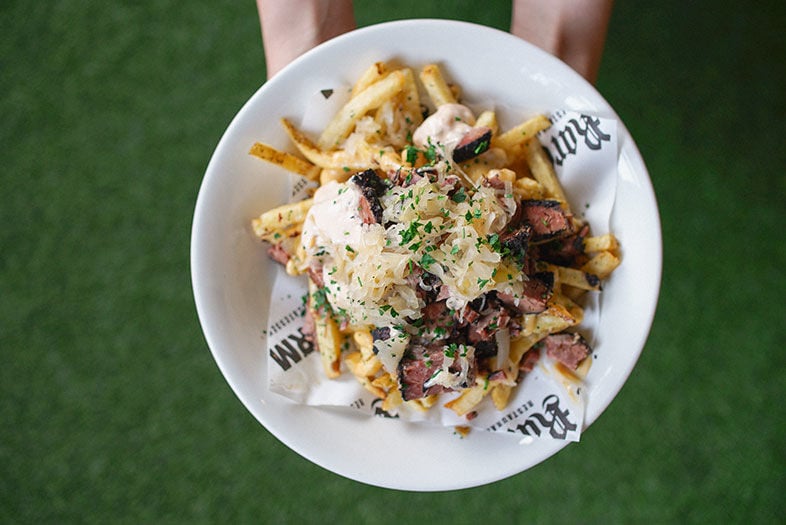 The local artist behind Harper’s Topiary Garden received the nickname "Edna Scissorhands" for good reason: She sculpted more than 50 shrubs in her front yard into figures as diverse as elephants, snakes, and surfers. The private garden has drawn admiring neighbors for more than two decades thanks to its creative landscaping.

City dwellers can get a taste of country life circa 1900 at Stein Family Farm, a two-acre living history farm museum in National City. The space has a Victorian farmhouse with original furnishings, a century-old barn, an organic garden of heirloom vegetables, and farm animals including emus, sheep, pigs, and a dwarf dairy goat. The city-owned property is considered the last original farmstead in National City. Visitors are encouraged to get their hands dirty—plant something, pet an animal, pull weeds. It’s free and open to the public on Saturdays, but also hosts weddings, craft fairs, and school trips.

Cruise by an oil tycoon’s mansion

Known for its pink color and Mission-style architecture, the "Pink Lady," aka the Canfield-Wright House, was built in 1910 by oil tycoon Charles A. Canfield, whose life is rumored to be the inspiration for the movie There Will Be Blood. Now a city treasure, his home was recently restored to its original grandeur and placed on the National Register of Historic Places.

The secret past of Pioneer Park will send chills down your spine. The grassy Mission Hills gathering place was formerly a 19th-century Catholic burial ground called the Calvary Cemetery. The city removed the gravestones in the 1960s to build the park, but 4,000 bodies still remain underground.

Read a hidden message in the sand

If you’ve ever walked along the beach near Hotel del Coronado, you have probably noticed these sandy heaps of ice plant and seaweed but never thought much about them. Turns out, they form the words "CORONADO" and "BEACH." The full effect is only really visible from the air (or Google Maps). According to an article in the Union-Tribune, the artful sand dunes date back to 1988 and are the product of city worker Armando Moreno, who was tasked with removing the kelp and seaweed from the beach. Moreno took it upon himself to creatively sculpt the mounds, which he then covered with sand and later sowed with ice plant. The whole project took several years to finish, and since then, city workers have helped maintain the dunes and Moreno’s vision. Today, the first word is very easy to see from the air, while the second, just a little farther north, is much fainter. Still, we vote this the coolest use of sand and ice plant ever.

Walk across a musical bridge

The tune "Crab Carillon" by Joseph Waters can sometimes be heard over the roar of Highway 94 from the bridge on 25th Street. The railing that separates the sidewalk from traffic hides 488 chimes—a 2003 public art piece made by Roman de Salvo. People walking by can strike them in sequence to create music.

Throw an ocean-view party for $10

Hotel pools aren’t relegated to tourists. You can channel vacation vibes from The Inn at Sunset Cliffs with their $10-per-person day pass, which lets you (and up to three other friends in your group) splay out by their ocean-view pool, bring your own food (and booze!), and use their grill and fire pit. Call at least one day in advance to reserve your spot; the Inn allows up to 10 non-overnight pool guests per day from 10 a.m. to 10 p.m. And don’t forget the sunscreen!

Tunnel through a gold mine

Step back in time for a tour of a historic Julian gold mine from the 1870s. Eagle Mining Co. guides visitors through 1,000 feet of hard rock tunnels, complete with a look at historic milling and extraction techniques. Adult admission is still $10 (cash only!), just like it was back in 1968, when Ed and Ellen Sprague opened the property to the public. Being a gold digger isn’t so bad after all.

Aviators rejoice at this Queen Anne–style Victorian cottage, home to Kelly McGillis’s character in the hit movie Top Gun. Maintained by the Oceanside Historical Society, the property sits on an empty oceanfront lot next to Hello Betty Fish House, where you can order the off-menu Maverick’s Squeeze cocktail with Hangar 1 Vodka. Thirty years after the movie’s release, we still haven’t lost that lovin’ feeling.

The littlest Padres fans now have their own suite to chill in. The terrace level’s Nursing Lounge, launched in partnership with Sharp Mary Birch Hospital for Women & Newborns, offers moms a comfortable place to breast-feed in private, while still catching all the on-field action. And for fur babies: The new Barkyard at Petco Park, a set of six semiprivate suites in left-center field, accommodates four people and two dogs and comes complete with easy-to-clean artificial turf, a complimentary homemade treat for canine fans, and an in-seat menu for their human friends.

These majestic mountains of salt lie along the Chula Vista shoreline, and are part of San Diego’s second-oldest commercial business. South Bay Salt Works, formerly known as La Punta Salt Works and later Western Salt Company, was founded in 1871. (San Diego’s oldest business, the Union newspaper, started three years earlier.) The company’s buildings and rusty conveyor belts remain unchanged by time, and stand as a visible reminder of the Industrial Revolution. They’re also eligible for the U.S. National Register of Historic Places. The mounds, extracted from nearby salt ponds, can stack upward of 40 feet high and are visible from the Bayshore Bikeway.

Discover farming in an urban setting

Looking for backyard chickens, and free classes on how to raise them? A sack of "worm poop"? Or a chance to see Georgette, the Shetland-Welsh pony? Find them all at City Farmers Nursery, a working farm inspiring garden lovers since 1972 that also offers live music, brunch, and cold beer next door at Nate’s Garden Grill.

Nestled across from the Museum of Man is the tiny St. Francis Chapel, a Spanish Colonial church designed for the Panama–California Exposition in 1915. Available for weddings and other special ceremonies, the chapel seats 88 people on the main floor and 12 in the balcony, and is noted for its striking gold leaf altar.

Hike a hidden trail in Cuyamaca

The traditional path to the top of San Diego’s second-highest peak is up a steep fire road, where climbers are rewarded with sweeping vistas of Mexico, the desert, the Pacific Ocean, and the rest of San Diego County. No need to wait until the end of the climb to be enchanted, though. Skip the crowds and the asphalt by taking the Azalea Glen Trail, which weaves through sections of the forest undamaged by the 2003 fire, past Stonewall Peak, through open grasslands, and up a moderate boulder scramble, where you’ll be deposited near the summit in the thick of a cedar forest.

Skate where the Derby Dolls practice

Driving through the East Village, you pass a lot of unassuming old warehouses. One of these is home to the practice facility of the Derby Dolls, San Diego’s first modern roller derby league, whose season runs now through the end of the year. They offer Open Skate two days a week, and anyone is welcome to skate the flat track, banked track, or new halfpipe. Gear is available on loan.

Get buffed in the buff

You won’t find Roman baths in San Diego, but there is a Korean day spa, or jijimbang, where going au naturel in front of complete strangers is de rigueur. At Aqua Day Spa, a full treatment, which includes a vigorous body scrub, oil massage, and milk bath, costs only $75 per visit.

Try a "higher" level of yoga

You can do yoga just about anywhere in San Diego these days. A studio with locations in Hillcrest and Mission Valley is offering what they call—ahem—Herbally Enhanced Yoga. If that’s your thing, you must be a card-carrying California medical marijuana patient to participate, and it’s strictly BYO. Otherwise, you can take non-enhanced vinyasa classes throughout the week, which can be reserved through ClassPass. The studio location is only disclosed once you reserve a mat, so follow them on Instagram

Beneath Carlsbad’s The Land & Water Co. is The Charles Kenneth, an underground craft cocktail lounge. Upon entering the nondescript door adjacent to a dumpster—you’ll need a password, which changes daily and is revealed via Instagram (@thecaptaincharleskenneth)—a staffer can give you a mini history lesson on the recently remodeled space, which once housed a bar during the Prohibition era. It’s outfitted with furniture from the 1920s and comes with rules, including no hats and no flash photography. Adhere to rule number one, "keep your mind open to creativity and passion," by ordering the Bartender’s Choice, a cocktail tailored to your likes and dislikes. For more local speakeasies, click here.

Grocery shop in a beer bar

If your to-do list includes buying veggies and drinking beer, do both at the same time on Monday nights at Machete Beer House, a craft beer bar in a tiny National City strip mall, which has paired with Dickinson Farm for Market Monday. Buy produce and get 20 percent off your first pour.

Drink wine off the beaten path

Sure, you know about Temecula and Valle de Guadalupe when it comes to nearby wine regions. But the latest—and still off-the-radar—local area to get in on the craft of winemaking is along Highway 94 near Dulzura, which sits adjacent to Tecate and the Mexican border. These family-run, low-key wineries are ideal for smaller groups, offering personal tours, chats with the winemakers, and tastings in beautiful locations. Favorites include Dulzura Vineyard & Winery, Deerhorn Valley Vineyards, Granite Lion Cellars, and Casi Cielo Winery.

Holy gastronomy! With 24-hours notice, Bice ("BEE-chay") will create the inflatable cheese dish that’s filled with basil air and served with a prosciutto and caprese salad.

Over-21 privileges and under-21 fun come together in a rotating selection of slushie cocktails. Using the in-house slushie machine, the Den creates drinks like the Meister of None, a blend of aged rum, Jaegermeister, Dark Horse Coffee Roasters cold brew, molasses, and honey that’s topped with homemade whipped cream, cacao, and grated cinnamon.

Beef Wellington at The Red Door

The Wellington has shuttered (see page 44), but sister eatery The Red Door is paying tribute to the erstwhile steakhouse with "Wellington Wednesdays," when those in the know can order from a limited number of beef Wellingtons.

The emporium for all things sweet and decadent makes an off-menu vegan sundae with coconut and almond milk based vanilla ice cream, vegan chocolate fudge, and an almond-hazelnut praline plus vegan chocolate shards.

There are plenty of shared-plate options at Brian Malarkey’s new mega-restaurant, but the off-menu Parker House Rolls are a must. The baked milk and honey rolls are brushed with chives, parsley, oregano, and rosemary, as well as honey butter and flaky sea salt.