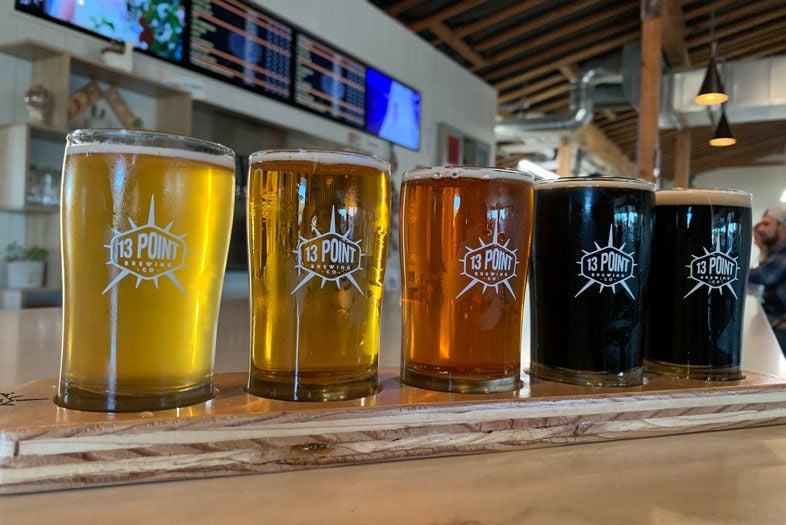 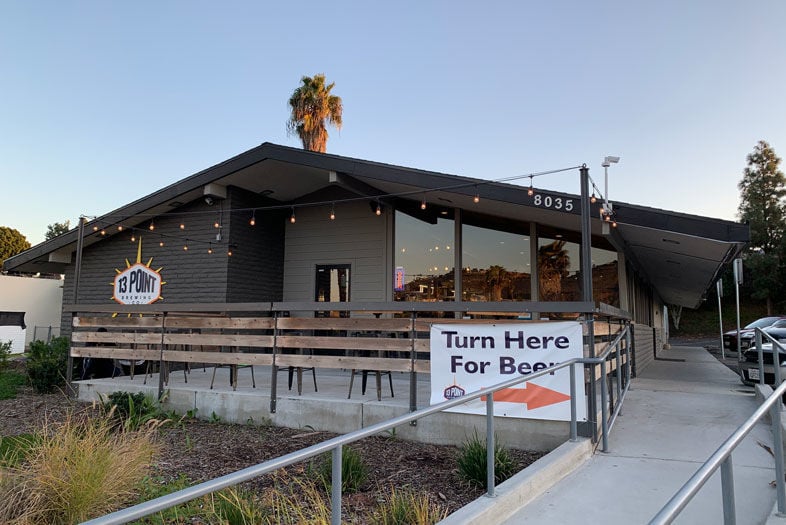 It's only been open in Lemon Grove for one year, but between head brewer Robert Bessone and recent brewer addition Samantha Olson, it’s clear a hefty amount of experience is pouring out of the taps at 13 Point Brewing Company.

Of the dozen draughts available, half are some variation of an India Pale Ale. (This ratio of IPA to "other" has been the case every time I’ve dropped by, so that seems to be the norm at 13 Point.) The rest of the options fluctuate between a 4.9% ABV Berliner weisse heaped with guava and passion fruit and a 6.8% ABV American stout with plenty of decadent dark chocolate notes and a surprisingly dry finish.

But even with such a hop-heavy selection, the IPAs themselves are fairly varied; one boasts rye for a spicy finish and another leans heavily on Nelson hops for an old school, West Coast-style flair. I’m partial to the Atlin, an 8% ABV iteration with a balanced blend of Columbus, Nelson, and Mosaic hops that finishes refreshingly clean.

Other stars include the Blue Lake brown ale, a 5.8% ABV take on the chronically under-brewed style. Only a handful of breweries like New English Brewing Company and AleSmith Brewing Company keep the somewhat passé brew on regular rotation, and it’s truly a shame. It’s the Goldilocks of beer: not too heavy, not too light, not too malty or bitter, and the middling alcohol content is just right. 13 Point’s is a tad roasty for the style, but it adds a complex richness I find most welcome.

On the lighter side, the 13 Penny Berliner weisse proves excellent; lots of fruit-forwardness tempered by a light tartness ideal for converting newbies and non-beer drinkers into craft beer disciples. Considering that 13 Point is currently the only brewery within Lemon Grove city limits, I’d wager a lot of the clientele falls into this category.

Despite the overall high quality coming out of 13 Point, Lemon Grove still doesn’t spring to mind when it comes to finding good beer in San Diego. Places like North Park, Miramar, East Village, and North County tend to dominate the local beer conversation due to both the sheer number of breweries as well as their dense populations of what’s considered "typical" craft beer fans (somewhat affluent white Millennials, mostly men, who still make up the bulk of craft beer consumers in the United States). While those regions have rightfully earned the attention, less saturated areas like South Bay and East County are quietly building a foundation for residents thirsty for local options as well as future fans just starting to look at exploring this whole craft beer craze.

This makes 13 Point more than just a brewery. They’re beer ambassadors, quietly working to provide good product to a community largely unfettered by expectation and experience in this realm. This isn’t ever going to be the place to chase crazily hazy IPAs or super-rare hype beers—there’s enough of that elsewhere. But by balancing the past’s ideals of brewing well-made, no-frills beers along with nurturing the future of beer demographics, 13 Point gets it just right.