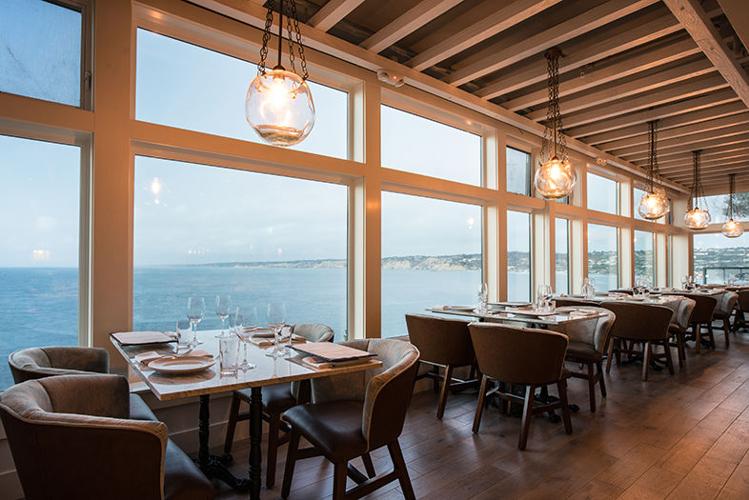 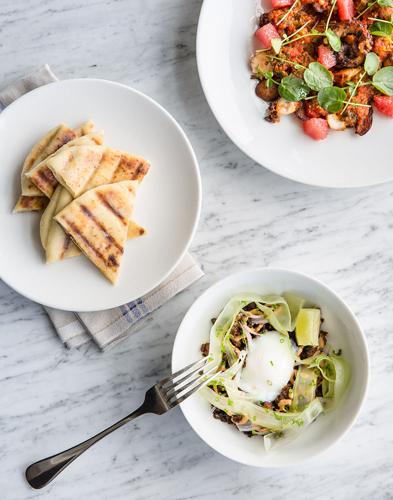 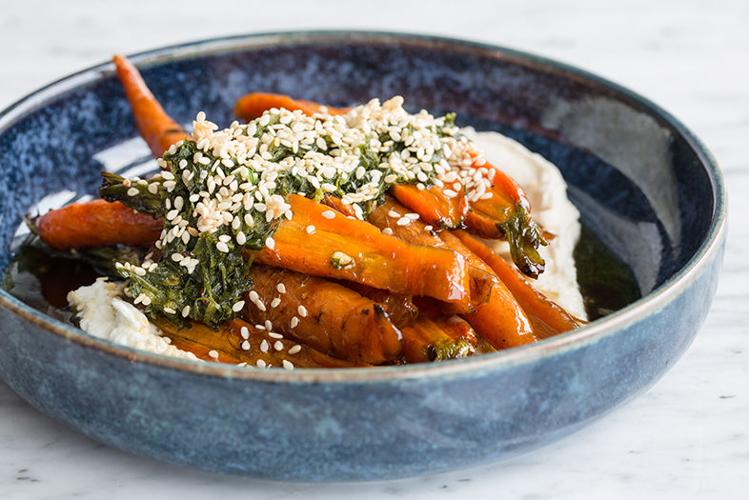 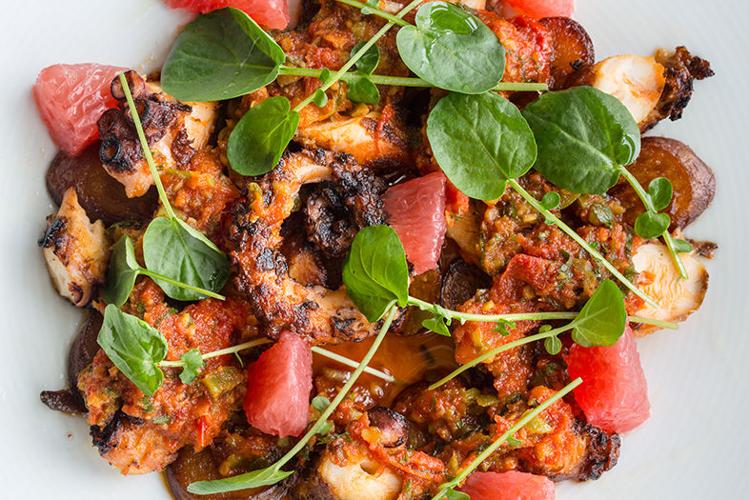 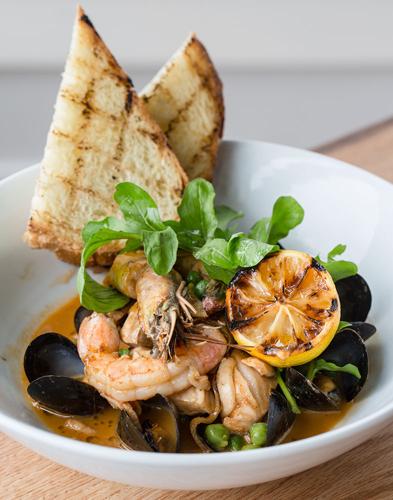 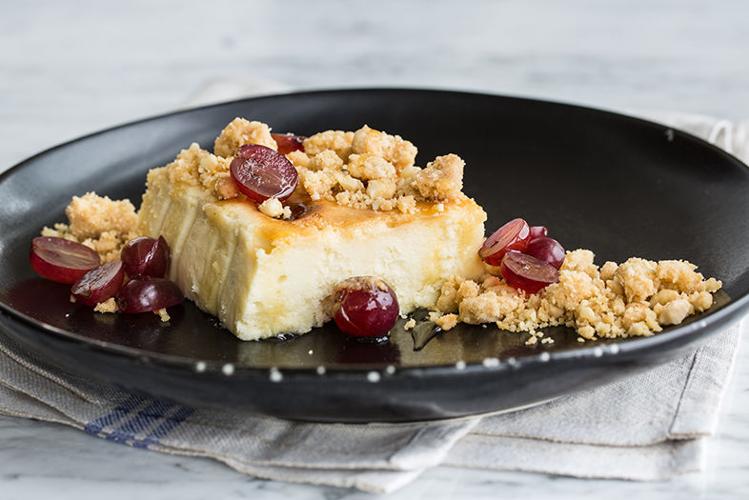 You have to play by the rules. Some rules are written. And some are intimated. If you have a barbecue joint, white tablecloths are a messy choice. If your restaurant clientele is mostly retirees, maybe skip the death-metal Pandora. And if you’ve got a restaurant on Prospect Street in La Jolla, you gotta have a view.

The Hake realized this last year. Actually, they probably realized it the moment they opened. But investing that kind of coin, even for one of Mexico City’s largest restaurant groups (Operadora Bajo de la Tintorera), was a bit hard to swallow on day one.

Now that The Hake has been a hit over three and a half years, they have invested—to the tune of $2.5 million. And oh, lord, what a transformation. The formerly cramped bistro’s square footage went from 3,500 to 5,400, and they added a private dining room with wine bottles acting as walls. Huge plate glass windows—60 feet or so across—look down on La Jolla Cove, the city’s majestic crag of cradled ocean. At sunset, we watch sea lions jump in and out of the waves and onto the rocks, hyperactively warming up for their nocturnal hunt. In lieu of a season pass to SeaWorld, you might just get a season pass to The Hake.

One thing about The Hake’s new view, however, is missing. Thank god. It’s the dirty not-so-secret of the La Jolla Cove restaurant view: the stench. Since we’re about to talk about food, I’ll refrain from calling it by name. But let’s just say the unappetizing scent is organic and locally sourced—mostly from seagulls and seals. And since The Hake is fully enclosed, you can enjoy the view without the jarring aroma of the wild.

In the appetizer section, Sanghavi does a few things exceptionally well, first and foremost the opah chorizo. It’s a shock that there’s no pork in the dish. With spices, she’s able to replicate the rich, spicy umami using opah—a great choice, since it’s a very neutral fish that can mimic meat—and then tops it with a poached egg and ribbons of celery for freshness. Her steam-roasted octopus is beyond tender, with Castelvetrano olives (the best olives by a long shot), half-fried potatoes, supremed sections of grapefruit, and a pepper sauce with chipotles and others.

Her lobster crudo would be a stunner, but the fresh, raw crustacean is buried under a mound of snap peas and nuts. A delicate fish needs breathing room, and the peas suffocate it, even though the dish’s crispy-fried sunchokes with quality olive oil would win over grumps. The wagyu tartare is respectable, if unremarkable. It needs more lemon, more onion, more zip—and as a fried herb, epazote flavor pales in comparison to, say, sage.

One of the greatest dishes in San Diego, not just The Hake, is served here as a side: those piloncillo roasted carrots with sesame seeds, carrot-top chimichurri, and goat cheese. These carrots make dreams. It’s a healthy dish turned unhealthily awesome, with the deep caramel of the piloncillo (a delicious Mexican brown sugar), tang of the cheese, and then the high vinegar pitch of the chimichurri. Order six or so.

You can see in a dish like this that Sanghavi knows how to make seafood taste intriguingly like land meat, and that’s an inspiring transformation. For more proof, try the tuna carnitas. Sounds like an awful idea, especially because the magic of carnitas comes from a slow braise. If you cook tuna that long, it turns into dry mush. But hers, while still a little tough, works so well. The "smoked hake," however, falls. It comes served in a hollowed-out bone. That suggests marrow, and it’s exactly what the hake (a deep-sea relative of cod) is tossed in, except ours is nothing but salt.

Getting back to ordering well, try the mussels with a guajillo broth. The only thing you need to do with mussels is make a good broth. The only thing. Mussels without a good broth are basically ugly clams without a cause. And Sanghavi’s broth is absolutely drinkable, redolent of chilies, garbanzo beans, and happiness. One of the best broths in town.

For the "catch of the day," Sanghavi serves an opah with an herb chutney (vinegar, herbs, various spices) that’s been in her family for decades. It’s a good chutney, although I might urge her to tweak it just a touch. It needs bigger flavors that we didn’t have decades ago—possibly nuts, ginger, sweet citrus, or a little more heat.

At most restaurants, I’d suggest skipping dessert. Dessert is a different beast, an entirely unique skill set. Cooking savory, you can pretty much throw anything at the pan and taste until it works out. Pastries and desserts, on the other hand, require exact measurements. Improv kills dessert.

But Sanghavi’s savory play on the cheesecake is inspired. It’s not a cheesecake in the way that Woody Allen knows it. It’s essentially a cheese plate molded into the form of an after-dinner sweet. Goat cheese and blue cheese are forced into a wedge, then laden with honey and grapes.

The servers are well aware of the need to preface this dish. "It’s NOT a sweet dessert," our server tells us. "It’s cheese." If you understand that, it’s one of the best cheese plates in San Diego—savory, but perfectly, minutely sweet.

Enjoy every bite and then gaze out the plate glass windows at what San Diego could be. With that view, The Hake could be serving Hot Pockets and still get people through the door. Luckily, the food mostly lives up to the eye candy, and occasionally steals the show.