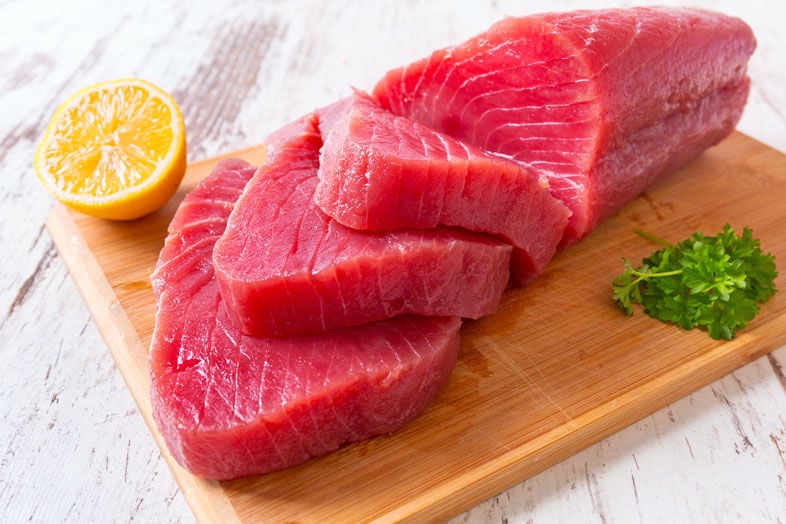 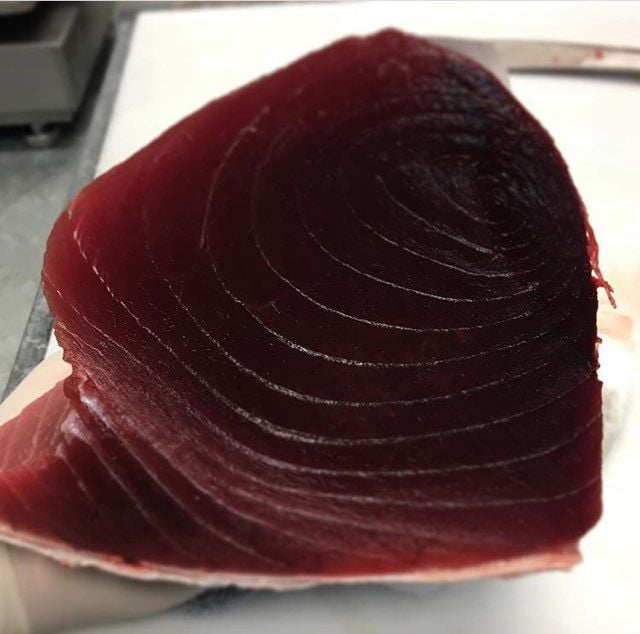 You know the tuna I’m talking about. It’s easy to mistake for a cube of watermelon. It’s the color of a Lyft logo. Appears to be glowing a vibrant, tantalizing purity. Tuna that bright red or pink means it’s…what, extremely fresh? Bursting with nutrients?

I thought this was widely known, but a chef recently told me very few of his staff members were aware of this, and almost none of his customers. So, especially with the recent proliferation of poke joints, I thought I’d be helpful with this PSA of sorts.

Bright red or pink tuna means it has been gassed. In its natural state, fresh tuna is dark red, almost maroon, sometimes even chocolatey looking.

Don’t worry, you most likely will have no ill effects from eating gassed tuna, according to the FDA. They have deemed carbon monoxided tuna as GRAS (Generally Regarded As Safe), though the practice is banned in Japan, Canada, and the EU. Plus, there is carbon monoxide in barbecue (given off by wood smoke).

But here’s why I personally tend to back away when I see bright red/pink tuna:

1. IT'S MUCH HARDER TO TELL IF IT'S FRESH OR NOT. It can be left out for days and it will not turn brown. In one study, the University of Florida found that carbon monoxided tuna kept its bright red color for 11 days in the fridge. "The carbon monoxide actually hides the quality of a fish," says fishmonger Tommy Gomes. "It’ll make a poor quality fish pretty like a rose. I’ve seen them take an old piece of brown tuna, put the gas on it, and it comes out looking like cherry lemonade." Tuna that’s been gassed also masks the smell (which is one way you can tell if tuna’s getting past its eat-by stage). "Since there’s no smell, it falsifies the freshness," Gomes explains.

2. I TRUST GOVERNMENT HEALTH ORGANIZATIONS, BUT ALSO RECOGNIZE THEY'RE NOT PERFECT. The 1992 USDA food pyramid suggested carbs should be the bulk of our diet (they corrected that in 2005 and 2011). The government approved the fat substitute Olestra, which gave people all sorts of tummy issues. Margarine and other trans fats were also approved, then banned in May 2019. There are some smart humans in the government, but even geniuses make mistakes. So I tend to go with my gut: tuna in its natural state, or tuna treated with carbon monoxide? Easy choice.

So why gas tuna at all? Because of us. Consumers don’t like brownish fish. Tuna oxidizes quickly. It’s difficult for tuna fishermen and women to get it to market quick enough before it turns brownish/chocolaty color. Customers erroneously think all brownish-looking fish is old or bad, and will pay more for "fresher looking" fish. So in the 1990s, the FDA allowed companies to gas the tuna and keep it artificially bright red for long stretches at a time.

"There’s nothing wrong with a hot chocolate looking tuna loin," says Gomes. "But here in America, we want that seared on the outside, rosy pink on the inside."

Gassed tuna is also often imported and less inexpensive than fresh, un-gassed tuna, says Gomes. "So, to be fair and honest," Gomes acknowledges, "for families on a budget gassed tuna is one of the best alternatives out there for frozen seafood."

In the New York Times article cited above, a sushi restaurant owner reported his sales of tuna tripled when he started using gassed tuna. So that’s obviously good for the small business owner, as well as grocery stores. Food waste is a massive epidemic—the U.S. throws out about half of edible seafood. If gassed tuna gets Americans to eat perfectly edible tuna they otherwise might throw out, that’s a step in a good direction.

But it’d be better if we as consumers knew that fresh, non-gassed tuna is supposed to be dark red or maroon—not bright red or watermelon pink, like a majority of the tuna I’ve seen at local poke shops. Ideally, we would look at a piece of bright red/pink tuna and think "Oh, hey there, carbon monoxide."

The most important things about buying tuna is to trust the source (whether grocery store, fishmonger, or sushi joint). It also should be shiny and somewhat translucent, and not have slime or an off-smell.