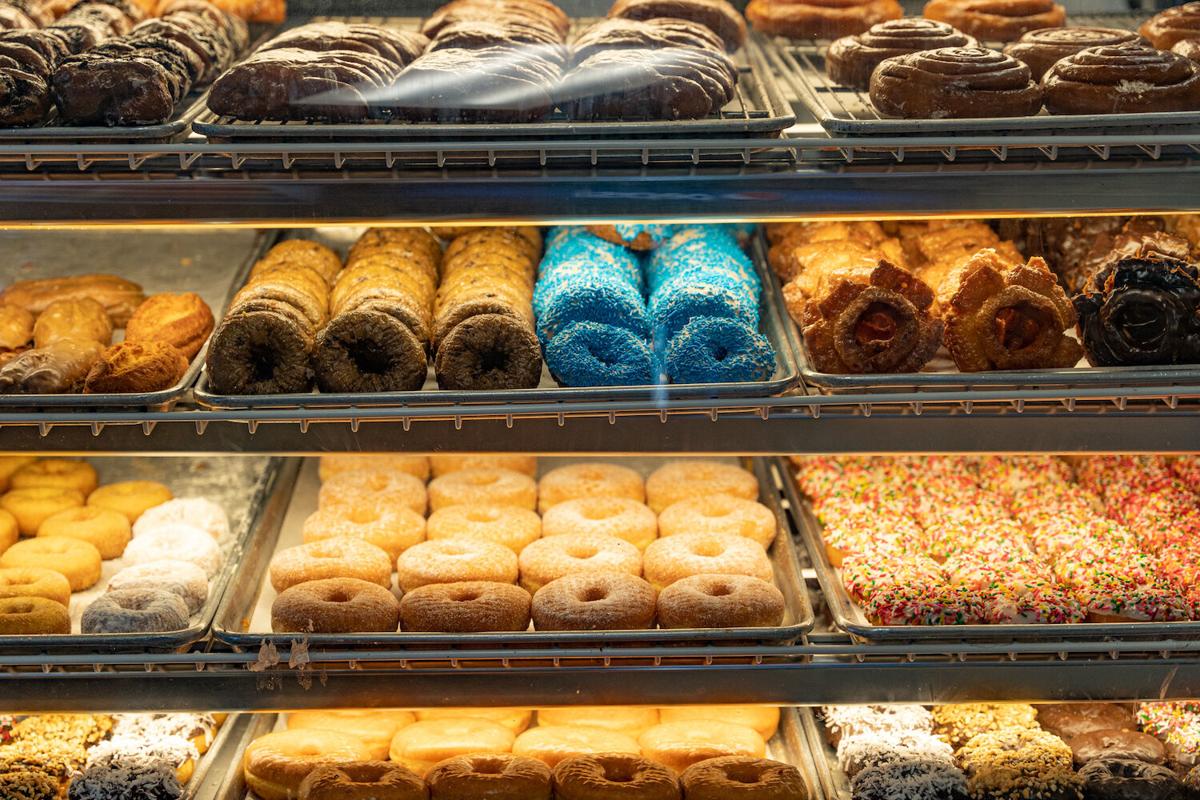 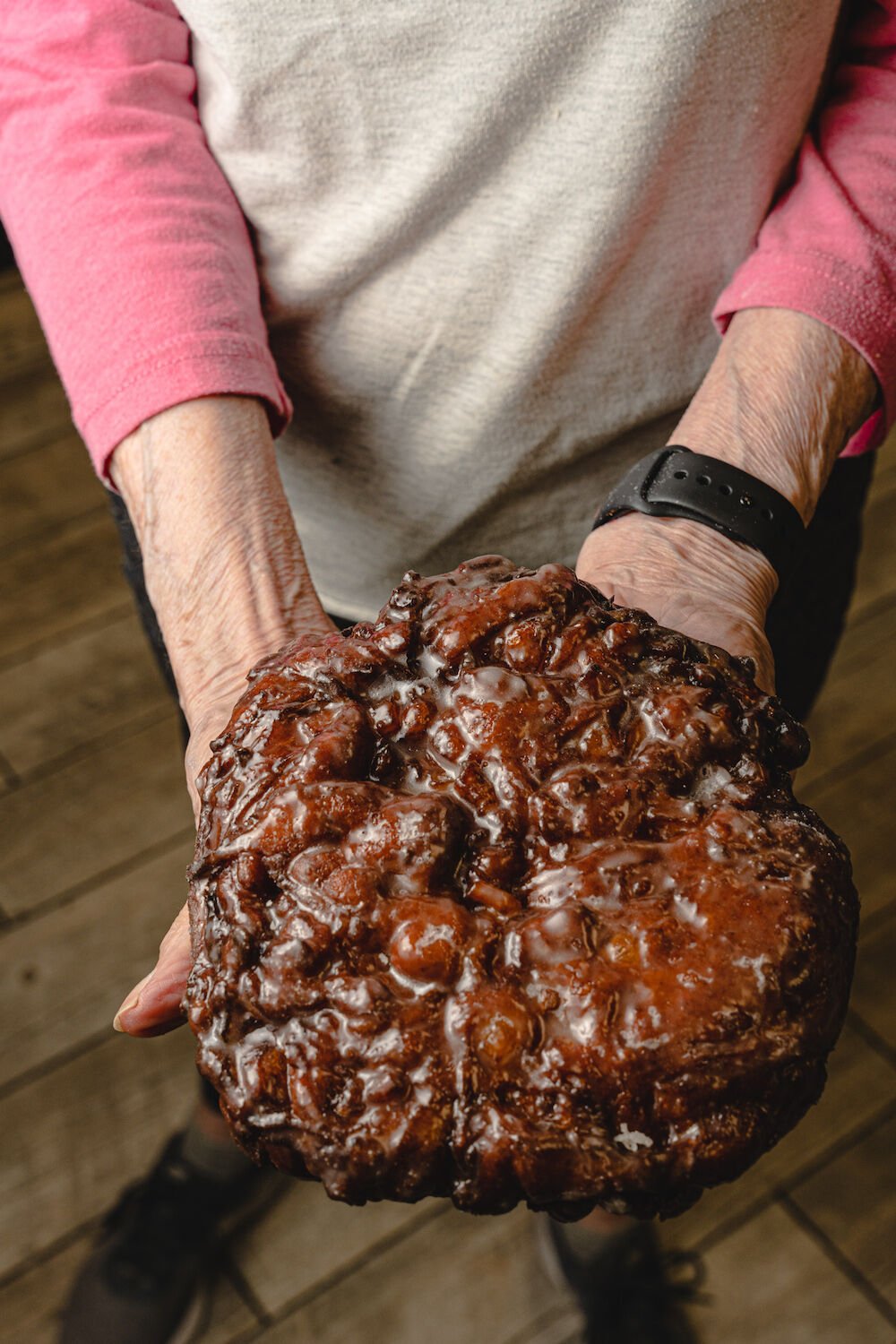 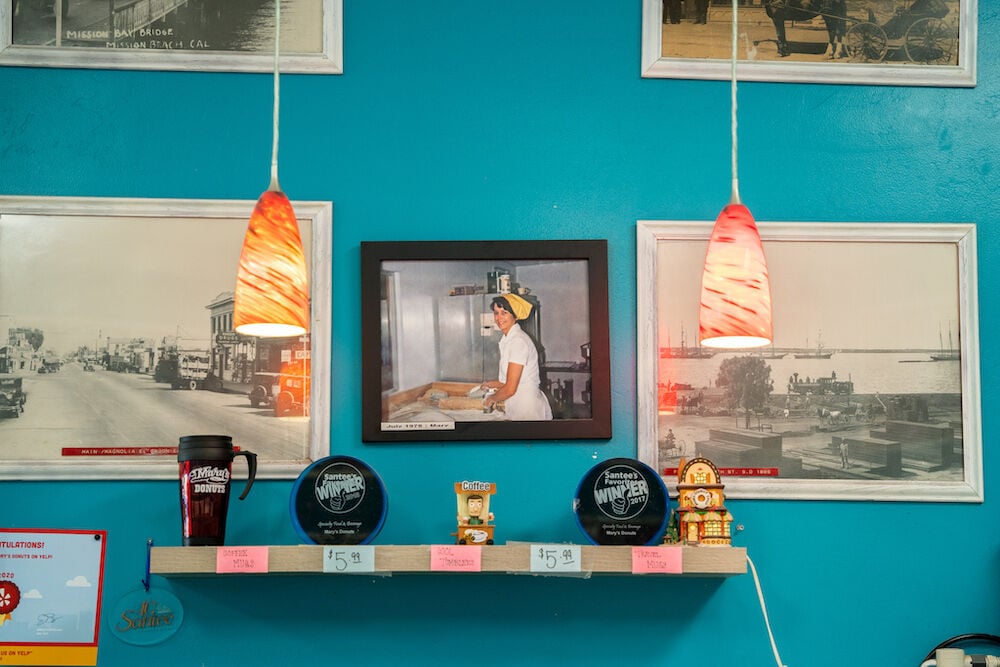 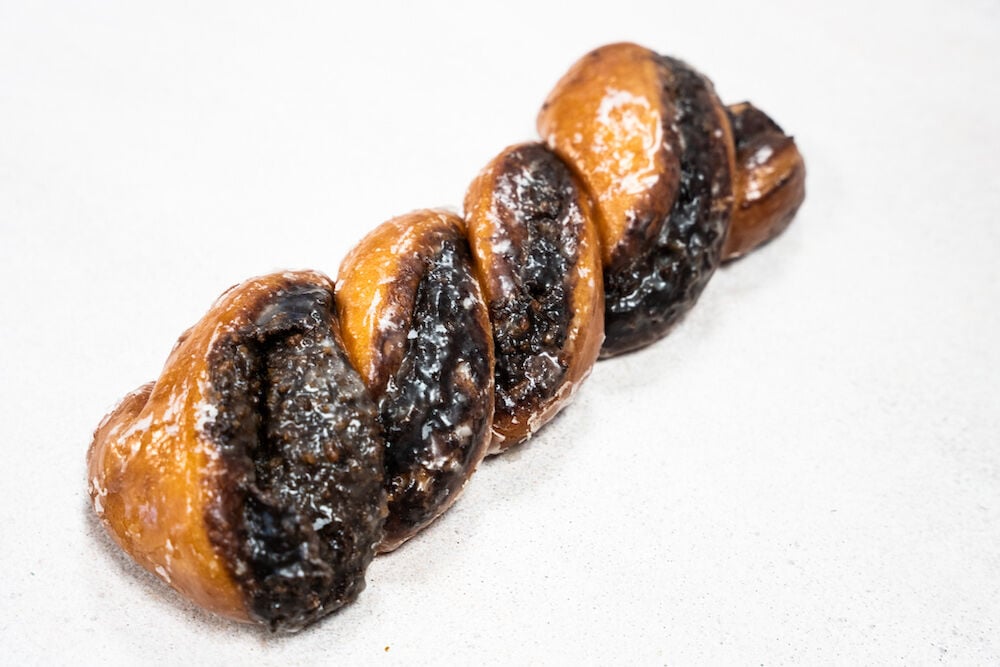 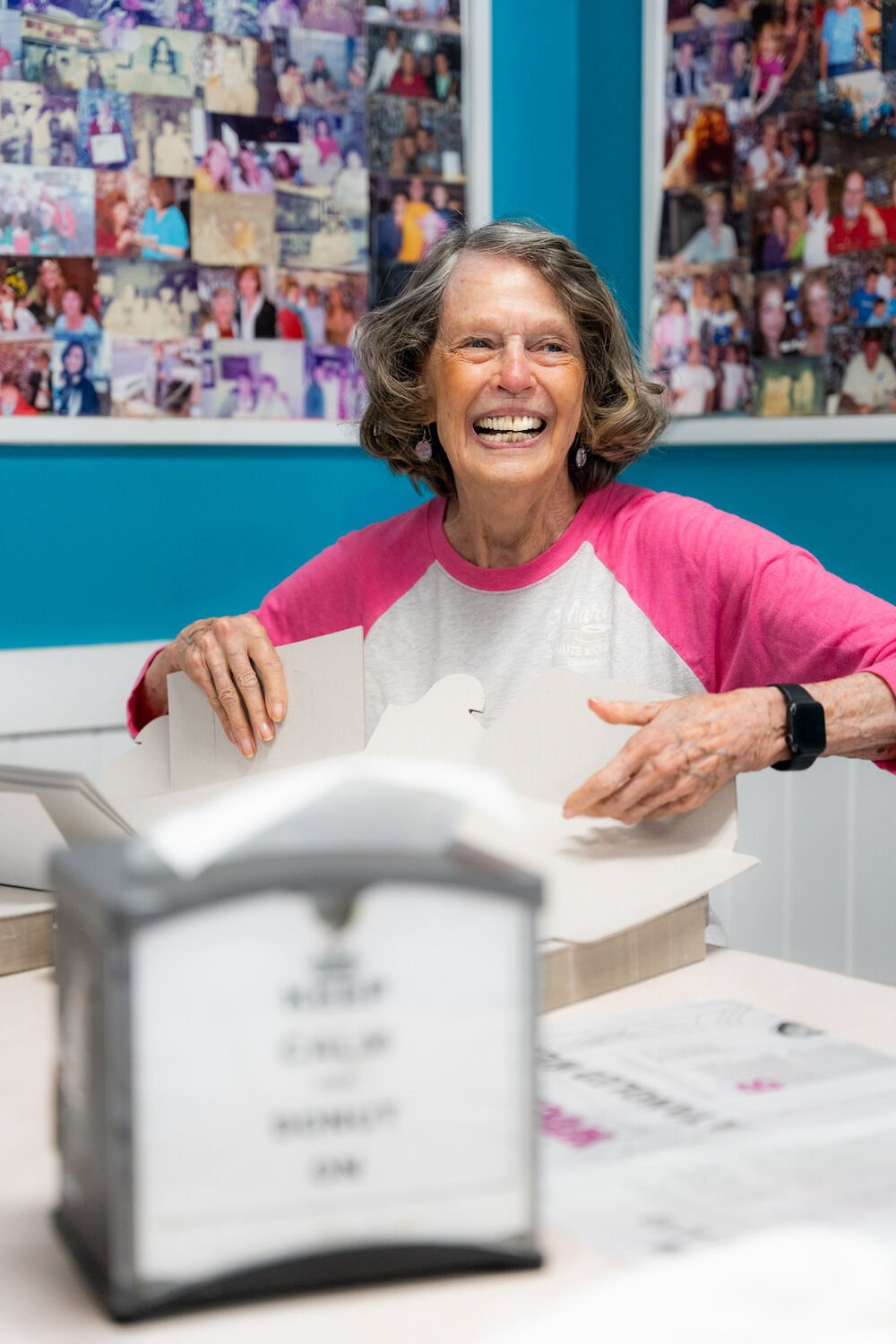 Mary is 90-something years old. I don’t ask, because sometimes what your mom taught you is more important than journalistic exactitude. When I walk into Mary’s Donuts in Santee, there she is, inspecting a tray of jelly-filled. Her vulpine blue eyes still pierce, her laugh is still girlishly crisp when she talks about that first year as a small-business owner (“My husband said, ‘I don’t know how to tell you this, but we’re not making any profit.’”), and her ability to lay judgment on the quality of an apple fritter by sight alone still governs.

“I can tell if it’s a good one just by looking at it,” she says of her famous fritters. “It’s gotta be flat. It must be crispy. You’ve got to have enough apples, but not too much or it gets greasy.”

Mary’s is the never-flickering porch light of this town. They are open 24/7/364, closing exactly once a year—from about 1 p.m. on Christmas Eve until they reopen 5 p.m. on Christmas Day. No matter how late, someone’s here.

They say nostalgia is especially triggered by smells, and the warm sugar in Mary’s air is loaded with it. So are the walls, lined with photos of her customers through the decades, each in various stages of fading. Some of the kids in those photos are now the adults who work in the shop.

To be near neighbors in a tensionless place, no matter how brief, is a crucial function of the American donut shop—especially for one like Mary’s, which has been around a couple generations, with a clientele into their years, people who’ve lost people. As we talk in the pool of shade outside her store, one by one her regulars say their salutations, recant an old story, toss out a memory (to one of which Mary chuckles, “Oh yes, I remember; he loved his corncob pipe and always had a flask in his pocket”). Each person seems to want more of her—that spark, her warm, dependable chat. I’m hoarding her time this morning, interrupting a ritual.

Mary lost her own husband in 2017. I ask her if the donut shop and these people helped her through that.

“The donut shop helps me through everything,” she says. “Twenty-four seven, it’s a place to be. There’s always somebody here. Other people look at it like this as well. They know they can come here any time and there’s always a little bit of light.”

She’s sitting with her granddaughter, Kelly, who moved here five years ago from Knoxville, Tennessee, and manages the shop.

“There are photos of me on the wall as a kid, working,” Kelly says. “When I was young I was like, ‘Oh, I would love to do that.’ But I figured by the time I was old enough, she’d be retired and it wouldn’t be possible. No one knew she’d be so amazing and still be doing this in her 90s. I saw all my friends fall into corporate jobs, and it wasn’t something that interested me. This does.”

Kelly represents the second generation of women in charge here—something that didn’t seem possible when Mary started. “When I wanted to buy my first shop, the owner wouldn’t sell to me because I was a woman,” Mary says. She convinced her husband to help her buy it (they were both franchisees of Winchell’s in San Diego). Though the wall of misogyny still stands in the US, it isn’t nearly the exclusionary force it once was. It’s taken some hits. Mary and her donut shop were one of those hits.

When you come here, you must get that fritter. You must try the Super-Twist, a mutantly large glazed twist donut that’s been split down the middle and loaded with rubbles of cinnamon and sugar.

But, Kelly says, “the whole point is the people—that’s why I do it. We know the regulars, we know everyone.”