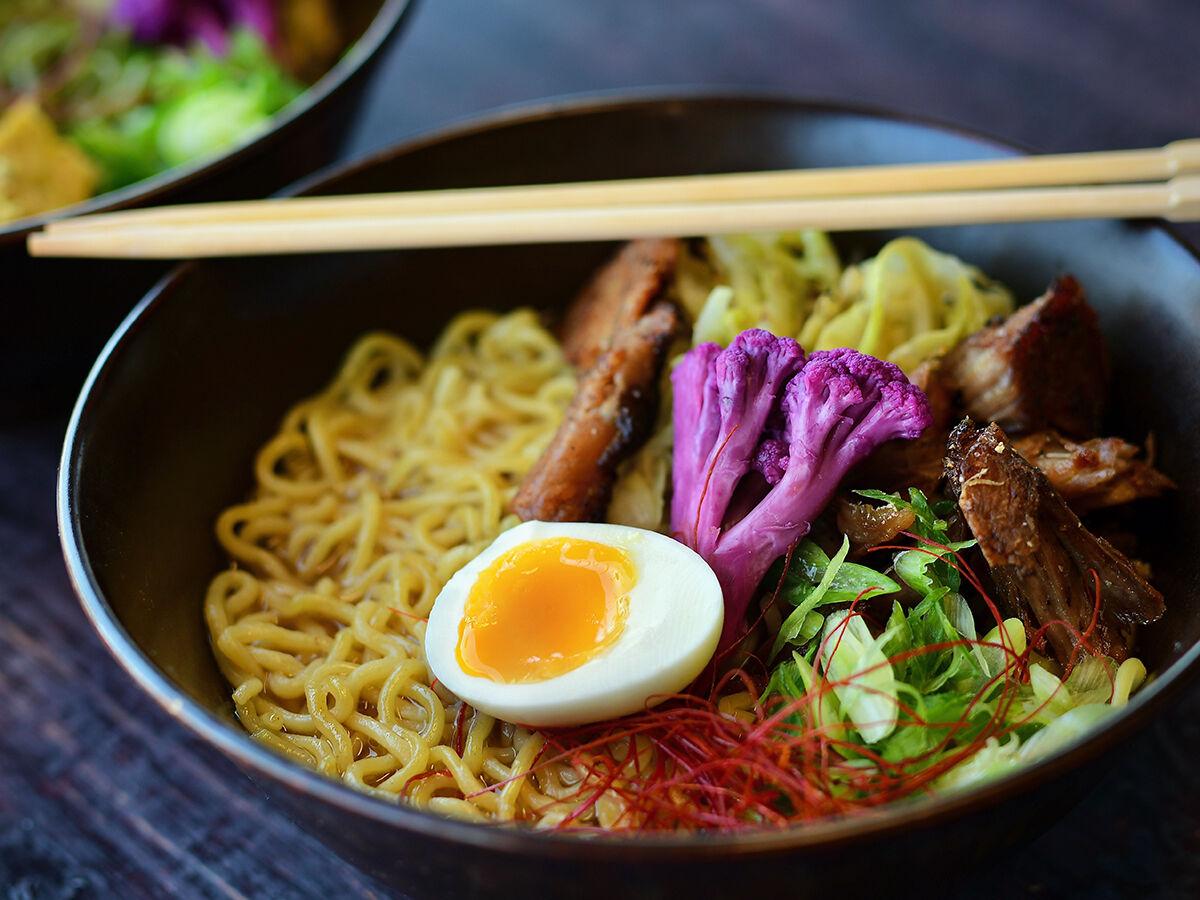 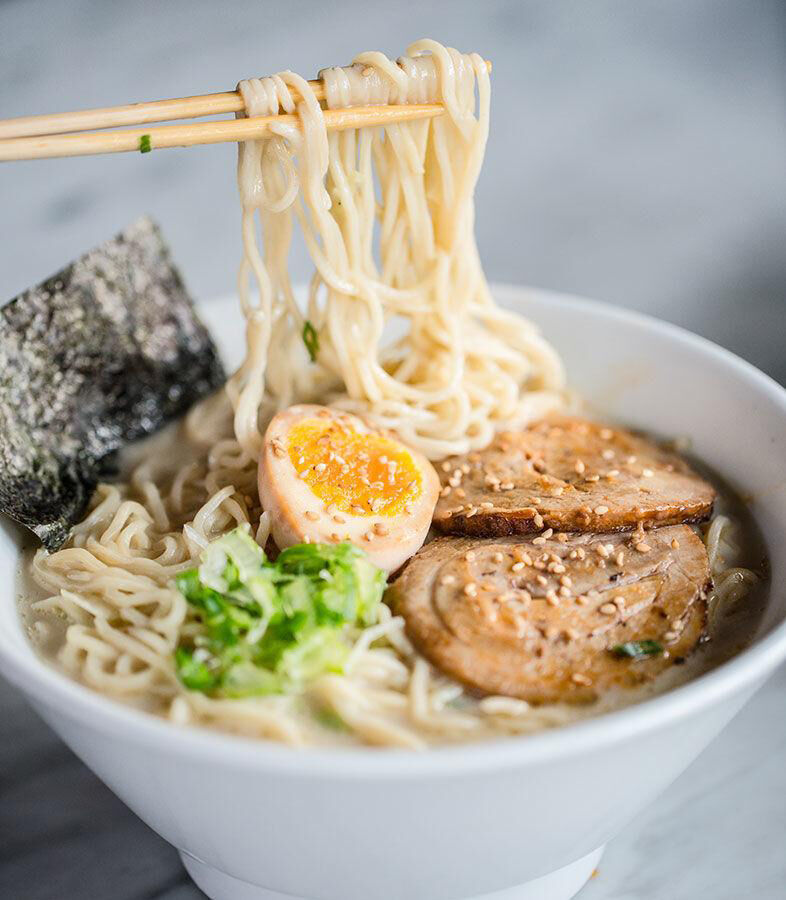 Well, ramen in the US is no longer a shelf-stable MRE for latchkey kids. We are living in the golden age of Japan’s greatest gift to humankind. (I personally believe the country has given us far more impactful gifts, but in a landmark survey the Japanese citizens themselves effectively said, “Nope, this is our greatest invention,” and I am merely respecting their judgment, which is also marvelous.) Real chefs are handcrafting perfect ramen eggs, roasting high-end pork chashu, analyzing the acidity of the city’s tap water to make sure their noodles are divine.

I spent the last month traveling to 18 craft ramen shops. Last night, on the final leg of my journey, I started in a strip mall in Vista, briefly considered getting a foot massage at the salon next door, then slurped my way down the coast one bowl at a time until my final stop in East Village. My CRV smells delicious. I am one part man, more parts salt.

I did this for love and for you. Because the temps have hit the fearsome mid-60s, which is when San Diegans start Googling “frostbite.” It is neck-beard season and it is ramen season.

A quick note about the process: I started with my own list of places I’d been to in the past. Then I researched. I queried Japanese friends, and friends I knew to have serious ramen addictions. I got feedback from San Diego Magazine readers. I made a list of 18 shops. At every place I tried their base or signature models—tonkotsu, mostly. But there are wildly creative riffs on ramen at these places and I urge you to try them all. What I've done below is list the ten that I would recommend to friends who ask, including my top five that I've marked with three asterisks (***).

As always, I don’t have any inflated estimation of my own opinion. This is not “the only list you’ll ever need,” nor will it be printed in gold leaf. I’m just a guy who searches for food that blows my mind and I share it in hopes that you’ll experience that same concussive joy. The number-one question I get as a food writer is “Where is the best [enter food type] in San Diego?” And now I can answer them from a place of extensive, exhaustive firsthand knowledge when they ask about ramen.

On a personal note, these quests have rejuvenated my passion for food writing. Each quest in this series—whether birria or xiao long bao or veggie burgers or chicken wings or ramen—has taken me all over the city into primarily independent restaurants of different cultures. Most of them aren’t trending on Instagram and don’t have a marketing budget to speak of. I don’t ignore bigger, established restaurants. That would be silly and exclusionist. But the headline grabbers aren’t the only kind of restaurant that makes our neighborhoods so compelling. These hunts lead me into the smaller places that compel.

Support your local ramen shop, and all restaurants, especially now. Make your own list. Thanks for reading, guys.

Kind of shocked by this one. Ajisen is basically the McDonald’s of ramen, in that they have over 700 locations worldwide. When you’re producing at that scale, quality often suffers. But their signature ramen is a meat-lovers’ bonanza with a deep, rich intensity of roasted and browned meats.

Owner Ayaka Ito is a certified master kikizakeshi (sake sommelier, essentially) and she’s working on launching her own line of sakes. (She allowed me to taste it, and it’s delicious, like pears in a glass.) BeShock’s a beautiful, modern addition to the East Village. I honestly expected ramen to be an afterthought to her massive sake collection, but her tonkotsu is so incredibly creamy and the pork practically melts when you look at it.

HiroNori is the work of Hiromichi Igarashi and Tadanori Akasako, whose first shop in Irvine had lines around the block. A friend helped them launch their second shop here in Hillcrest, and you can pretty immediately taste why those lines formed. Such a deeply flavorful, well-balanced bowl of soup. Try their shoyu (soy sauce) ramen as well, which is among the best I’ve found.

If you want to taste how simple and intoxicating the origins of craft ramen are, Hakata-style is what you want and Masa is your place. Chef-owner Masayoshi Tsuruta was one of the first sit-down restaurants in San Diego to serve it, and it holds up every single time. This is creamy, delicious elegance in a bowl.

Chef-owner Takashi Endo won the national ramen competition in Tokyo four years in a row. That’s how icons are made. A certified master. And right now, because of COVID-19, he’s actually in his two San Diego locations micromanaging the quality of the broth and noodles.

Santouka’s a chain from Japan, and it’s a good one. Ours is located inside the Mitsuwa Japanese market, and you can look at the display case of plastic replicas of all of their ramens before ordering. Their tonkotsu is perfectly balanced and creamy from the long-simmering bones.

Japanese-born Sam Morikizono never planned on serving ramen when he took over Tajima years ago. Restaurant ramen wasn’t really a thing here at that time. But a customer asked for it, it was a huge hit, and his little place became the de facto star of San Diego’s ramen scene. Their tonkotsu wins by not doing too much—just harmonizing the flavors—and their spicy sesame (tantanmen) ramen is one of my favorite winter lunches.

Consortium Holdings made fun of themselves when they launched this ramen concept, calling themselves out for not being Japanese. But they did it right, going to Japan to study the greats, analyzing the pH balance of their noodles. Doesn’t hurt that the restaurant group’s chef, Jason McLeod, has won two Michelin stars. Their Belly of the Beast is a wonder—tonkotsu broth, ramen egg, oxtail dumplings, beef brisket, and hoisin-glazed short ribs.

Have to be honest here. I’m an ardent fan of anything the husband-and-wife duo of Davin and Jessica Waite does (Wrench & Rodent, The Plot, life in general). But I’d long been lukewarm on The Whet Noodle until this trip. Oh, dear lord. Their Stone Soup is phenomenal. Tare is the soul of any ramen—a highly potent mixture that flavors the broth, essentially its “big bang” that dictates how the ramen will taste. And theirs is made of koji—a fermented rice that’s jammed with umami—then topped with a pile of delicious carnitas. It’s nowhere near traditional (their website tells you this ahead of time), and it is special.

The classic, the standby. While many other shops are adding all kinds of exotic ingredients and getting fancy, this yakitori restaurant keeps it bone simple with crinkly, thin noodles and grilled pork chashu. Their chashu is a star, which is no surprise because they’re known for their meats grilled over traditional Japanese binchotan coals.