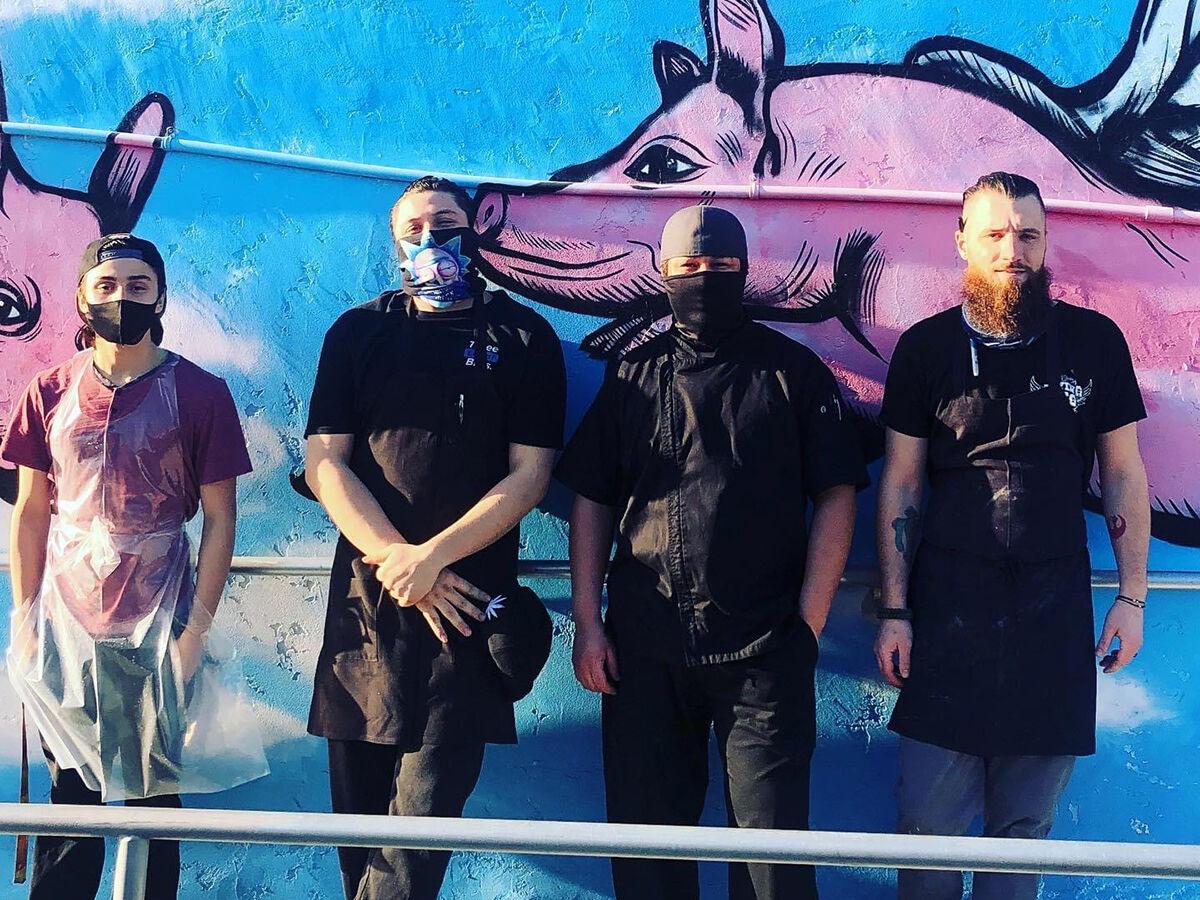 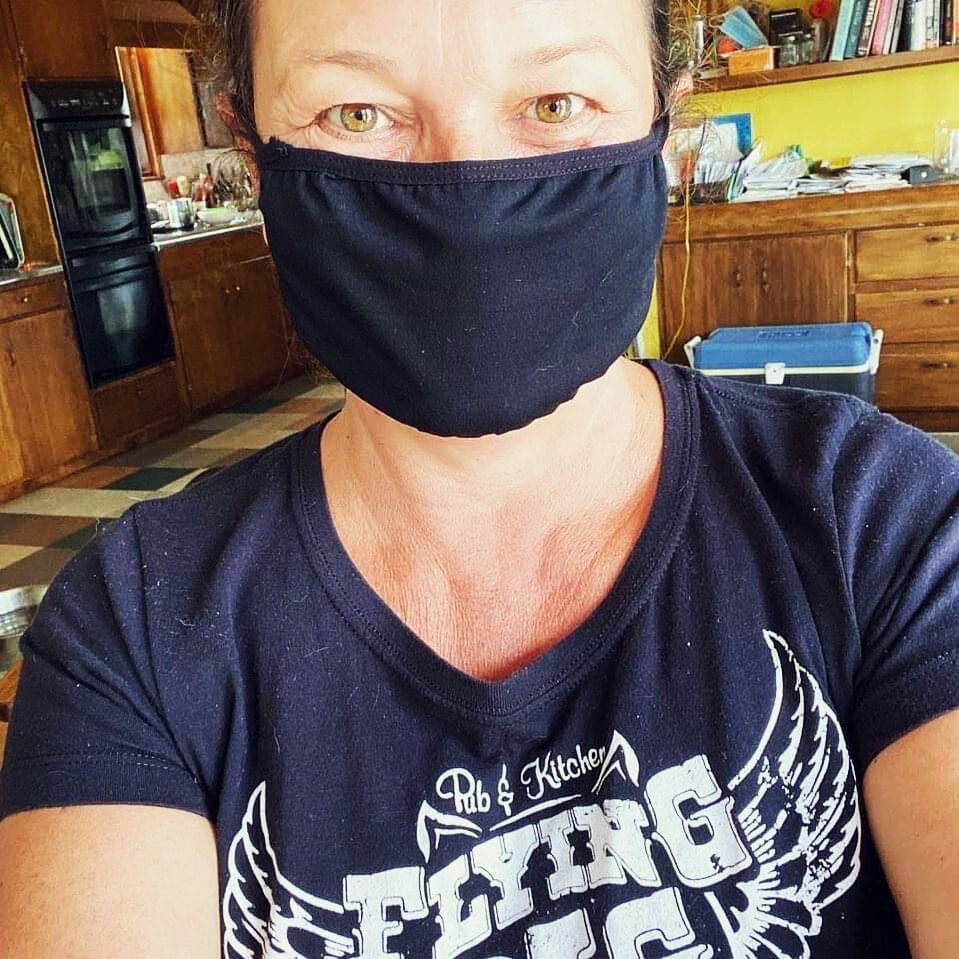 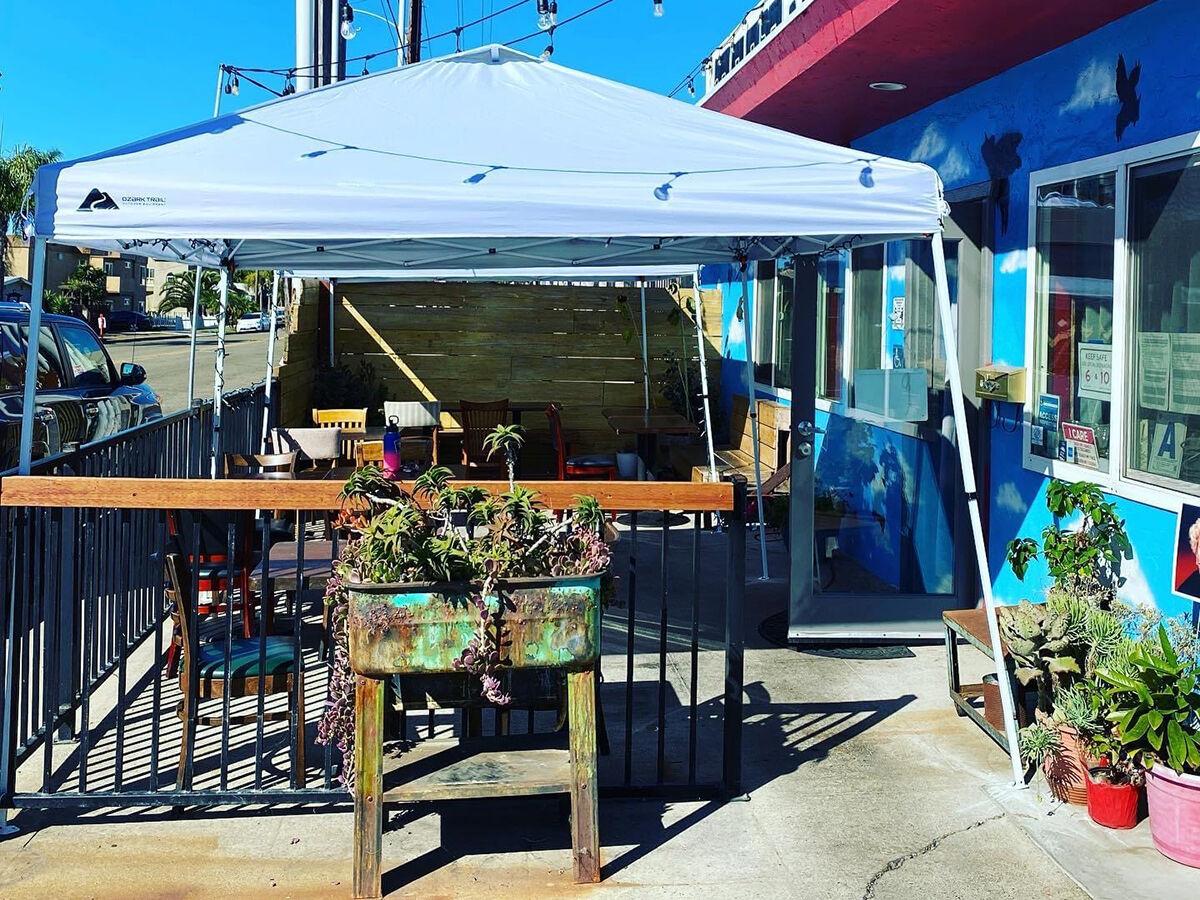 A few days back I got a text from Aaron Browning, who owns Flying Pig Pub & Kitchen in Oceanside with her husband, Roddy. It was a screenshot of a Facebook post. The poster praised the approximately 30 restaurants in North County who are refusing the statewide order to close outdoor dining for three weeks (possibly longer).

Not surprising. Many have been vocal about their opposition to shutting down local businesses. Pandemic life in Southern California is a delicate and increasingly wobbly balance between public health and economic survival, and the decibel level on both sides has risen.

This part, though, shocked Browning a little: “To those you [sic] that wilfully close and complain… you own it now.”

The person was blaming restaurant owners—like Aaron and Roddy—who are complying with the order, shaming them for not joining the protest.

“It’s crazy because it’s dividing us,” Browning explains. “We didn’t used to be divided in this. I got a message from another restaurant owner saying she’s getting so much pressure [from other restaurateurs].”

As if restaurants didn’t have it bad enough, now they’ve begun turning on one another. It’s the ultimate no-win situation. If an owner refuses to shut down, they face fines and legal ramifications and public shame. If they comply with the order, they’re seen as sheeple who are abandoning their fellow restaurant owners.

It’s deepening the economic divide, too. “The other day I drove by [a restaurant that’s complying with the order] and saw the owner sitting alone at the bar with his head in his hands,” she says. “Then I turned the corner and saw [a restaurant that’s defying the order] was jam-packed. I can’t tell you how many times I’ve cried this week.”

I called Browning and we talked through the impossible a bit:

Troy Johnson: What’s your take on the shutdown of outdoor dining?

Aaron Browning: I’m not way right, or way left. I guess I’m just old-school. They told us to do A, so we’re supposed to do A. For ten years, we’ve done everything that we’ve been told to do as business owners. Now we’re told to do it for safety reasons, so we’re going to do it. We may not agree 100 percent, but we do it.

The not-agreeing comes from a lack of evidence that outdoor dining causes the spread?

Exactly. There are no numbers about people getting sick from socially distanced outdoor dining. The best reason I’ve heard is someone who posted on Facebook that the shutdown has nothing to do with the business. It has to do with keeping people home. But if that’s the case, look at the big-box stores. There’s a line to get into Costco. I can go to Wal-Mart and stand indoors next to 30 people for ten minutes because they only have two checkers. That’s more dangerous than someone sitting in a parking lot at a picnic table. I’ve said from the beginning, I feel like everything they’ve thrown at us has been arbitrary. They have a fishbowl with a bunch of pieces of paper in it and they just pull something out and enforce it or ban it. But we’re not going to rock the boat. Do I think it’s kind of bullshit? Of course I do. But I do it.

And you’re getting pressure to defy the order?

The peer pressure is crazy. It’s a mob mentality: “If we all do it, they can’t possibly punish us all.” One of my really good regulars put this whole rant on Instagram and if any restaurants want his business, they won’t comply. You would not believe how many people send messages saying, “You guys need to just open and we’ll come eat—this is ridiculous!” My view is, “Well, okay, you guys are my regulars, why don’t you just come and get food to go?” I feel bad for all these restaurant owners who spent $10,000 to put up those tents and now they have to close. We sold $900 last night. Any businessperson would say, “Close your doors.” Do we want to use our life savings? No. But we will.

So you’re getting it from every direction.

Every direction. The people who feel strongly call you sheeple if you close. One of my really good friends went to [a place that’s staying open] and his social media post had the tag #freedomlunch. I wasn’t mad. I was just, like, “Really?”

The peer pressure is crazy. It’s a mob mentality: ‘If we all do it, they can't possibly punish us all.’ Aaron Browning, owner of Flying Pig Pub & Kitchen

But others support you complying?

Yeah. I have a lot of regulars who are terrified. I have one who was picking up dinner and there were too many people picking up food at the same time—so her husband hid in the car. They like what we’re doing. We’re a husband-and-wife business. We can’t afford to piss people off. We can’t afford to lose any guests. My daughter’s teacher said she wouldn’t step foot in a restaurant that has decided to stay open.

How do you feel about the restaurants refusing to comply?

I mean, part of me is all for it. You do you, boo. But what happens if some 25-year-old goes home to their grandma and god forbid she dies and they trace it back to the restaurant? Everybody keeps saying, “Don’t judge the people who are staying open,” but I’m annoyed. You guys are going to ruin it for the rest of us who are following the rules. And why do you want to make such a big spectacle about it? Why go to all the news stations and do the social media? There are a lot of components I don’t think these restaurants are paying attention to. And who are these lawyers telling these people nothing bad is going to happen to them? That any fine they get will just be swept under the rug? I don’t know if that’s true. I would think that somebody from the [Department of Alcoholic Beverage Control] is going to get pissed off and makes examples of people. Now your $80,000 liquor license is gone; how is your business going to survive? We can’t afford to lose our liquor license.

What if you knew you’d have to close forever tomorrow? Would you open in protest?

No. We’d say fuck it and we’d close and hibernate until it’s over. Even now, we’ll have people order to go and ask if they can just sit on the patio and eat it. And we’ll say, “Well, no, you can’t.” There is a part of me that doesn’t want to see my business die. Part of me wants to say, “Yeah, you can sit in my parking lot.” But, no, I can’t.

So how are you adapting?

We’re making pickled onions and jars of pickled vegetables to sell as stocking stuffers. I made cookies for the first time in 47 years last night and I was like, “Hey, maybe we can sell these!” Roddy said, “Honey, how much money do you think we’re gonna get for a damn cookie?” At the end of the day, it is what it is. If I gotta become a real estate agent, then that’s what I do. In the meantime, I’ll just pickle some shallots for your stocking. It’s down to “How much profit can I get out of this onion?”

And while you’re launching a pickled vegetable stocking stuffer side hustle, the ones defying the order are making money.

I know [a restaurant here in Oceanside that’s defying the order] is up in sales 30 percent compared to pre-COVID. People say they’re doing it for their staff—but at that point, are you really?

In light of the rift between the protesting restaurants and those that are complying—are we still at the point where this has brought the community together?

Yeah. It’s wild how we’ve come together to keep these businesses alive. These small businesses are still open because people are being good and buying trinkets from the local trinket store. It’s also crazy how innovative we’ve all become. Look at Campfire. Their food is not designed to go into a box. So in order to stay open they became a barbecue joint where people walk up and get their brisket to go. They completely changed their concept. Nine months of this stuff has really taught us how to change and adapt and do more with less.