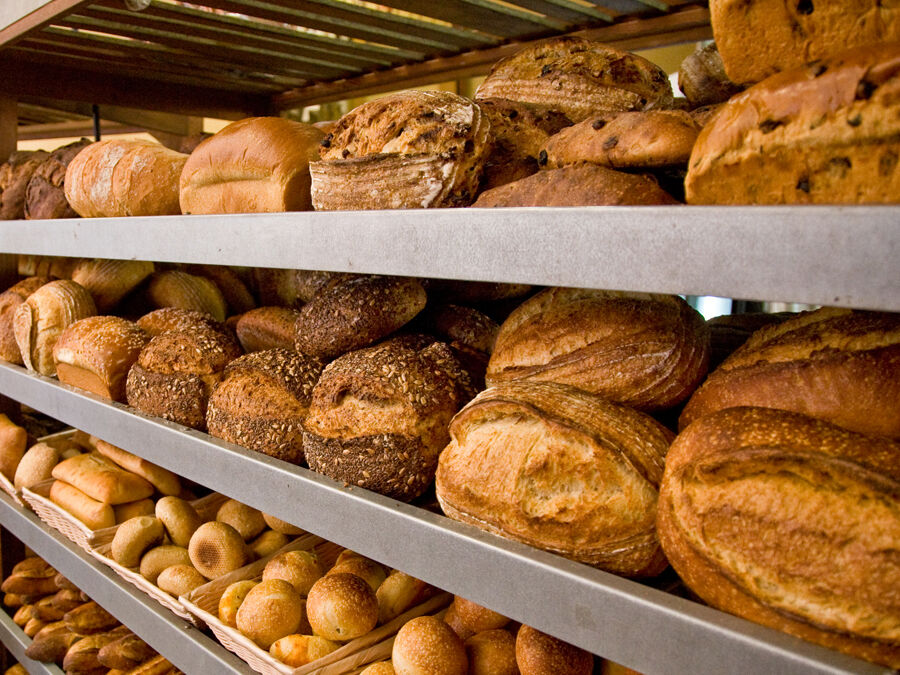 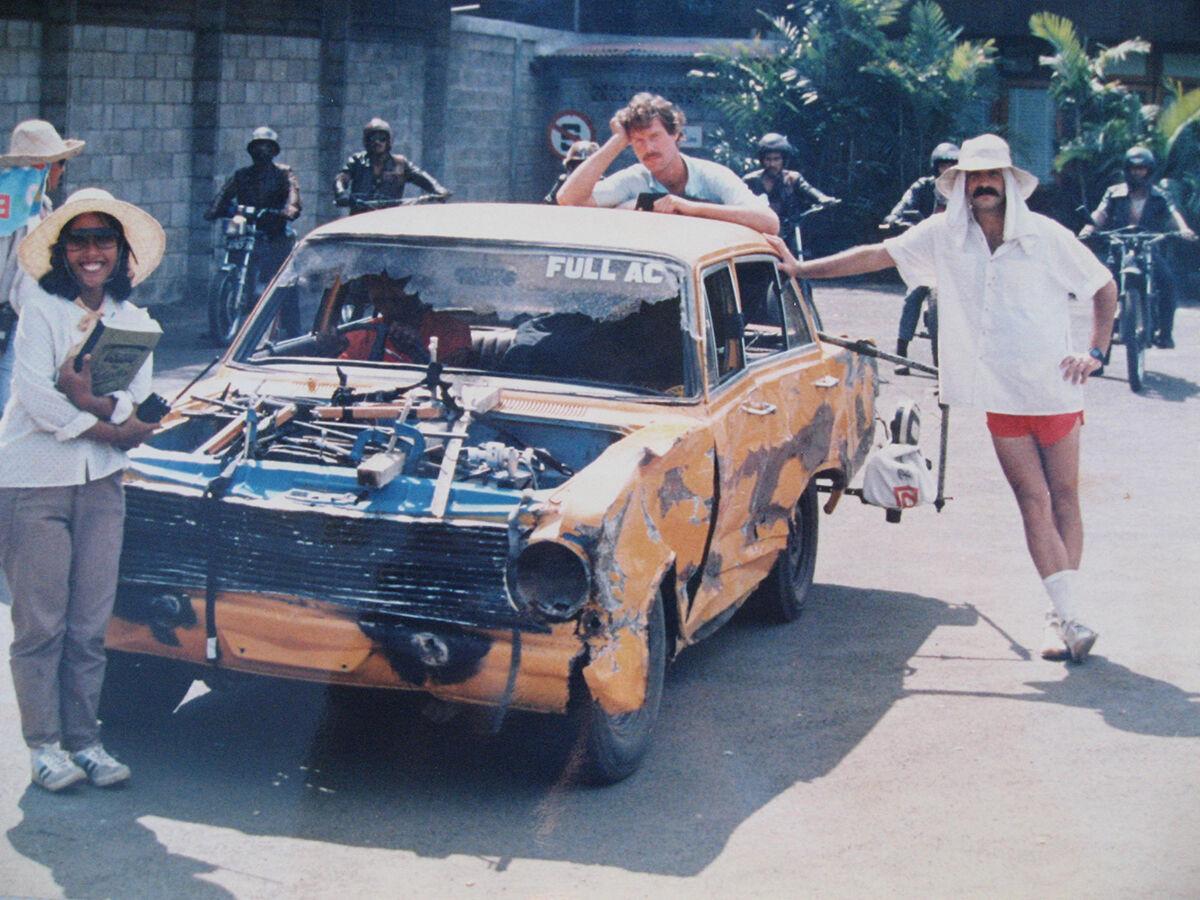 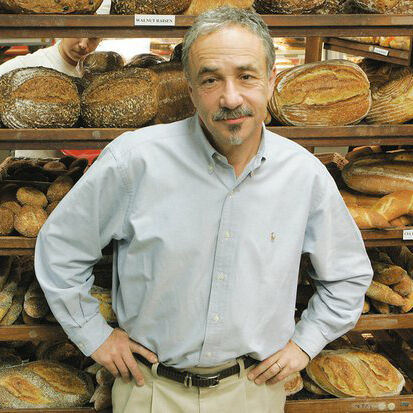 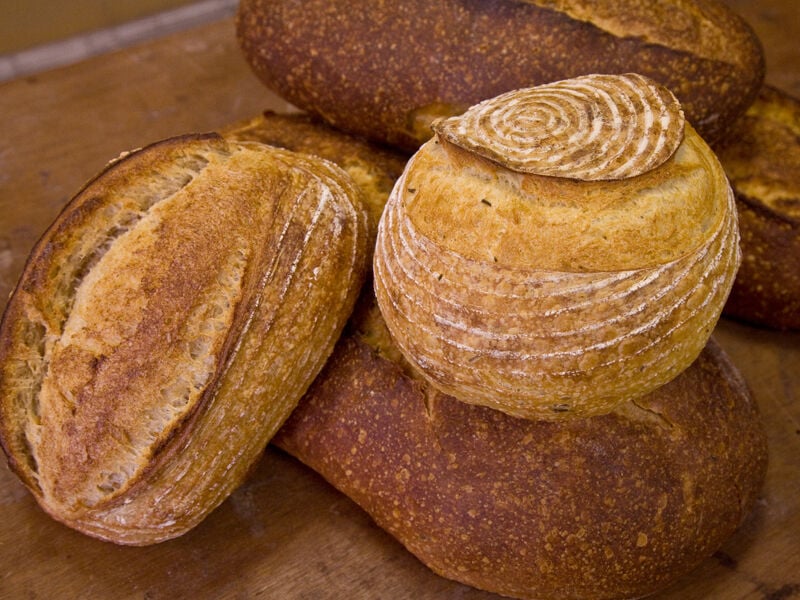 A Jewish kid in Manhattan who was told he had Celiac disease ended up building an empire made of bread. He also dreamt of being an actor, but his speech impediment got in the way, so he ended up writing jokes for Bob Hope. As one does. These days he’s known as the man who brought hard-crust European bread to San Diego—the first in the city when he opened Bread & Cie in 1994—but in 1980 Variety magazine knew him as the writer and director of Mother’s Day, one of the most iconic B-movie horror films of all time. I just watched the trailer on YouTube and I feel the need to perform an exorcism while I shower. Oh, and his brother Lloyd had a bit part in Rocky and is the cofounder of Troma Entertainment which put out such seminal classics as The Toxic Avenger and Surf Nazis Must Die.

Charles Kaufman has lived a life.

“You live in Manhattan as a Jewish guy, you have to eat,” he says. “My grandmother baked, so I was surrounded by bread. My mom didn’t work, but she had a great knack for finding local food places. There were these Italian bakeries around us, and Jewish bakeries, and I’d go with my mom. I’d sneak around into the baking area. She’d have to come pull me out.”

It was a foreshadowing of his future, but he didn’t know it at the time. He wanted to be an actor. Plus, he couldn’t even eat the bread, so he just stared at it longingly.

“I was a Celiac kid, or at least we think. It was questionable, because at age 16 I somehow grew out of it,” he says. “But I would go to birthday parties and everyone else would have cake and I would have a pack of cottage cheese and bananas.”

His mom worked on set crews for theater productions in NYC. Young Charles auditioned, “and I stunk,” he says. “I was so unaware that I didn’t realize in order to act you had to be able to speak. As I’m sure you’ve noticed I’ve got a speech impediment, and it comes out stronger when I talk about my mother and bananas.”

So Charles decided to get into the production side of the film industry, moving to LA and attending UCLA film school. His first job was as a production assistant for iconic comedian Bob Hope. “Bob didn’t trust the telephone, so he wouldn’t call people who wrote for him,” Kaufman explains. “So he’d give me a list of topics for his writers and send me in a car to deliver them to the guys. The next day, I’d have to drive back and collect the gags they wrote, then deliver them to Bob. I was stuck in traffic so much that I started to write gags myself.”

Hope used some of Kaufman’s jokes. He introduced him to Dean Martin and Jimmy Durante. He’d take Kaufman with him around town, and “eventually we’d run into somebody who’d bring up a topic and he’d look at me and say ‘joke joke joke’ and I’d have to come up with ’em on the spot. My gags weren’t that good and he still didn’t know my name, but he was an amazing guy.”

Like I said, I found the trailer for his cult classic, Mother’s Day, on YouTube. It is all kinds of disturbing. Just watching those few minutes made me question the existence of God. But you can see why it did well by the comments:

“This film is [...] indeed one of the greatest cult horror classics ever made, if not one of the best horror/thriller/grindhouse films from the 80's in general,” user Leeccdoo writes.

“This movie is a cult classic. Almost up there with Carrie.”

“One of the most f'd up movies ever made.”

“This looks absolutely disgusting. I couldn't even finish watching the trailer.”

I ask Kaufman why it did so well. “I think it’s because it was one of the first comedic horror films,” he says. “I think it’s funny, or at least it was meant to be funny. It was basically a slasher film, but we went beyond what other films were willing to do. There were axes in crotches and TVs smashed over people’s heads.”

The movie was remade in 2010 by Twisted Pictures (the demented filmmakers behind the Saw franchise), starring Rebecca De Mornay, Jaime King, and Shawn Ashmore.

Kaufman made films all the way up to 1990 until a few things forced him out of the biz. For a long while, big production companies like Fox and Warner wouldn’t make films like Mother’s Day. “They were above it,” he says. But then they decided they weren’t above it anymore. Also, he explains, “It used to be against the law to both distribute films and own theaters. I used to be able to sell my movies directly to the theaters. Then the law changed and Fox and Warner bought the theaters and monopolized it, pushed us little guys out.”

Kaufman needed a new plan. He found it in France.

“I used to go to Cannes to show my terrible films,” he says. “That’s where everyone went to sell their films. You’d watch new films all day. But if a film stunk, I’d sneak out and go down to a bakery and work with a guy and learn how to make bread.”

Back in LA, famed baker Nancy Silverton was just starting La Brea Bakery. Kaufman knew her, and she helped him understand the breadmaking business.

“I’d been coming to San Diego for a while, and I found this place in Hillcrest and just took a flyer,” says Kaufman. He poured his B-movie money into opening San Diego’s first bakery with hard-crust European bread. It was not an instant success.

“People didn’t know what the hell to make of it,” he remembers. “They thought it was old bread because the crust was hard. I would send people out with baskets because I knew if they just put a piece in their mouth they’d like it. We were serving levain and nobody knew what the hell that was. They thought it was a Volkswagen van. We had a bus stop in front of our café, and I’d give a loaf to the driver and go up and down the aisles handing out free bread. My grandmother used to make bread and she’d say, ‘If your mouth doesn’t bleed, then it’s not a good piece of bread.’”

Two of Grandma’s recipes are still on Bread & Cie’s menu: the challah and the multigrain.

“My grandmother used to say, ‘If your mouth doesn’t bleed, then it’s not a good piece of bread.’”

This was before San Diego became a serious food town. Hillcrest, while having a thriving gay community that was crucial to Kaufman’s success, wasn’t yet the restaurant hub it would become. “It was a retirement town,” he remembers. “We were alone in that part of Hillcrest in 1992. You could hunt deer down there.”

I ask Kaufman if there were specific days he knew he’d made it, that Bread & Cie was here to stay.

“Two days I can think of,” he says. “I always wanted to be part of a community. I didn’t want to be in a mall. About two years into it, I was walking down the street and there was one of those station wagons that’s just jammed with the flotsam and jetsam of someone living in it—tennis rackets and shoes and newspapers. And in the back window was a Bread & Cie bag. I said, ‘I think we made it. We’re just part of the flotsam and jetsam of this community now.’

“The third time was after 9/11. All the other businesses in the hood were closed down, and our café was jammed. People were just in there talking. That was one of my proudest days, that they felt comfortable enough to come to Bread & Cie in the wake of a tragedy because it was part of their community.”

Kaufman says the keys to Bread & Cie’s success are all the usual things—good ingredients, not cutting corners, his partner Chris Jurca. But at least one of their advantages came from one of their worst days as a bakery. It was in the beginning, and they couldn’t get the bread to rise.

“We couldn’t figure out what the hell was going on and we thought we’d have to shut down,” he remembers. “We analyzed everything, including the protein in the flour. So finally I called a guy in New York and he said, ‘Let me send you some New York water.’ Sure enough, that was the problem. We’d installed a filter that had filtered out everything from the water and made it inert.”

So Kaufman had San Diego’s water analyzed and compared to New York’s water. He hired someone to create special filters that remove just the right elements from San Diego water and essentially re-create New York water.

“I was so dumb that I didn’t realize how hard something as simple as bread could be,” he says. “I’ve always pursued my passions without looking into what’s involved. If I knew then how hard it would be would I have done it? Probably not. I guess I’m lucky to have not had a clue.”

Kaufman: “It’s a three-starter process; we go from a mother to a starter and it takes about three and a half days total. It brings out the flavors of the flour. We’re actually one of the few folks who make the levain with some organic wheat because of the taste. If there’s a more expensive and excruciating way to make bread, we don’t know it.”

Kaufman: “The word scallion scares some folks away, but I think it’s our best bread. We toast the walnuts and it’s just a very interesting flavor.”

Kaufman: “It’s just a real dark sourdough rye with a German spin to it and we make it without the seeds.”