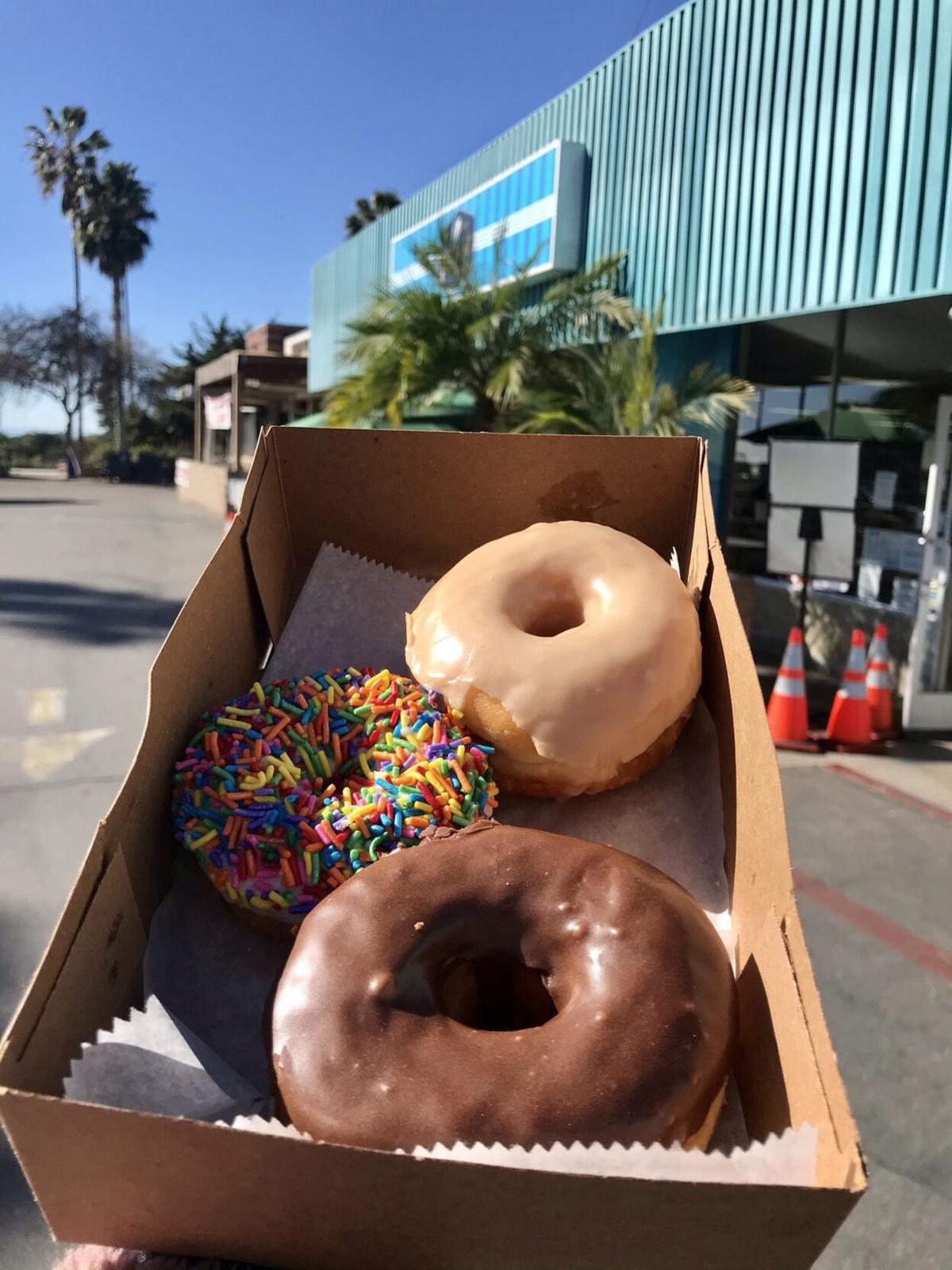 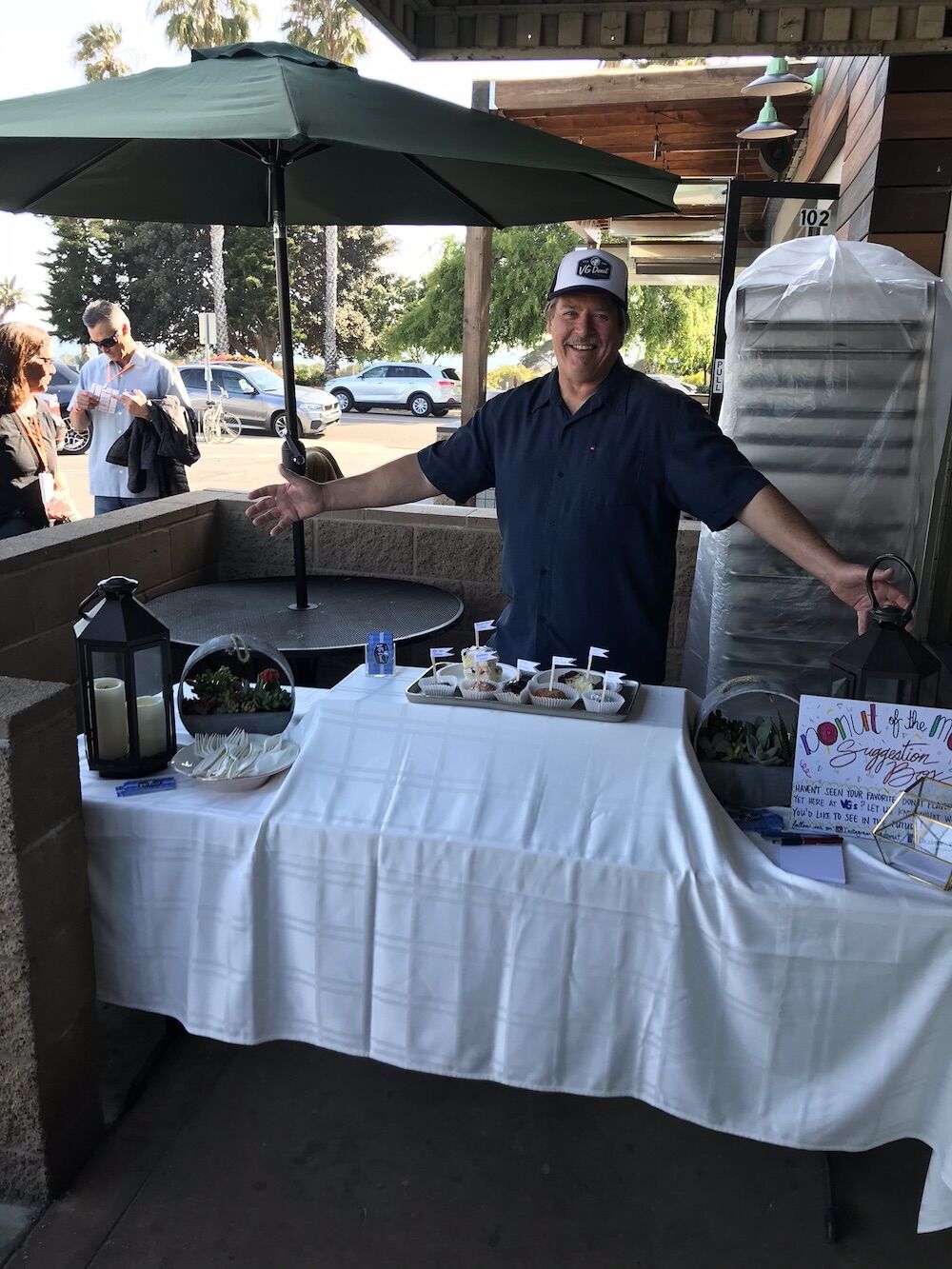 The white-haired motorcycle man choked-up Joe. Not messily so. But Joe instantaneously swole with emotion, was unable to speak for a few beats, took an eventual rub of the eye to shove the vulnerable, human moment back inside.  To regain that gentle-quiet pride the owner of the estimable VG Donut exudes.

Motorcycle man overheard us talking, could tell I was interviewing Joe, seemed to sense this was going to go on record. So he stood, walked over, politely interrupted, and offered his testimony.

“Sir,” he said, “I used to ride my motorcycle down to your shop every week. I just flew back into town, and before I came, I checked your website and called to make sure you were still open. I had to bring my wife and son here.”

He pointed to his wife and son. The son, both mortified and a little excited behind jet-black teenager bangs, meekly waved. The wife beamed.

“I’ve traveled a lot,” motorcycle man said, reaching the summit of his proclamation… “And this is the best donut I’ve ever had. Thank you.”

That’s when Joe got choked up. A few seconds after the man leaves, he points over his shoulder in his direction and says, “That’s why.” Nothing else needs to be said.

I don’t pry. Joe Mettee seems to be the kind of guy who’s fine sharing his donuts or his good Baja fishing spot with strangers, but not the cause of his emotions. So I can’t tell you if it’s because he is just so damn relieved his third-generation family donut shop is still here, despite the year being godforsaken and all. Maybe as the terrible math of the pandemic gets less and less bleak, as the light at the end of the tunnel dilates, heartfelt proclamations of support from strangers twist the release valve and we let pent-up emotions leak out, little by little.

Or maybe, like us all, it’s a constant struggle to find meaning in work—especially as the years pile up. And the fact that a man wanted to bring his family to Joe’s 52-year-old donut shop in a strip mall on their vacation, to show it off as if he’s showing off a critical piece of himself—well, that reaffirms purpose.

I can tell you Joe talks in broad strokes about retirement. He started working for his dad here when he was about 14, which is probably about 50 years ago. He talks about passing it on to his daughters, Megan and Sarah, and torch passings are often pretty emotional. Or maybe the emotion is just because Joe’s eyes are glassy from early mornings of honest work, because it’s hell to find employees right now, because the pandemic has wrought hell on supply chains (and, thus, made good buttermilk harder to get), because we all feel lucky to be wherever we are.

VG Donut is legend. Opened in 1969 as a tiny hole in a strip mall, campers at the San Elijo State Beach across the 101 would wake up and smell their immediate future. VG became the city’s surf donut. One before surf, one after surf, one instead of surf. Their interior decor is linoleum and wet sand. Designer donuts are going for $2.50-$4.50 now; VG’s base models go for $1.35.

“My dad always said you can make more nickels than you can dimes,” says Joe.

Joe is theoretically a nickel-donut guy in a dollar-donut world.

“I could charge more for them but then not everyone would get to enjoy them,” he says.

VG apple fritters are flat and square and thin, which increases the crispy edges (the best part of a fritter). They’re also ribbed, which creates little luges to collect the glory of the glaze. Their blueberry buttermilk was as popular as Drakkar Noir in the ’80s, but unlike Drakkar, it still is. There’s the pinecone cinnamon roll—which starts with the normal base but is topped with concentric c-roll bits until it resembles a pine cone or a croquembouche. The glazed shoe—a mutant cross between a traditional glaze and buttermilk bar, shaped like a classic buckled shoe.

Joe is a portrait of a San Diegan at six decades. There are years of surfing and fishing behind his longish gray hair. His skin is tanned in that permanently caramelized way, as if the sun altered not just his surface tones but the deeper atoms of him—giving him that calm, balanced, irrevocable tattoo of a life lived outdoors. He looks like bonfires and wanderlust.

“I like working with my hands,” he says when I ask him why he still does this. “My wife Becky has suggested we get a house in the mountains. But I need to be here. I get to come to work everyday and stare at the ocean.”

People often wonder why there’s not a second VG location, a third. The answer’s pretty simple: while VG’s legend has been earned and etched into San Diego, it is still a small family business.

“I guess you posted something about five of the best donuts in San Diego,” says his daughter, Sarah. “We had someone call. They said they’d seen the story and they felt it was a big mistake that we weren’t on there. They were so upset for us.”

When you serve a neighborhood this long, when you live up the hill—when you do the hard work and shake the hands and hug the kids and sponsor the little league and send buttermilk bars to the elementary school functions—people feel protective of you. Because after 52 years, it’s not just a donut shop. It’s a totem for a way of life, proof that not all good things fade, a depository of a city’s collected nostalgia. It’s a youth prolonged, indefinitely.