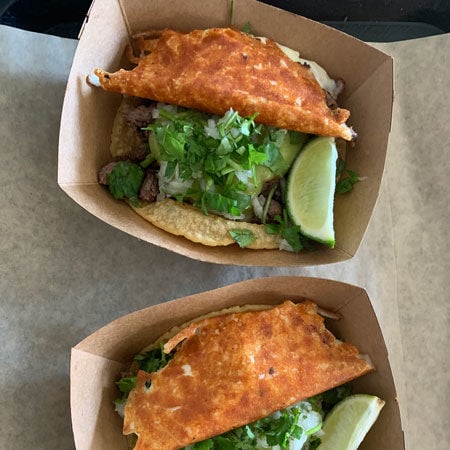 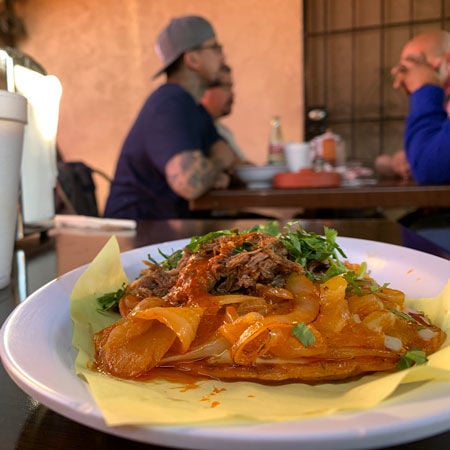 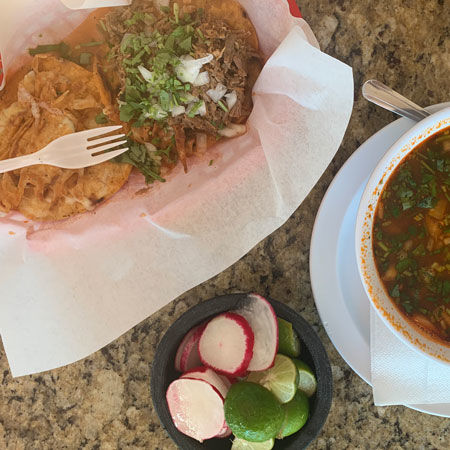 Long ago I came to San Ysidro for very different reasons. Not old enough yet to drink—to grow those great, dark alcohol wings, which would let me hover above the brutal self-consciousness of teenagerhood—we’d park near here to walk into Tijuana. In 1987, laws were fewer, and easily navigable. We were probably unaware how terrifying, or at least annoying, drunk gringo teens were to the Mexican-American families who lived here, grindstoning a life for themselves and their loved ones south of the border. Today I see the extreme work and art and culture of this neighborhood. I see it in the hand-painted signs, the street carts, and the driven and tired eyes of Priscilla Curiel—chef-owner of the adorable, immaculate hole in the wall, Tuetano Taqueria. "I just had a baby," she says, her hair akimbo. And yet she’s here, hand-crafting tacos and quesabirrias and bone marrow tacos. Cranking out her meaty, collagen-rich birria consommes. Tuetano’s been talked about a lot, with good reason. That bone marrow taco is probably the best thing on the menu, as Marie Tutko recently noted. But her carne asada is also delicious, good beef, well marinated, hovering in that axis of deliciousness between crispy and moist, with cheese griddled until crispy and browned as hashed potatoes, with onions and cilantro and avocado crema. One of the better carne asadas in town, served in a lovely little homespun taco store.

They had to put long benches that almost look like church pews in the parking lot of Ed Fernandez. The wait is long, no reason it should be uncomfortable. Located down an alley, sandwiched between a white steepled church and an auto body shop, lies one of San Diego’s greatest success stories. Every weekend the people of Nestor gather here for the three brothers’ birria and menudo. More on their story to come, but their quesa taco birria is one of the most delicious tacos I’ve ever tasted. A corn tortilla is topped with melted cheese, then birria meat (a long-stewed specialty of Jalisco, Mexico) is crisped up on the griddle and heaped on top. Onions, cilantro, hot sauce, and lime. All for a grand total of less than $4. Nothing helps a Sunday feel less close to Monday than tacos like these.

This National City standby seems to be on a quick expansion route, now with an outpost in Barrio Logan and Vegas. It’s a very simple concept, a small-menu a la In-N-Out filled with birria-related creations. The birria itself needs a little help from hot sauce and lime, but the quesabirria—corn tortilla with melted cheese, topped with birria—is excellent if you load it with that hot sauce (one of the better hot sauces around, though be careful, it’s a scorcher).