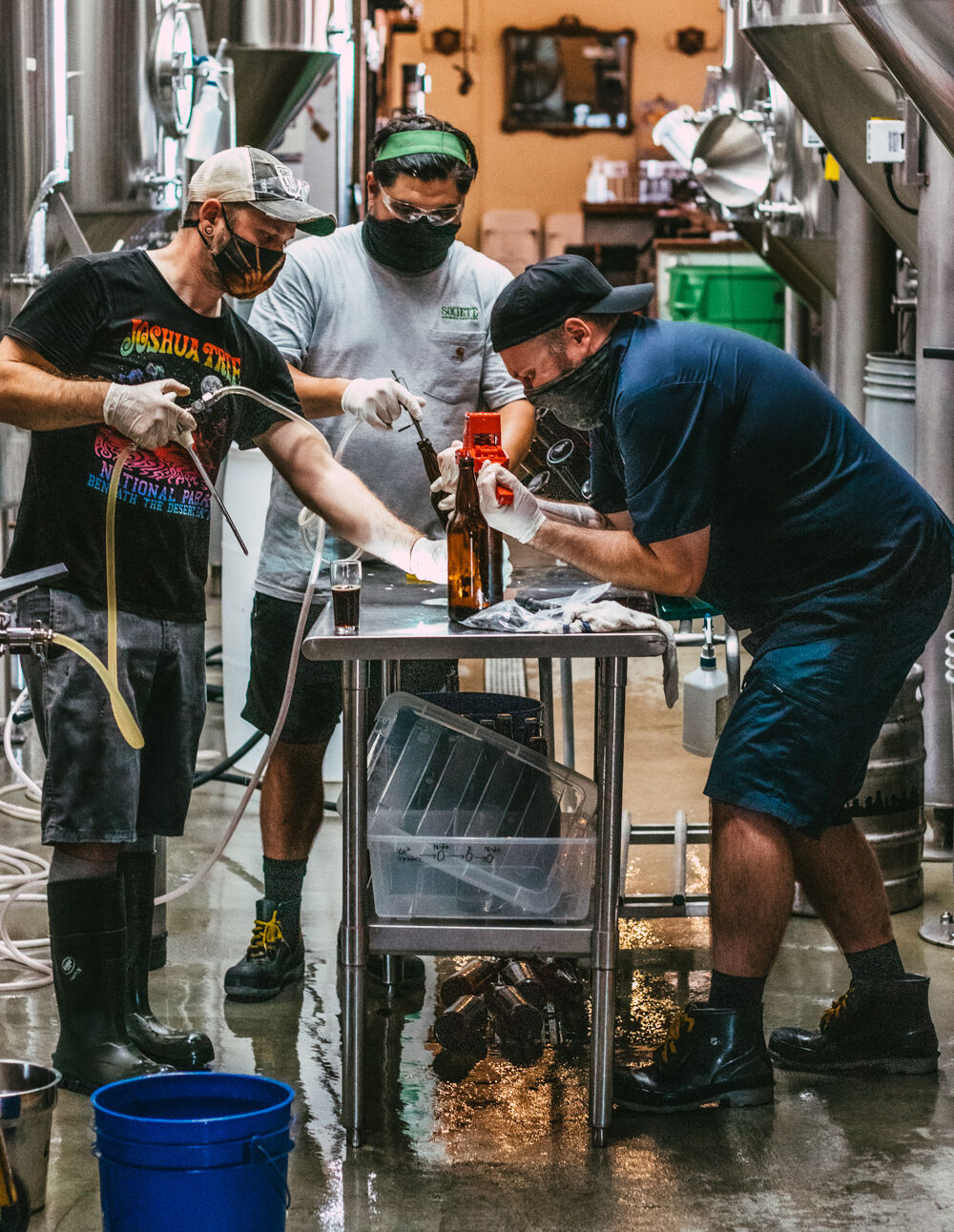 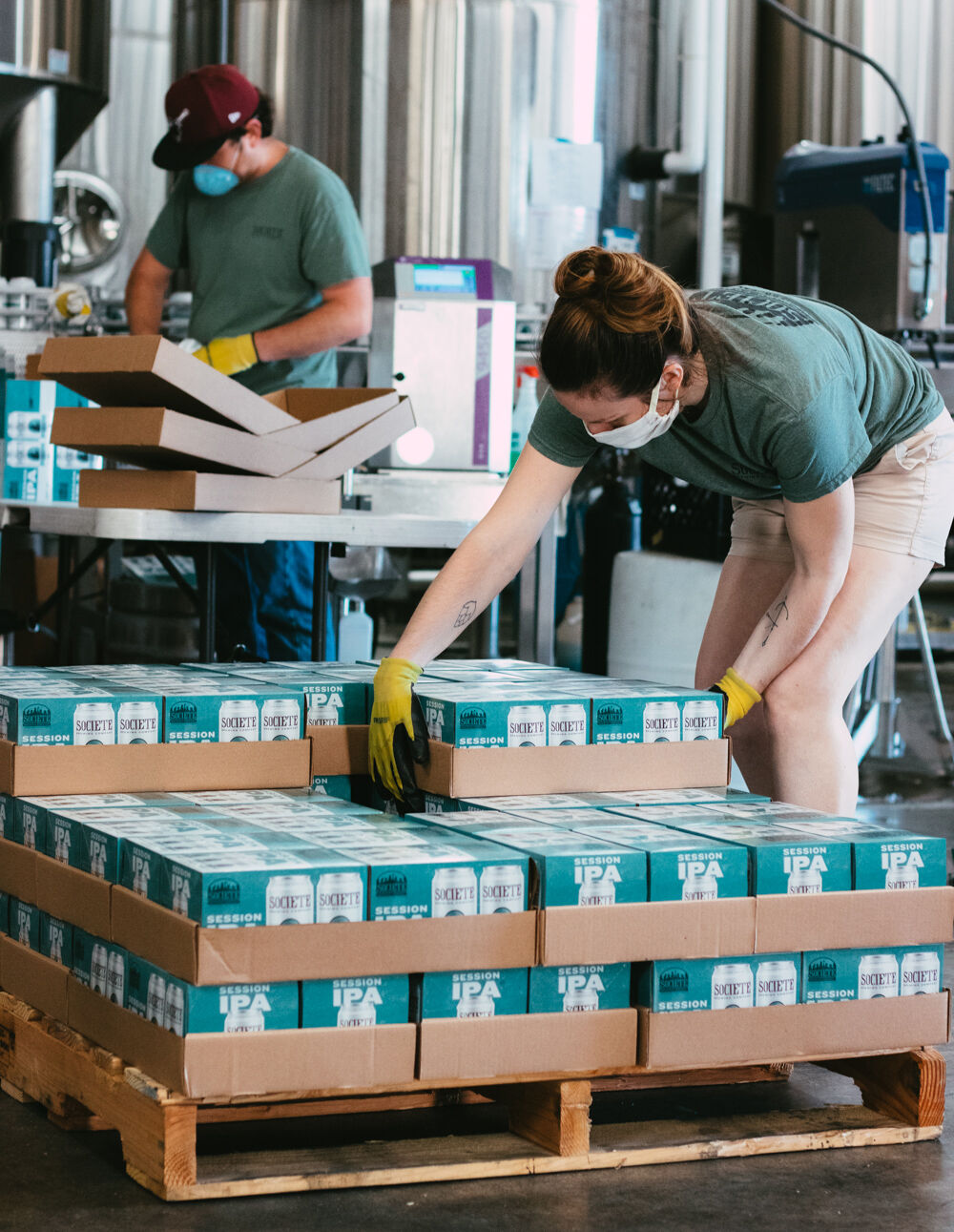 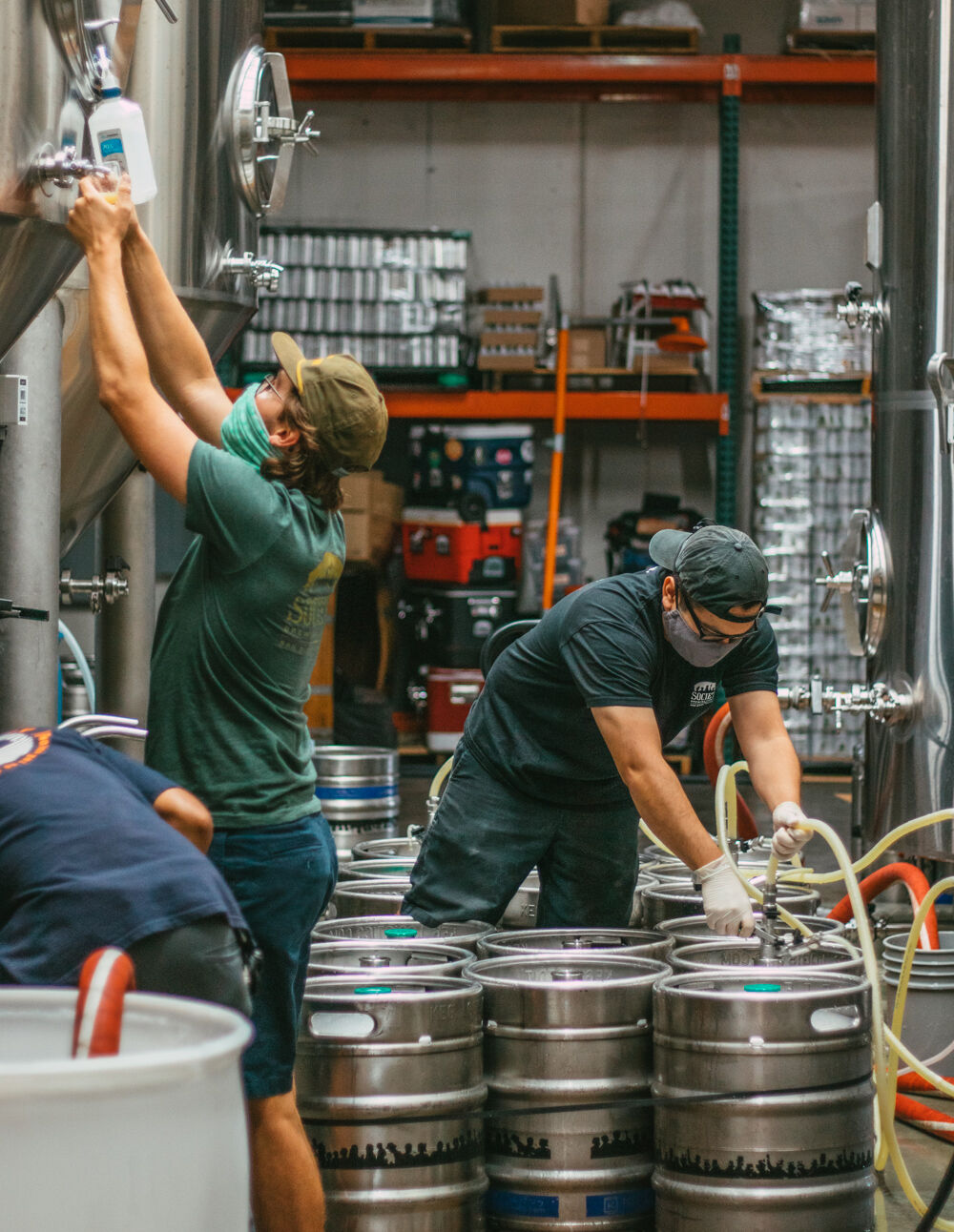 So here’s how this is going to go. I’m going to lay out the specific struggles the craft beer scene is facing right now because of the stupid pandemic. I’m doing this because craft beer is a bedrock of San Diego’s maker community and its economy. But since we have enough doom and a surplus of gloom, I’m going to end this with the story of how one San Diego craft brewery made it out, went from laying everyone off to tripling their growth and being able to hire a lot of craft beer professionals who had lost their jobs.

After spending a few days trying to get my head around the situation, here’s what I’ve learned. Most small craft breweries depend primarily on two sales mechanisms—on-premise (restaurants, bars) and their own tasting rooms. The Brewers Association’s chief economist, Bart Watson, estimates that on-premise sales accounted for 45 percent of craft volume before the pandemic. Having bars and restaurants shuttered or limited for the past eight months has been a killer for craft beer sales. Craft brewers have had to pour hundreds of thousands of barrels down the drain, and send trucks to pick up kegs from restaurants and bars that simply aren’t selling because of the restrictions and shutdowns. (Note: This is not a screed against shutdowns. I’m a fan of human health.)

Now, depending on which analysis you look at, Americans are either drinking a ton more during the pandemic or about the same. Taking a survey of my kitchen, I’d say it's more. But when Americans drink at home, they tend to drink wine or spirits, beer not so much.

Most people are limiting their shopping excursions during the pandemic, so they’re getting their alcohol from a single grocery store or from an online retailer. In order for a craft brewery to take advantage of the increased alcohol sales at grocers, they have to be on the shelves. That means they have to be bottling or canning. Many small craft brewers don’t have the financial or organizational resources to pull that off—so their whole business is putting beer into a keg and getting it to bars and restaurants. Even if they have the money to start canning or bottling immediately, they then have to convince a store to take them. And during the pandemic, stores are too busy to take on too many new products—though since they’re selling stuff so fast, one could argue that having more suppliers is better.

Also, because we’re all buying everything in bulk, we don’t tend to go for a four- or even a six-pack of local craft beer. We go for the “large format” beers—12-packs or cases. Most grocers don’t sell 12-packs or cases of craft beer, though of course you can get a Budweiser or Coors in that size.

Add to this an aluminum can shortage. Even before the pandemic, American aluminum can manufacturers couldn’t make enough. The reasons are many, but mostly because A) soda companies were moving away from plastic bottles for the environment, and cans are far more eco-friendly; and B) canned sparkling waters, hard seltzers, wine, and cocktails have snatched up all the cans. Can manufacturers are having to turn away new customers. Craft brewers could pivot back to glass bottles, but that’s not ideal because A) cans are a penny cheaper, and when you’re producing in bulk, a penny matters, B) bottles are heavier, increasing the cost of transport, and C) they don’t store as efficiently—imagine stacking 100 bottles on top of one another as opposed to 100 cans.

The silver lining is that craft beer has seen an uptick in retail. For most, though, it’s not enough to offset what they’ve lost from sales at bars and restaurants. Locals are ordering cases of beer from local brewers and getting curbside pickup. Those with parking lots and outdoor spaces have created beer parklets. Still, craft beer was estimated to be down 12–15 percent in the first half of 2020 compared to 2019. The Beer Institute, the National Beer Wholesalers Association, and the American Beverage Licensees predicted that more than half a million jobs supported by the American beer industry will be lost by the end of the year.

We get it. Every industry is getting crushed. These are just specifically, as I understand it, the ways COVID-19 is affecting our craft beer industry. I’m sure this isn’t a perfect analysis and I’ve missed some things, but you get the gist.

For craft brewers, surviving all of this depended on getting into cans and bottles and getting on the shelves. And, as promised, here’s the story of how one San Diego craft brewer—Societe Brewing Company—was able to do just that. When the pandemic started, cofounder Douglas Constantiner says they lost everything overnight. They let everyone go. And then they turned it all around.

Troy Johnson: How bad was it?

Douglas Constantiner: We lost 92 percent of our income overnight. Vaporized. Every single thing we brew for sale, we had to dump. That revenue supported a lot of employees here and in other industries. For every craft brewery employee, six other jobs created—in distribution, delivery, increase in bar staff, restaurant servers. This industry has been devastated.

We’d launched our cans two weeks prior to all this happening. It was only eight percent of our revenue at the time. And our employees. We’re fighters, as restaurateurs are. Probably the toughest employees I know. The first thing our VP of operations did was lock in aluminum for as long as possible, and we’re now locked in through next year. Our sales team, who was largely on-premise draft, we retrained them for grocery stores. The mindset we had was, this is gonna be here for a long time, let’s pretend this is going to be forever. Let’s pretend kegs are gone and never coming back. How do we become a permanent packaging facility? We saw people were being furloughed from other breweries, and we were able to hire them—specialists in filtering, or canning, or brewing. We brought on as much talent as we could.

We had bartenders who were working the canning line. Brewers helping with warehouse facility stuff. It went back to a startup mentality—I don’t care if you work behind a desk, you’re going to have to clean the bathrooms. Everyone was all in.

And your investors were fully behind this?

We got a new chairman a year ago and he’s been a driver. We furloughed everyone, we made the cuts. Five days after telling everyone we have to do it, the world is going to end, we’ve got this zombie business, he said, “Bring them all back in; let’s grow this.” I said to him, “I don’t know how we’re going to do this.” And he said, “Well, you’re going to figure it out.” Bringing everybody back was our first big win—seeing everybody, seeing them smile, and everyone respecting the guidelines and not having to shut down.

What about your brewery in Kearny Mesa?

We set up an online shop to go; we would deliver it straight to your trunk. We secured a license through a shipping service to send beers to customers in California overnight. We went from 14 beers to five, focused on our core beers that we could can, bought the bulk raw materials. We partnered with a food provider—Fit Tacos—and we set 15 tables and ten tents outside. We had morning huddles with our team every single day and said, “What ideas can you bring to the table to keep us alive?”

And you managed to land the big retail accounts. You got in the door.

We’ve been able to get set up in Costco, Trader Joe’s, Ralph’s, Total Wine, Grocery Outlet. It wasn’t easy. The buyers didn’t need to bring in new product, because everything was flying off the shelves. So our sales guys got nicely aggressive. The approach was, “I understand you can’t take on more suppliers, but customers want this, and if the customer wins, we all win.”

How much beer are you back to brewing?

Triple the amount we did in 2019. I think a lot of that is the floodgates opening. When we started canning, we said, “Let’s be the size that industry people think we are.” People thought we were 10 times bigger than we were. Don’t let off the gas pedal. Stay on that heavy foot. We’re not done. We have a lot more beer to sell.

What about the industry as a whole?

The biggest challenge is, the restaurants are shut down. Not everyone is able to can or bottle. The real small brewers are facing high costs. Packaging beer is expensive. The supply chain is broken. For instance, when there’s a fire in California and the freeway shuts down, we’re not going to get our grain or packaging materials. One of the companies who prints our six-packs had to shut down because of the fires. Who’s gonna drive the trucks? Freight and logistics make the world go round and it’s difficult for those companies, too. The end consumer gets what they want because people drive trucks. If one facility has a super-spreader event and they have to close, that drives the price up. It’s a melting pot of problems, but we’re going to be okay. The challenges are tough. But I believe in humanity.

Everyone’s back to being the underdog.

Anybody who’s a craft brewer is used to being the underdog and used to fighting. If it’s not one thing it’s the other—succeeding through adversity. It’s personally scary and challenging trying to keep our people employed and keep people drinking.

What’s your biggest silver lining of all this?

Doubling down on our staff, and letting them know, “We’ve got your back because you’ve got ours.” We were doing beer tastings on weekly Zoom calls for the tasting room staff just to keep everyone together. Business is never easy. Part of the fun of it is the fight. And everyone here got creative.