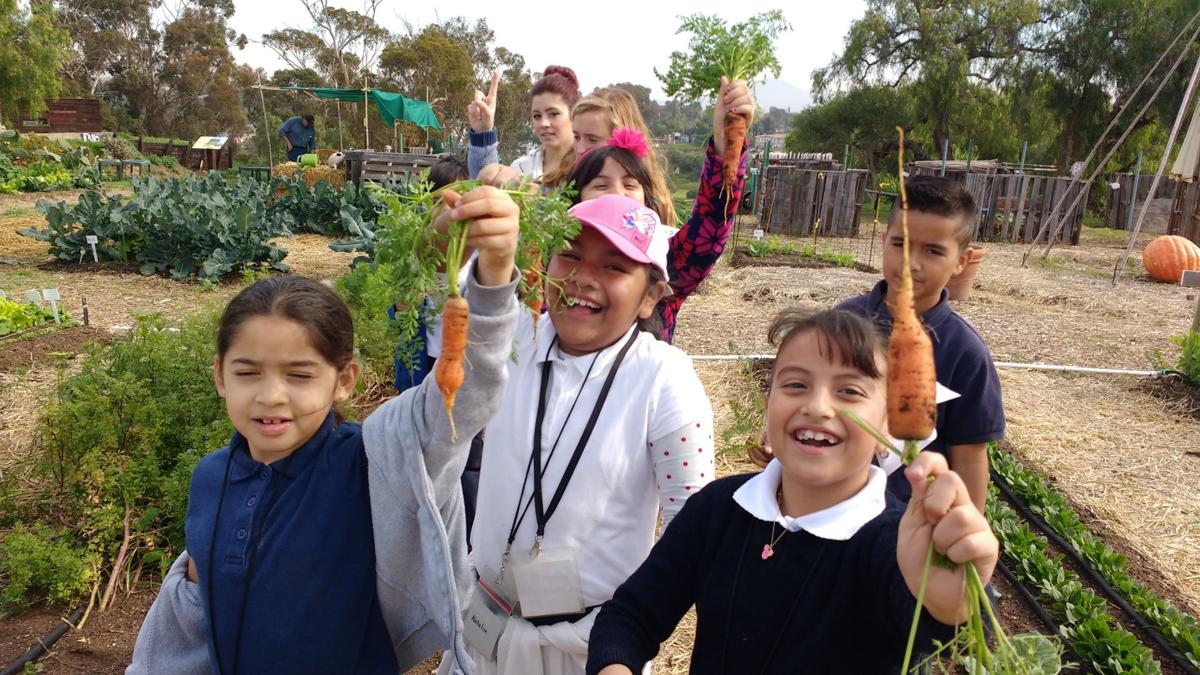 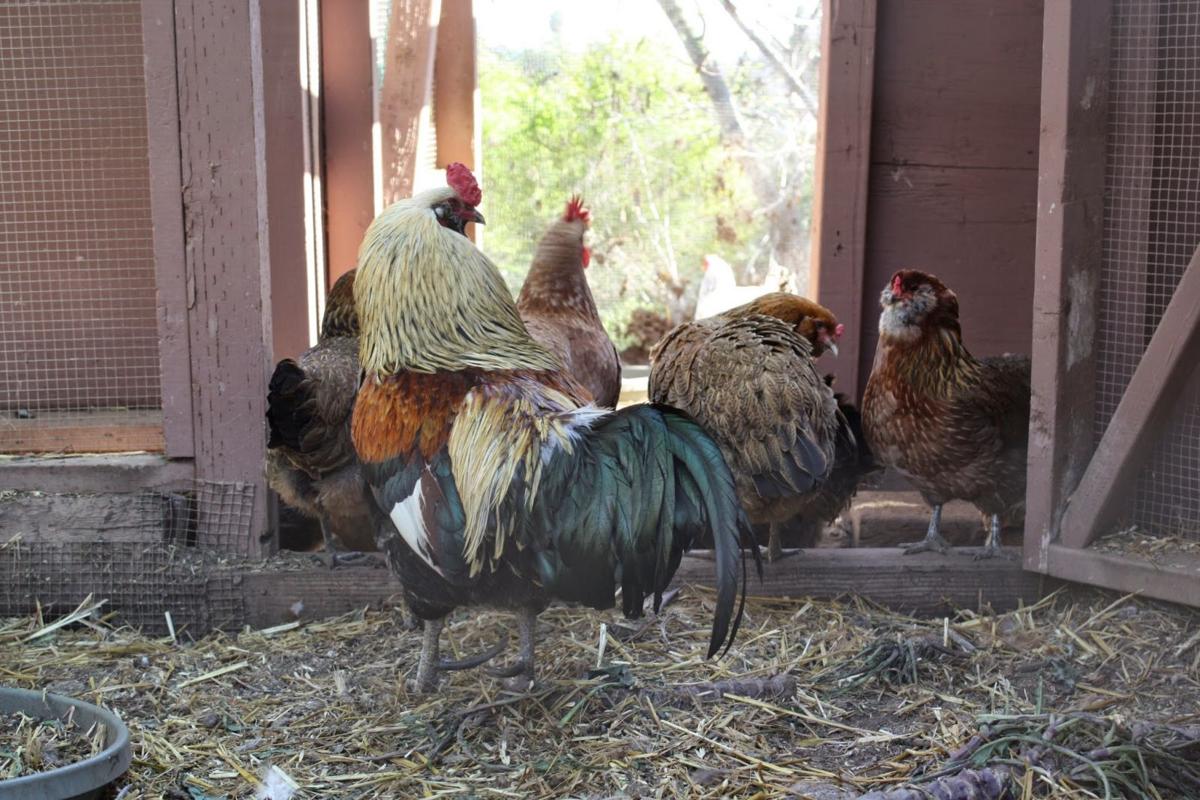 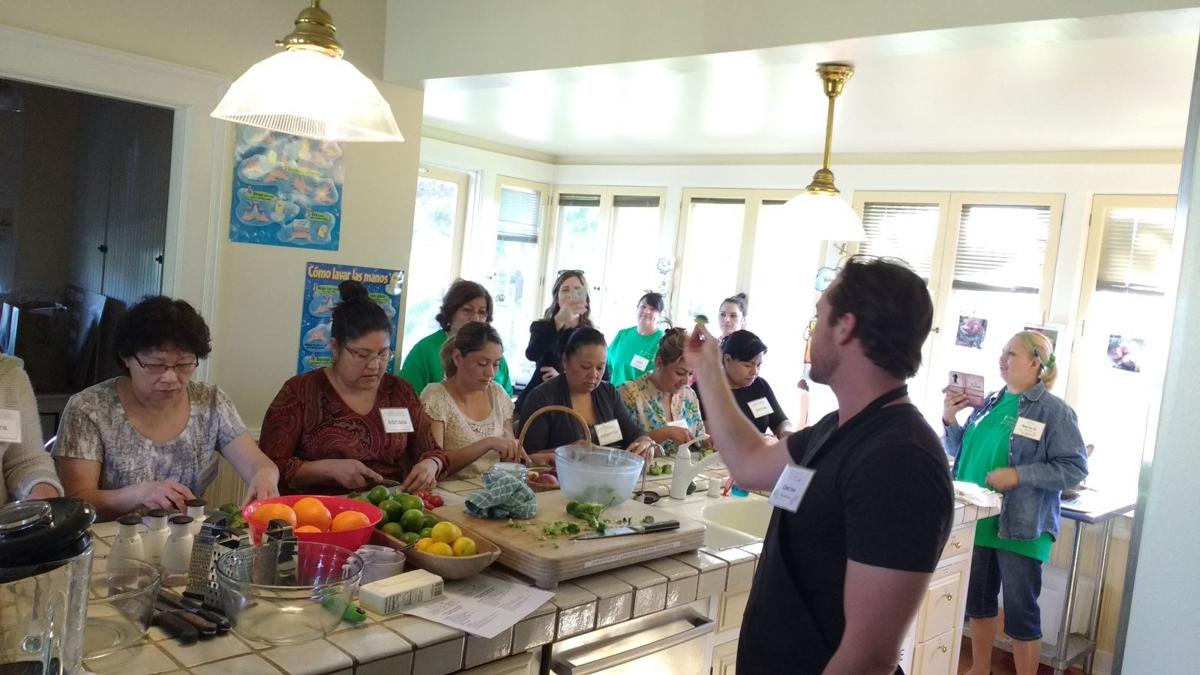 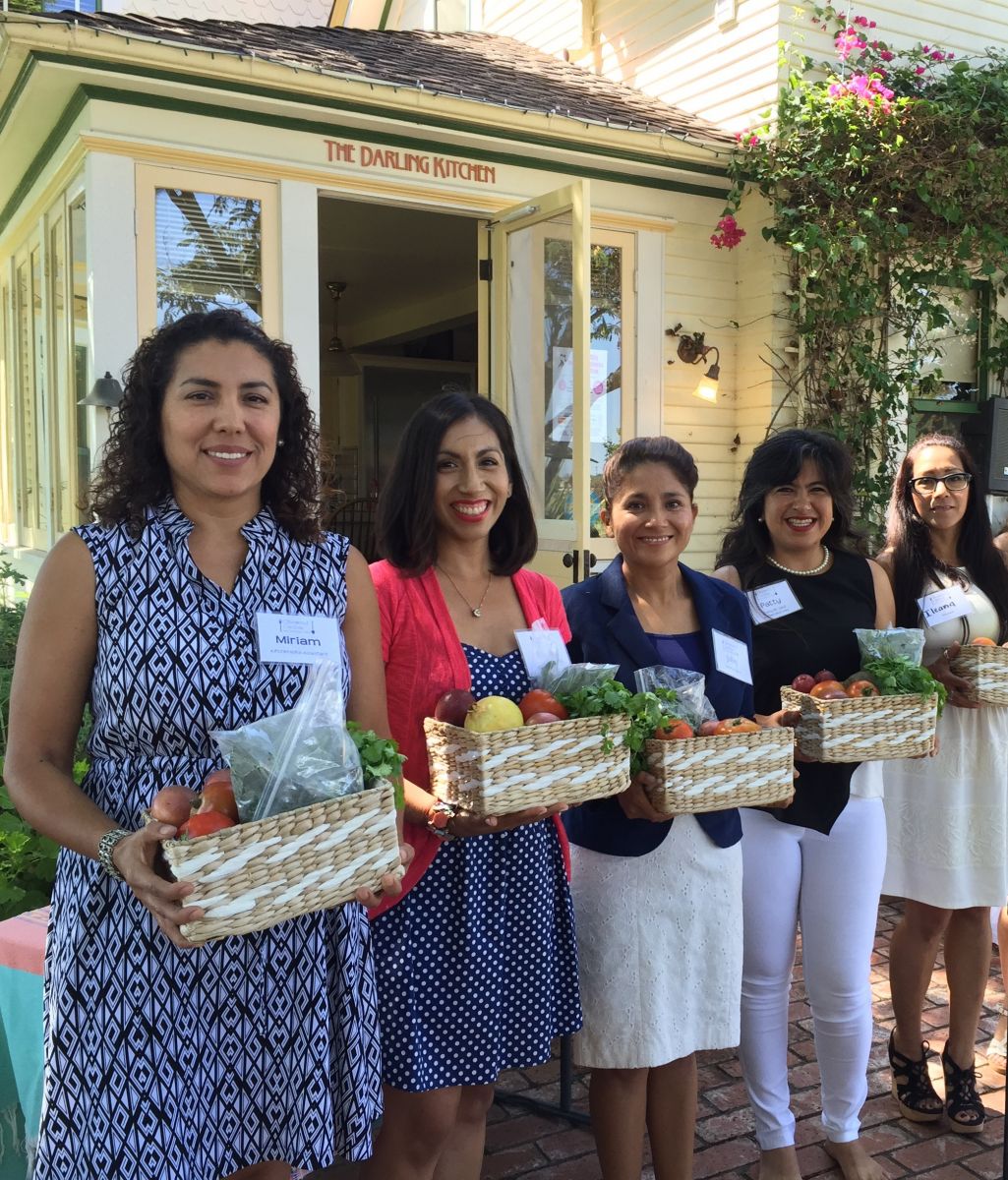 I'd always heard great things about Olivewood Gardens & Learning Center in National City. A place to learn about and grow food, being used as an educational center for a community struggling with obesity and lack of nutrition. On March 20, I'm honored to be the speaker at their Cultivating Conversation Dinner Series, an intimate dinner outdoors with Tender Greens. A couple days ago, I talked with Olivewood's executive director Healy Vigderson to get an idea of Olivewood's story so far. It's a story about counteracting decades of junk food indoctrination. Please enjoy, and buy one of the remaining tickets to the event. Maybe donate time or money to Olivewood if you feel so inclined. Or just go take a tour.

Coca Cola spent $3.5 billion on advertising in 2014. Rival PepsiCo spent $2.3 billion. According to the Center for Science in the Public Interest, companies spend $1.79 billion marketing packaged (mostly junk) food to children. Seventy percent of ads on the most popular children’s TV channel are for junk food. Eighty four percent of ads on children’s websites are for junk food.

As for healthy food? America spends $280 million each year promoting it. That’s less than 10 percent of the marketing budget for one single soda company (Coca Cola).

No wonder a third of our kids are obese (and two-thirds of adults). Twenty years ago, no U.S. state had an obesity rate above 15 percent. Now 41 states have rates over 25 percent. If the rates stay the same, over half the American population will be obese by 2030. For numbers people, annual health costs related to obesity in the U.S. is nearly $200 billion.

Can a single garden in National City change that?

The community in South San Diego is considered a "food desert." Food deserts are classified as places where it’s real hard to get affordable, nutritious food. In food deserts, you don’t have Whole Foods or even an Albertson’s. You have corner stores that sell Twix bars and Mountain Dew. You have fast food out the ying-yang. According to one study, people living in poor neighborhoods have 2.5 times the exposure to fast food restaurants than the rest of the population.

National City is a poor neighborhood. According to a 2007 study, 34 percent of National City’s kids live in poverty. Eighty-five percent of them qualify for free or reduced cost school lunches. No surprise, then, that the rate of hospitalization for diabetes is 2.3 times greater in National City than the rest of San Diego County.

Olivewood—spread over 6.85 acres of land teeming with giant kale, chickens, butterflies, living things and good earth—isn’t really a garden. It’s more of a university with plants and animals on it. A university that teaches an entire group of people—people raised on and surrounded by the sugar-fat-salt trinity of cheap fast food—how to grow and cook real, nutritious, tasty food.

Not just any food. Sixty-three percent of National City is Latino or Hispanic. Try to tell someone they should abandon their culinary-cultural heritage of carne asada and tamales for, what, a kale salad? Good luck. At Olivewood, some of the best chefs in San Diego take culturally relevant foods and recipes and give them a healthy spin. Maybe that’s using grapeseed oil instead of lard. Or make a cauliflower ceviche. Teach them to add cut fruit to water for an exciting drink instead of reaching for the 2-liter bottle of soda.

The fact is, Americans are wildly, grotesquely removed from the process of growing and making our own food. We let companies do it for us, and those companies haven’t done a very good job. Companies are defined by their sales numbers. To increase those numbers, they most often load the food with fat, salt and sugar—so we develop an addiction to it, and that addiction fuels sales.

Olivewood teaches third, fourth and fifth graders about real food—about the importance of healthy soil, about growing food, about harvesting it and then about cooking it. Olivewood also has their "Cooking for Salud" program. Twice a year, about 60 applicants apply for the program. Olivewood has the funding to select 15 of them, at no cost to the participant. Over seven weeks, three hours a week, these women learn from Olivewood’s own chef-educators—plus some of the top chefs in San Diego who donate their time, like Matt Gordon of Urban Solace or Margarite Grifka (ex-Starlite Lounge, currently at California's Table) have done in the past—how to grow and make healthy food.

On March 17, they’ll graduate their seventh generation of kitchenistas (115 graduates), who continue to meet once a month after the program ends to talk about food, healthy cooking, growing their own herbs, etc. A documentary film on the program, The Kitchenistas of National City, is making the festival circuit and winning awards.

"We target families who wouldn’t be able to afford classes like these," says executive director Healy Vigderson. "We have funding to do it twice a year. We’re looking for investors to expand it to three times a year. The graduations are a big deal. All the ladies prepare a dish, the mayor of National City comes."

Vigderson says the program has a long waiting list. "We reserve half the spots for National City residents. The rest are from around the county, mostly the south region. We give preference to participants who have a family member with a chronic condition that can be improved with better food. Or if they have children at home, which will lead to a longer lasting impact."

The main focuses of Olivewood’s teachings about nutrition?

Reduce the big three crutches of unhealthy foods—sugar, fat and salt. Kitchenistas learn to use natural fats (like avocado) and healthier cooking oils, like grapeseed. "One of the things we teach in all our classes is reduction of sugar," says Vigderson. "We want people to learn how to make their own granola and jams so they can control the amount of sugar that’s going into them. We take recipes they’re used to making and we use no sugar, or use agave or honey instead and show them how delicious it can be. We also focus on eliminating sugary beverages. We give them alternatives. We call it spa water—take a glass pitcher and cut up fruit or put lavender flowers or limes in it. That gets them to increase their water consumption and eliminate soda. We also teach them to lower their salt intake by using herbs for flavor. Chef Joe Burns of Waters Catering teaches that class. We send them home with their small potted herb gardens."

Class by class, it’s working—even if some of the participants are wary in the beginning.

"When they come into the program, one of their biggest concerns is that their husbands or kids won’t eat the healthier food," says Vigderson. "And then they go home and they find their families love it. They’re actually asking for it. One of the recipes is a cauliflower ceviche. One of the kitchenistas said, ‘My kids are eating cauliflower now! There was no other way they would have eaten it before!’"

The immersive experience—and the epic natural beauty of the land—is what makes Olivewood different than, say, just trying to recreate a healthy recipe from a website.

"We find the most impactful is the hands-on experience. They tell us, ‘This is not like any other class because I’m actually DOING IT.’ We’re not just giving them a recipe for a healthy dish. We bring in chefs from different restaurants. Chef Matt Gordon here last week. He teaches the meats and meat alternatives course. He was teaching the kitchenistas what kind of pans you should be using and why. This is why you should use grapeseed oil instead of olive oil. They’re cooking it, they’re eating it, they’re experimenting with the flavors, so when they go home they’ve already made it and understand why. The next thing is, ‘Here’s where you can buy this stuff.’"

The other part is cultural relevance. The families of National City have generations of traditional Mexican recipes—often not written with nutrition or health in mind. This season's Top Chef contestant Chad White taught the traditional Mexican class until recently. When White moved to Portland earlier this year, chef Miguel Valdez of The Red Door took over.

"Chef Miguel originally sent us his recipes," recalls Vigderson. "And we had to send them back because they weren’t healthy enough. He was naturally frustrated with us. He tells this story to the class: ‘I had to call my grandmother and ask permission to change the recipes—I couldn’t change her recipes without permission. She said, ‘Of course, mijo.’"

The effect hits home with the kitchenistas. If one of the better professional Mexican chefs in San Diego can change his recipes to be healthier—with grandmother’s blessing, no less—so can the kitchenistas.

"It resonates so well because that’s THEIR STORY," says Vigderson. "They have their traditional recipes, which are their connection to their ancestors and families. To change that feels like betrayal. But if they see Miguel can do it, so can they."

The chef and food community has shown huge support for Olivewood since it opened in 2010. Whether it’s chefs like Gordon, Burns, Valdez, Grika, or Barleymash chef Kevin Templeton, who keeps his compost from the restaurant and drives it out to Olivewood once a week on his own time and dime. All told, over 2,000 volunteers have donated over 30,000 hours of service.

Olivewood is constantly on the money-raising trail. They need donors. For example, they’re looking for $7,500 to put subtitles on the Kitchenistas of National City documentary, so that they can distribute the film in Baja and spread the message about healthier Mexican food. They’d also like to expand their services, enroll more kitchenistas, and help replicate their successful program across the U.S.

Vigderson finds that the beauty of the place is the best persuasive tool she has.

"I continue to be amazed by the power of this physical place. When people come here and step on the grounds, and they’re surrounded by the beauty, you see their shoulders relax and their breathing slow down. They change. We recently had a meeting with a city official type person. He had said no, no, no to all the things we were suggesting. We got him to come here, and he stepped foot on our property and his whole mentality changed. Just physically being here, he started smiling, relaxed, started talking about his kids and his family. He got it."

"I'm sitting here watching huge butterflies fly around outside of my office," she says. "There's a chicken."