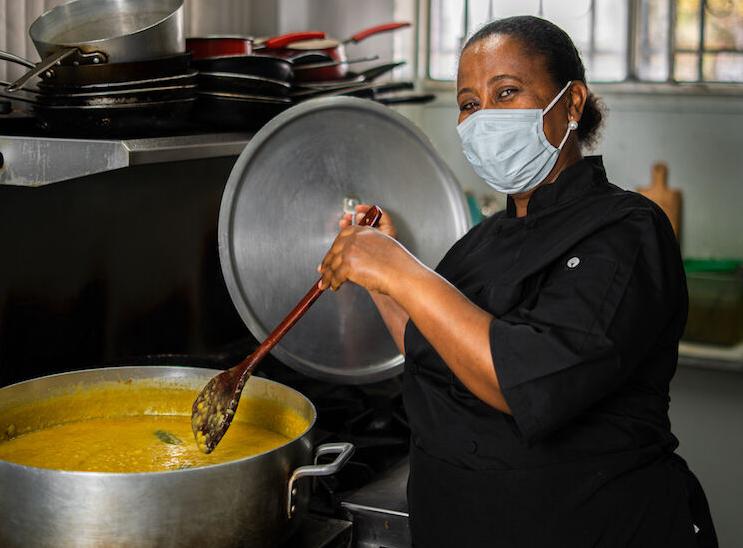 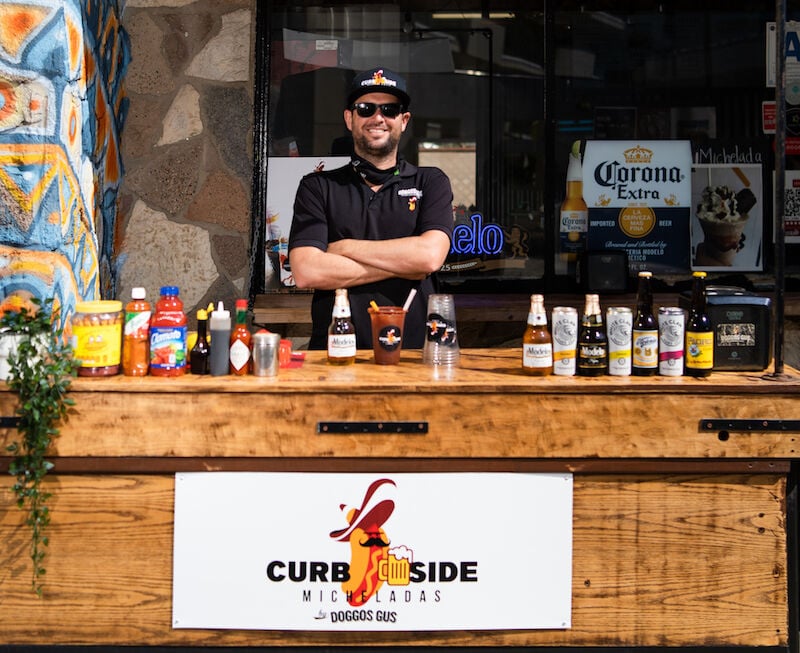 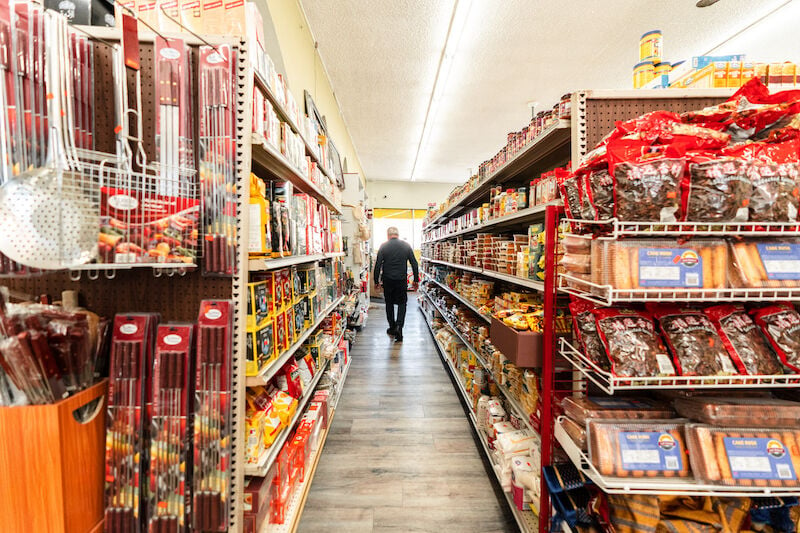 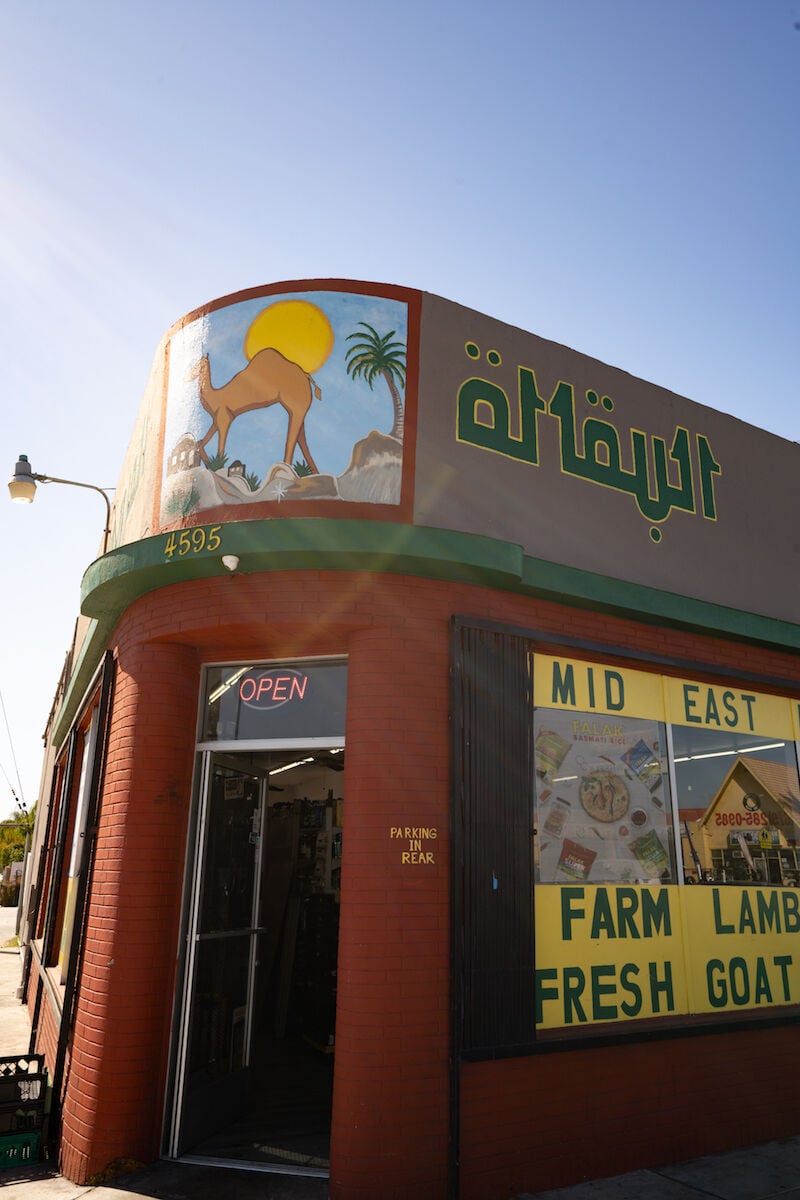 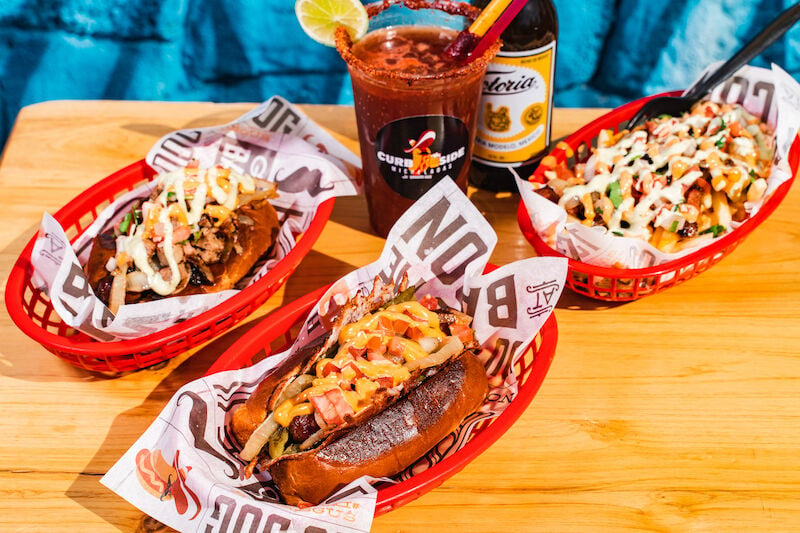 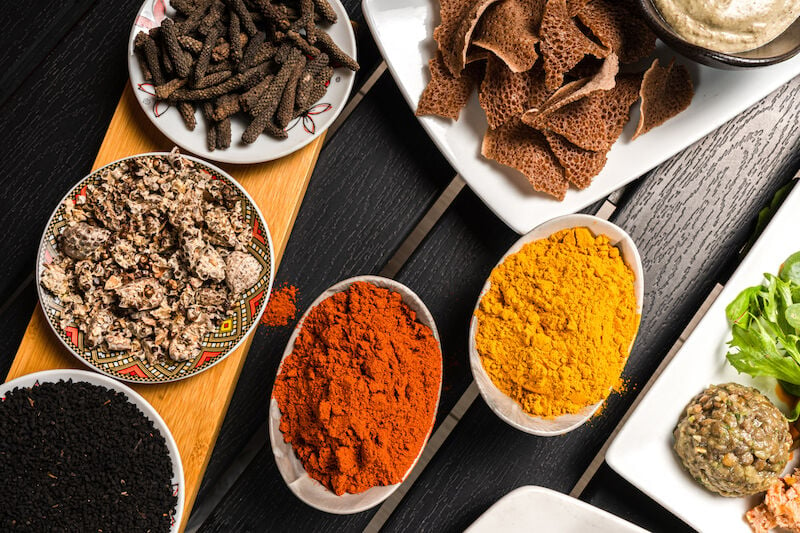 A spread of Ethiopian specialties from Gihon 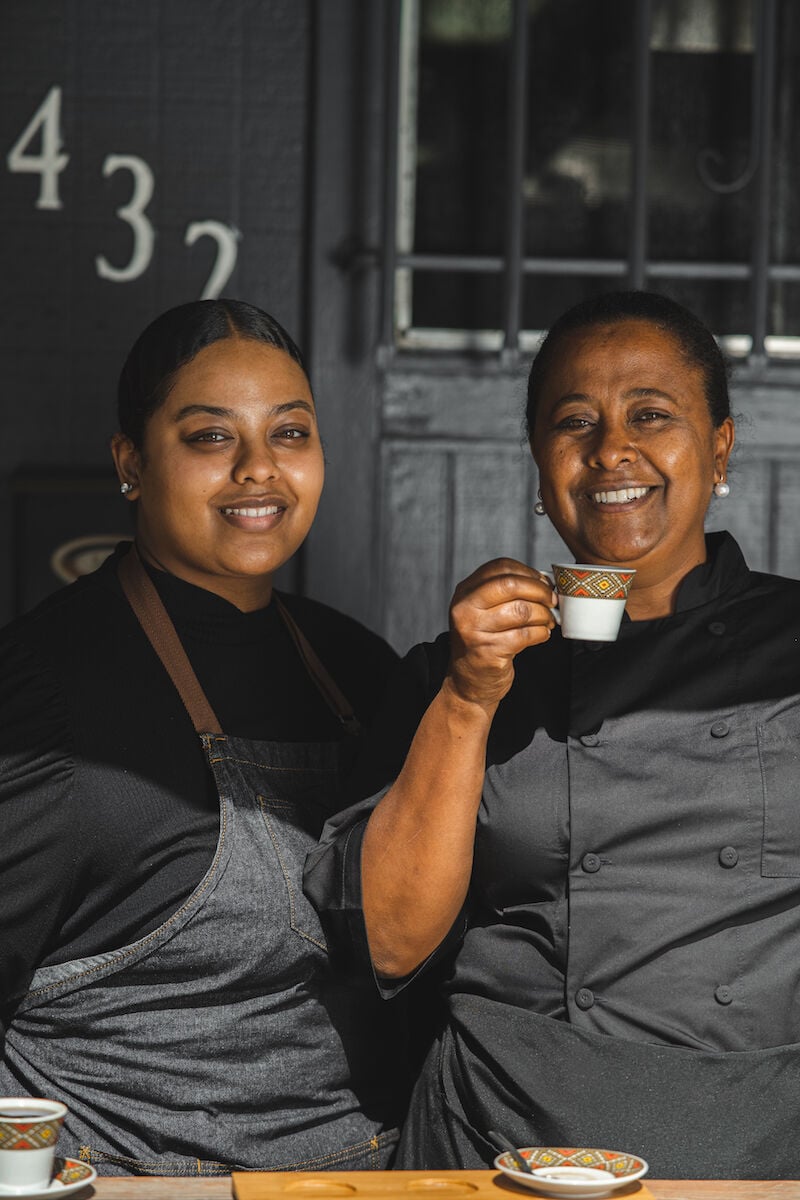 About 9,000 miles east of San Diego, an Ethiopian family picks through their local market for bird’s-eye peppers, green cardamom, and black cumin. They will sun-dry them, grind them, blend them with other spices (careful not to touch the mix with their bare hands, which shortens its shelf life), then ship the Cheeto-colored powder across the world to El Cajon Boulevard. The blend is called berbere, a cornerstone of Ethiopian cuisine and, in this family’s case, a recurring love letter to their sister, Meskerem “Messi” Bekele.

At Gihon Ethiopian Kitchen, Messi and her daughter Lela Makonnen will liberally sprinkle berbere into sautéed onions with cubes of rib eye or lamb or whatever you like, and simmer it for their signature dish, tibs. They’ll serve it on injera (thin, tangy, crepe-like flatbread), which they ferment in-house for two days. For 23 years Gihon has been an emissary of Ethiopian food in North Park, even before the neighborhood was ready for it.

“This place used to be a cafe called Granger’s, and when my grandmother and mom bought it in 1998, the owners said, ‘You can serve Ethiopian food, but also please keep serving burgers; our customers don’t have anywhere else to go,’” Makonnen says with a laugh. “My grandmother didn’t speak a lick of English and had no idea how to make a shake.”

So for about two years in the late ’90s, you could get a prototypical American combo meal as well as the national dish of Ethiopia—doro wot, a spicy chicken stew—at Granger’s Ethiopian. The first iteration of Messi’s dream restaurant in the US may have been a bit of a compromise, but it was an important evolutionary step in San Diego’s food culture at the time. Anthony Bourdain hadn’t yet become the TV James Dean of planetary foodstuff and sent us all on hunger quests, and Jonathan Gold was writing his global food poetry one city too far north.

The more important point is how crucial restaurants are—Gihon, Applebee’s, all of them—for new Americans as they try to build a new life amid the vertigo of Western culture shock. “Especially for those who don’t speak the language, restaurants are the main source of employment,” says Rahmo Abdi, a community organizer with Partnership for the Advancement of New Americans. “As long as you can cook food from your own culture, you can find work while you go to school, learn English, and get assimilated into American culture.”

The most universal language may be math, but cooking is a close second. By the Bureau of Labor Statistics’ last count (May 2020), nearly one in three restaurant workers is foreign-born. Makonnen explains that, over the years, Gihon has acted both as safe harbor and social incubator for Ethiopian immigrants.

“Around 2000, most of my aunts and uncles got to come to America, so my mom had a full staff,” she says. “They learned the language. The Alliance [for African Assistance] would call us and ask if we could find people work. We would hire people fresh off the plane. Ethiopians have a really strong sense of community. We need to be around each other. Plus, my godmother helped my mom find jobs when she first came here, so my mom always tries to give back.”

One of the traditional gestures of Ethiopian cuisine is the gursha, where you prepare a bite by hand and feed it to a person you’re dining with. It’s a sign of love and respect. In non-pandemic times, Gihon is filled with locals and their gurshas. Like all restaurants, they’ve felt the pandemic toll. It’s been touch and go. But Makonnen says they will carry on, whether here or elsewhere.

“My English was worse, but the restaurant culture made everything easy. You make tips every day; many times you get free food. After your shift you have a beer with the cooks. My coworkers ended up being my friends, roommates, and groomsmen.” —Gustavo Tonella, Doggos Gus

Many new Americans are already at risk for obvious reasons (lack of a social and familial safety net; wholly new sets of laws, customs, and social mores; increased nativism in the US) so the pandemic hit them especially hard. According to a congressional study from the Joint Economic Committee (JEC), “foreign-born workers also are concentrated in industries that experienced steeper increases in unemployment as a result of the coronavirus recession, such as accommodation and food services. Approximately one-in-five foreign-born workers lost their jobs between February and April 2020.”

It’s not just entry-level jobs. In 2017, Nation’s Restaurant News reported that 29 percent of all restaurant and hotel owners are foreign born, more than double the 14-percent figure for all businesses. According to the JEC, in the beginning of the pandemic, foreign-born business ownership fell by 36 percent. Overall, business ownership fell 22 percent.

“My first job was at the drive-thru window at Jack in the Box,” says Tonella, who now owns Doggos Gus. “My English was worse, but the restaurant culture made everything easy. You make tips every day; many times you get free food. After your shift you have a beer with the cooks. My coworkers ended up being my friends, roommates, and groomsmen.”

Tonella immigrated from Mexicali in his 20s, working his way through restaurants as a busser, cook, expeditor, server, every rank in the chain—all while getting a degree in marketing from Cal State San Marcos. “In Mexicali, we have hot dogs on every corner just like we have tacos here,” he says. “My mom would take me to the hot dog guy around the corner from our house every week. He was there for 16 years. When he died we were all devastated.”

In 2010, Tonella launched his own catering company with Sonoran-style hot dogs—bacon-wrapped dogs in brioche buns, topped with micro-feasts (the “Carnitas,” for example, loaded with pulled pork, pico, grilled onions, chipotle and avocado crema). His breakthrough, business-wise, was introducing a Mexican tradition to the San Diego market.

“At Mexican weddings, it’s tradition to have a snack at two or three in the morning,” he says. “People here loved it. The bride would be in a wedding dress munching on a hot dog, the groom had mustard on his tux. I’d be the cheapest thing at their wedding, but the best thing.”

In September 2019 he pulled the trigger on his first brick-and-mortar, a tiny storefront on a prime corner of Imperial Beach. He did well through the winter, but for businesses in IB, sunlight is money. Come March, he was primed for the large beach crowds to return and pad the rainy-day coffers. Pier South Resort across the street was sold out the coming weekend; he was booked to serve hot dogs at the Padres’ opening day. Then, pandemic. Over the next month, 92 weddings canceled. “The beach was a ghost town,” he says.

He started Help the Helpers, a campaign where people could buy a catered meal to go to a front-line worker, and Doggos Gus would match it with a second. “We got to feed them and it helped me keep my employees,” he says, noting that most of his employees are first-generation Mexican American.

Over in City Heights, a beloved butcher felt the pinch last year as restaurant traffic slowed to a trickle or dried up completely. The son of a butcher, Hani Ilaian was raised in Bethlehem before immigrating to the US. He found a job at a corner grocery store catering to the city’s Middle Eastern community. Forty years later, he and his son Al own and operate not just Mid-East Market, but also a ranch in Poway where they raise goats, lambs, and bee colonies. By doing so, they know the meat they sell is from animals that were completely grass-fed and raised humanely. Much of their meat is halal, which is widely regarded as the most humane way to produce and harvest meat.

“A lot of these places are where elders gather, drink tea, catch up on news from back home, exchange politics. It helps them navigate their lives.” - Rahmo Abdi, community organizer with Partnership for the Advancement of New Americans

Looking a bit like a young Jeff Goldblum, Al shows me the walk-in refrigerator where fresh carcasses hang. Some of the whole animals will be sold to local families celebrating sacred life events—births, baptisms, weddings, religious rites—and some will be bought by top chefs. “People buy this sheep just for the fat in the tail—they use it to flavor soup,” Al says. “This one is going to Juniper & Ivy.”

For chefs, local meat is the ideal—not only for quality, but also for the ethics of supporting local food people and systems (farmers, ranchers, fishers). But in San Diego it feels easier to find a yeti than local meat. Ranching in the county is hard for a number of reasons, like the scarcity and cost of land and water, and the lack of a USDA-approved slaughterhouse (the closest is in Corona, about 80 miles north of Poway).

Mid-East Market’s shelves are a riot of spices that are hard to find at the average American grocery store (bags of za’atar, ground shiro), favorite drinks adored by various cultures (the berry soda Vimto for Saudis, the salty-minty yogurt drink doogh for Afghans), even popular soaps and hair products (neem oil, blackseed oil) from other countries. They’re one of the only places that presses its own blackseed oil (revered by many cultures for its healing properties).

“I like the challenge of finding the ingredients any of our customers want, from dried fish to snails,” Al says. The clientele shifts depending on what’s happening in the world: He saw many Afghans during the war; now there are more Haitians, who’ve fled political instability at home. So the inventory of Mid-East Market tells a story about global politics, and local refuge.

As I load my groceries at the checkout (lamb chops and stew meat, a bottle of Vimto, housemade zhug, a container of their famous emulsified garlic), an older man is buying a bag of goat kidneys. Al asks him what he’s going to do with it. “I’m from Algeria,” he explains. “We take a tiny layer of meat, then fat, then meat again, and then we smoke it.”

He’s eager to talk, and share a recipe from where he’s from. This happens here, a lot. It’s a crossroads of cultural perspectives shared through food. It brings to mind what Rahmo Abdi told me about restaurants, and I can see how it applies here at the market as well.

“A lot of these places are where elders gather, drink tea, catch up on news from back home, exchange politics,” she said. “It helps them navigate their lives.”