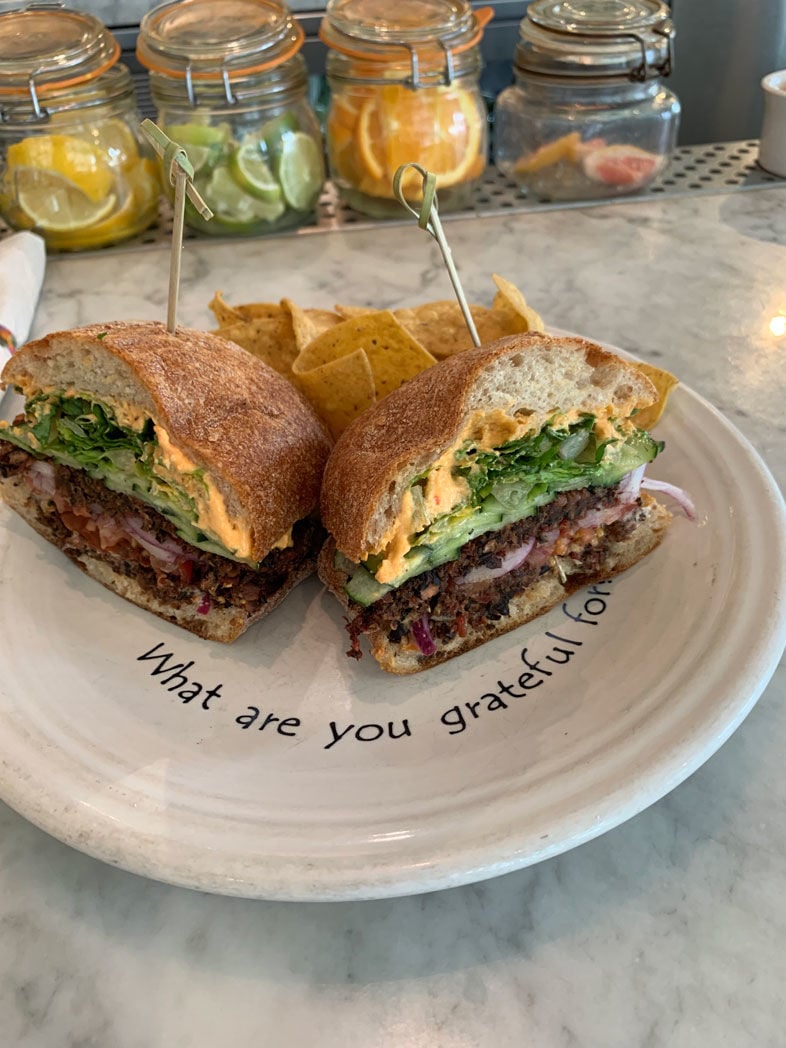 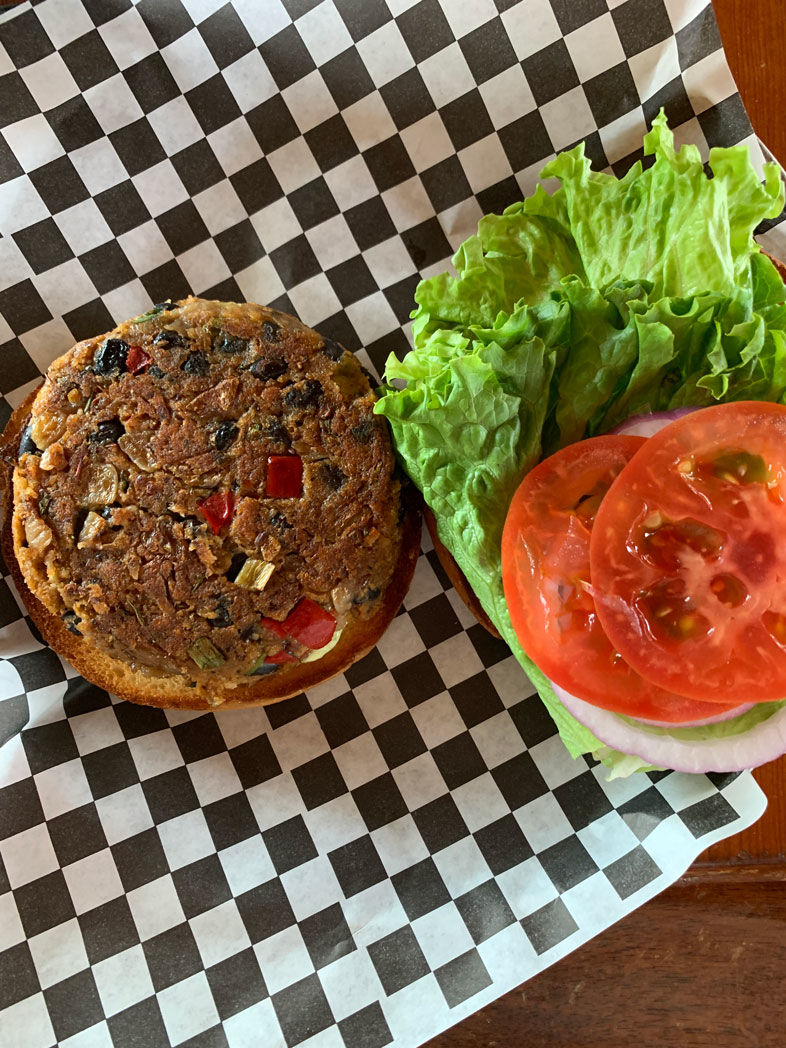 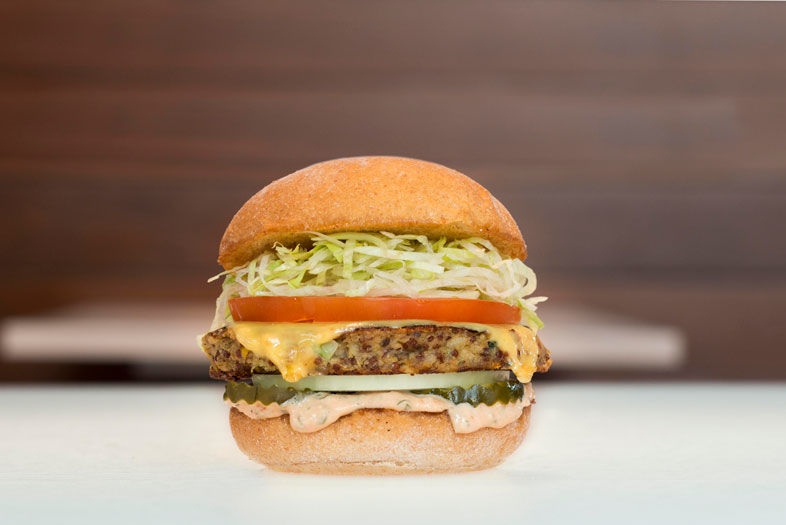 Last month, a company had the best-performing IPO in almost 20 years—valued at $1.5 billion. It was not a tech company. It was Beyond Meat, a vegetarian meat substitute that got its start with veggie burgers.

Veggie burgers are officially the hottest food in the U.S. Their early years were not applauded. Let’s face it. Sometimes problem children don’t figure it out. Sometimes we realize they weren’t going through a phase or stage, but rather a destiny.

The plant-conscious people who first tinkered with veggie burgers were not chefs. If they were, they were terrible ones. The early patties tasted like a hot salad drowning in some sort of bean tar.

That’s because real chefs treated vegetarian and vegan cooking as a fad. They refused to dabble in the chlorophyll arts. But that’s no longer the case. Whether for reasons dietary, environmental, or ethical—plant-based eating is way up, and a big part of food’s future. Famed Jean-George Vongerichten has his meatless restaurant ABCV in New York. It’s no longer a treat for a good chef to have good vegetarian dishes; it’s a must.

As a result, veggie burgers have gotten gooooood. Beyond Meat and its competitor, Impossible Foods, are the behemoths in the movement (Impossible’s investors include Bill Gates and Li Ka-shing, Asia’s third-richest person).

So it sent me on a hunt for the city’s best veggie burgers made the old-fashioned way—with beans and flax seeds and "meat spices." No Beyond or Impossible burgers allowed. At this point, the Impossible Burger is so excellent and freakishly meat-like, it’s an unfair competitive edge.

I have a few criteria specific to veggie burgers, based on past crimes: the patty can’t be dry. It can’t fall apart at a glance. And it can’t be too smeary (overworked beans become glue).

Here are the results…

Not even close. The clean, white temple of self-affirmation and plant-based nutrition in Little Italy wins this by a country mile. This depressed me a touch, since Café Gratitude is based in the Bay Area. I wanted a local to win this. But being honest is quite literally my job as a food critic—so I told myself to deal with it. The "Magical Burger" patty is sturdy and delicious, made of roasted beets and mushrooms (shiitakes, criminis), steel cut oats, quinoa, brown rice, black beans (pureed and whole), pumpkin seeds (cooked and raw), flax seeds, barbecue sauce, herbs and salt. The cheese is a spreadable cashew-macadamia cheddar, with tomato, cucumber, lettuce, and house-made chipotle ketchup on a brioche bun. It costs $17. For that price, it better be fantastic. And it is.

This was a shocker. Peace Pies is raw vegan food. That means uncooked. The burger arrives looking like a salad between crackers. It looks beautiful, vibrant, popping with the colors of highly nutritional, organic vegetables and seeds. For that same reason, it also looks awful. Instead of a bun, there are two thin, flat, grayish crackers made of flax seeds and sunflower seeds. Sprouts stick out this way and that, and in the middle is a patty made of sun-dried tomatoes and walnuts. I don’t want to bite this thing. I have flashbacks of the post-hippie ’80s, when neighborhood moms thought they could cook meatless and they were terribly wrong. They’d force us to eat a cuisine best suited for finches and waifish dogs. The "Bliss Burger" instantaneously proves me wrong. It is delicious. The patty tastes of traditional meat spices, and it holds together, topped with a slice of yellow cashew cheese. The flax-sunflower bun actually works perfectly with the ingredients, and holds together as well. There’s a delicious side of cashew ranch. Being uncooked and having birdseed instead of a big, glorious bun, it’s a pretty far stretch from what most people think of as "a burger."

The way to spot a vegetarian in Ocean Beach is to close your eyes and then open them. They’re everywhere. The counterculture set up camp here in the ’60s because no freeway had direct access to it (Interstate 8 didn’t reach it until 1972), making it a prime place to turn on, tune in, and drop out. They’ve got the only food co-op in San Diego (People’s), which refuses to sell meat. Even the local barbecue joint offers decent veggie burgers (not one, but two) and veggie wings. In other words, sad tofu patties don’t stand a chance in these streets. If your veggie burger can make it here, it can make it anywhere. And Royale’s does. It starts with a black bean and quinoa patty, using flaxseed meal and bread crumbs as a binder that holds it together perfectly. Tucked inside to season it are shallots, garlic, and balsamic vinegar. It has a nice crust like a smashed burger, and the inside avoids being overly dense despite the beans. They place it on a Sadie Rose whole wheat vegan bun (vegan baked goods are no longer underwhelming dry things for the niche crowd), a quick pickle slaw (julienned beets, carrots, cucumber, and jicama), and thinly sliced, tempura-fried eggplant for crunch and vegan mayonnaise flavored with Crystal Louisiana hot sauce and paprika.

South Park’s mainstay is probably my favorite place to hang out among all these joints. And their spicy black bean burger is really solid. Owner Sam Chammas is a longtime supporter of local music (he also owns Live Wire, Whistle Stop, and Krakatoa), and the little-known trivia is that this burger recipe was created by Jay Crane—aka JC 2000, trumpet player for one of San Diego’s favorite bands, Rocket from the Crypt. It’s a thick, substantial patty made of caramelized bell peppers and onions, cilantro, cayenne, green onions, garlic, cumin, salt, pepper, reduced chipotle peppers, ground fennel seed (as a binder), and panko bread crumbs. The cilantro lime sauce is also killer (simply lime, mayo, cilantro, garlic, salt and pepper). And it’s served on a brioche bun, which is basically butter masquerading as bread.

San Diego-based better-burger chain made their name with grass-fed burgers. But their quinoa veggie burger has been a local favorite for years. It wins "Best Fast Food Veggie Burger," for sure. The patty has organic red quinoa, organic brown rice, zucchini, mushrooms, onions, carrots, corn, garlic, jack cheese, panko breadcrumbs, parsley and chipotles in adobo. The chipotles really amp up the flavor and make it special, then the whole thing is seared in butter for a nice caramelized crust. The only problem with this burger is the consistency—it’s a bit mushy and falls apart. Has all the structural integrity of an amoeba. But tastes great.