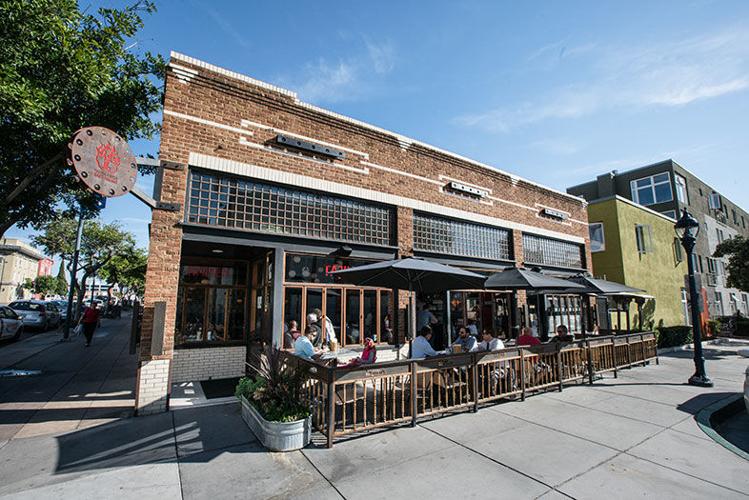 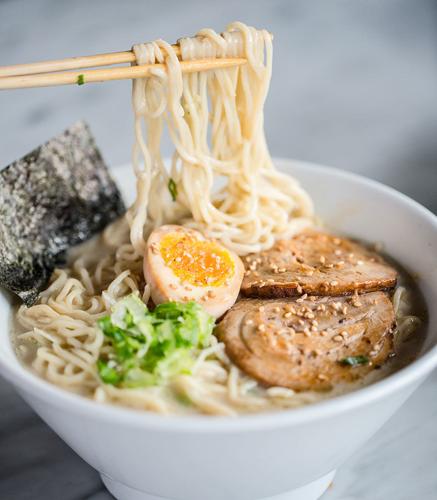 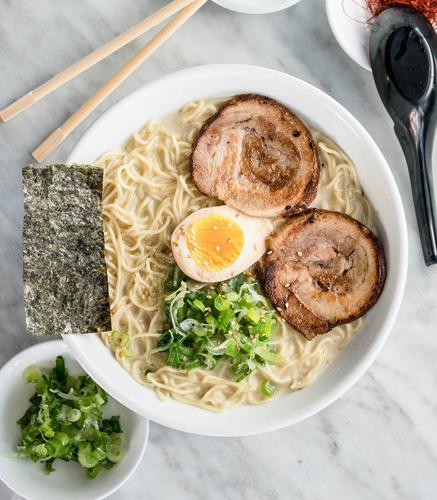 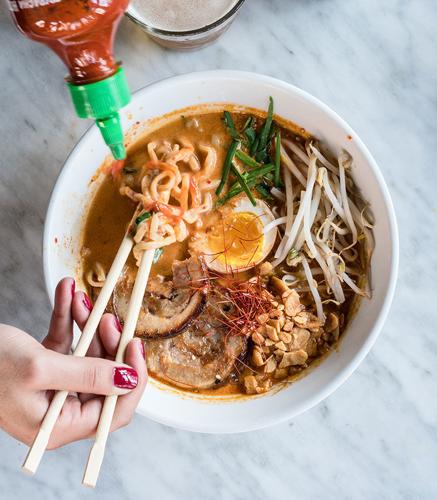 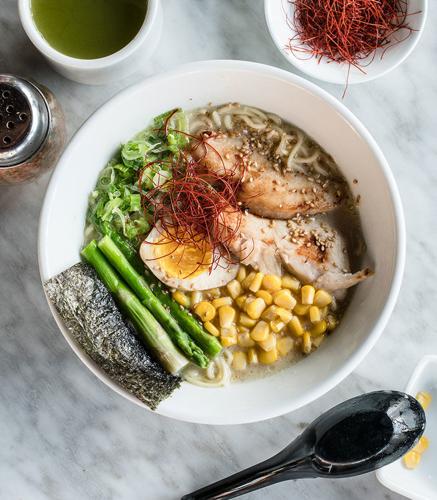 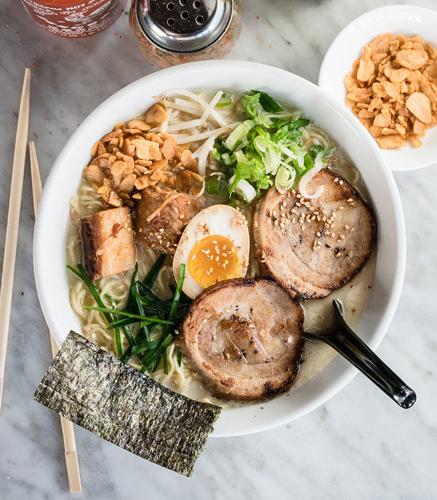 I was a latchkey kid in the 1980s. Women, including my mom, were back in the workplace trying to satiate the cash-hungry American dream. So if I wanted food between the end of school and dinner, I had few options. I could make a sandwich, boil Top Ramen, or wither and moan.

Invented by Momofuku Ando and his company, Nissin, in 1958, instant ramen was first introduced to America in 1973. It was foolproof. Boil water, dump in noodles, stir in flavor packet, eat. It was like Kraft Mac & Cheese from the Far East. A satisfying hot meal that could be made by people whose brains weren’t yet fully developed. It had less nutrition than the package it came in, but it was a hot meal nonetheless.

So ramen fed America’s entire latchkey generation. And now that gen is grown up. Makes sense, then, that sophisticated ramen joints are taking over San Diego—because food trends follow our memories.

A country that grew up with dads grilling in backyards gives birth to the "better burger" movement. Culinary Institute of America grads reinterpret the boxed mac ’n’ cheese of their youth by adding lobster and Gruyère. Tater tots become gastropub catnip. And the Cup Noodles and "chicken-flavored Nissin" generation gets their jollies with these ramen joints.

Arguably the best in town for a while has been Tajima, a Convoy Street mainstay. And now it’s expanding, with a second location nearby and more in Hillcrest, North Park, and downtown.

It’s the downtown spot, on the corner of Ninth and E Street in the East Village, that interests me the most. "Expanding into downtown" still represents serious effort for any small restaurant enterprise, a signifier that an outskirt is making a deliberate push into the diversified heart of a city culture. In Tajima’s case, downtown is so far removed from the abundant Asian population of Convoy that it may as well be Mars.

The fact that it’s packed for lunch on a Monday proves ramen is no longer an Asian specialty in San Diego. Fellow ramen house Underbelly proved as much when it opened in Little Italy and North Park a few years ago.

Tajima’s location isn’t ideal, so I suspect they got a good deal on it. It was last inhabited by Acme Southern Kitchen, a rare unsuccessful concept from SD restaurateur Terryl Gavre (Cafe 222, Bankers Hill, Market). It’s four blocks too east from the Gaslamp, two blocks too north from Market Street. Possibly the hardest part of the location—talked about only in whispers—is the homeless encampment across the street from the patio seating. To eat on the patio is to get a heart-tugging view of how hard life is.

When talking ramen, the question of authenticity is moot. Ramen, after all, first came to Japan from China in the late 19th century in the form of laa-mien, handmade noodles in a light chicken broth. Around the turn of the 20th century, industrialization drew Japanese people out of the countryside and into the cities. Ramen, sold cheaply by Tokyo pushcart vendors, became a speedy source of calories for the urban workforce.

After World War II, the U.S. occupied Japan. According to George Solt’s The Untold History of Ramen, the country was hungry, and postwar food shortages meant that wheat for the noodles wasn’t available. The hungrier locals got, the more they migrated toward communism. That scared the hell out of the U.S. government, so they imported their wheat to Japan. Japanese ramen, made with American wheat, helped win the Cold War.

Most Americans don’t realize this. They just like warm noodles in a salty broth that reminds them of their packaged-food childhood. But the passion of Japanese immigrants is infectious, and fuels ramen’s current mini-mania in the states.

Ramen is pretty simple. The noodles are made of wheat flour, eggs, and kansui (alkalinized mineral water, usually enriched with baking soda, which gives them their bite and yellowish hue). There are three main broths: shoyu (soy sauce), miso, and tonkotsu (pork).

Though Tajima has a reasonably diverse menu, make no mistake—come here for the ramen. They do tonkotsu especially well. Their "Tajima" ramen is thick with roasted pork-bone flavor, with fried garlic, bean sprouts, half a ramen egg (a soft-boiled egg usually marinated in sake, soy, mirin, sugar, and water), pork chashu (marinated pork belly), sesame seeds, and thin strands of dried seaweed. The pork is juicy, yet with texture on the edges, tasting lightly of soy and garlic with ribbons of fat. Our only gripe is the egg, which ideally should be soft-boiled and slightly runny. Ours is hard-boiled.

If you like heat, the spicy sesame ramen is our favorite, made with sesame paste for a rich flavor and spicy ground pork for a pop and a red hue.

I had tasted Tajima’s vegan ramen months ago, and it needed work. Contrary to rumors, vegans like flavor, too. But it has improved dramatically, made with a veggie soy broth and spinach noodles with corn, asparagus, green beans, kaiware (peppery radish sprouts), deep-fried tofu, shredded red pepper, and black garlic oil.

The only disappointment is the creamy chicken ramen. The broth is somewhere between creamed corn and chicken noodle soup, but the chicken itself has been marinated into a spongy texture. It also has an off-putting fishy essence. It’d surprise me if they were using fish sauce on a dish whose title brags of chicken, but it sure tastes like it.

From the appetizers, try the chicken karaage (tangy fried chicken marinated in soy sauce and dredged in potato starch), served with Japanese mayo spackled in togarashi (spice rub). The pork belly kakuni bun is also excellent, a pillowy steamed bun hugging succulent pork belly, mixed greens, and kaiware. At $5, the pork chashu bowl is also worth the price, because the marinade meat is addictive, even if there isn’t much of it (but, again, it’s $5).

I wish Tajima would give the same love and attention to their side dishes that they do their signature dish. Our kimchi fried rice is soggy, with none of the wonderfully browned, caramelized, crispy rice that makes fried rice a texture delight. The takoyaki (octopus fritters) are covered in both mayo and brown sauce; since the interior of the fritters is already creamy, the whole affair feels flabby. Their edamame comes to our table without salt at all. They’d do well to apply kosher flakes with abandon.

Service here is friendly, if a tad aloof and slow. On both visits, we wait between five and 10 minutes before a server hits our table. But something special happens at the end of your meal, in the form of the check. This place is cheap, possibly underpriced, even for a ramen house. We order three bowls of ramen and five side dishes, and our total is $57.

Price gouging is an honored pastime for downtown restaurants, but Tajima apparently wants no part of it. It’s a small, modern hangout on an uncelebrated corner with excellent tonkotsu ramen. A place you can get a hot, filling bowl of noodles, sake and/or a craft beer, and a hip restaurant experience for pennies on the dollar. You can rekindle those memory embers of instant ramen, or make new ones. There may not be a better bowl in town.