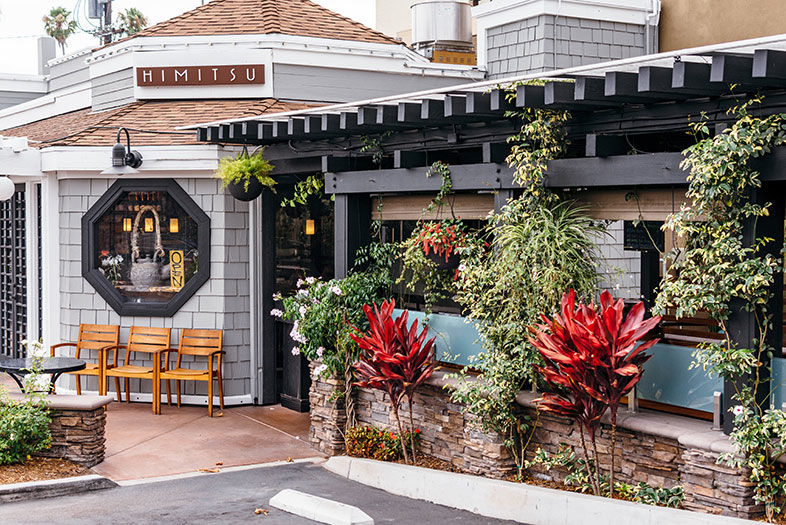 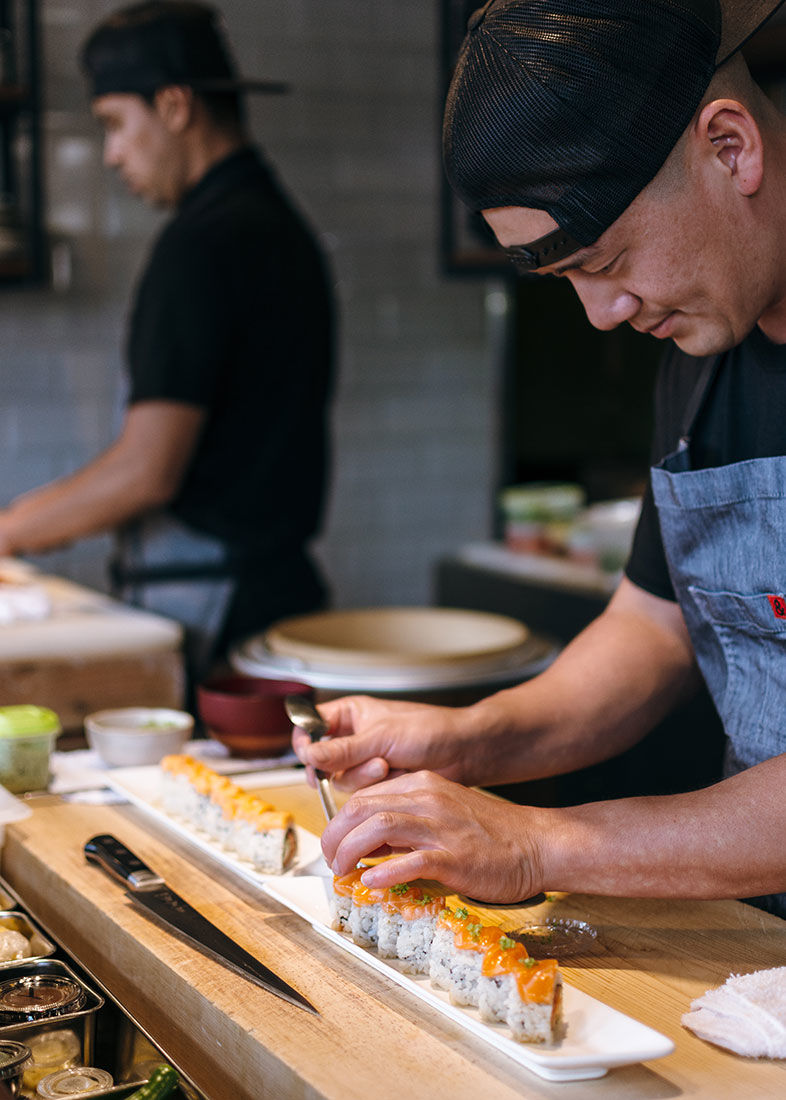 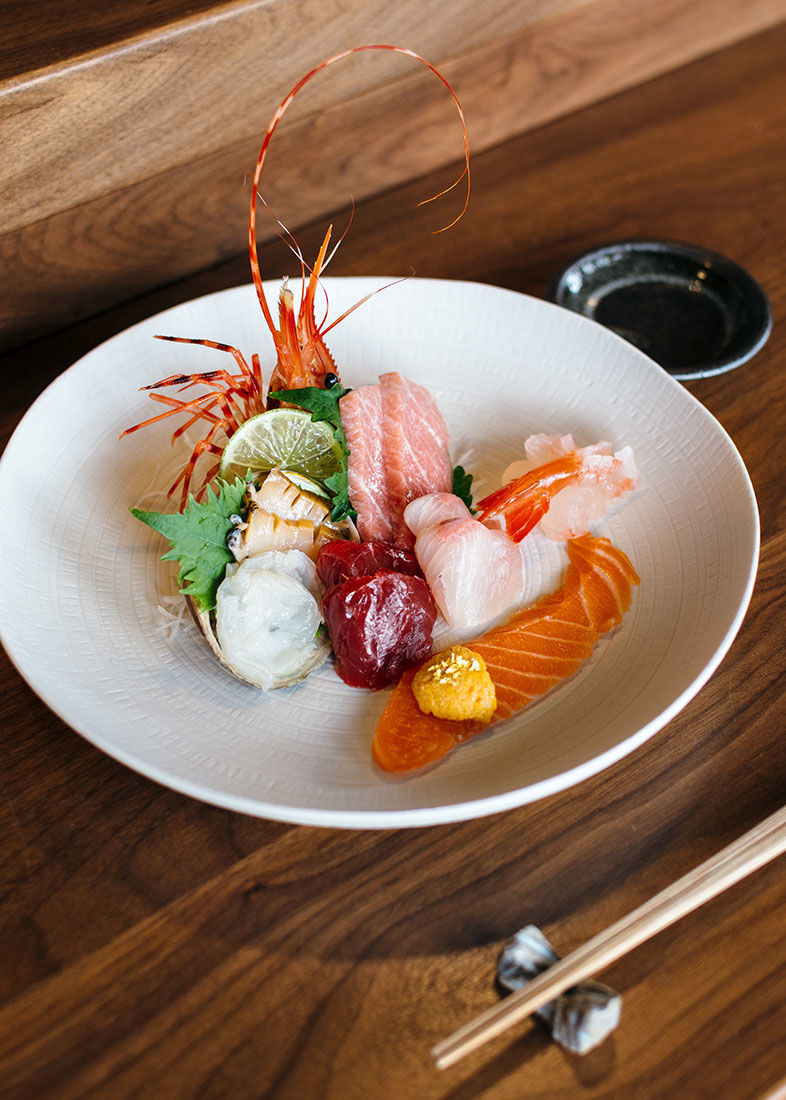 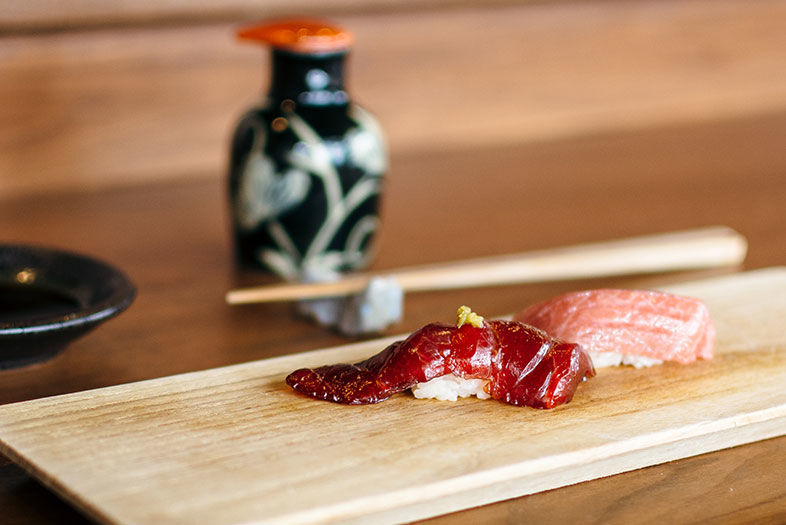 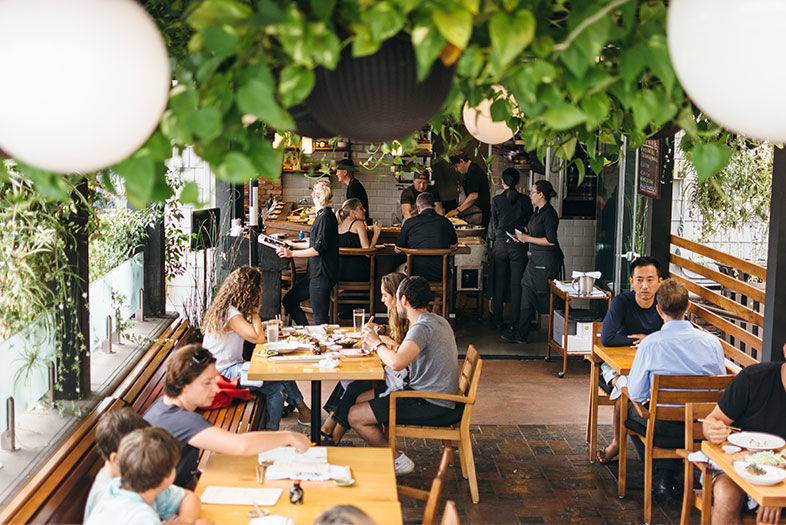 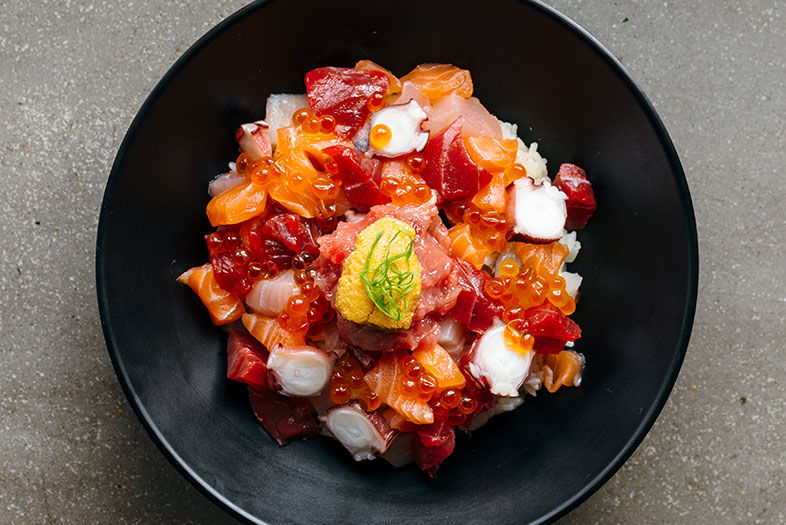 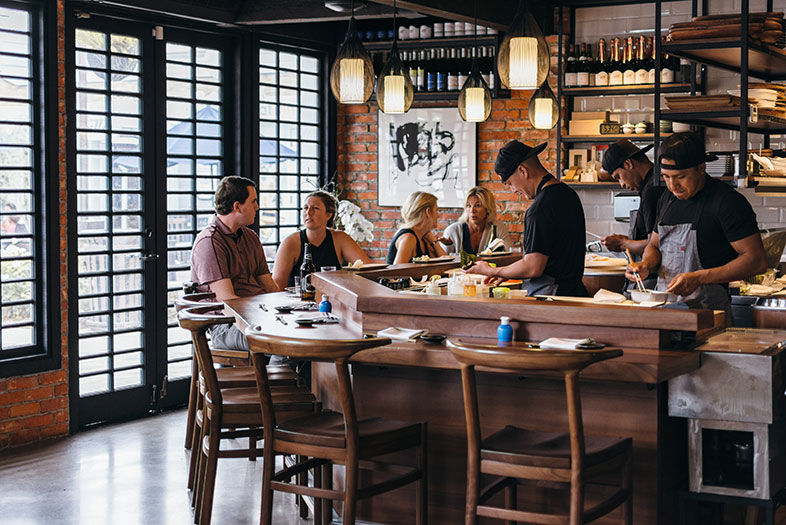 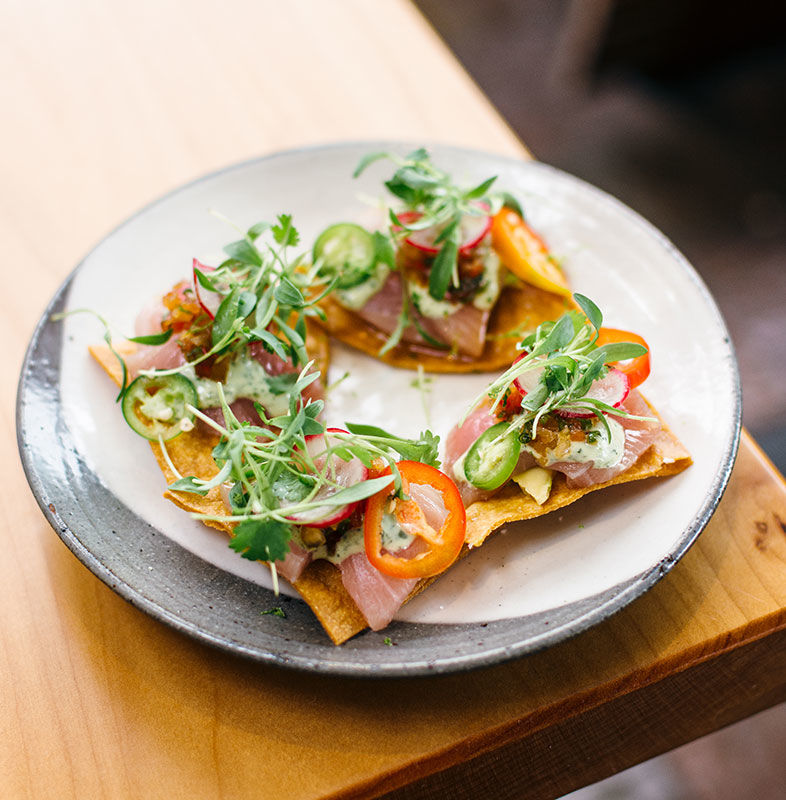 Their hands work with a music conductor’s delicate, concussive rhythm. Or like a craps player romancing the dice before a crucial roll. The same exact motion, over and over and over. Each time, they open their fists to reveal perfect nigiri. Repetition breeds an artfulness to anything, and artful repetition is how sushi went from a Tokyo street food to an upscale dinner show.

It’s a simple thing, rice and fish. And yet so simple to mess up. At half-assed sushi joints, you can smell that low-tide musk. The sashimi appears to be cut with garden shears. The rice isn’t cooked right, or formed correctly, and halfway between the plate and your mouth, it air-drops with a splat. Too much mirin, and it’s puckery. Too much sugar, and it’s fish dessert. Piece after piece after piece, Himitsu nails it.

Sushi Ota opened in 1990 in an unsexy Pacific Beach strip mall. (With a 7-Eleven and dentist, that mall offered America’s problems and its solutions.) As American sushi did its best ’80s country music impression—ditching understated craft for overstated glitz—Ota remained true to the old art, where time and devotion are the most important kitchen tools.

For nearly two decades, his restaurant has been the training ground for the next generation of San Diego itamaes, who learn to honor the sourcing, the gutting, the cleaning, the cooking, the cupping, the shaking, the molding, the plating, and the conversation of the omakase. All those enormous tiny details. And now his protégés—first Roger Nakamura at Hane, then Roger’s brother Robert at Shino Sushi in Little Italy, and now Mitsu Aihara here at Himitsu—are finally spinning off on their own. Sure, you’ll find more playful, modern techniques from this younger generation. But Ota ethics and rituals are sewn into them.

"How long can it take to learn how to cut fish?" people often ask.

Long. In Japan, it usually takes 10 years to become a true itamae. Jiro’s dream was a protracted one.

Knife skill is only one of the vital techniques. It’s the fun one diners get to see, so they assume, "Hey, zip, that’s it, easy peasy." But to master sushi, an apprentice often spends the first couple years learning how to spot the freshest fish (moist flesh, bright eyes and gills, should smell like high tide—not low tide). Local fishermen give Ota and his team first pick of every day’s catch. If they dock before Ota arrives, other potential buyers are told to wait. It makes sense that same courtesy is extended to protégés, which might partially explain the excellent quality at Himitsu.

Their Spanish mackerel, an oily sucker that can taste like it fell behind the couch for a few days, is mild and lovely. "We found a mackerel that swims at medium depth," explains Aihara of its clean flavor. San Diego has world-class uni, but they’re not currently serving it—"Water’s too warm and we don’t like the taste, so we’re getting it from Korea until it’s better," he says. Warm water makes female urchins spawn, which makes their meat slimy and bitter. And this San Diego summer was hell. It’s quality first, provenance second at Himitsu. That’s why their uni lives up to its reputation as the foie gras of the sea.

Before they’re permitted to cut fish, apprentices spend icky, bloody months perfecting the gut-and-clean (cut incorrectly, bloodlines result in "fishy" fish). They work over and over on their knife skills, often practicing on garlic, learning to cut it to 1/16th of an inch. You can see the surgical skills in Himitsu’s seasonal soft-shell crab, served in a broth with peppers diced in perfect, millimeter-thin cubes that infuse each bite. I didn’t know you could cut food that small. Bet their knives could cut beer cans in infomercials.

Then they learn to cook rice, whose fluffiness and sweet/sour balance is essential (the word "sushi" translates to "seasoned rice," after all, not "cut fish")—and Himitsu’s is fluffy, not too sweet. Half of it doesn’t give up on the way to your mouth and go splat.

Finally, they work alongside the master at the counter for years, learning how to assemble nigiri and maki rolls with a fluid combo of speed and grace—which is the cup, shake, squeeze, release hand jive Aihara and his team perform at the sushi bar. The grace is especially important, since itamaes are your friends, whether they want to be or not. There are few spaces in the restaurant world as intimate and face-to-face as a sushi bar. So, from their traditional "Irasshaimase!" greeting to weather commentary and explanations of each piece of fish and sauce, the art of chat is essential. Aihara and his team elegantly crank out nigiri while asking about your kids and keeping all their fingers.

The omakase is the ultimate sushi experience, which means you put your meal in their hands. The itamaes select the best fish they’ve got and prepare it in front of you, serving two to four pieces at a time until you politely surrender. Himitsu’s omakase bar seating is handsome, dark-stained wood forming a semicircle around Aihara and his cohorts.

My omakase starts with a duo of snow crab and halibut in sweet vinegar. Two slices of daikon radish, thin as Bible pages, rest against it. It’s a clean, delicate handshake of a bite, with no need for soy. The next plate is bonkers, a real Noah’s Ark of raw seafood: salmon, sweet shrimp (amaebi), Spanish mackerel, amberjack, toro, and uni tongue. The head of the shrimp is served, its eyes still moving and spindly legs still spindling, reaching for its shrimp god, heebing and jeebing a few nearby diners. Sweet shrimp is one of the only shrimp you can eat raw, and its juicy flavor pops with still-electric life. Then Aihara serves tuna two ways, one rested for five minutes in a soy marinade until it has a deep, lacquered appearance and salty-sweet flavor, and the other fresh otoro (the belly cut, the fattiest and most delicious). Amberjack (kampachi) is my favorite sashimi, and Himitsu’s doesn’t disappoint.

With each piece of sashimi and nigiri, Aihara gives instructions.

That last parcel of wisdom he shared in an effort to save my life. Sushi has been a part of my monthly ritual for decades. I’ve studied its customs and terms, read multiple books on it, made plenty at home. I know the Japanese word for almost every fish and proper chopstick etiquette (never plant them in your food like flagpoles). But it’s been ages since I’ve had amaebi. I know I’m supposed to eat the whole shrimp, head and all, but I have a nagging feeling there’s a step I’m forgetting.

I panic. I eat the raw tail.

It’s a treat—like cutting up a credit card and eating the shards. I instantly remember I’ve done this wrong. I’m supposed to only eat the head, and even then wait for it to be deep fried. One of Aihara’s chefs sees this, his eyes bulge with WHAT THE—, and he informs his itamae that some idiot has eaten the raw tail. Aihara watches me to make sure I don’t try to stuff the still-wiggling head and legs into my wild, stupid, animal mouth. I do not. I sit there, the alchemy of soy sauce and shame lingering on my road-rashed palate. A server takes the head back to the kitchen and deep fries it. I eat it all, and it tastes like a cross between a shrimp boil and potato chips, warm and salty and more delicious than it is unsettling to eat a creature’s face.

Lunch at Himitsu could use a sprucing, even if its shaded, plant-laden patio is an afternoon oasis. We try three of their donburis (bowls of sashimi over rice): the Himitsu (yellowtail, jalapeño, lemon juice, avocado, micro-cilantro, seaweed, and sesame seed), the Treasure Bowl (toro, tuna, yellowtail, salmon, octopus, albacore, white fish, uni, salmon eggs, and gold flakes), and the Tuna Bowl (toro, tuna, spicy tuna, and chopped toro with green onion, jalapeño, daikon radish, shiso leaf, sesame seeds, and seaweed). Really, it’s just generous piles of unseasoned, high-quality fish. The only seasoning are the minimal herbs, the lightly sweet vinegar of the rice, and the aqua-saline of the kelp, with soy sauce for dipping.

This is where tradition gets in Himitsu’s way, much like it does for Old World wines (Europe’s strict rules blocked innovation, whereas American wines had very few rules and experimented until they won taste tests over French classics). If an omakase features various sauces, why shouldn’t the donburi? The intense, brackish flavor of soy gets abusive pretty quick. Himitsu has all kinds of sauces—ponzu, yuzu, sakura, cilantro. Serve the bowls with a few of those. Or all of them. Tease the breadth of flavor available at the sushi bar, and make each bite different.

Aside from the excellent sashimi and nigiri, one of the best things we eat is the wasabi Caesar salad. Doesn’t look like much. Just a bunch of lettuce under a snowstorm of cheese. But that dressing is a sublimely light and garlicky song, with a gentle wasabi zing as backing vocal. The hamachi tostadas are served on freshly fried chips, with cilantro sauce, red jalapeño, serrano, lime zest, and sea salt. It’s a delicious sushi nacho, although a too-thick slice of serrano is hurtful. The hamachi kama (grilled yellowtail collar) is a tad overcooked and underseasoned. But their soft-shell crab, served fried in a shallow pool of ponzu, is everything a dish could be—crispy, tender meat, deep umami in the sauce.

Every meal has quibbles. But Aihara and his staff at Himitsu largely live up to the pedigree. It’s sushi done his own way, and the way Ota dreamt it.