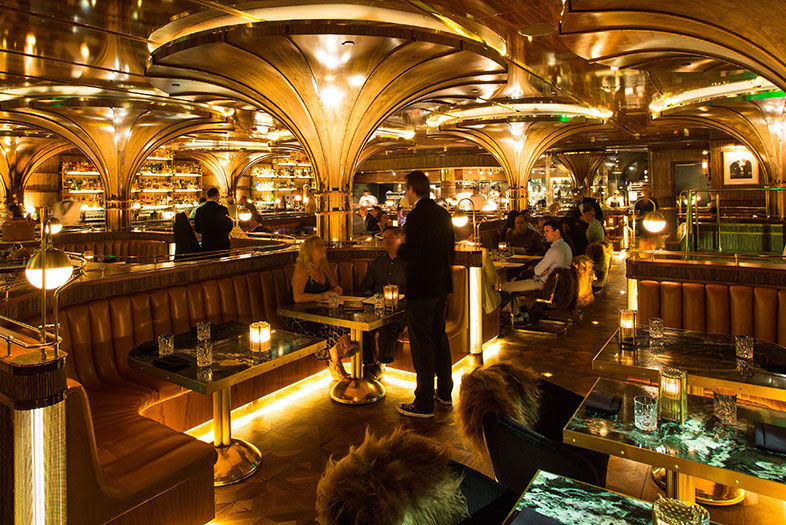 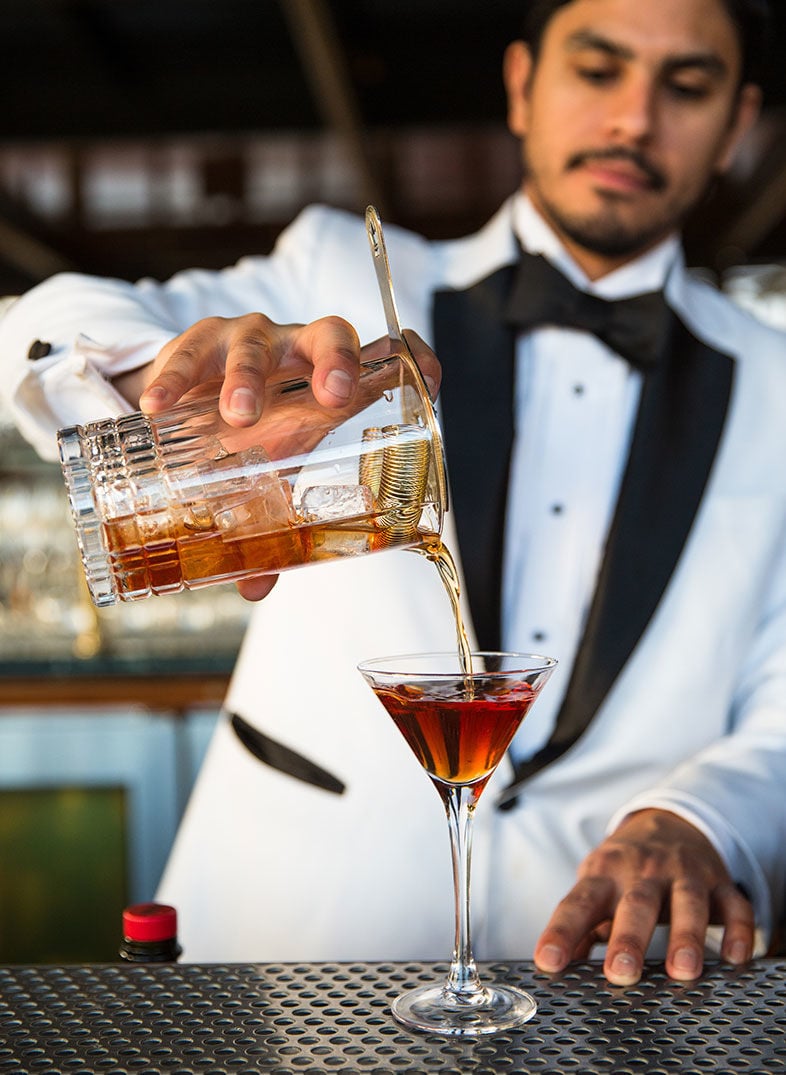 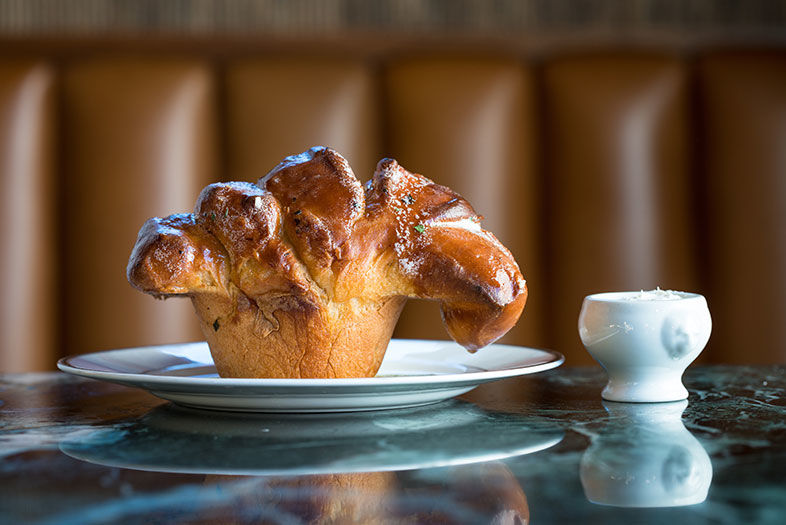 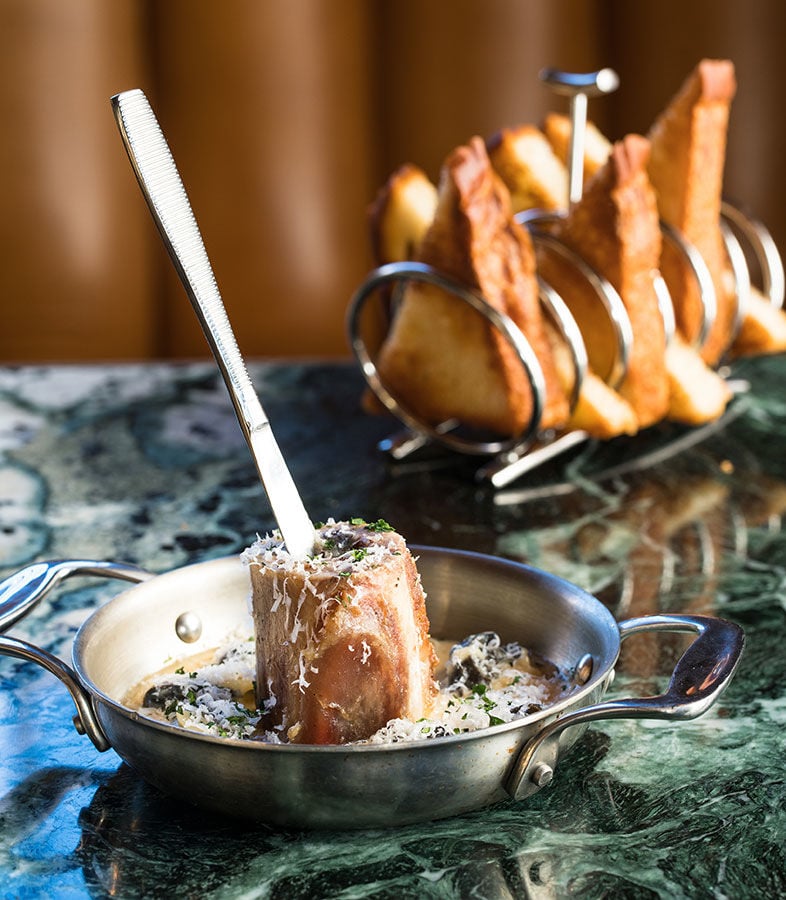 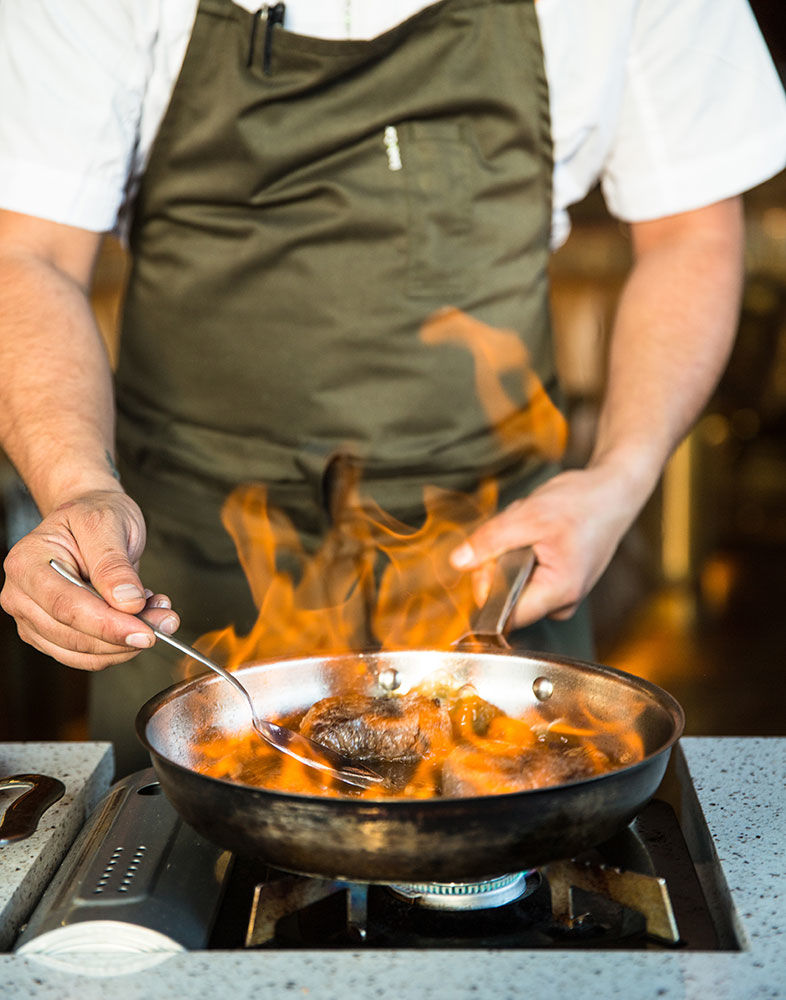 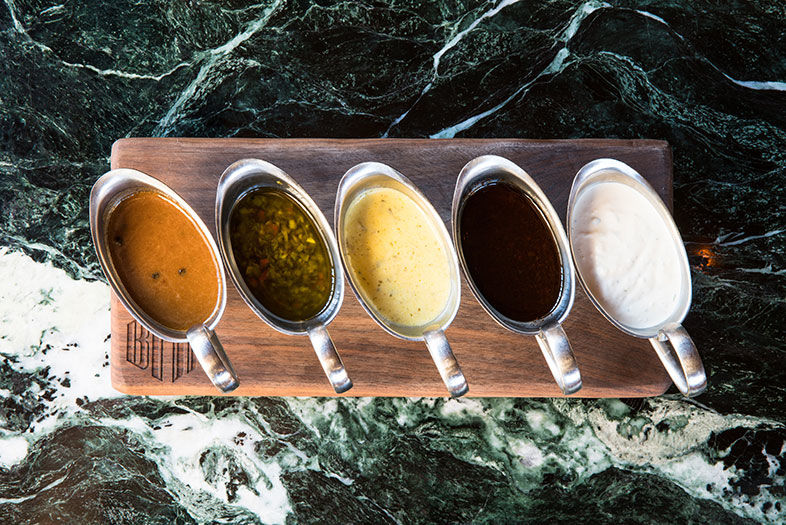 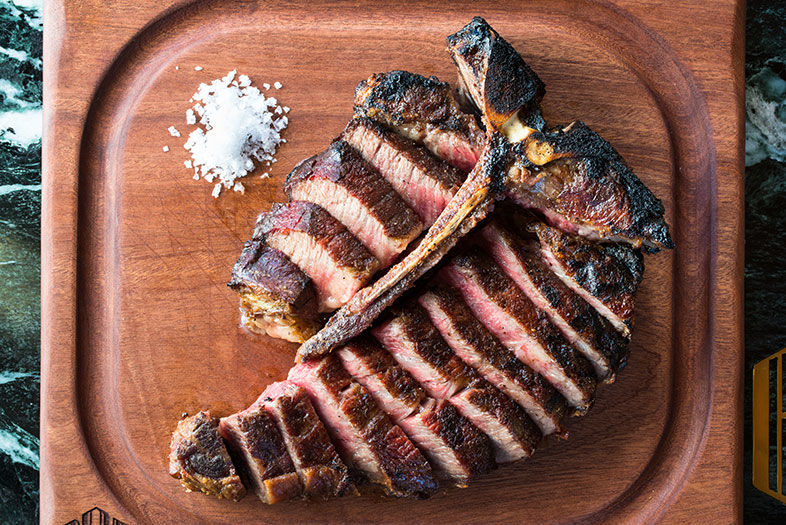 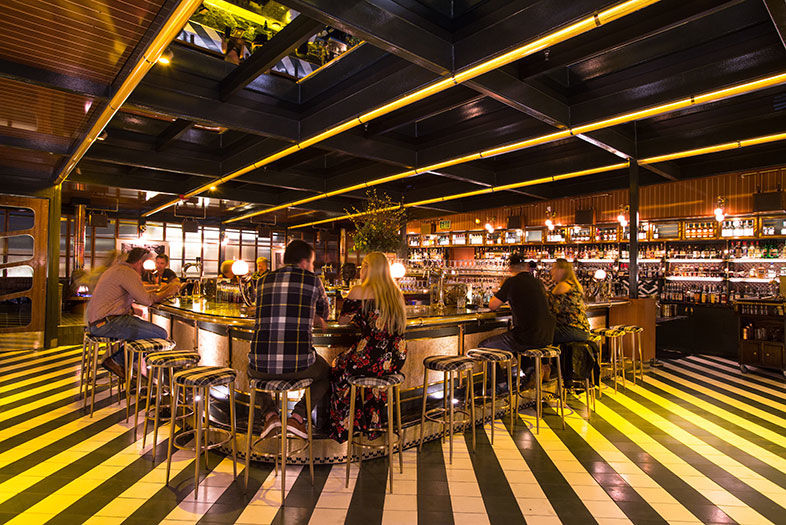 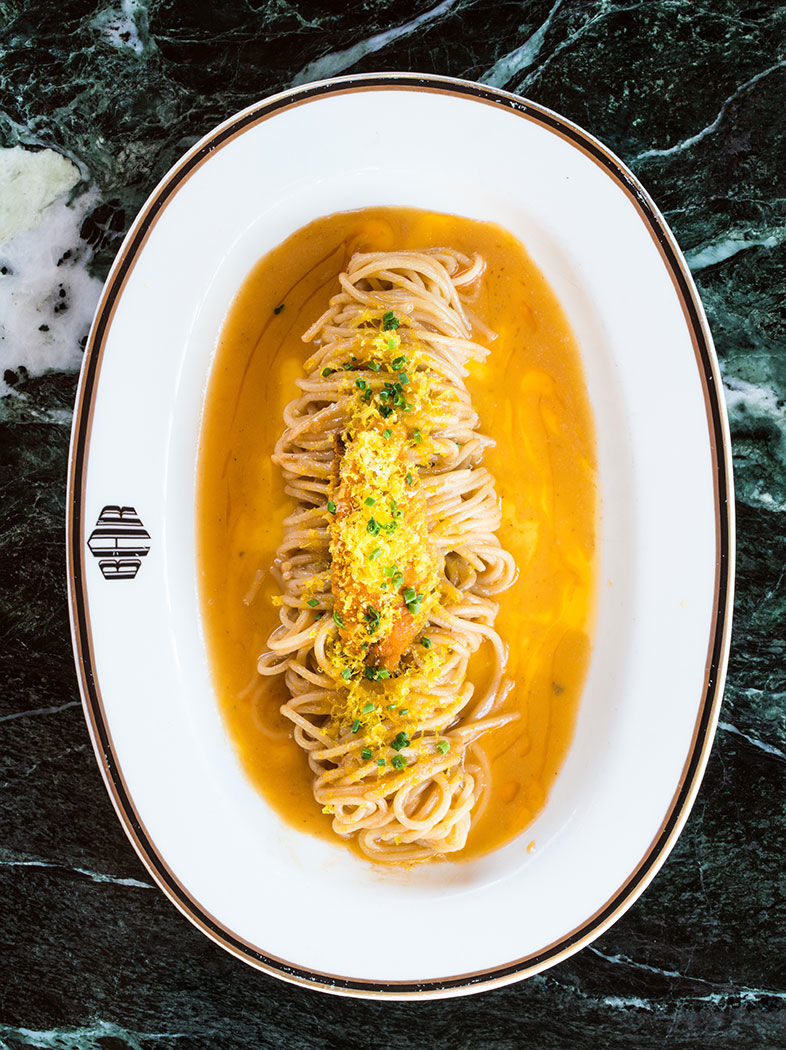 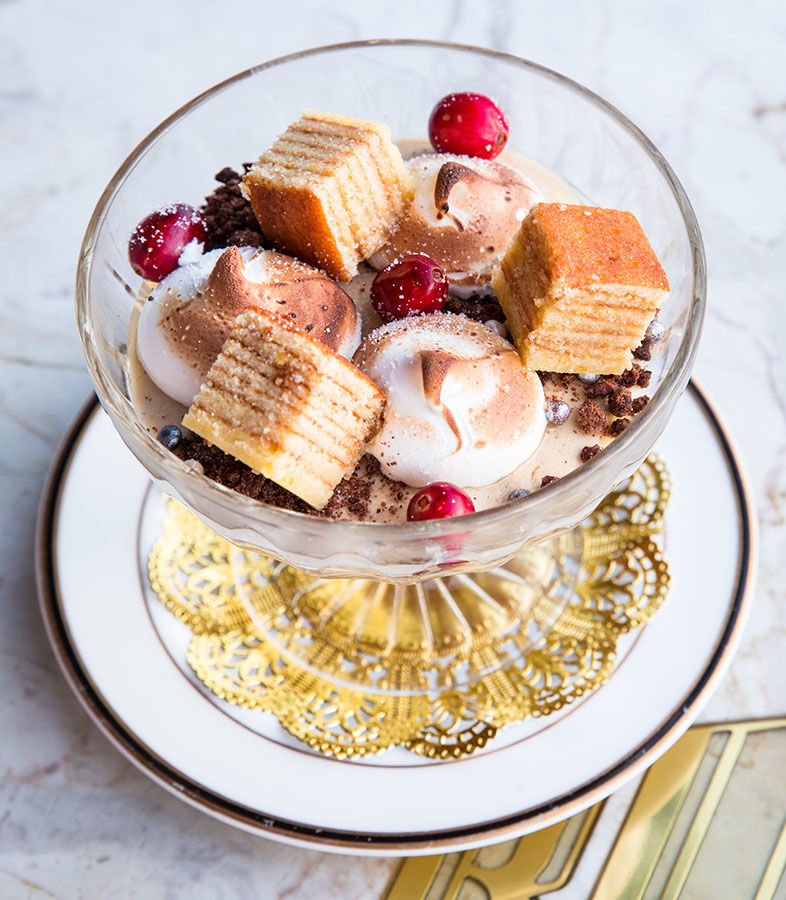 Opening a steakhouse these days is pretty risky. Opening one in a salad-friendly demographic like Southern California seems closer to boneheaded. Designing an elaborate, world-class steakhouse that costs $6.5 million borders on artful seppuku.

Beef consumption in America dropped 19 percent from 2005 to 2014. A full six percent of Americans now claim to be vegetarian. Google searches for the word "vegan" are way up. The biggest restaurant news last year? The closures of designer burger chains and the opening of plant-based fast food operations. Plus, beef is expensive. Most chefs and restaurateurs serve steaks as loss leaders, and only make real money when we buy foods with higher profit margins (pastas, pizzas). Also, have you ever heard that profit margins in restaurants are notoriously thin? It’s true.

So when San Diego’s hottest restaurant group, Consortium Holdings, announced they were designing a world-class steakhouse, the collective response from industry experts was, to put it in modern parlance, "WTF?"

But look at Consortium’s history, and this shouldn’t be a surprise. When downtown was full of appletinis and Coors Light, they opened Neighborhood, serving only craft beers. People said they’d fail. It’s still going strong. At a time when vodka made up 55 percent of drink orders in America, they chose not to serve it at their cocktail bar, Craft & Commerce. Another runaway hit.

And now, with minimum wage a big restaurant problem, every restaurateur is trying to go "gourmet fast-casual." So Consortium revolts against the Chipotle-fication of American restaurants and opens Born & Raised, with servers in tuxes, tableside dish and drink presentations, and expensive wines. They’re encouraging diners to sit and stay. It would seem that Consortium specializes not in restaurants or bars, but in risk. The status quo makes them itchy. Running with the pack hurts their legs.

All that aside, Born & Raised is one hell of a gorgeous steakhouse. Worthy of national attention and fancy New York headlines. F. Scott Fitzgerald is stirring a gin rickey in his grave.

Enter through the bronze and glass doors by way of the "B" handle or, if you prefer, the "R." Inside, the main dining room has that supple amber glow. That hue is essentially fabric softener for your face; it makes everyone in the room Photoshop-pretty. The cheapest shoes are worn by the staff: Converse to anchor the tux. It’s hipster formal. The building’s columns "bloom," rising up like martini glasses made of rich walnut wood, greeting the ceiling with their giant, gently illuminated rims. The bar is Italian marble the color of kalamata olives and Rolexes. Booths are tufted, because tufting is refined. Some sort of animal fur is laid on the chair backs—camel or alpaca or some other beast that had ample to spare.

Gaze into the open kitchen and you can see their grand idea—various meats hung like carnivore laundry. Very few steakhouses age their own meat in-house. B&R does it all—bone-in New York, bone-in rib eye, tomahawks, porterhouses, duck, lamb, even meatballs. Why the hell would you dry-age a meatball? I try it, served over creamy polenta, ricotta, and tomato sauce. It’s very good. Everyone, please start dry-aging your meatballs.

Consortium loves honoring tradition as well as poking it in the eye. That’s why, as you climb the stairs (and you will; that’s where the bathrooms are), you’re greeted not by the classic steakhouse oil painting of a distinguished old dirty gentleman. You’re greeted by a large photographic portrait of rapper Ol’ Dirty Bastard, distinguished as he is on the couch in his "crib," shirtless and induced to a state of delirium by the 40-ounce in his hand. His boxers are visible (they’re striped), and his floor is decorated with either cigarette or spliff ashes, plus more malt beverage empties. "Welcome to Born & Raised," says Bastard. "It’s a grand party. Loosen up."

Upstairs is a central, partially covered bar, with more booths lining the deck that looks out over Consortium’s kingdom: Little Italy. Bathrooms are painted in an opulent swirl pattern, like a bowling ball or child’s marble.

The show at Born & Raised, though, is the tableside service. Tableside presentations are a lost art form. In the days before open kitchens and Benihana, restaurants brought miniature versions of their kitchens to you on wheels. They wowed you by setting alcohol (usually brandy) in a dish on fire. It was fine dining’s circus act. It fell out of favor because, well, labor isn’t cheap. Neither are tableside carts. Plus, this sort of action elongates the dining experience. And with food, rent, and labor costs skyrocketing, restaurants need to "turn tables" to survive. Slow and show is out, ply and bye is in.

We order drinks made tableside—martinis and a Rob Roy, made with Japanese whiskey. Both are excellent (Consortium has always won with drinks), and the show is antiquatedly enjoyable, but if life has put you in urgent need of libations, just order from the bar. Our classic Caesar salad is also mixed tableside, while the server explains its origins in Tijuana. It’s a near-perfect salad, whole leaves of romaine in just enough garlicky, creamy sauce with the right under-note of anchovies. And the house-made croutons are what bread dreams of becoming. Finally, I order the classic steak Diane tableside, and it struggles. The fire gets away from our appointed cook, maybe in the pursuit of performance. The resulting sauce tastes over-reduced, nearly burnt. And since filet mignon has almost no flavor (due to lack of fat), the sauce is essential to bring it glimpses of glory.

Our service over both nights ranges. This is the hottest restaurant in town, and they’re attending to a flood of carnivores. On one night we have to flag someone down for help. On the other, everything is perfect, with excessive staff present looking over every table, perched for assistance. It should be noted that a very well-respected businessman told me that he and his wife waited 30 full minutes to get their first drink of the night. There will be issues, but they seem to have overstaffed accordingly, and everyone is intimately knowledgeable about the menu.

The meat program, as expected, is excellent. Chef Jason McLeod, who earned two Michelin stars during his time at Ria in Chicago and who studied under Marco Pierre White, is a stickler for basic, fundamentally good cooking. His chefs don’t get to do fancy foams until they learn how to do a basic sear, over and over. Order a "flight of sauces," because there’s some magic in those, especially the garlicky peppercorn sauce and the béarnaise.

The most remarkable cut of meat, however, is the pork chop. Restaurant pork chops are a dangerous prospect since they’re so easy to dry out. But McLeod’s is one of the best I’ve tasted, juicy and intensely porky thanks to the aging process. It doesn’t even need a sauce. The chicken is nice, average. If you’re ordering chicken, you’ve clearly misunderstood the reason you’re here.

A steakhouse’s mission is twofold. First, source great cuts and treat them with respect. Born & Raised does. Second, create delicious sides. This is where the restaurant has some genius and some failure. For the genius, look to the bread. It’s not free. Get over it. Because this bread is the apex of grain, a buttery hybrid somewhere between a brioche and Parker House roll, served with soft house-made butter flecked with sea salt. Also, those Mary’s Snails. Yes, I realize what they are. Icky garden dwellers. Anyone who’s stepped on one barefoot is deeply scarred, as I am. But again, get over it. Anticipating your apprehension, Born & Raised doesn’t serve them in the traditional tray with the holes. They are served bathing in an absolutely delicious butter, garlic, and cream sauce, around a centerpiece of bone marrow with accompanying toast. Finally, the spaghetti in an uni sauce—San Diego’s specialty—plus chili and lemon. It’s an odd order at a steakhouse, but a great one. The baked mac ’n’ cheese with cheddar and Gruyère also ups the game of the childhood classic.

The misses are plenty, however. Like the smoky creamed kale. I realize kale is trending, but kale has a bitterness that, especially when smoked, is too much for the cream to overcome. Boring ole silky spinach would be better. The king oyster mushrooms are too large, and the sauce simply can’t cover the acreage with enough flavor. The charred broccoli is okay. I know the kitchen enjoys playing with fire, but the char is a tad much, solvable only with a generous digging into the bagna càuda (garlic, olive oil, anchovies, and butter) below. As for the Robuchon potatoes, it’s a personal thing. I have reverence for the French master chef, and have yet to taste this famous recipe from his own hand. But every time I’ve ordered them, anywhere, I’ve been disappointed. The recipe basically calls for potatoes, butter, and cream. And there is never enough cream, nor flavor, in them. While we should respect the classics, have we not elevated the potato arts? Maybe some thyme oil, or garlic, or … anything. Our whole table is underwhelmed.

I expected the desserts to be an afterthought. And I was right with the carrot cake. It’s a massive thud of a dessert, layered to infinity with spicy cake and cream-cheesy frosting. But ours is served fridge-cold, dangerously close to frozen. Senior Editor Archana Ram experienced the same, though she said it was delicious later at home when allowed to come to room temp. Cake should always be room temp. Flavors open up, and the texture softens. No excuse for cold brick cake. But the chocolate verrine gets the table moaning: 70-percent dark chocolate with coffee marshmallow, cacao nib crumble, marzipan cake, and sugared cranberry. It’s sweet, tart, crispy, silky, moussey, a bit of everything that ends in "yes."

The wine list is audaciously high-end. That’s understandable. Red wine is to steak what Simon is to Garfunkel. If you’re going to pay for great steak, there’s no sense in tarnishing the indulgence with liquor-store zin. But they should have a few options that are under $60, and we don’t find any. I ask the sommelier, and he masterfully pairs two wines in the $75–$85 range, including a 2015 Domaine Le Sang des Cailloux Vacqueyras Cuvée, a grenache blend that cuts and coddles the steak.

In the presence of an expensive wine list, there’s no shame in calling the sommelier over, naming a price, and asking him to find something. This is what they’ve trained for, and if anyone calls you cheap for wanting a bottle under $100, politely ask if they’ll drive you home in their Aston Martin at the end of your meal.

At the end of the day, the grandeur, humor, and design of Born & Raised is beyond compare. It’s like dining on the Titanic, with gangsta rap. This is a building that will endure, even if high-end steakhouses become an indulgence of America past. You could sell air smoothies in here and people would come. If Born & Raised does for some reason bring Consortium down, it’s a pretty wonderful way to sink.