Mall food is no longer served exclusively on a stick. Up until very recently, you had two options while getting gouged for designer jeans: Fast-food chain gruel or sit-down chain gruel. Employees were forced to wear tacky uniforms that slowly let the air out of their souls.

That’s changed. Del Mar Highlands gets credit for turning the tide in San Diego. In 2011, its $20 million overhaul brought in concepts by a James Beard winner (Mia Francesca), plus big local names like Brian Malarkey, Matt Rimel, and Diane Powers. Restaurants went from being cheap filling stations to the main attraction.

Flower Hill Promenade badly needed new blood. It looked wan, especially for its location on the corridor between affluent Del Mar and affluent-er Rancho Santa Fe. So management threw $30 million at the problem, and it worked. They brought in a chi-chi Whole Foods (with a bar!), Cucina Enoteca (the latest from restaurateur/designer Tracy Borkum) and, to take over the former Paradise Grille, they lured adored local chef Matt Gordon.

Gordon made his name in North Park with Urban Solace. North Park is hipsterville, where beard trimmings are composted and people throw bike restoration parties. The restaurant’s facade is a playfully garish, canary-yellow tribute to New Orleans. It may be architecturally mockable, but it looks like nothing else on the block.

"If there’s been a complaint with Gordon’s food, it’s that there are so many flavors... One who complains about such matters might want to consider taking a hike. It tastes good."

That’s an important distinction, because the chef’s second spot—Solace & The Moonlight Lounge—went into a funky, tiny, LEED-certified mall on Highway 101 in Encinitas. The third location, Sea & Smoke, is here, in an even less funky mall. Cucina Enoteca snagged a stand-alone building (a former Chevy’s) that Borkum could completely mold. Sea & Smoke was relegated to a 7,100-square-foot spot in a bigger building of units (albeit one with a multi-experience, split-level setup). Trying to stand out here is like trying to assert individuality in a barbershop quartet.

The restaurant is divided into three main spaces—the upstairs brasserie (bright elegance), a downstairs den (dark leather equals Scotch), and an outdoor wooden patio with bright blue and green chairs that look like portals to Pinkberry. Taken together, S&S is an 18-hour kind of neighborhood hangout—from a post-yoga al fresco breakfast to an upscale dinner to casual insider trading over drinks in the dark.

Gordon’s food, here with the help of chef de cuisine Billy Geiger (ex-El Biz, Bernard’O), is as it’s always been: very good, very comforting, not restrained in the slightest.

Small plates are hit or miss. Charcuterie and cheese are all top-notch, but a Mary’s chicken liver mousse topped with fig jam is served fridge-cold. The subtle flavors in the mousse (apples, honey, shallots) need room temp to come alive. A cauliflower dip is what it is: a good, fatty cheese dip of Mornay sauce with veggies to make you feel better about your decision-making. Dips like these are the Piña coladas of warm food. A Paso Prime bone marrow with a crusty horseradish gremolata is excellent. As is the cornbread with pickled Fresno chiles, served in shallow cast-iron so it’s nearly all life-affirming crust. It needs that cilantro butter like coffee needs a sidecar of ginseng, but no one said excess wasn’t tasty.

If there’s been a complaint with Gordon’s food, it’s that there are so many flavors. One doesn’t have the opportunity to appreciate the unique finery of a single, well-rendered element. One who complains about such matters might want to consider taking a hike. It tastes good. If the crust on his bone marrow is just a touch too intense and therefore obscures the flavor of the marrow… well, be a genius and scrape a little off.

Ironically, only four of Sea & Smoke’s 12 entrees ever lived in the sea. I’d pass on the scallops with a too-sweet vanilla crème Anglaise, but no complaints with the Maine lobster. Wood-firing is risky, but the kitchen keeps it from drying out, and roasted caramelization on buttered lobster is a rare treat. There are four options for the vegetarians among us, and the confit carrot with multigrain risotto (faro, quinoa, barley, and bulgur) is an excellent one. The cream and Parmesan are offset just right by a sour reduction of red wine and saba (aged grape juice).

For all the flavor-bombing in his starters and salads, Gordon’s meat entrees are almost minimalist and need to be ordered with a side (go for the Brussels sprouts or the obscenely good, double-chinnish mashed potatoes). A tower of lamb shoulder comes in only a rouille (sauce). Thank God the meat is succulent and the cumin-heavy rouille deeply satisfying, because you’ve got 20 identical bites. His duck also comes only with a pomegranate gastrique, and doesn’t hold up as well (the gastrique is overwhelmingly tart). Yet both pork entrees—a maple-coated belly in sriracha-yam purée and a brined and sous-vide chop in a mustard jus—bring honor to top-notch swine.

For dessert, you do have to try the "Sea and Smoke." Gordon hired hyperactively creative pastry chef Jeff Bonilla (ex-Kitchen 1540), and this dish is his fever dream—a goat-cheese custard steeped with cigar (yes, tobacco) in a gelled Cognac consommé, with some of the best candied orange peel I’ve ever tasted. It may be better intellectualized than eaten, but I enjoy both aspects.

Sea & Smoke is a good restaurant—excellent when you consider the deeply heat-lamped culture of mall food it’s helping to change. 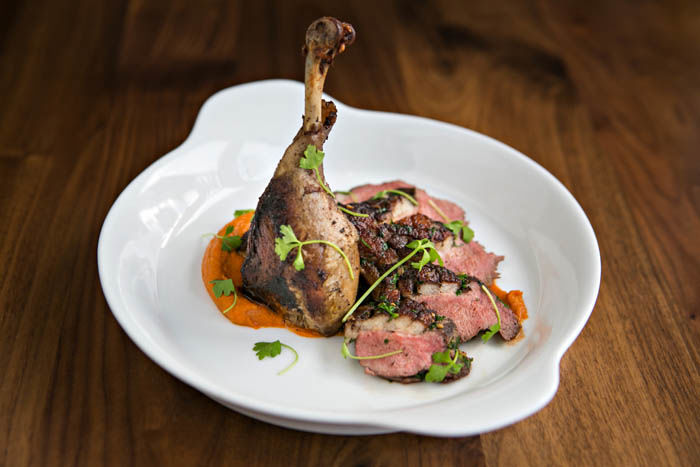 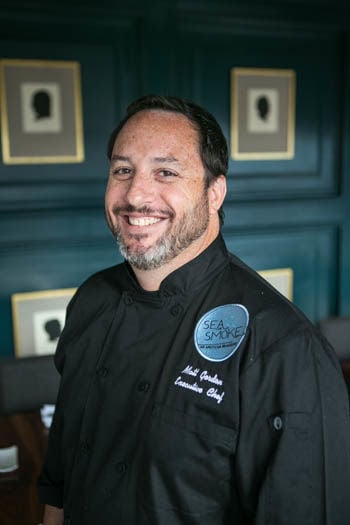 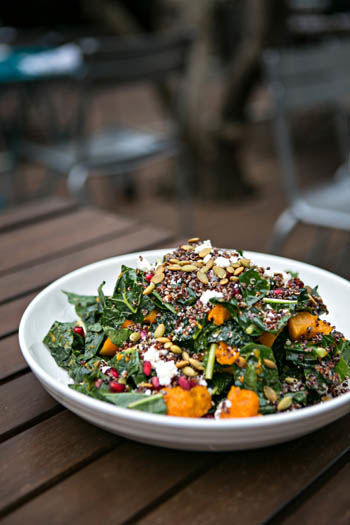 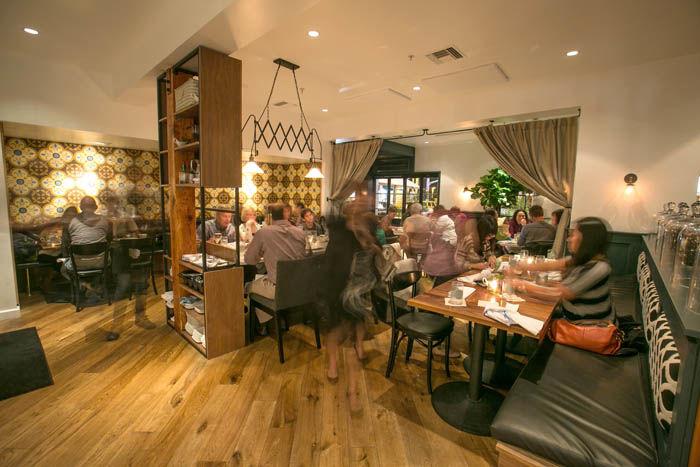 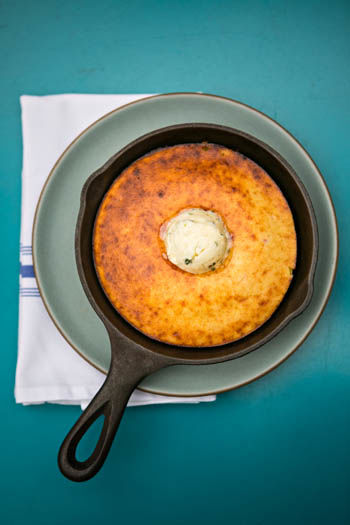