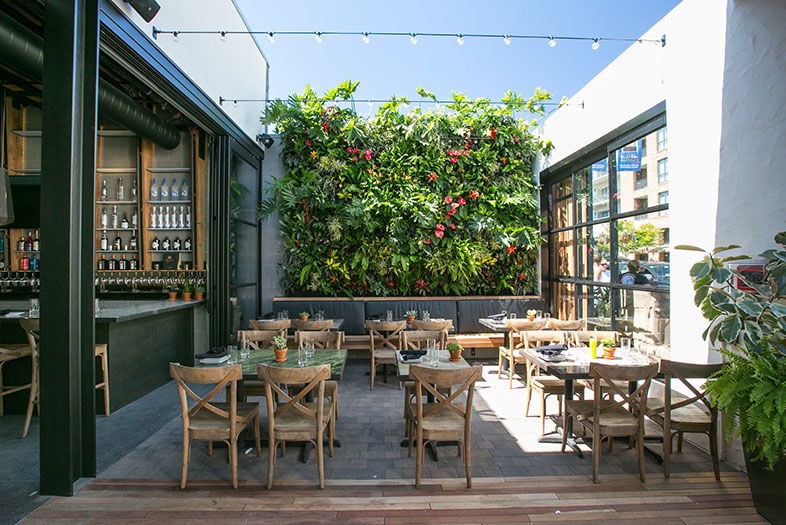 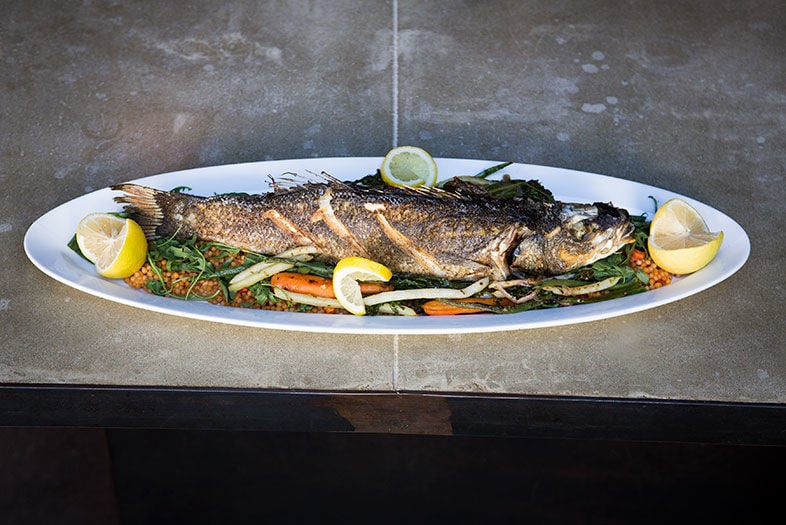 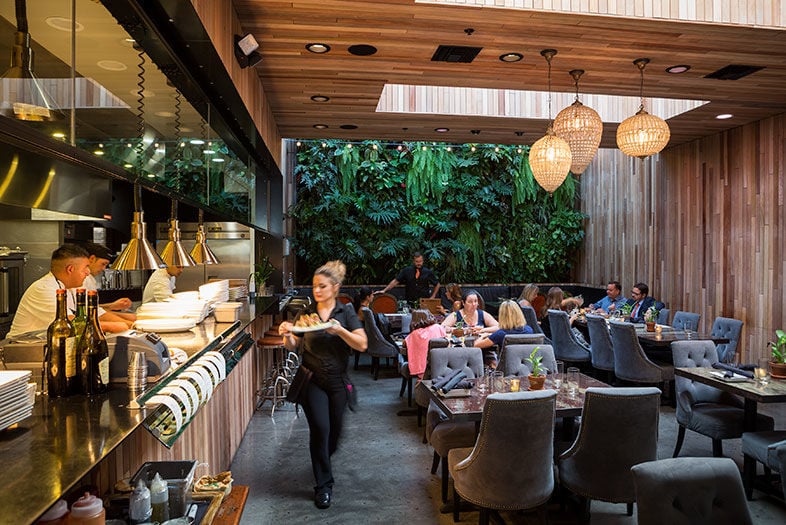 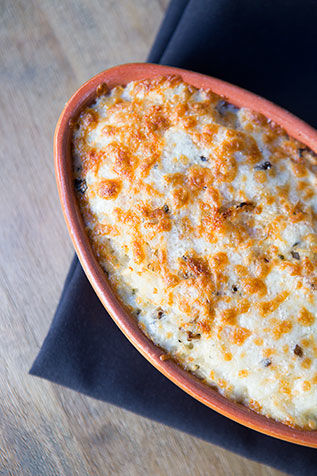 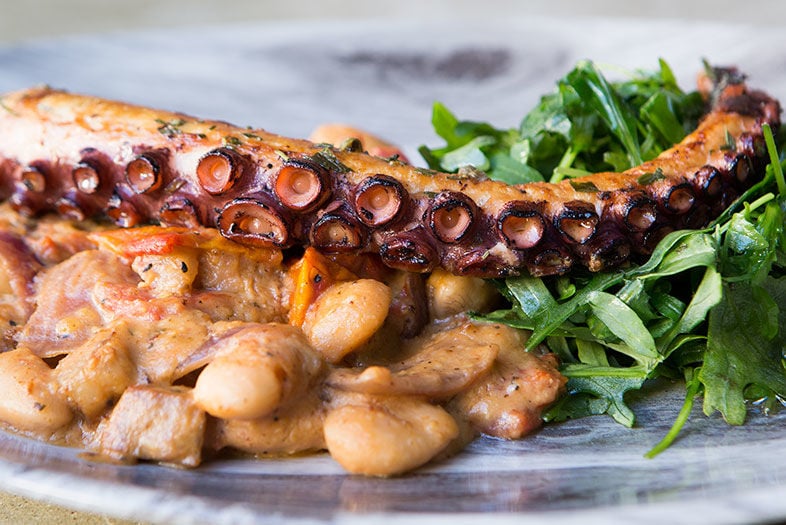 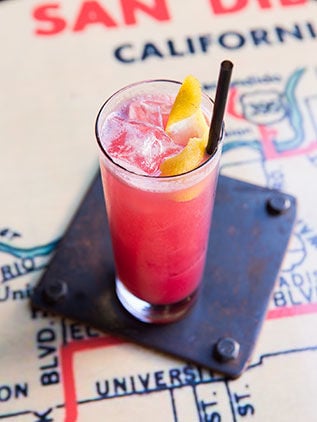 The Patio on Goldfinch

Remember fern bars? They were big in the 1970s. On Three’s Company, Jack Tripper’s friend Larry did most of his sleazing in fern bars. They were dead sexy. The idea was to flip your expectations. You’re inside a 1970s bar. You expect lacquered wood and wet moustaches. Instead, you find a rainforest.

Most plant walls are made with succulents—humble desert greenery that doesn’t need much water and doesn’t grow too fast (trimming a vertical garden isn’t simple work, nor is tending to its soil).

The two plant walls at The Patio on Goldfinch in Mission Hills are not like that whatsoever. They are how a drag queen might design a plant wall—showy, a touch gaudy, and so, so awesome. Tropical ferns jut out here, red tropical flowers burst over there. The plant walls are thick and wild, like craft beer beards. I wouldn’t be surprised to see an entire family of pumas emerge from them or learn that a coffee farmer is stuck in there somewhere. They are two of the most beautiful things I’ve seen in a restaurant.

During one meal, a dead leaf falls on one of our plates. The price you must pay for extreme plant walling.

It’s not just the walls. The Patio is one of the most inspiring restaurant spaces in San Diego. Designed by Lahaina Architects, it’s a lovely indoor-outdoor cave with reclaimed slat wood, brass, massive windows with roll-over metal "shutters." The waiting bench outside is made of driftwood, just like your single dad’s 1978 coffee table. The most compelling part is that "patio." Really, that’s a misnomer. It’s more a room without a roof—a truly special environment with its own fireplace that takes full advantage of San Diego’s perfect weather. People will fall in love or lust here.

Goldfinch is the second restaurant for the group, under owner Gina Champion Cain and chef John Medall. Their first, in Pacific Beach at the old Lamont Street Grill (renamed The Patio on Lamont), is a huge success. Serving breakfast, brunch, lunch, and dinner, Goldfinch is a pretty enormous undertaking.

We start with Sunday brunch. The day’s special—a filet mignon hash with a chipotle sauce and a poached egg—is very good, a steak-and-eggs worthy of a bistro in a border town. Also suggested is the bourbon Dutch pancake, stuffed with caramelized bananas and apples, drizzled with berry compôte, agave-maple syrup, and Chantilly cream. The chilaquiles, however, fall a bit flat for a reason I’ll encounter repeatedly over three meals. It’s not that the flavors are off; in fact, they’re reasonably good. It’s just that they all rest in the same warm comfort zone with smoked chicken, cheese, eggs, avocado, tomatillo sauce, and sour cream. It lacks an acidic pop (the tomatillo is very mild)—a bright bite of vegetables (peppers would be great), a pepper-based sauce, or even a smattering of herbs.

The Patio has built a glass cheese cave, aging its own with help from top local cheese store Venissimo. Grilled cheese sandwiches made with fancy cheese sound like such a good idea, right? Only, I’m rarely sold that the added level of complexity is worth the extra cash ($13 in this case). When I’ve seen it done well, the bread is treated very lightly—just a silent messenger to deliver the gourmet cheese’s good word. The Patio’s bread is really nicely buttered and caramelized into a state of significant umami. May as well be bulk Cheddar underneath at that point.

At lunch, poke tacos are made with sushi-grade ahi in a soy-sambal marinade, tucked into a fried wanton shell. It’s a creative Mexinese idea. But sambal is Indonesian hot sauce. I’m expecting a compelling punch—and get a polite handshake. The marinade is very light. What you’re left with is quality sushi (and you have a side of very flavorful wasabi), so the consolation prize is no depressing bit of food. Again, it feels timidly played.

There are zero problems with the spaghetti squash with lemon ricotta, sun-dried tomato tapenade, and a chiffonade of basil, tarragon, and parsley. Baked, it gets a nice crispy texture and tastes like a fall farmers market version of angel hair pasta. A watermelon salad (compressed with lime juice and simple syrup) has great flavor development with sweet melon, peppery arugula, smoked feta, and pickled onion and lemon vinaigrette. But whoa, that pine nut brittle. It literally chews like a Now & Later, simultaneously able to crack your teeth and yank them out. The Beef & Bleu flatbread is a parade of deep umami notes (New York steak, gorgonzola, bread, roasted garlic sauce, mushrooms, white truffle oil). It’s nice and rich. But a singular high note (onions, sambal, horseradish) would have set it off perfectly.

At the bar, it’s craft beers (why in San Diego would it be anything else?). The main focus is more than 60 types of tequilas and 14 mescals, plus two kinds of raicilla (Mexican moonshine). Their riff on the mule is house-infused pineapple and vanilla bean blanco tequila with ginger beer that’s carbonated to order. It’s a fantastic drink, not too sweet or too heavy on the ginger. The Mr. Chow is also very good, with gin, Ty Ku soju, cucumber, lime, and a splash of sriracha hot sauce. We try the housemade sangrita, but the spice makes it a challenge, not a pleasure to drink.

Medall’s octopus is phenomenal—a huge tentacle perfectly tenderized and well-charred, served over a gigante bean ragout with house-smoked pork belly and pine nut butter. Unless you’re currently avoiding pleasure, try the house-made monkey bread made with vanilla ice cream (yes, ice cream baked in there) and served with mascarpone-honey butter. It’s like eating Prozac-dusted endorphins. This menu is no prescription for weight loss.

A trio of Panko-crusted abalone, however, is just a miss. Shy on seasoning, the main flavor note is Panko. It does come with very good sun-dried tomato mashed potatoes, so we treat the abalone discs like canapés. The loup du mer—a European sea bass stuffed with hêrbes de Provence and served whole over Mediterranean couscous—is beautifully cooked and moist. But, again, it’s faint on flavor. It really could benefit from an aioli or sauce. The short rib with a demi-glace, however, is excellent over whipped parsnips served rustic with nice chunks of parsnips. The wild mushroom risotto has black truffle butter, cheese in the rice, and a thick layer of Boschetto cheese atop. It’s fairly delicious, though closer to fondue than risotto. At this point I start to see a pattern in Medall’s menu. Cheese everywhere. Nut butter in the ragout. Ice cream in the bread. Truffle oils. He’s not shy with life’s most pleasurable flavor enhancers. That’s bound to please a lot of people.

The Patio is a truly special place. Even when I’m grumping on about the lack of acid and greens and herbs in its life, I’d happily do so sitting under that plant wall drinking a mule, eating octopus, and listening for the screams of missing coffee farmers.