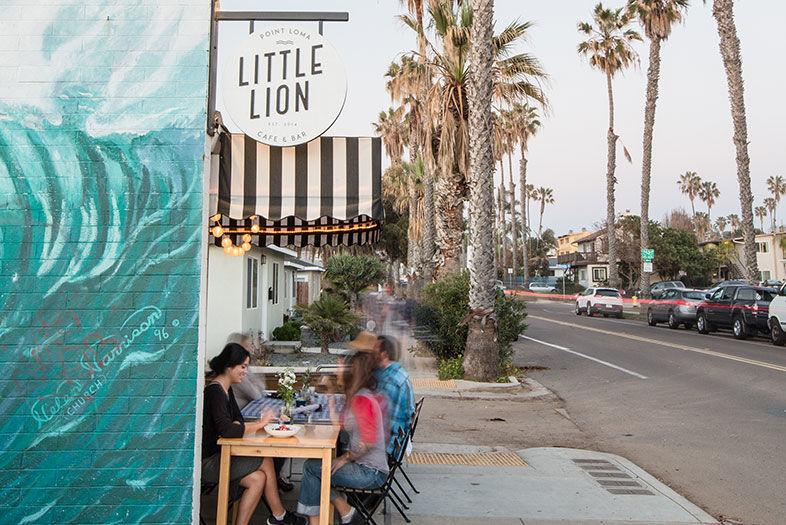 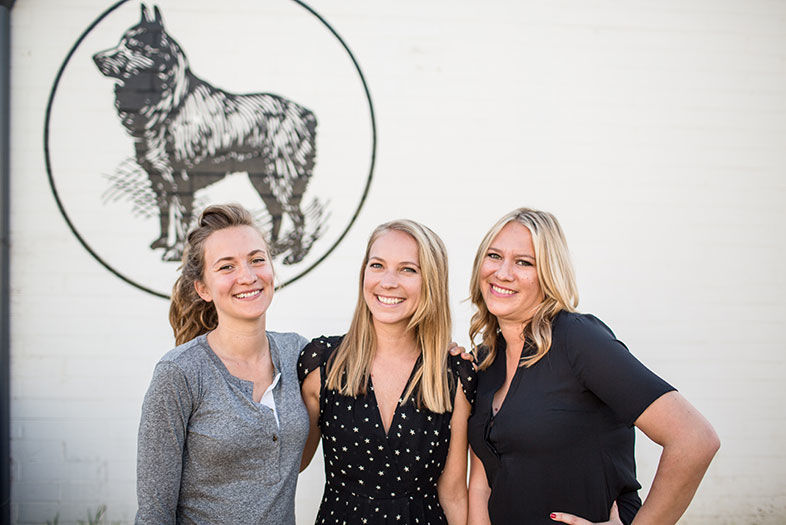 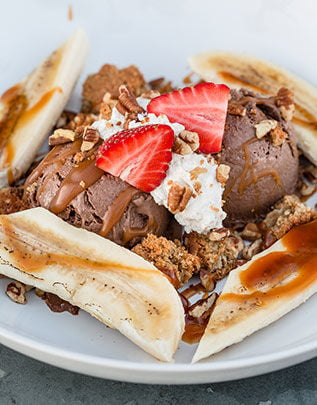 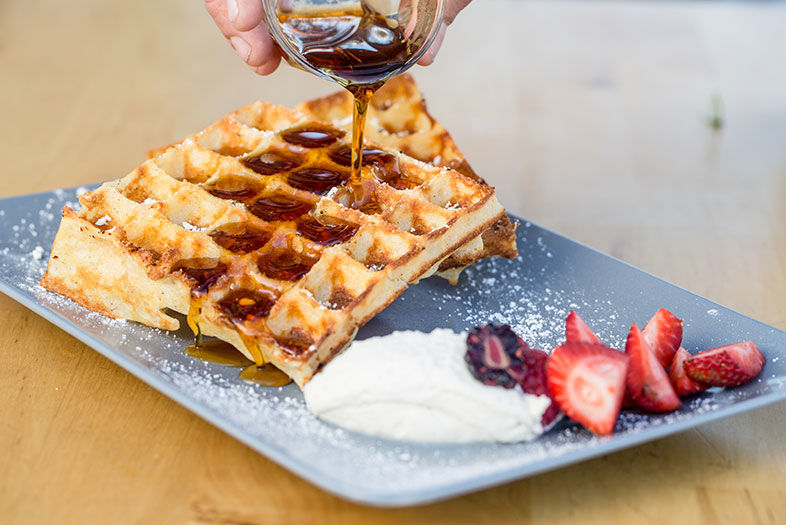 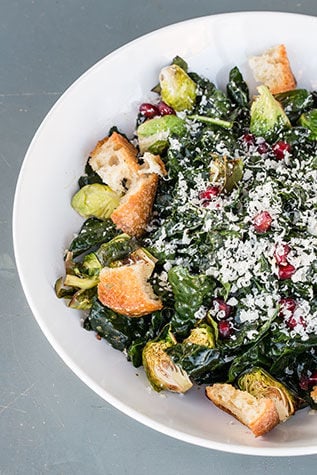 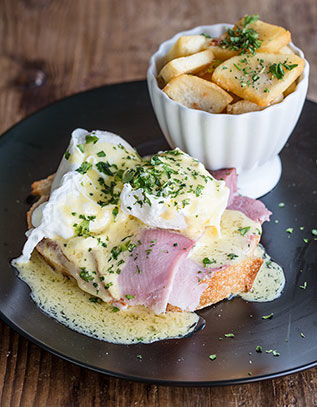 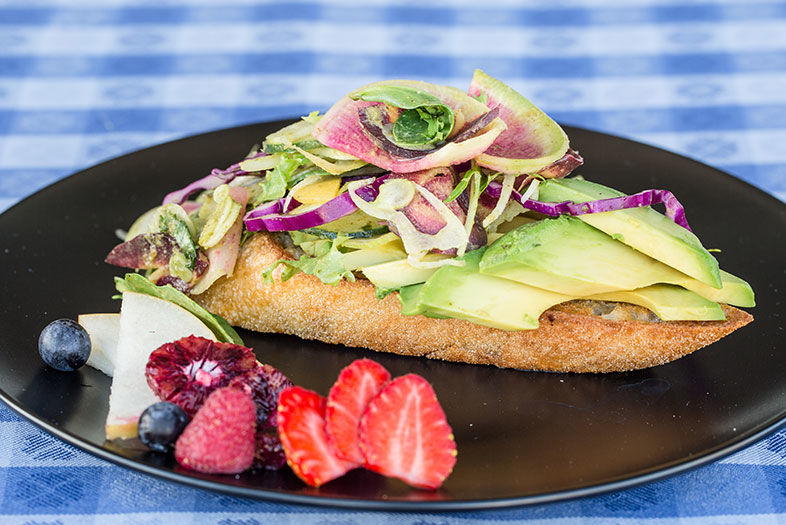 What is it about soul? You know when people have it. That easy confidence, the people who wear their own skin like their favorite T-shirt. But how do you know when restaurants have it? Albie’s Beef Inn had it, a dimly lit steakhouse with dark wood and oily art where octogenarians could spend their twilights in timeless sophistication. Café Chloe in the East Village has it, a romantic ode to Parisian rue bistros. So does Hanna’s Gourmet in Normal Heights, another tiny spot lovingly cared for.

And now Little Lion Cafe & Bar in Ocean Beach has it. The tiny, fake plastic fireplace in the middle of the room, plugged into the nearest outlet, is a cheeky piece of decor, but also expresses a wish for your comfort despite logistic constraints. A wooden table with legs precariously askew like a newborn giraffe is covered in a vintage tablecloth. There’s soul in helping old things reclaim beauty and usefulness. Like the fresh flowers in glass milk jugs on the tables, even if a few are a day or two into their wilt. Or the cut-up square of old menu that serves as a doily for the soup (a very good leek puree), which speaks to a waste-not ethic. Or the wall by the kitchen, covered in gray chalkboard paint with quotes about great food from Julia Child and Cesar Chavez, next to the funky beach town’s motto, "Keep OB Weird."

"Marry the man who brings you Champagne in the morning," reads one quote, attributed to Arlene Coulon.

The Coulon family name is a respected one in San Diego food. Little Lion was created by three young Coulon sisters—Jacqueline, Dominique, and chef Anne-Marie—dedicated to their grandparents. In 1977, Don and Arlene Coulon opened The Belgian Lion in Old Town, before relocating to Ocean Beach, where 3rd Corner now does business. It was loved for its old-world attention to the art of food and hospitality. The sisters’ aunt owns Michele Coulon Dessertier, one of the best pastry shops in San Diego (Anne-Marie developed the savory side of her catering business). Their cousin Nathan Coulon is the executive chef of True Food Kitchen.

If there’s something to be said for legacy, it’s not that restaurant-specific talents are genetically passed, like nice cheekbones might be. It’s that these women have spent their lives among some pretty renowned hospitality veterans—whether at family restaurants or in family homes—and have obviously absorbed some of their charms.

Maybe the soul lies in the daintiness of Little Lion. Charming things tend to be small. A single flower handpicked for its beauty has superior charms to a $200 bouquet that blathers for attention with its size. The answer to "Who designed the place?" is most likely "Her and her and her." Maybe it’s the huge oil painting on the wall, signed "Coulon" in cursive in the bottom right corner. Maybe it’s the black-and-white awning, which matches the servers’ aprons. This kind of charm comes from instinct, not money.

The size of Little Lion also mandates that the people working here must enjoy one another’s company. They absolutely must get along and intuit each other’s actions. There has to be a sort of collective ESP, as demanded by the lack of space. Otherwise, there would be blood. With 20 seats, Little Lion could feel claustrophobic. And at times, it does. But more often, it feels open, bright, and welcoming, thanks to the windows and the people.

It’s not perfect. The salt and pepper shakers are from Trader Joe’s, some covered with a Little Lion sticker, some not. Crafty shakers would be nice (they could also be stolen). Is that sticker residue on the large mirror on the south wall, maybe from some band or surf apparel or life statement the previous owner loved? Little Lion’s "bar" is literally two metal stools at the servers’ perch. Just go ahead and move the Chimay server tray that functions as their coffee cream-and-sugar station and clear a small space for yourself. You can sip wine or coffee here as the staff stands face-to-face with you, polishing glassware, ringing up checks, and joking with one another. You’ll hear it all. No joke or admonition goes unheard in Little Lion.

It’s in a tiny spot like that bar area where the line between the restaurant’s owners and guests disappears. In a place this small, you’re not in a restaurant, you’re part of it. There’s inclusion in that. If you prefer large tracts of dining land, this lion may be too little for you.

no waffling around: Belgian waffles served with berries, cream, and syrup

But what a shame it’d be to miss out on their Belgian waffle, lightly sprinkled with powdered sugar, with a dollop of whipped cream and fresh berries. The waffle is perfectly toasted and crisp, yet the cake-like interior is the thinnest I’ve ever eaten. It has the otherworldly lightness of a meringue or threads of spun sugar. It proves, yet again, that air is a phenomenal ingredient. The key to a good Belgian is fermentation, and Little Lion lets their batter sit overnight. It’s remarkable, no matter how many Belgian waffles you’ve indulged in.

The key to a good Belgian is fermentation, and Little Lion lets their batter sit overnight. It’s remarkable, no matter how many Belgian waffles you’ve indulged in.

We see unmistakable signs of Little Lion’s soul on every visit. Like a middle-aged gentleman who walks up to the bar with a box of homemade kombucha. The owner knows him by name, reaches into the cash register and pays for a case of it. He politely exits with a faint pride-smile. It’s the kind of restaurant that supports the trunk-of-my-car industry. The staff seems to know half of the people who walk through the door, and remembers without judgment whether they’re part of a band or a church or a crime.

I try the superfood bowl, the yoga pants of bistro fare. The kale is wilted to the right point—not unchewably raw, also not limp—the red quinoa has its coils delicately popped, the avocado slices are bright, alien green, and unblemished. It’s simple, healthy food done well, with good olive oil. Simple things are easily complicated, but not this. The same goes for the overly generous La Quercia prosciutto and burrata sandwich with homemade romesco, where the red pepper sauce acts as the light, piquant Garfunkel to the prosciutto’s more intense Simon.

Even though the food can take forever to be delivered, it doesn’t bother us, because time in places like this doesn’t feel wasted or rushed. The servers are never harried, even though there’s almost always a handful of people waiting outside. The atmosphere’s so chill that when you realize the chair at the middle table makes an ungodly squeal when someone scoots it back, you want to fix it yourself, rather than complain or post a scathing review that docks points for loud furniture.

The place invites a less critical eye that overlooks imperfection, even appreciates the unavoidable blemishes of from-scratch business. Like the spinach gratin, which—while having good flavor from La Quercia prosciutto, béchamel, and burrata—is too soupy, so it eats almost like spinach cream and not the other way around. The poached eggs in Cypress Grove goat cheese, leeks, and cream suffers from the same. I found a sizeable bone in my chicken curry sandwich (the staff apologized for it and offered a free "homemade Oreo," the size of a Moon Pie and very good). Their Belgian fries twice come out not browned nearly enough (potatoes, if desiring the best for themselves, first desire to be browned). Or the fried Jidori chicken, which is a tad dry (Jidori can do that, especially when fried).

But none of these small hiccups can spoil that feeling of soul, even as I try to pinpoint where it comes from. Maybe it’s the perfect eggs Benedict, two poached eggs hitting that sublime texture somewhere between silk and cream. The yolks are intensely orange, obviously from a hen that’s had a decent life, as hen lives go, and the Hollandaise is lightly applied. Some chefs, particularly of the hotel variety, apply Hollandaise like children apply jelly to a sandwich. With such a rich sauce, you need just a dribble. And the Fra’ Mani ham—one of the best hams in the country—makes regular Canadian bacon seem like we’ve been cheated for far too long.

The Mike & Sons eggs they use cost 200 percent more than commodity eggs, but also taste 200 percent better, and their bacon is the same used by The French Laundry—they are sourcing some of the best foodstuff in San Diego and America. Great ingredients are a must. You can’t, after all, play very good soccer by kicking a grapefruit around.

Maybe the soul comes from the kale salad, with pomegranate seeds and a Dijon truffle vinaigrette, with a light snow of Parmesan, vegetables, and huge, house-made croutons that give the dish a warmth and stability that only well-pampered gluten can. The truffle oil is restrained, its musty aroma playing a polite game of tit-for-tat with that of the Parmesan. The avocado toast with shaved vegetables on a La Brea baguette is a reasonably healthy love letter to Southern California’s most beloved fruit.

TOAST OF THE TOWN: Avocado toast with herbs and shaved vegetables on a La Brea baguette

Or maybe it’s the house-made chocolate ice cream with brandied bananas, caramel sauce, and the peanut butter cookie made from Michele Coulon’s recipe. Chocolate ice cream, that old song, shouldn’t wow me like this one does.

Maybe... it’s all of it. Maybe Little Lion needs another location for a Little Bigger Lion. They’ve cut dinner service to three days a week. They’ve created an imminently lovable thing, and now they need to expand to make it sustainable. There are talks of bigger rooms, of possibly turning this original spot into a takeout spot.

Maybe it’s time to see if the soul they’ve expertly curated can survive the awkwardness of growth.