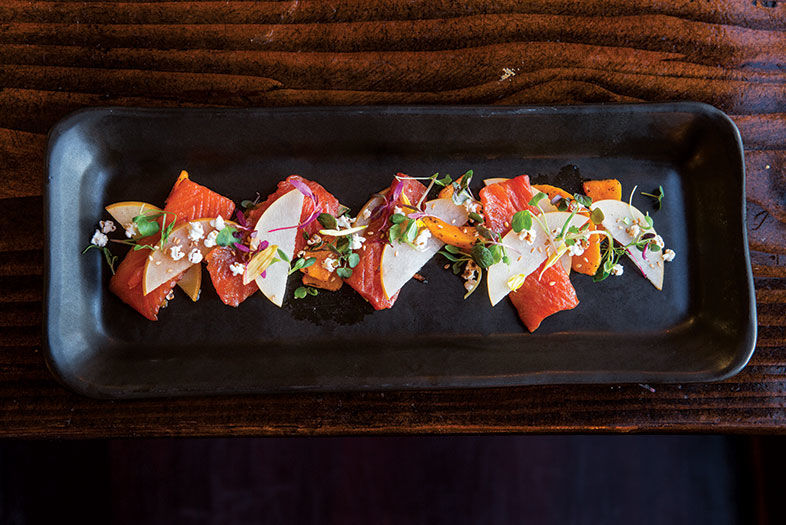 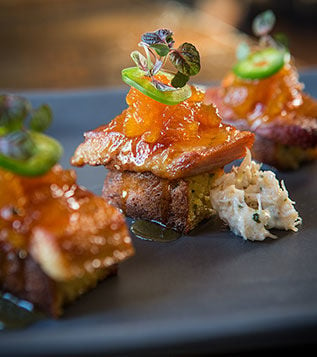 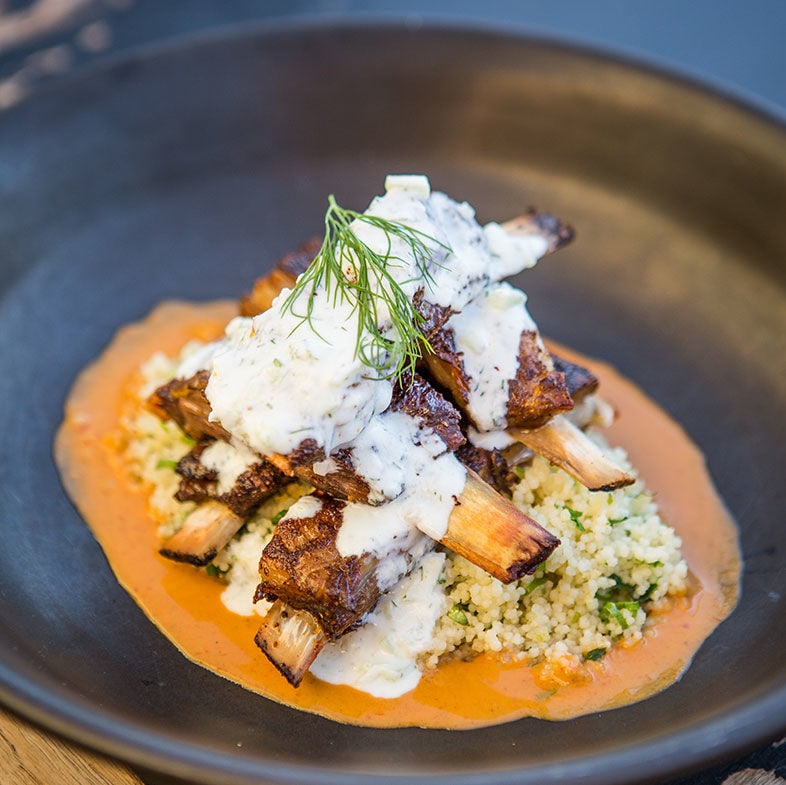 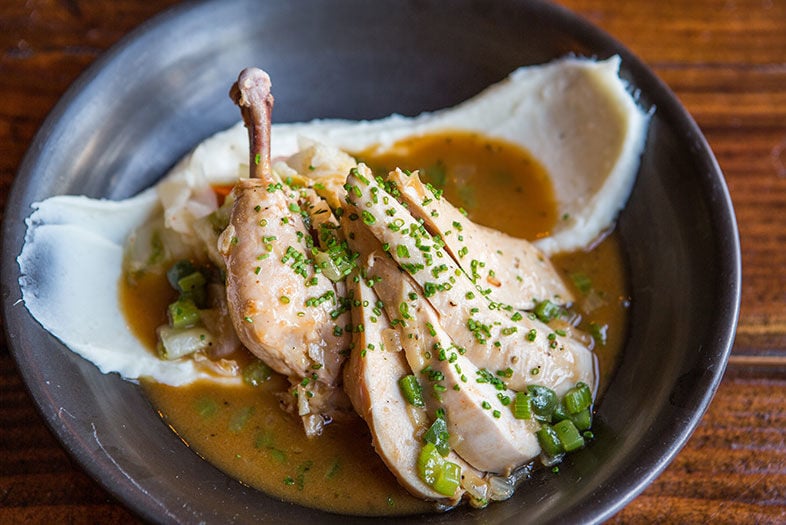 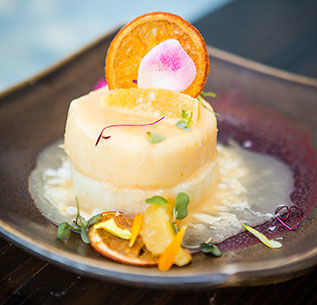 Stats are fun. Unless they’re these stats:

In 1992, the cod fisheries collapsed. Right now, three-quarters of the earth’s seafood is being fished faster than it can reproduce. Ninety percent of large predatory fish (tuna, sharks, swordfish, cod, halibut) have been wiped out. Some experts have predicted the world’s seafood supply could be wiped out in the next few decades.

Those estimates are not without educated rebuke. But most scientists who’ve looked into the world’s supply of seafood seem to reach the same general conclusion: Uh-oh.

With 316 million people, most with enough discretionary income to eat animal proteins, the United States’ hankering for sushi is obviously a major source of the problem. Some sushi bar favorites—like salmon, octopus and, especially, bluefin tuna—are among the most endangered in the world.

Chef Rob Ruiz has been at the forefront. He helped Harney make the transition to full sustainability. In early 2014, he left to open Land & Water Company, his own restaurant, in a historic Carlsbad Queen Anne home along PCH. It is a shrine to doing things painstakingly, exceedingly right.

All of the restaurant’s sushi is sustainable. They serve zero bluefin tuna. They serve Scottish Loch Etive steelhead (a trout related to salmon) rather than Atlantic salmon. They have a boat in Morro Bay catching sablefish, halibut, and tasty bottom dwellers. The boat used to throw away undesirable fish like thorny heads and rockfish; now L&W buys them and makes daily specials. They serve aquaculture-raised hiramasa (yellowtail) from San Diego. They don’t serve unagi (eel), because most sushi eel comes frozen and pre-seasoned in a mystery, caramel-colored goop. There’s no masago or tobiko (the bright orange and red roe found on many sushi rolls), because those are often chemically treated, artificially colored, and frozen. In fact, L&W serves no frozen fish at all.

Friends and family helped Ruiz strip the historical house to its original bones. A fireplace, hidden behind a wall, is now active in the main dining room for the first time in 50 years. They sanded and finished the hardwood floors themselves. It’s a nice, warm place. The only garish stain on the ambiance comes from a double-wide door in the middle of the restaurant opening to the blinding white fluorescent light of beach retailer Sun Diego. L&W Co. and Sun Diego should reach an accord (curtains? elegant Japanese partition?) that benefits both parties. I’d even prefer a flashing neon sign reading, "Psst, check us out over here!" than the current situation, which makes me want to avoid Sun Diego, not shop in it.

L&W recycles all glass, paper, plastic, cardboard, cooking oil, and compost (used in the restaurant garden). They save their excess bar ice and water (like the water used to blanch veggies) in a 55-gallon drum to water the garden. Line cooks pedal bikes while working, to generate electricity for the dining room (that one’s not true, and yet might be a real prediction of the future).

If this all seems overboard, most progressive things do. In the days of a waning global food supply, I care about a restaurant’s ethics and let its good or bad behavior guide my patronage. That said, ethics don’t taste awesome. I’ve had far too many sustainable organic meals that made my ethics swell with pride and my mouth recoil as if punished.

Thankfully, L&W is one of the most delicious restaurants I’ve eaten at in a while. The menu—from Ruiz, chef de cuisine Brandon Nichols, and sushi chef Keola Liu—is a mix of creative sushi, yakitori, and full-on French and global cuisine with purees, gastriques, and other fancy wet stuff.

From the starters, their baby kale salad is one of the best piles of raw food in the city, with candied walnuts, persimmon puree, blue cheese, Asian pear, apple, and white balsamic. Sweet nuts and musty cheese with greens are nothing new, but the persimmon and white balsamic are—and it’s that unfamiliar extra that makes it special. Beer lovers might order the pub-style crispy chicken with lightly battered bits of Jidori with lemon, Kewpie mayo, and rock salt. Ours is a touch under-seasoned, but the chicken is beyond tender and juicy, the light breading a welcome reprieve from the usual "fried chicken bits" you’ll find at restaurants where it’s all batter, no bird.

The seven-hour smoked lamb rib is excellently cooked and spiced Moroccan-style under tzatziki yogurt sauce, but it’s the couscous over coconut red curry that really shines in the dish. Ruiz does this often, mix-and-matching sauces in a single dish. At times it seems a touch overkill, one big flavor confusing another. But luckily, his flavors are all very good. And I think the good-ingredients-simply-prepared trend has created a less thrilling restaurant experience.

L&W Co.’s crispy beef tongue skewers—braised and made into crispy, well-spiced rectangles with horseradish-infused Japanese mayo—is well done, if a touch under-salted. It pales next to the jalapeño cornbread topped with crispy pork belly, orange marmalade, and Japanese mint. If this dish cut the sweet element just a touch, it would be perfect.

From the sushi menu, the Water Roll—spicy tuna with avocado and stone crab, sweet tsume glaze, dragon sauce (sesame, roasted chiles, orange zest), and whatever sashimi is fresh that day, all drizzled with ginger, ponzu, and citrus—is an excellent show of how fresh sushi can taste. Not overly mayo’d. Not tempura’d. Maybe the only miss we have on the menu is the salmon candy—essentially maple-cured steelhead jerky with roasted red curry squash, Asian pear, and popped sorghum. The jerky is so dry it calls for a little citrus vinaigrette, or some moist element that the squash and pear simply can’t muster.

It’s funny that a chef known for his dedication to raw seafood serves such a phenomenal chicken dinner. Ruiz puts a half-Jidori in a bowl with mashed potato puree, bacon-herb jus, and kimchi, and it’s like the best deconstructed, vaguely Korean chicken pot pie you’ve eaten. The kimchi is just the perfect amount of fermented tart. The steelhead is also perfectly cooked, with skin that breaks like fake Hollywood glass, served with an orange demi-glace over a buckwheat soba noodle salad with shiitakes.

For dessert, we have three. Sushi restaurants are not renowned for their desserts, and restaurants not located in hotels (who can afford pastry chefs) are also not particularly known for desserts. But all of ours were excellent—if a tad what’s-wrong-with-America in the portion size department. The orange dream is just orange sherbet with white chocolate mousse, until you add that miso-caramel and ginger simple syrup—which adds intrigue and excellent flavor. The gluten-free frangipane tart with honey-amaretto-poached pear stuffed with Brie is excellent.

Land & Water Company makes my list of one of the best restaurants to open in the past year. It’s not terribly interesting to look at. It’s got a loud, bright neighbor messing up its vibe. But ethics and flavor rarely match up so well.