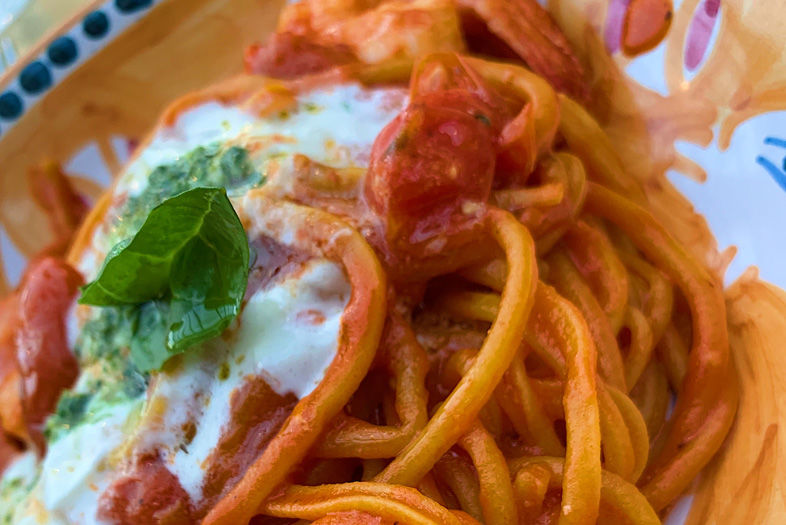 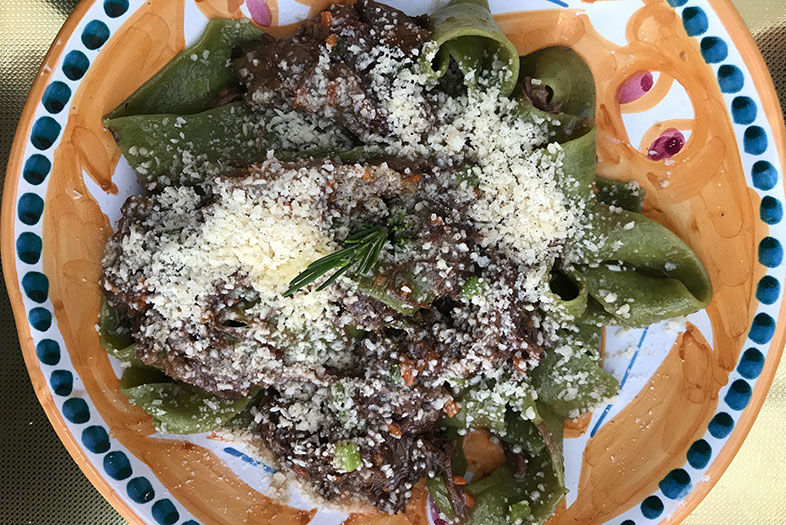 The two forms of pasta are like our political parties. I see bits of value in both, but neither float my boat on a whole, spiritual level.

I want fresh pasta’s just-hatched flavor of good flour and newly creamed starch. But fresh-made noodles often just lay there, limp, as if they’ve spotted a predator and trying to play dead.

That’s why I also crave the al dente almost-snap of dried pasta. That little half-bite is everything. It feels like progress. Texture is essential to enjoying food. Our mouths are blind and texture is the braille. Problem is, dried pasta tastes a little catacomb-y, like something that died in a bag.

Cesarina in Point Loma strikes a pretty phenomenal balance between the two. I recently told their story of the three Italian men, the northern Italian chef, and the woman who inspired their name.

Cesarina is located in the no-man’s land between Ocean Beach and Point Loma (aka, "fancy OB"), at the corner of Voltaire and Catalina. Lines of cars drive through this intersection every day. But getting them to stop is like standing in Des Moines and waving at planes. Few do.

They should, though. Because Cesarina’s patio is charming. It’s enclosed in wooden slats, which dapple San Diego’s famous sun in geometric shadows. It makes diners’ faces look like very pretty M.C. Escher paintings.

That pasta is something else. They make it to order at their pastificio—a pasta-making station, enclosed in glass so that cooks look like talented zoo animals. As they did at the farmers markets where they started, Cesarina only uses flour and water for their pasta. No eggs. And that’s the key. It gives their fresh pasta that near-al dente bite.

I tried chef Patrick Money’s short rib pappardelle and the simple, classic pasta that won him the job—the pomodoro fresco. The spinach pappardelle is wide, thicker than usual, and tossed with root veg, fresh herbs, braised short ribs, and Parmigiano. Short ribs are like Bradley Cooper’s career—with enough time and patience, they become excellent. And Money’s are just that, basted in the meat’s own slow-melting fat. They reek of the right herbs, spices, and aren’t killed by an over-reduced sauce (over-reduced sauce is the leading cause of short rib death).

Like clinically shy friends, the pomodoro fresco takes a minute to warm up to. Its first impression tastes like you should’ve ordered something better. But let it sit. After a few seconds, the taste of the tomatoes is so bright and fresh and alive and acidic. The subtle herbs come through. The pasta, again, is perfect. It’s a dish for people who prefer Bob Ross and other easy pleasures.

Oh, that bread—housemade focaccia with herbed butter. The cubes are warm, crusty up top and soft in the middle. They’re served in paper bags like mom used to do, or not do, depending on your mom. The butter is soft and room temp (as butter should always be—restaurants who serve it fridge-cold loathe humanity at some level). It would make payroll taxes taste delicious.

They have a tableside tiramisu. People have told me I committed some sort of treason not ordering this. Everyone raves. But my body has taken on a slight tiramisu texture, so I passed. I’ll be back.