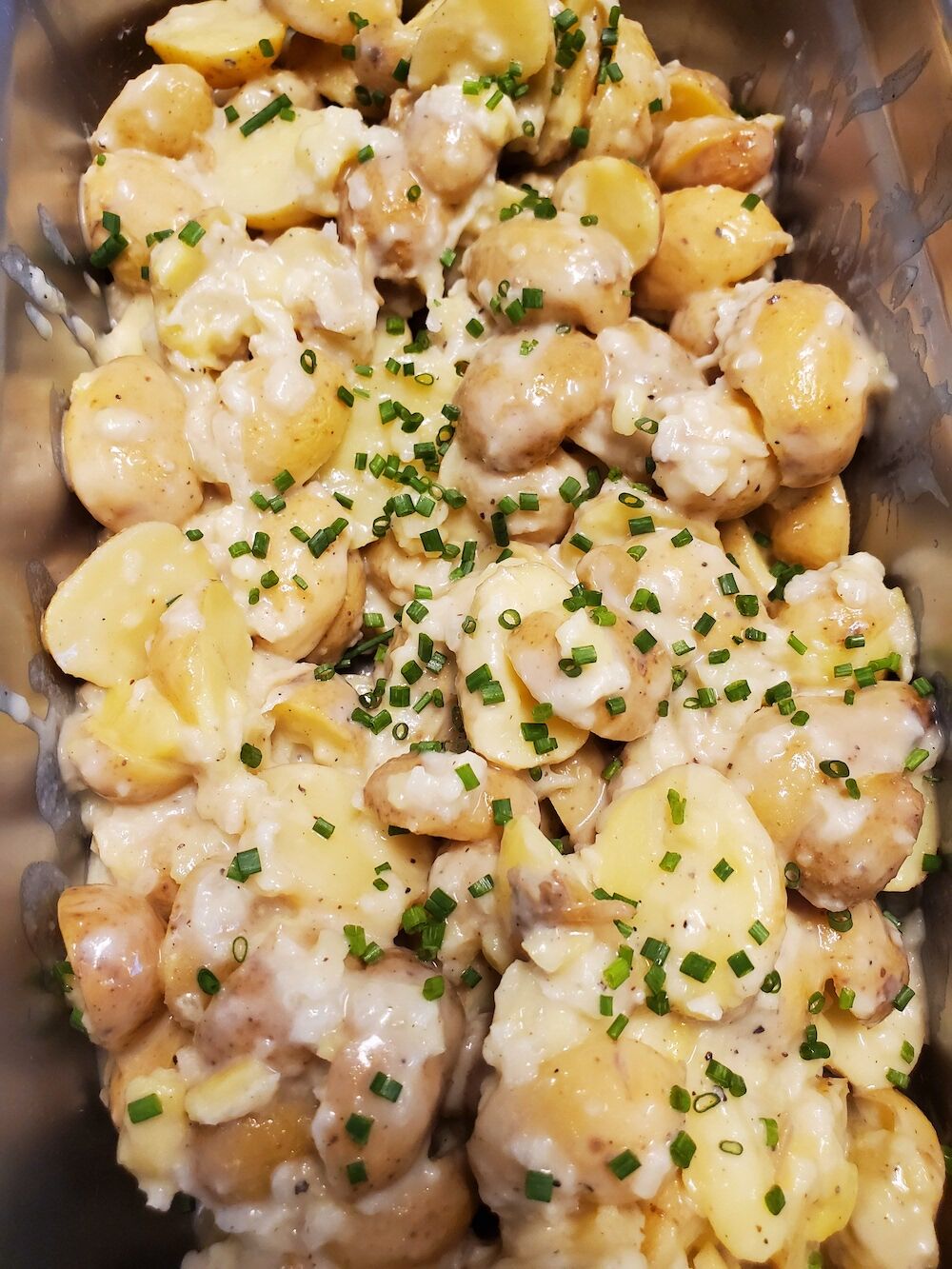 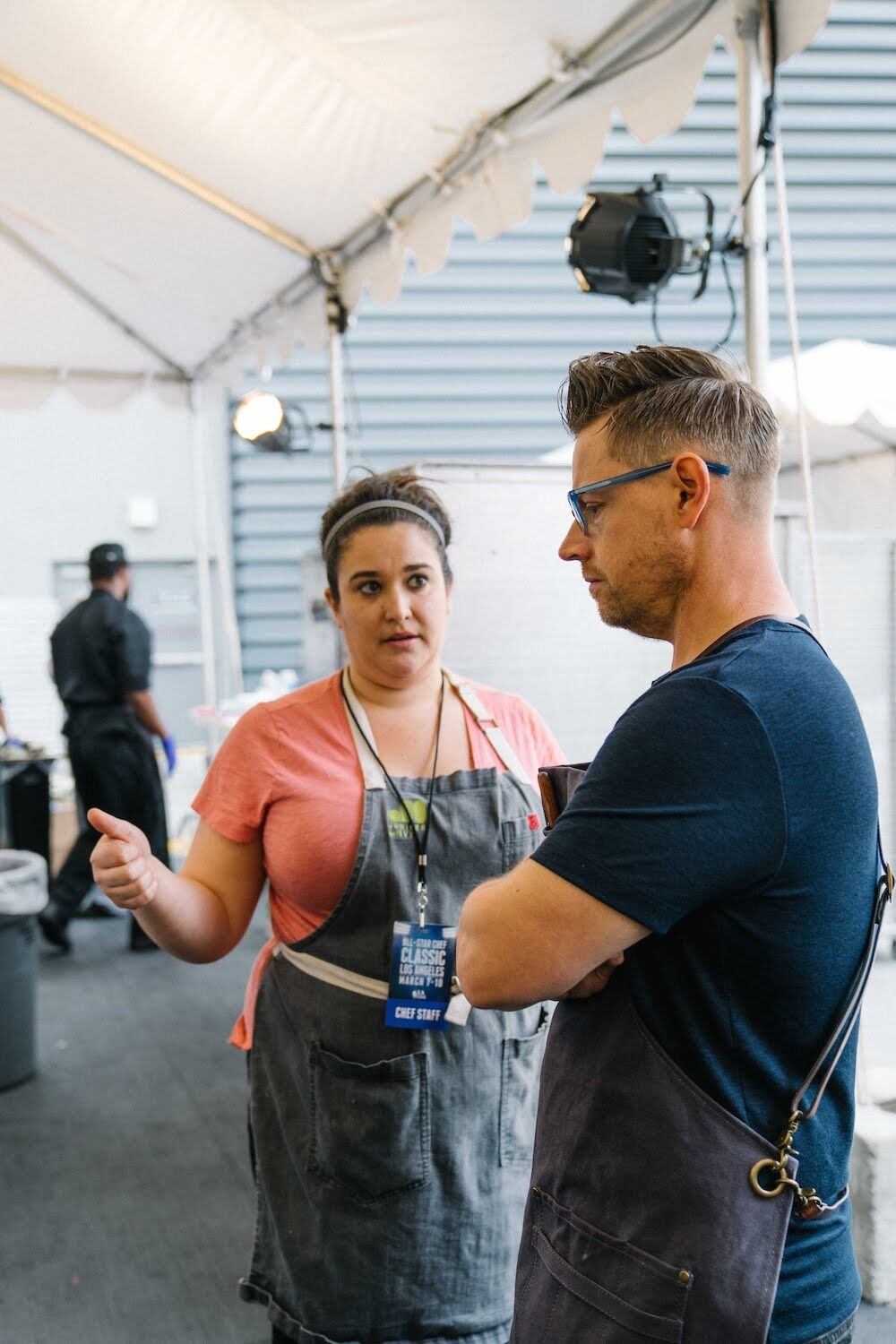 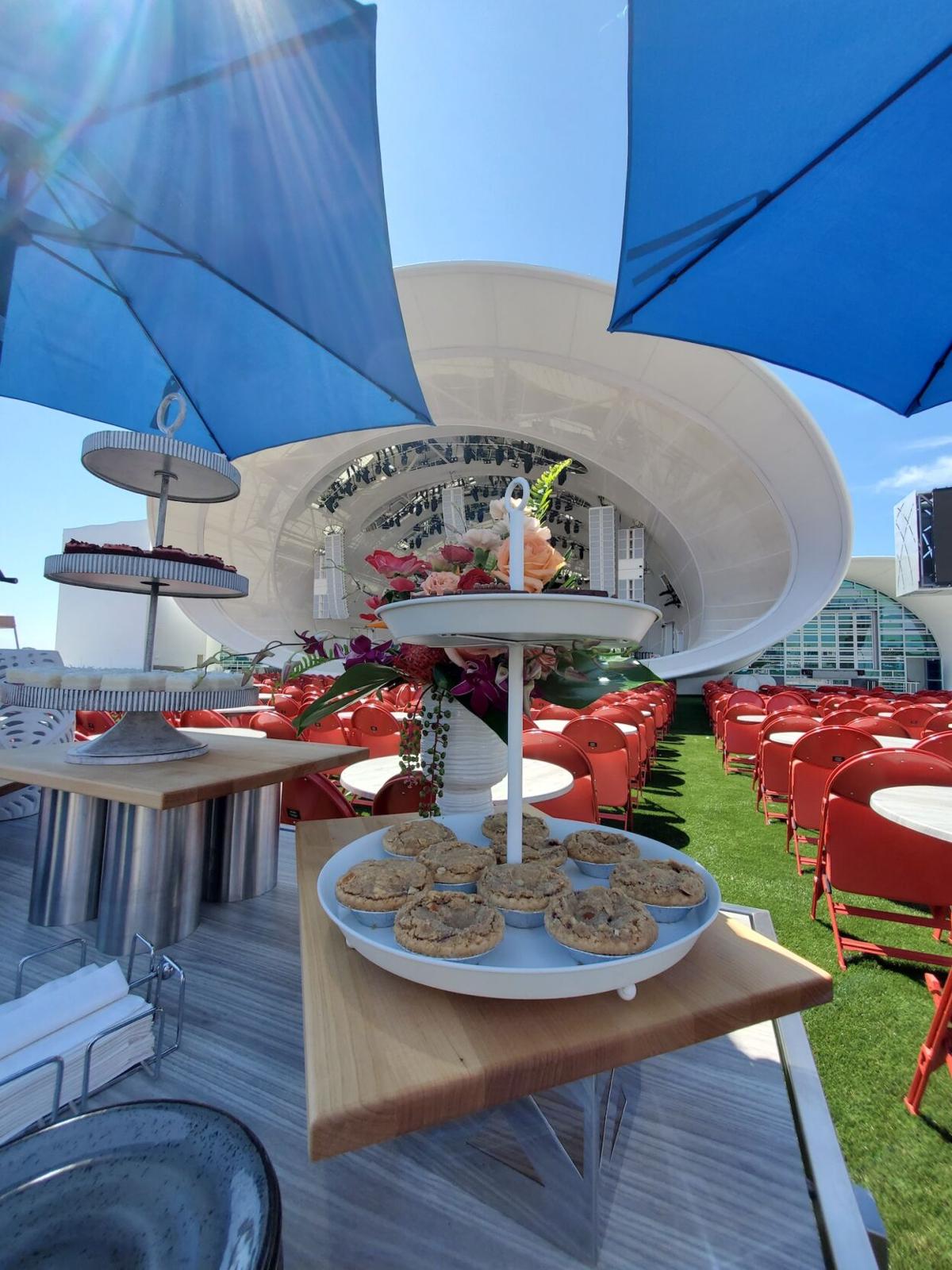 “Common came to perform,” recalls chef Scarlett Brida. “He didn’t place a specific order, so we just sent a little of everything—chicken, steak, and salmon. I was on my way out the door when I heard him on stage during his show say, ‘The kitchen just served me all this food but I’m a vegetarian and I have nothing to eat.’ I ran full-speed back to the kitchen and cooked up some cauliflower and potatoes. I was mortified. It was a lesson. Everyone got at least some vegetables from that point on.”

The Rady Shell is here. It’s a breathtaker, an all-consuming feat of architecture and art—a $98 million outdoor cone of immaculate sound built on a peninsula of impossibly green grass between the San Diego harbor and downtown. It is our alfresco Sydney Opera House, our Hollywood Bowl. A forever home for the San Diego Symphony and traveling musicians like Common, Jason Mraz, Nas, Gary Clark Jr., whoever has the moment. The sun sets over the water stage right, the city lights take over stage left.

“While we prep, the artists perform their sound check. When Jason Mraz warmed up, I sat in the front row and he sang to me for an hour. It was a once-in-a-lifetime experience.”

While most of us are fine pairing our live music with a hot dog and some semi-cold beer, the Shell teamed with world-class chef and San Diego local Richard Blais. Which means he and Brida—who for the last six years has been right-hand chef for Blais and all his headline endeavors (Top Chef, Food Network, Ember & Rye, etc.)—are in charge of dinner for the musicians. And their crew. And guests who sit in the venue’s dinner-table section (“San Diego Row”). In a tiny, 850-square-foot kitchen to the right of the stage, their team cranks out between 700 and 1,000 plates every show.

“For 600 of those meals, we have just over one hour to get them from the kitchen to the table,” she explains. “To put that in perspective, Juniper & Ivy will do 1,200 on a busy Saturday night over six hours of operation. The gates open at 5:30 and the cooks like to say it's the ‘release the hounds’ moment. Everyone runs to the table and once they sit, their orders are sent. Around 6 p.m. the ticket machine starts going, and it doesn’t stop until 7. I mean nonstop. All food has to be out before the show starts at 7:30. If we don't make it, the guests don't get their food—no exceptions. We’ve come very close, but have made it by the skin of our teeth every time.”

The menu rotates, depending on what’s in season and wild hairs, but it’s far, far beyond your normal concert fare. For a recent show by Jason Mraz and the San Diego Symphony, Blais and Brida served chicken Milanese brined in brown sugar and citrus, then sous vide, breaded in Parmesan, pan-fried in the cast-iron, and topped with farmers’ market peaches, mache, brown butter, and more parmesan. There was also a succulent rib eye in bordelaise sauce with confetti of pickled mustard seeds. And, at every show, Brida’s potato salad—her mom’s recipe, which takes three days (the potatoes are brined for 24 hours).

I spent the first 15 years of my career writing about music, loitering in some of the country’s great music halls. And I’ve never experienced an outdoor venue as stunning—visually and aurally—as the Shell. Seeing a show here is a new item in the bucket list. Sitting in the San Diego Row and being served a rib eye and Mama Brida’s potato salad while you watch the show is also in that list. I asked Brida what it’s like to cook there, and how they pull it off:

Troy Johnson: A thousand meals each show. 600 of them within an hour. How?

Scarlett Brida: To handle that speed, we spend all week making sauces and dressings, brining and cooking proteins, baking bread, et cetera. It's a crazy format. We prep while the symphony practices four to five days a week. The good side is that we get much more time to make everything from scratch, and do it all right. We can take on projects like 72-hour sous vide short ribs, or my mom's potato salad, which takes three days to make. A huge help is we have the backing of the convention center. They will bail us out from time to time and let us put burger buns in a random storage space that’s available. They also give great advice on execution. I've learned a lot from [convention center] chefs Drew Lopez and Sufi Karaien. They are freaking banquet wizards. I'd say this format is half catering, half restaurant. It's unlike anything I've ever done before.

“I want guests to turn to their family on the way out from a show and say, ‘Holy smokes, Tchaikovsky’s 1812 Spectacular was amazing, but did you guys try the potato salad?’

It is 850 square feet, including the dish pit and the walk-in. We're literally serving hundreds out of a space smaller than my one-bedroom North Park apartment. When we first saw it, we all thought, Oh hell no… how is this going to work? Shockingly, we've managed to figure it out. The key is extreme organization and thinking through every single detail. And of course, being a Richard Blais project, our kitchen is full of “robots.”

We have Alto-Shaams to hold items warm, we have ISIs [a pressurized canister that creates whips and sauces] to pickle things quickly, we use liquid nitrogen to cool things down right away because there's no space for an ice bath. We have more circulators than Juniper & Ivy and Ember & Rye combined. If Blais is a mad scientist, I’m his modernist monster. I should mention there’s also an official Shell flamethrower… I had to.

You get private shows while you’re cooking?

Bands usually do their sound check at 3:30 p.m. and the symphony practices most other days. It’s definitely the best perk of this job. Every time I come to work there’s an incredible musician or a whole orchestra playing. I like to pretend it's for my entrance music. Nas and the Symphony basically did an entire set just for us while we were prepping. When Jason Mraz warmed up it was just him, me, and one security guard. I sat in the front row and he sang to me for an hour. It was a once-in-a-lifetime experience. We’ve also gotten warm-up “shows” from Gary Clark Jr., Smokey Robinson, and the symphony. All on our little shell island of green grass, beautiful sunsets, delicious food, and mind-blowing music. I’m living the dream. We have a TV and surround sound in the kitchen that links straight to the Shell video team, so we get to watch and hear the shows from the line.

It’s impossible to find cooks right now—do you have a good crew?

Tremendous. Amazing. On any given night there's only four to five line cooks and one or two chefs. In comparison, there’s 11 to 13 runners, at least a dozen bartenders, and 30-plus servers. We’ve dared to do something totally insane to most. We threw out the concert food rulebook and replaced it with three-tier seafood towers, liquid nitrogen ice cream, and mango egg yolks. I’ve been traveling the country for the past three years, quietly looking over the shoulders of some of the best chefs in the world. We figured if they can do it, so can we. Call me ambitious, but I want the food to be on the same level as the symphony. I want guests to turn to their family on the way out from a show and say, “Holy smokes, Tchaikovsky’s 1812 Spectacular was amazing, but did you guys try the potato salad?” I don’t know if we could have pulled this off 10 years ago. To still be in the chef game today means you’re committed to this craft like never before. There's so many reasons to get out, but as me and my crew have discovered this summer, the reasons for staying are even better. I’m so proud of my team and my city, and I'm honored and humbled to be a part of it.

Scarlett Brida: I grew up on Long Island with my parents and grandma. The family has owned and operated delis since before I was born. I grew up in those delis, sitting over a bus tub peeling potatoes for hours and hours. My mom never wanted me to get stuck in the deli like she was, so I moved to San Diego to learn new types of cooking. The truth is, after all I’ve learned, I think that deli is just what San Diego needs. When the time came to decide what to put on this menu, I thought, “What recipes am I sure I can pull off for 1,000 people, no problem?” The answer, for me, was obvious: potato salad. It's an insane process. We cook and peel the potatoes on day one. Day two we brine the potatoes for 24 hours. Day three we dress with mayo, onion, and a whole raw egg. Who the hell knows why. All I know is it works, and I've never had any other potato salad like it. We went through a whole month of testing different potatoes to find the perfect waxy potato for this technique. It’s German, just like my grandma and mom, who were also incredible chefs. I credit my work ethic to them. My mom is also responsible for the recipe behind the chicken at Ember & Rye. I’ve been stealing her recipes for just about every project I’ve worked on. Now, after everyone has left the Shell for the night and the show is over, you can find me and my cooks, sitting over a bus tub peeling potatoes. Sorry, Mom.”

Place the potatoes in a large pot. Cover with 1 gallon of water and 1 tablespoon salt and cook until 90 percent done.

Strain out the water and peel while still warm. Lay the potatoes on a baking dish at room temperature to cool. Once cool to touch, dice the potatoes into bitesized pieces.

Meanwhile, bring the vinegar, sugar, 2 1/2 cups water, and 1 tablespoon salt to a boil. Stir until all the sugar and salt is dissolved.

Remove the liquid from heat and pour it over the cooked potatoes. Place in the refrigerator overnight.

The next day, add the vegetable oil, white pepper, grated onion, and egg to the potatoes and carefully fold in, trying not to break up the potatoes too much.