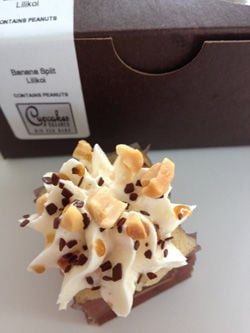 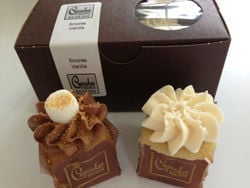 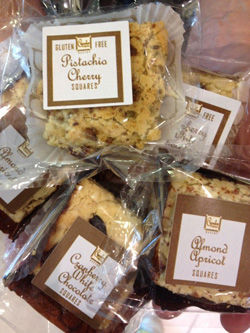 I first met Robin Ross five years ago when she opened up Cupcakes Squared in Point Loma. The idea was simple: use fresh ingredients (nothing artificial and no trans-fats) to create longtime favorite and unique flavor combinations in a square-shaped cupcake—both regular and gluten free. The shape was key. After all, they’re easier to pack and transport and they lend themselves to forming large cakes. Brilliant!

The business has thrived and Ross has become a mainstay at numerous fundraisers. In fact, "C2" donates fresh-baked goods a few times a week to the Rescue Mission and Just Call Us Volunteers. Ross gets around. So, was it any surprise that the folks at Westfield’s UTC mall got in touch with her to invite Cupcakes Squared into their renovated food court?

Ross moved in just a couple of weeks ago. You can find C2 at the foot of the food court’s secondary entrance. It’s a small space, perhaps 60 square feet. Certainly, no baking is done there, but every morning Ross brings in six varieties of cupcakes—both full size and minis—and her brownie-like squares. And, for those in the area who want to choose from her complete flavor repertoire, you can go online to see what’s available, call in your order at the Point Loma store, and pick them up at UTC.

I, of course, had to sample some of her new flavors and flavor combinations. Here are a few standouts:

All that’s missing here is the maraschino cherry, but you won’t miss it thanks to all the goodies packed into this small package. Inside the banana cake are pieces of fresh strawberries and pineapple, along with chocolate chips. Crowning it is smooth vanilla buttercream, dotted with chopped peanuts and chocolate sprinkles, and finished off with a salted caramel drizzle.

The afternoon I stopped by I was expecting my cousin, his wife, and their two little kids for a visit, so I wanted cupcakes they’d enjoy—and you know how picky little ones can be. Ross suggested her Kid-Friendly two-pack that holds her Smores and Vanilla flavors. The Smores is a warm graham cracker cake with chocolate chips and a hint of cinnamon. It’s topped with chocolate buttercream and a mini marshmallow. The Vanilla appears to be your straightforward vanilla cake, but there’s nothing straightforward about the flavor. Ross likes to call it her Hawaiian Vanilla cupcake because of the deeply rich Hawaiian vanilla that goes into it and the luxuriant vanilla buttercream sporting little vanilla "vermicelli" sprinkles from Callebaut. Both were a big hit with the kids. Oh, and the adults.

Robin may have a business built around cupcakes, but her squares—both regular and gluten free—are favorites of mine. They’re really a cross between a brownie and a cookie and she packs as many goodies in each of the six flavors as is possible—and still have the connective tissue that’s the dough. So your almond apricot will be bursting with nuts and chunks of dried apricot. The pistachio cherry is punched up with pistachios and tart dried cherries. Then there’s the black and white (chocolate chip), chocolate coconut almond, peanut chocolate, and what may be my favorite—cranberry white chocolate. It’s tart, it’s sweet, it’s chewy. Oy! The squares are $2 apiece  and $10 for a package of six.