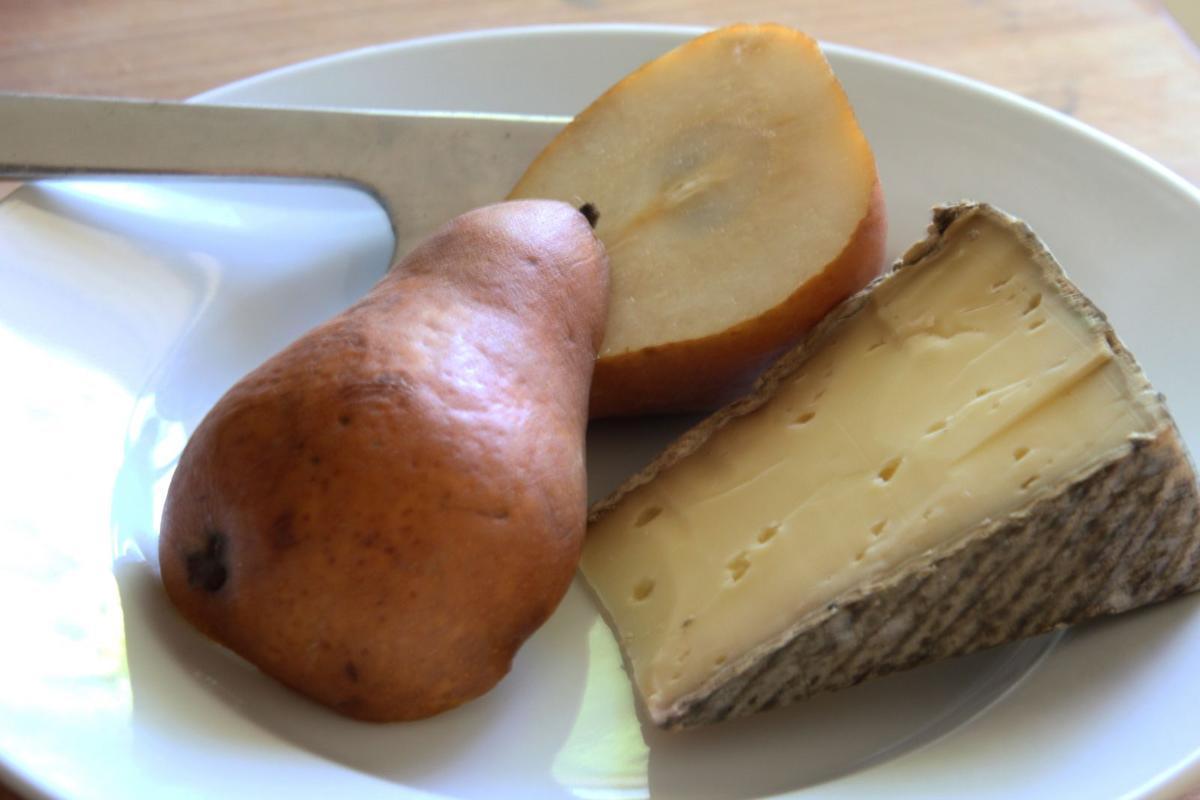 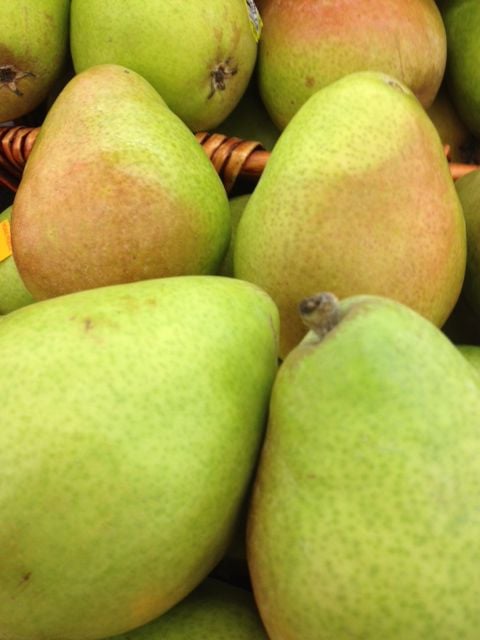 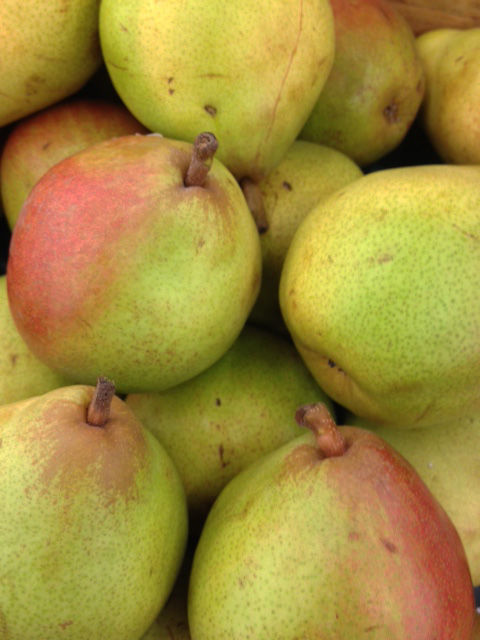 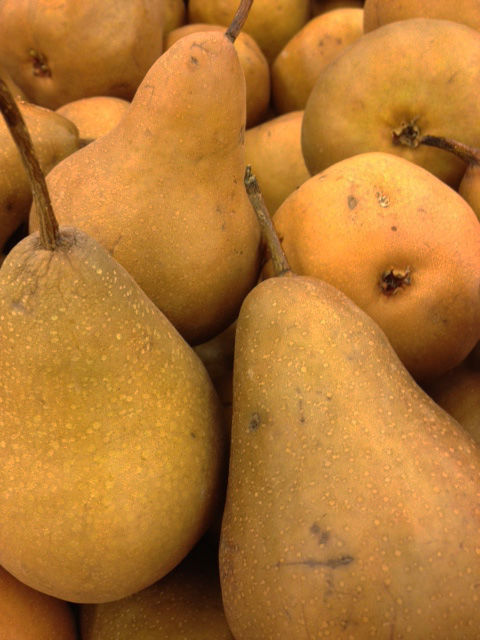 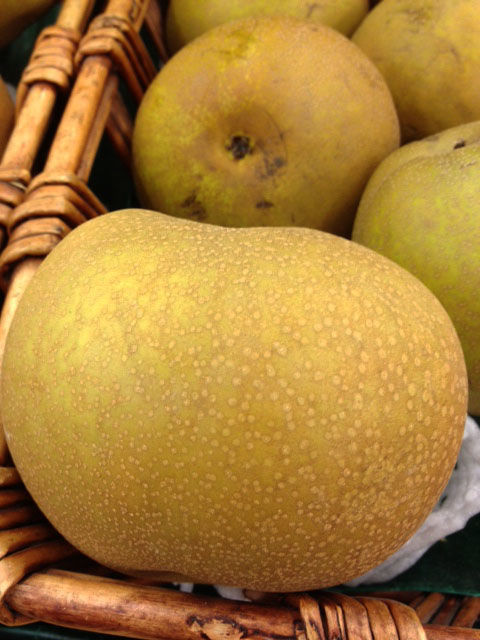 There’s nothing like a little Christmas music to make you think of pears… And, while smooth and delicious, they’ve always seemed the seasonal stepchild of apples. Turns out their origins are close to that of apples – both in the Caucasus – and both belong to the rose family.

The similarities end there. You’ll find many varieties in the markets. Most of us are familiar with the Bartlett, the season opener in early fall. They ripen to a soft yellow and are full of sweet juice. But the varieties below, which I found last week at Sprouts – all for $1.49 a pound except for the Asian pears (99 cents each) – offer their own unique melt-in-your-mouth qualities. Typically, their flavor is enhanced by adding red wine, vanilla, and almonds (often in poaching). They are a wonderful pairing with chocolate or a salty cheese, like parmesan or pecorino.

Here are two great ideas from Facebook friend Courtney Jones: pear tarts with frangipane and caramel on puff pastry and Bosc pears poached in port and served with goat cheese and candied pecans. On Twitter, @LetThereBeBite enjoys pears in salad with Stilton and walnuts. One of her friends sprinkles cinnamon on Asian pears for a snack. @NuttZoCEO adds pears to her apple pies. How do you enjoy pears?

In some markets, the D’ has been dropped but not at Sprouts. Originally from France’s Anjou-Saumur region, these yellowish green, lopsided fruits often have a blush of red in the body and a light skin. Wait for it to give just a little before eating. This variety has the typical gritty texture, yet they’re very sweet, which makes them a winner in salads, baking, and poaching. There’s a red version – Red Anjou – which was discovered in the early 1950s in Oregon and has since been popularized

Comice is the short version of "Doyenné de Comice ("top of the show"). In other words, it’s considered the connoisseur’s pear. It’s a little squat and like the Anjou, a greenish yellow with a red blush. You won’t find any grit in the flesh of these pears, just pure sweet and flowery flavor. They’re wonderful paired with cheese—think Stilton, Brie, and Camembert (in other words, cheeses with a good punch of flavor). Drizzle them with chocolate or caramel sauces (I’m thinking those made by

would be particularly fabulous).  They’ll also hold up well in salads. No surprise, they’re known as the "Christmas pear."

Here’s another pear that complements cheese. Boscs, with their russeted brown skin, are the aristocrats of pears. They have a very dense flesh and are meant to be eaten when firm—so don’t wait for them to get soft. This quality also makes them particularly well suited for cooking, including baking, sautéing, and poaching. They’re also lovely paired with cheese. I’m partial to Boscs with the nutty and aromatic, semifirm Tomme de Savoie, made with skim milk.

Okay, there’s no one Asian pear. Instead, this is the umbrella name for a number of varieties that are firm, sweet, and crunchy. But at a market like Sprouts, you’ll tend to see this apple-shaped variety with russeted skin, known as Nashi, under the name Asian Pear (you can also find them at 99 Ranch Market and I’ve bought them from Lone Oak Ranch’s farmers market booths). And, you’ll often see them cradled in a white stocking because they easily bruise. These are crunchy and juicy with a flowery flavor straight off the tree, so don’t wait for them to ripen. Try grilling these firm pears or add them to salad. One grower I spoke to suggested using them for jam.