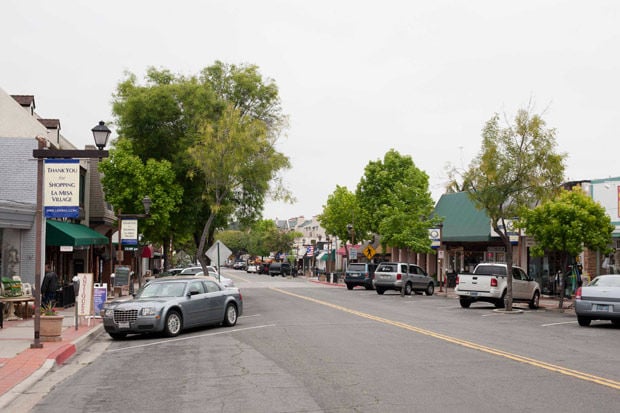 For 100 years, La Mesa—the city that calls itself the "Jewel of the Hills"—has been a culinary desert. Think taco shops ending in "bertos" and failed restaurant concepts like Hamburger Park, which, in the mid-’70s, tried to make burgers healthier by swapping alfalfa sprouts for pickles.

But the arrival of Jeff Rossman’s Terra American Bistro and Brian Malarkey’s Gingham has made the city safe for those who don’t want to eat at Coco’s.

Rossman headed east, after 13 years in Hillcrest, to take advantage of cheaper rent and ample parking, among other perks. "Honestly, competition in the old neighborhood changed with the rise of Liberty Station and North Park," he says. "Hillcrest was so diverse that we thought we could do anything, but we’re experimenting in ways here that we couldn’t there."

"Terra’s actually a block and a half away from the city limits, but we’ve adopted them," says longtime La Mesa mayor Art Madrid.

Who can blame him? The new restaurants might attract visitors beyond the Oktoberfest-loving drunks and college football recruiters hanging out at Helix High.

The city already has 121 restaurants serving 57,000 citizens (including this journalist), but Madrid welcomes the newbies.

"There are a number of people here who appreciate fine cuisine, but it’s been like that always," the mayor says. "When the old Jamar’s opened in the 1960s, we were excited because they were in La Jolla, and we thought we had hit the big time."

That former site is now home to Riviera Supper Club, which opened in January 2009.

Co-owner Sam Chammas, who also co-owns the popular North Park bars Whistle Stop and Live Wire, didn’t expect to end up in La Mesa, but the landlord at his Golden Hill steakhouse, the Turf Club, pushed them out. The old Jamar’s space seemed like a good fit, "with original ’60s features like rock walls, a curved sunken bar, glass mosaics—and a liquor license."

Chammas, a lifelong North Park resident, moved the business and his family to La Mesa.

"Previously, my experiences with La Mesa were car shows, great antique and thrift stores, and parking meters where you got an hour for a dime," says the restaurateur, whose hipster friends starting moving east. "Friendly neighbors, cool mid-century homes, and that cozy downtown were the attractions."

They’re also what attracted Brian Marlarkey, of Searsucker and Burlap fame, to open Gingham a few months ago.

"I grew up in Redmond, Oregon, and La Mesa’s downtown looks exactly like home, without actually going home," Malarkey says.

Then there’s the classics: D.Z. Akin’s continues to be ground zero for matzo ball soup, and family-run Mario’s has been serving Mexican fare for 20-plus years.

As Finley says with hometown pride, "The greatest food in San Diego is grown in East County." Perhaps local restos are finally catching on.