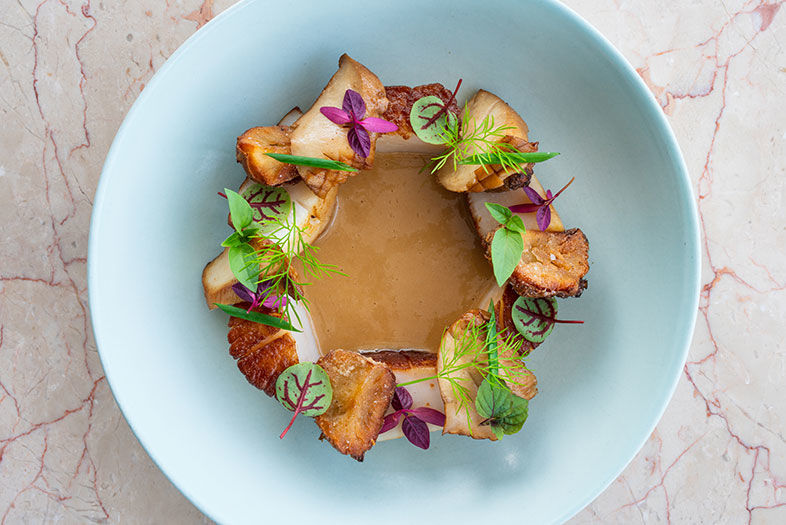 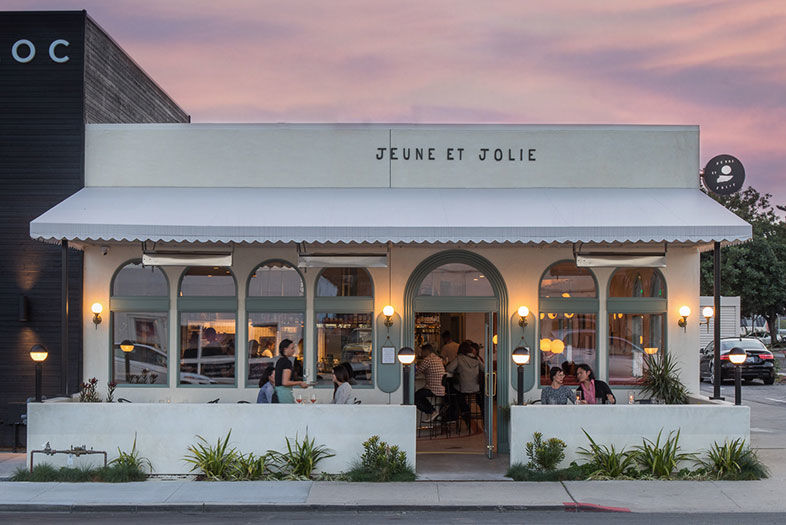 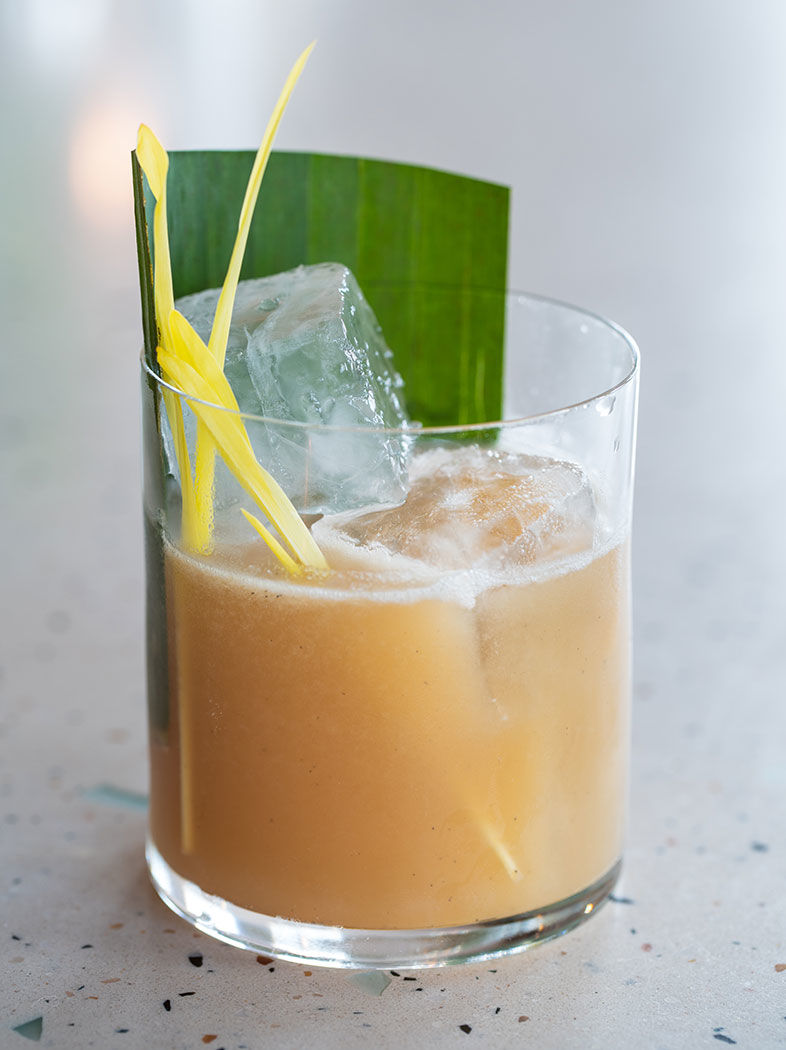 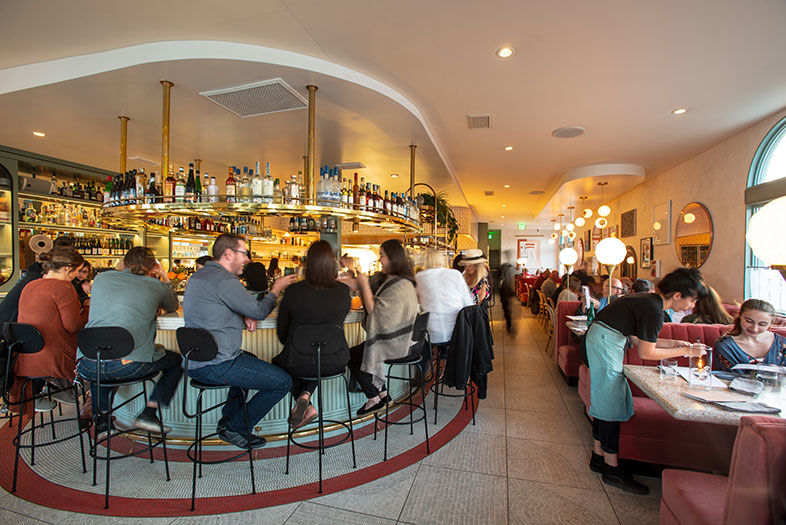 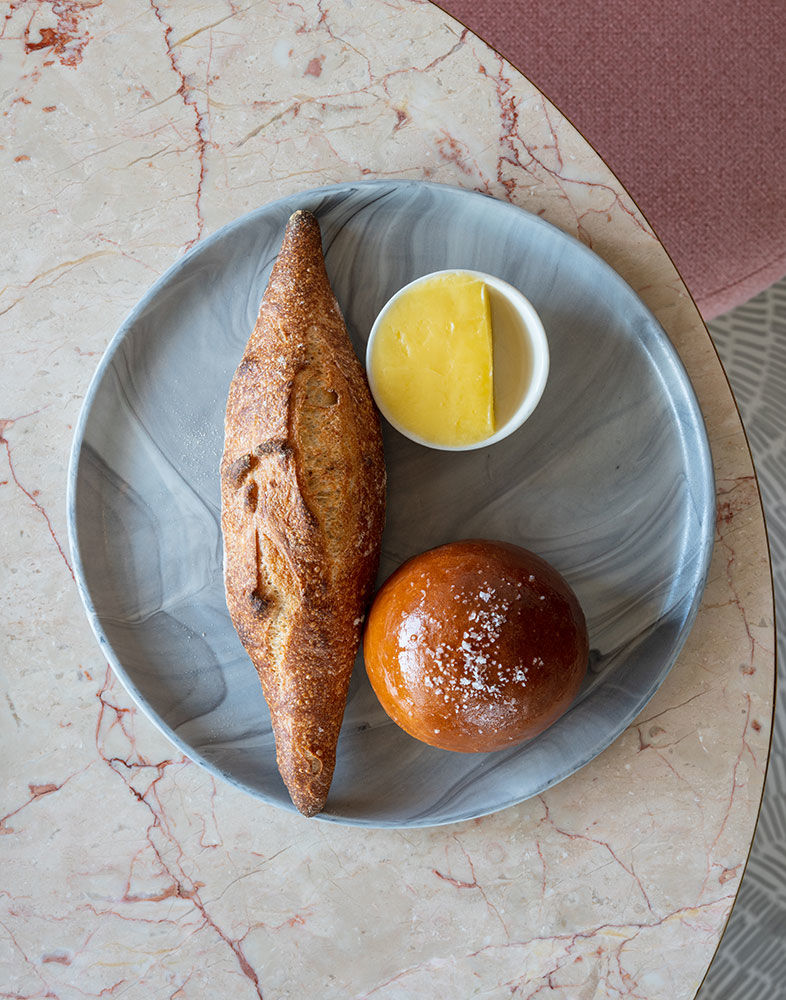 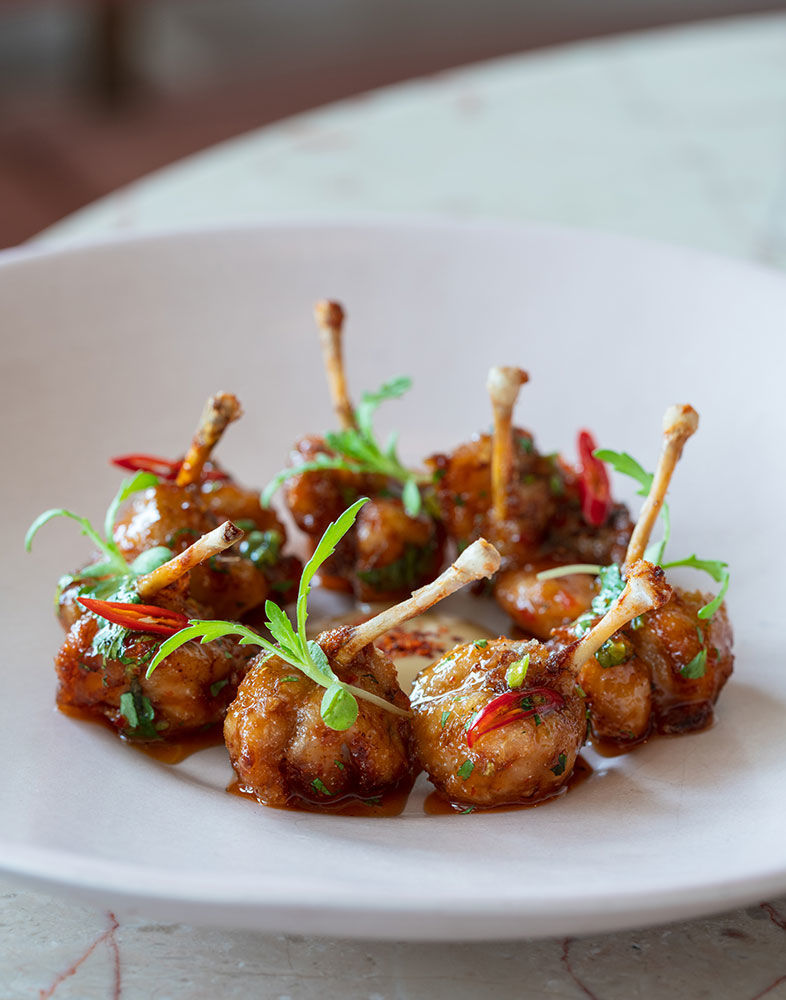 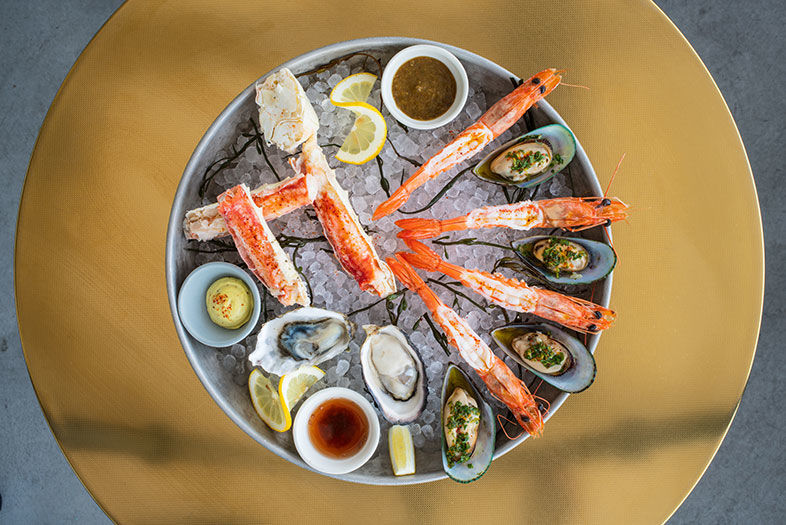 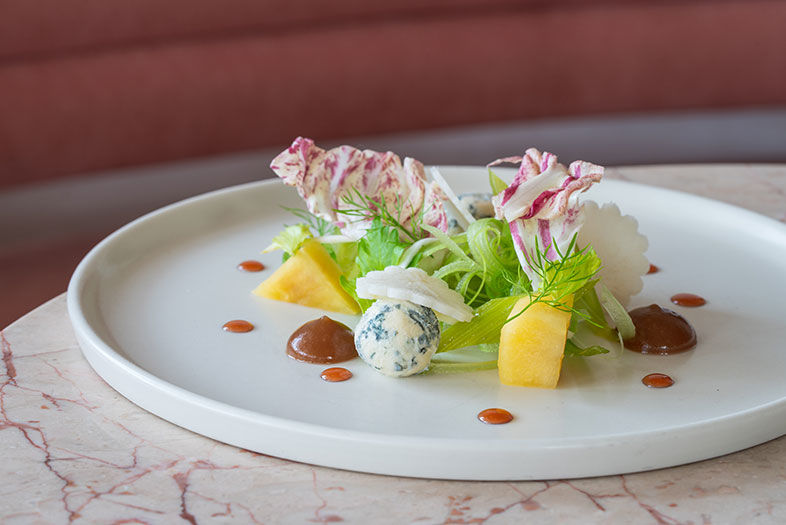 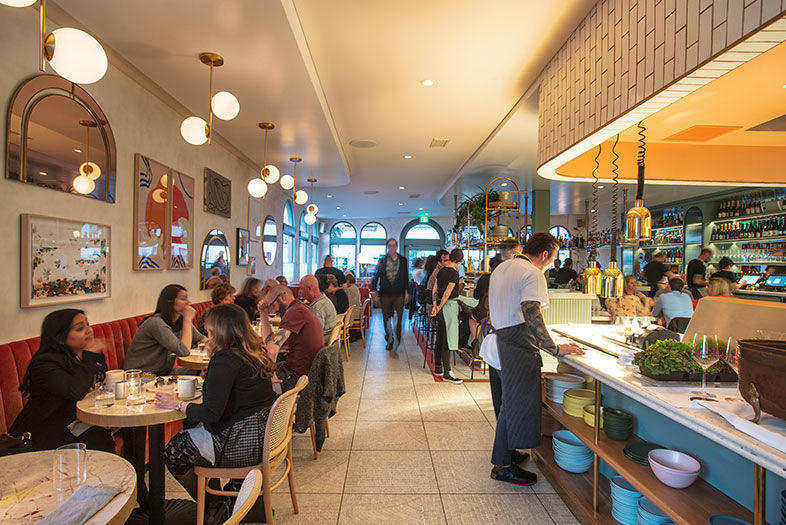 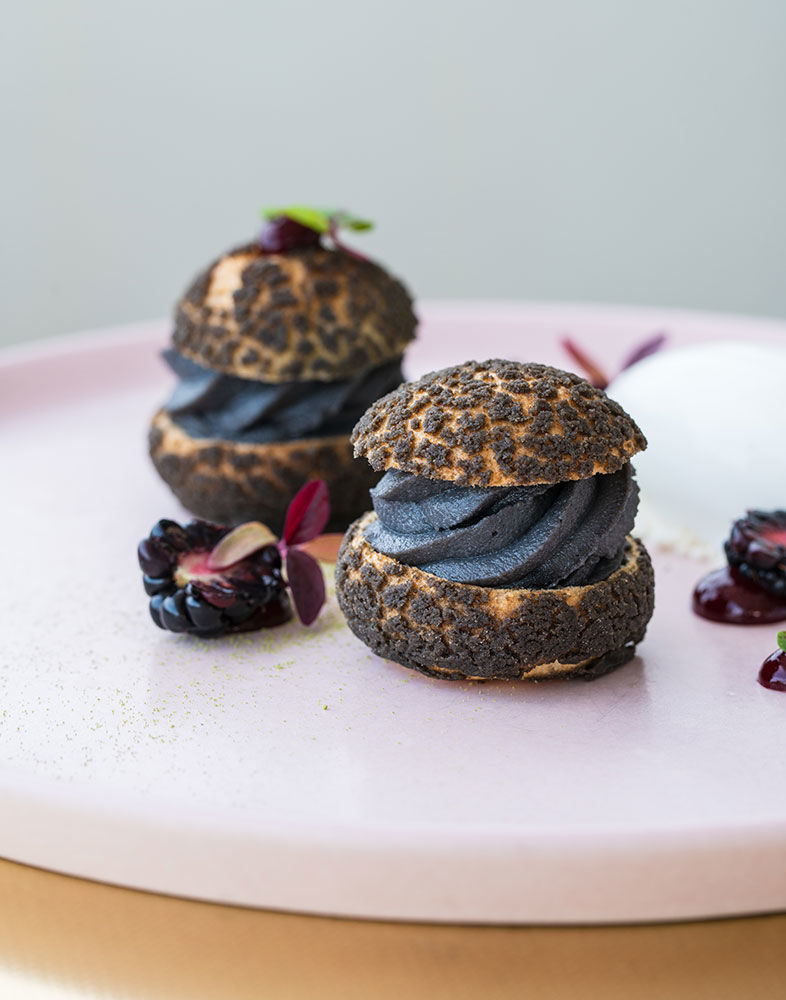 You can see it in the curved arches of the front windows, the gossamer-white café curtains hung on freshly polished brass, the attenuated glassware, the dining room’s lean-close twilight, the booths’ pastel velour (or is it velvet? I’m not good with textiles).

But here’s why this matters: Restaurant design in San Diego over the last decade has been rigidly masculine. The streets are addled with noisome man-caves. It’s incredibly easy to find one with stained concrete floors, decrepit garage doors, hard metal chairs, jagged-edge woods, severe lines, and brooding colors. That’s why when we see a restaurant with a softer, quieter elegance like Jeune et Jolie (or Herb & Wood in Little Italy), it’s so emotionally striking.

This femininity is no surprise, since Jeune et Jolie is named in honor of Elsie June and Margot Jolie, the daughters of owner John Resnick and chef Andrew Bachelier, respectively. The name translates to "young and beautiful," which is an apt summation of the restaurant.

LA-based Bells + Whistles designed it as a modern riff on classic French bistros, inspired by Resnick’s and Bachelier’s travels through the country. Both nights we visited, we seemed to have discovered a secret current of fashion-aware San Diegans. One of the perks of beachside living is being able to dress down forever. But every diner we saw seemed to have opened their closet doors earlier and heard the voices of Anna Wintour and Tom Ford. You get the feeling customers view a night at Jeune et Jolie as an event, a place for the good clothes.

Bachelier spent four years under chef William Bradley at Carmel Valley’s world-class French restaurant, Addison. So he doesn’t come to the cuisine on a lark, even if it seems a pretty big departure from the primal open-fire cooking of the group’s first restaurant, Campfire (located about 200 feet down the street). You can see his commitment to Franco roots in three dishes, especially: the frog legs, the rabbit, and the bread.

Frog legs are almost exclusively French (and Chinese), a famous earmark of the southeastern Dombes region. Americans struggle with the delicacy. We see frogs as creatures to catch while camping, as cursed fairytale princes, as the most traumatic moment of high school science class. But not as food. It’s a shame, because, when done right, frog legs are delicious small bites, and Bachelier does them sweet justice by Frenching the legs (exposing the bones and creating frog lollipops), flash-frying, then tossing in a sweet chile vinaigrette. Drizzle the spicy drumettes with fresh lime, and dip into the emulsion of fish sauce and tamari (a darker, richer, wheat-free soy sauce).

Freshly baked bread is to French meals what freshly inhaled oxygen is to lungs. Jeune serves two kinds—a small baguette and milk bread, both steaming oven warmth. Milk bread is a chef’s ode to the plush-soft wonder that is Wonder Bread and Japanese by roots (Asian influences are all over Jeune’s menu). It’s served with room-temp Normandy butter, which is butter’s ultimate realization of self—richer, intensely yellow, nearly jaundiced. It makes regular butter taste half-hearted, just a notion of butter. Order a bottle of rosé on their patio with this bread, and experience a deep, abiding gratitude for being you.

The rabbit is plated as some sort of grimly playful metaphor. Rabbits are burrowing animals, and here rabbit sausage is "burrowed" into hollowed-out horse carrots, served next to a rabbit crépinette (sausage patty), a delicious cognac-glazed prune puree, roasted carrots, and toasted almond butter—all finished with a rabbit demi-glace.

It’s the sign of an ambitious yet sane menu, listing frog legs and rabbit next to bread and a chicken entrée (a superb young chicken, brined for three days, air-dried for three more, then served with chicken stock and butter-braised marrow beans, preserved lemon, glazed shiitake carrots, crispy artichokes barigoule, and a green garlic béarnaise). It challenges diners to brave the more adventurous French delicacies while also providing them safe words ("chicken" and "bread"). A good restaurant menu offers both risk and routine.

Bachelier’s artful plating gives the decor a run for its money. Produce is cut into ornate shapes, sauces are formed into raindrops and placed just so, each dish pops with colors and textures—especially the salads, which are about as complicated and Guggenheimy as salads can be.

Try the pomme salad with Granny Smith apples, compressed green dragon apples, shaved and confit celery, Saint Agur blue cheese, an apple jam with spices, and baked and mashed Granny Smiths. The fat on the plate is a black walnut butter made from toasted nuts and walnut oil. The pear salad looks like a food topiary, with petal-shaped Asian pears compressed and pickled in vadouvan (curry), a gel of pears (anjou and prickly), Picholine olive salsa, Parmesan fondue, fresh and roasted radish, and a dusting of radish powder. A bitterness from the radish powder makes it nicer to look at than to eat.

The soup best exemplifies Bachelier’s Paris-via-Bangkok narrative, featuring two of Thai food’s biggest food actors, lemongrass and makrut lime leaf (formerly known as "kaffir" lime, but undergoing a name change since that word is a racial slur in some regions). The base of the soup is daikon/potato/leek, done velouté-style (roux and simple stock, resulting in a thin yet satiny opulence), seasoned with kombu, makrut lime espuma (a sciency foam, pioneered by El Bulli’s Ferran Adrià), housemade lobster oil and chiles. Red, green, and milky white, it looks like cereal milk and eats like a thin Thai curry broth.

Every American neighborhood needs running water, electricity, and an oyster bar, and Jeune gives that to Carlsbad. Their raw menu proffers oysters, Alaskan king crab legs, blue prawns, green-lipped mussels, and Maine lobster—all on ice with lemon and a vadouvan curry aioli (a creamy vessel for the best parts of the spice rack). The kitchen would do well to adjust the thermostat for their walk-in, or let the shellfish come to temp just a touch. But left to thaw on the table for five minutes or so, the flavor of the top-quality seafood returns from its arctic slumber, and all is well.

Sweetbreads are a dish whose flavor and creamy texture are as delicious as its anatomical origins are unsettling (pancreas and thymus glands). Bachelier soaks his in milk to mellow, and nearly eliminate, that distinct "organ flavor," then breads them in brioche crumbs, and serves them with smoked apple bacon–braised Napa cabbage and sauce chasseur (a classic French hunter’s sauce). The mushroom duxelle included alongside feels a bit like a ravioli stuffing that’s lost its ravioli.

Deeply flavorful, silken sauces are how French chefs airbrush dishes. A good sauce can elevate well-cooked proteins into the ethereal and carry struggling proteins to a respectable finish. Most of Bachelier’s sauces are stand-alone drinkable—especially the golden raisin–fortified demi-glace beneath his Snake River Farms eye of rib (ribeye with the cap removed). The steak itself is unevenly cooked with a perfect middle and a tad dried out near the edges (suggesting too much sear time). But that sauce is the perfect getaway vehicle for the minor crime.

The best entrée may also be the best thing at Jeune at Jolie. Scallops are perfectly seared and served with crisped sunchoke and roasted abalone mushroom. To cook scallops correctly, you must remove the abductor muscle (a tiny, tough "foot" of the mollusk). Most chefs toss these, but Bachelier roasts them to infuse his vin jaune sauce (golden wine reduction with melted butter and shallots) and the result is one of those dishes that makes life make sense.

For dessert, he riffs on a 50/50 bar, melding mango sorbet with vanilla ice cream and surrounding it with meringue, citrus slices, and star fruit. It’s the light and bright option next to the deeply rewarding choux—pâte à choux (cream puff dough) that’s puffed, halved, and stuffed with black sesame crémeux (pudding), then laid atop blackberry puree, macerated and fresh blackberries with a yogurt ice cream providing relief.

It’s as if Jeune et Jolie expresses one chromosome and Campfire the other. And both have enough idiosyncratic charm to kickstart a minor revolution on State Street.