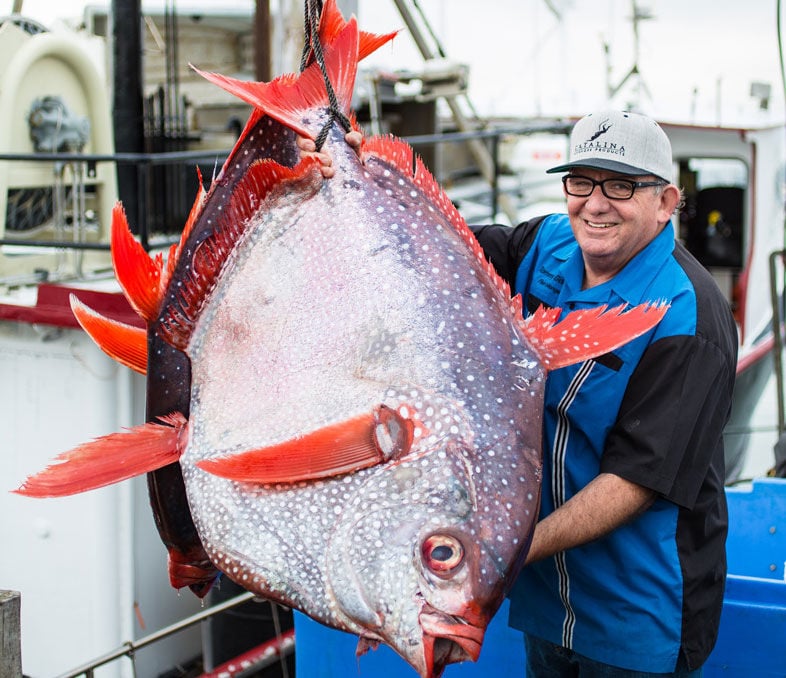 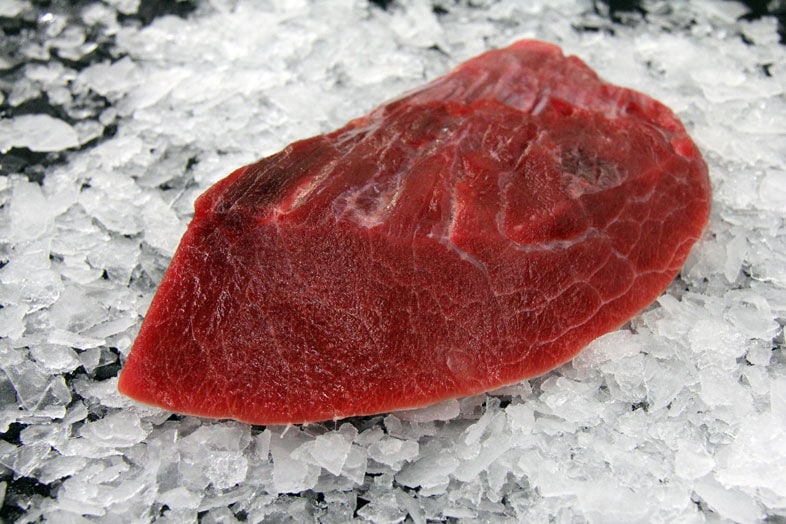 Eat the whole fish. Or at least try something other than the fillet. Also, tuna is not the only fish in the sea.

That’s essentially the message local seafood company Catalina Offshore was just granted $139,700 to get across. Specifically, they’ve been given the money by the National Marine Fisheries Service’s Saltonstall-Kennedy Grant Program to spread the gospel of opah, aka moonfish.

Why? Because the US needs fish like opah. We’ve got a chronic shrimp, tuna, and salmon habit. Twenty-eight thousand species of fish in the world, and American consumers largely refuse to eat more than a handful. That creates a huge demand for these "comfort fish." To meet that demand, the US has to import seafood from overseas, often from boats fishing unsustainably or illegally.

No matter which way you bend or twist the numbers, the conclusion is the same: Our oceans are overfished. According to the UN, 52 percent of the global fish stocks are "fully exploited" (operating at maximum yield), 17 percent are "over-exploited," and five percent are depleted. Over 90 percent of our large predatory fish are gone. One billion people worldwide depend on seafood as their primary source of protein.

The United States used to be part of the problem, but now they’re the world leader in sustainability. Since the Magnuson-Stevens Fishery Conservation and Management Act was signed 42 years ago, American fishermen have largely eradicated overfishing and helped 39 species recover to sustainable levels (even bluefin tuna is close to a full comeback).

Now that American fisheries have become the example of how to fish for the future, they want to go further. They want you to give opah a shot. Not just the fillet. The whole thing.

Opah is a bycatch—meaning it’s inadvertently caught while boats are fishing for tuna. Bycatch is perfectly good seafood—excellent, even. But Americans don’t know what the hell an opah is. So they don’t order it. Without a market for it, fishermen are forced to use it for lobster bait, toss it overboard, or in the dumpster.

"In the US we grew up with Gorton’s. We need to reeducate the public."
—Tommy Gomes, Catalina Offshore

Catalina Offshore owner Dave Rudie and head fishmonger Tommy Gomes started trying to help fishermen sell opah five years ago. They lead the national movement toward the fish. They’ve had success, and for good reason. Opah is mild and easy to love. I’ve had it prepared dozens of ways, each delicious. Some call it a cross between tuna and salmon. It’s a massive fish, big as a car tire, with a wide variety of meat.

"It’s like seven fish in one," says chef Davin Waite, who serves it at his Oceanside sushi restaurant, Wrench & Rodent. Opah’s unique because it has three distinct kinds of meat: The meat behind the head and along the backbone is orange; the belly area is more pink; and the abductor muscle eats like pork, chicken, or beef.

"Opah is partially warm-blooded," says Rudie. "Around the head and the abductor muscle that keeps its body warm, the meat is more like a land animal. There are bones in there that are good for soup and stocks. Opah has this fatty layer that I’ve seen Tommy slice up and fry like French fries or chicharrones. It’s a good fish fat."

"If you want it to be sweet Italian sausage," explains Gomes, "all you gotta do is add the sweet Italian seasoning to the abductor muscle and brown it up. We’ve come up with recipes with the help of local chefs like Chef Hanis [Cavin] at Carnitas’ Snack Shack, who started making pastrami. I took it to D.Z. Akin’s and the old man said, ‘This is great pastrami.’ I told him it was opah and he nearly had a heart attack."

Rudie and Gomes have been able to get a few dozen local chefs to buy into the fish, who in turn have convinced their diners to give it a try. Now they’ll try to address the other part of the problem: Americans only eat the fillet.

In Latin American and Asian cultures, chefs and home cooks use lesser cuts to make signature dishes (tender beef cheeks, grilled yellowtail collar, fried chicken feet, chicharrones, etc.). They see it as sacrilege to waste any part of an animal, for philosophical and economic reasons. Americans have enjoyed the dubious luxury of just eating the fillet and letting industry deal with the rest. Without other options, fishermen are forced to use it as bait or put it in the landfill. In light of overfishing statistics, that’s impossible to justify on any ethical level at this point.

On an opah, the fillet represents only 23 percent of the total meat. That means over 70 percent of each fish is uneaten, and much of it wasted. Catalina will use that grant money to try and convince Americans to eat the rest.

"We need to reeducate the public," says Gomes. "In the US we grew up with Gorton’s. We want four-ounce fillet, bloodline out, with no skin. To me, that’s a piece of chicken."

Waite is using opah bones for broths, and the abductor muscle for zuke (a marinated sushi dish, usually done with tuna). Over at Mitch’s Seafood, chef Mitch Conniff makes opah corn dogs out of the abductor muscle. Saiko Sushi chef Anthony Pascale made a bold move and replaced all albacore with opah at both of his locations.

"We really try to focus on wild-caught, local fish, and there’s really no local, wild-caught albacore in San Diego anymore," says Pascale. "This is a local fish, caught two days ago, on this boat, by this fisherman. It didn’t go on an airplane."

Gomes says getting chefs to play with the different cuts isn’t the problem. "Anytime you put something new in front of a chef, they’re all about it—that’s what they do. We need the American public to eat it."

Or they have to do something like hot dogs, which were invented to get the American public to eat the less sexy parts of beef and pork. "Maybe we’ll have to make some opah hot dogs," Rudie jokes.

Catalina plans to work with chefs to develop recipes for the non-fillet meat. They’ve also teamed with the Southwest Fisheries Science Center to study opah’s reproductive patterns and migratory behaviors. The whole idea of eating a sustainable fish, after all, depends on ensuring that fish reproduces and thrives and remains sustainable. They’ll also study other bycatch, as well as the discarded parts of popular fish, and attempt to get chefs and American diners to cook and eat it.

"Like the heads of tuna that are used as lobster bait," says Rudie. "There are so many other bycatch fish, and we need to find ways of utilizing their potential."

"There’s always going to be bycatch," says Gomes. "Every time you put a hook in the water, you’re not going to always get what you want. The US Fisheries management is about reducing bycatch, and using it sustainably."

So, give opah a try. No shame if you start with the sexy fillet. If you enjoy that, move on to the other cuts. Here are a few places around San Diego to give it a shot:

Chef Davin Waite: "I love opah because of the diversity of cuts. The bones are great. There’s something about them that makes a broth creamy."

Chef Brian Redzikowski: "The opah belly is something different, and not too many people are using it. It’s very versatile and can hold up to a lot of different preparations and flavor profiles."

Chef Anthony Pascale: "Just like the classic miso-marinated black cod. We marinate it for three days in miso, sake, and sugar. Turns out really nice."

Chef Angelo Sosa: "Opah is a dynamic fish. It’s got a rich and meaty flavor, yet soft and creamy texture to it that is amazing for sashimi, crudos, and ceviches. We use it in ceviche with tiger prawns, pineapple, and heirloom tomatoes."

Chef Jeff Rossman: "The belly has a ton of oil and can be cured like bacon. The abductor muscle is a great hearty meat substitute and makes a great chili. And the loin is super-red like ahi and rich, for an amazing entrée."