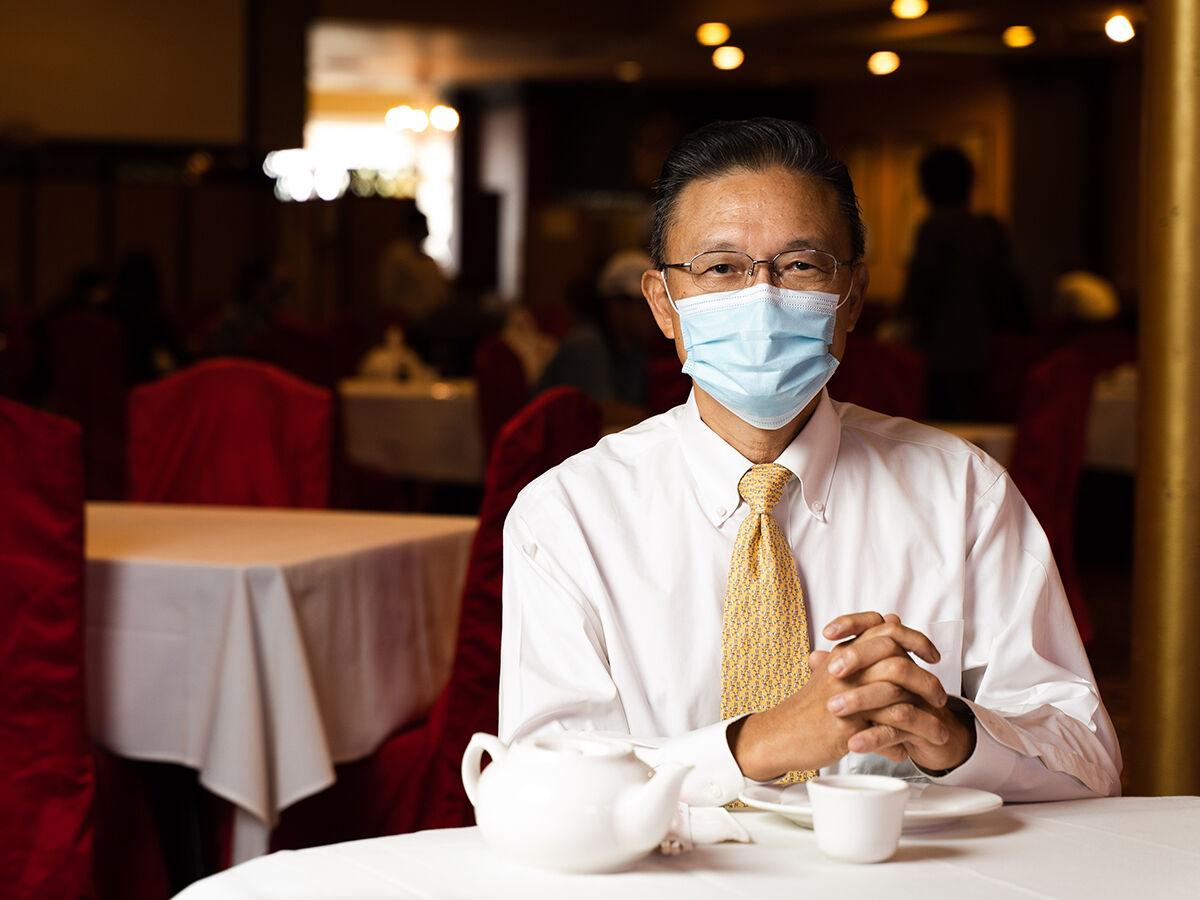 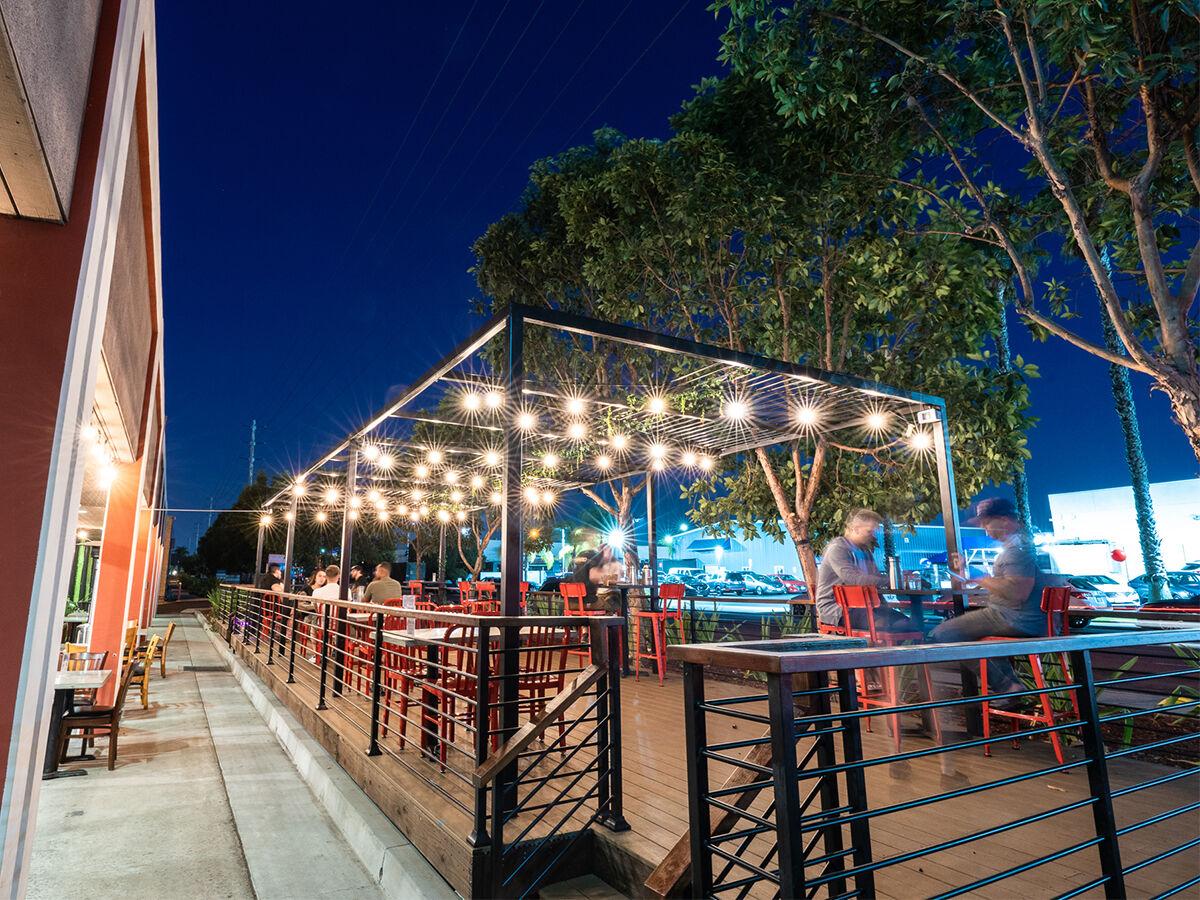 The patio at Common Theory 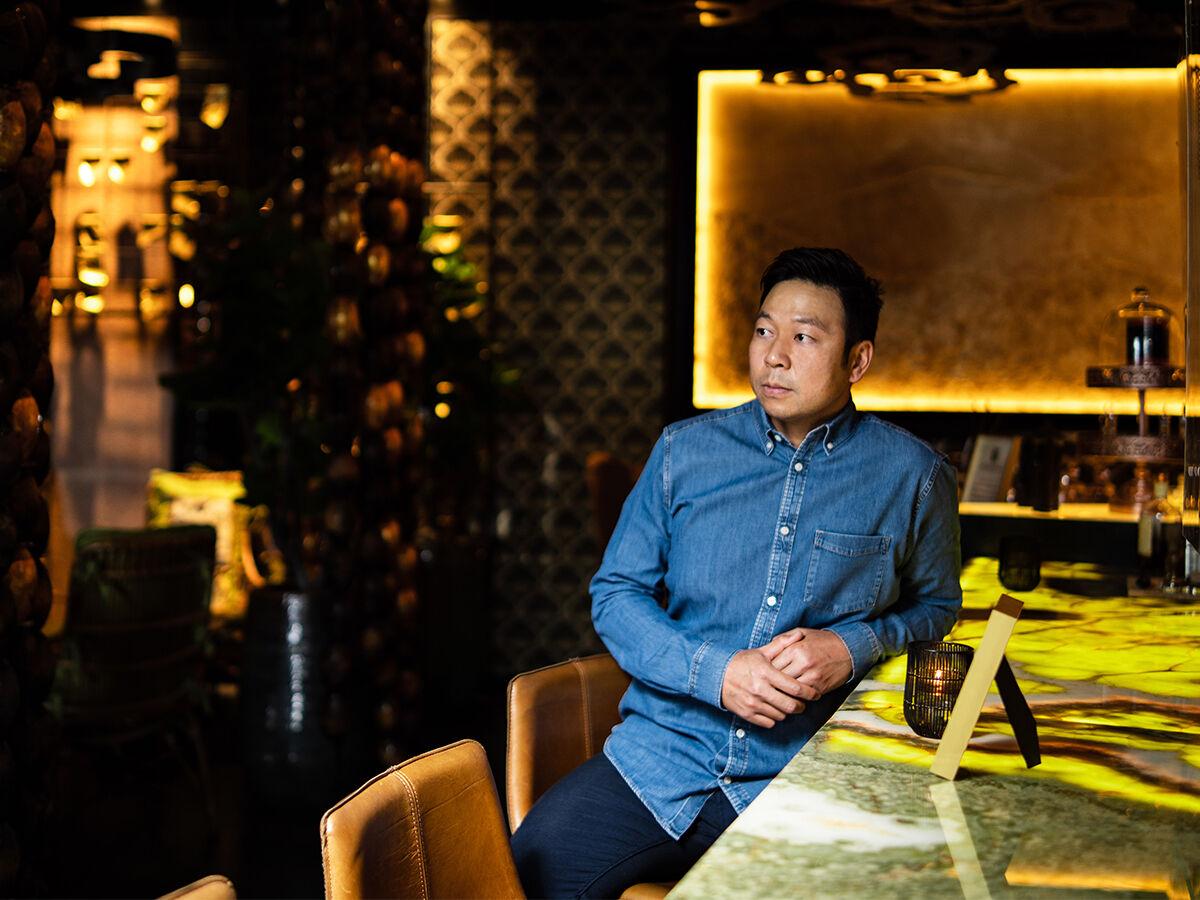 Cris Liang opened a speakeasy, Realm of the 52 Remedies, inside his restaurant Common Theory, which garnered acclaim for its design but has been unable to seat guests indoors. 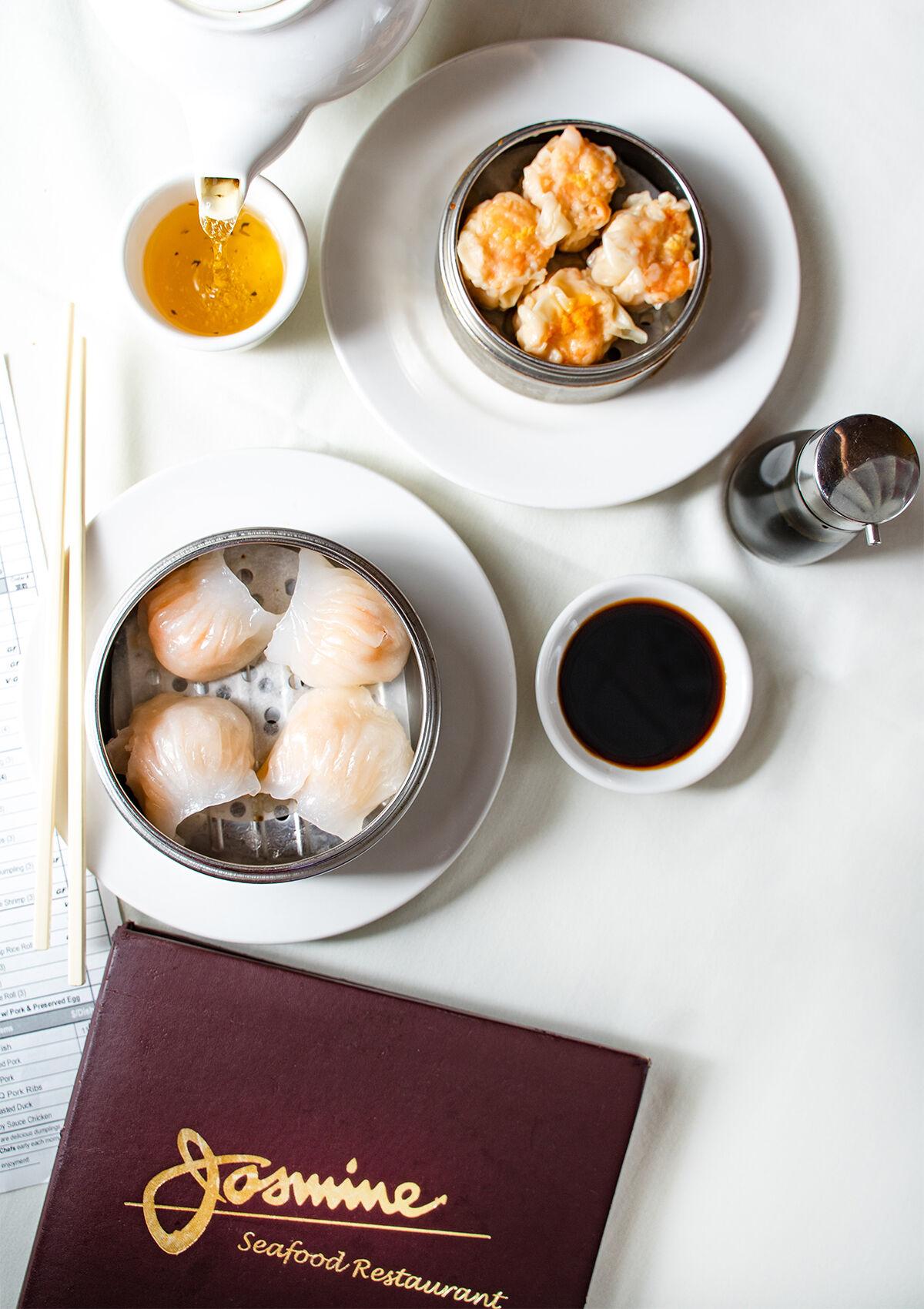 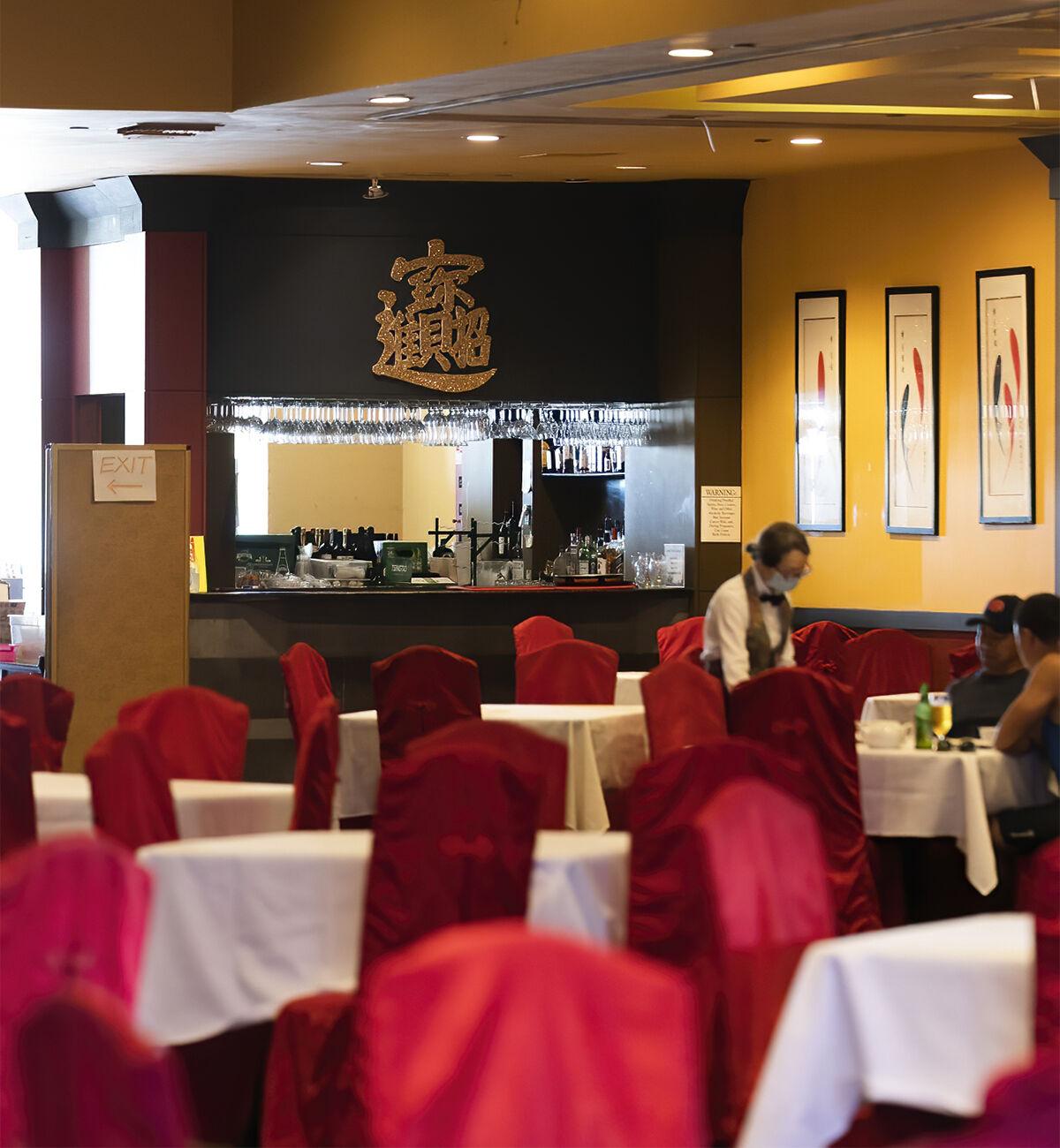 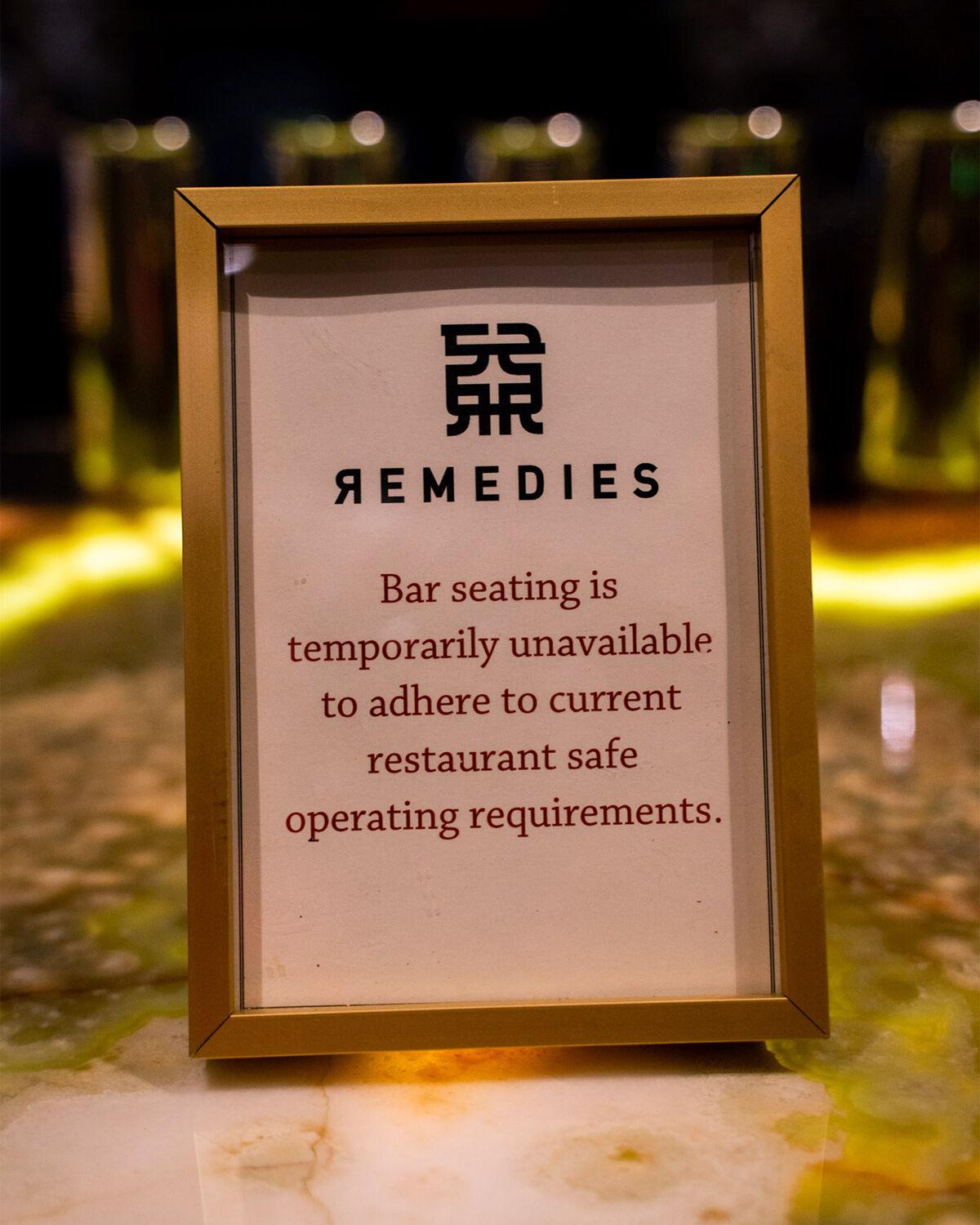 A sign at the bar inside Realm of the 52 Remedies

Most of us remember the day the WHO officially declared it a pandemic. March 13. I was eating scrambled eggs at a tiny, not-overly-clean diner in Big Bear. I remember tunnel-visioning on a mountain woman who coughed repeatedly, billowing her invisible mist we’d later learn to call “droplets.” It was the first time I felt the impact of virus fear.

Back in San Diego, parts of the Asian restaurant community had been feeling it for months.

The novel coronavirus was first identified in Wuhan, China, on December 31. It was found in a “wet market,” whose wares include exotic meats for human consumption. Not long after, some restaurants in San Diego’s iconic Asian food hub, the Convoy District, noticed a lot of empty chairs. People didn’t know much about the virus at the time. They knew they didn’t want it. Assumptions and theories were made, most of them predictably poor. Some people just wrote off Chinese food entirely. Some cast the fear net a little wider, avoiding all things Asian.

On February 4, Dr. Allen Chan stood alongside San Diego city officials in front of his dim sum restaurant, Jasmine Seafood. They correctly made the case for the assembled media that associating San Diego’s Asian restaurants and businesses with the virus was rooted in paranoia, not facts or science. Local shop owners were hurting, so please rethink. The day of the press conference, there were 11 confirmed cases of COVID-19 in the US.

“I think it was unintentional discrimination,” Chan says. “People weren’t hating Chinese people, they were just afraid of the virus.”

“Lots of people were avoiding dim sum places, especially,” says Wesley Quach, a director of small business development at the Asian Business Association (ABA). “I don’t think it was racism. It was misinformation—even in our own community. At the time, people actually thought you could get coronavirus through Chinese food. The press conference was to say: ‘We’re Asian American, we live here in San Diego, the majority of us haven’t even been to China recently.’”

About a month later, all San Diego restaurants were forced to shutter. By that point, Asian restaurants across the US had gotten a grim head start on the economic fallout. On April 15, CNN reported that of the 270 restaurants in New York’s Chinatown, only 40 remained open. San Francisco’s Chinatown went from about 150 to 40. National media also began reporting scattered but disturbing attacks on Asian Americans.

“In December there was a lady on an NYC subway wearing a mask and someone was freaking out and calling her diseased and attacking her,” recalls Quach. “In Texas an Asian family was attacked in a Costco by someone with a knife who thought the family was infecting people with coronavirus. Whenever an incident happens, it usually circulates in our Asian American social media [community] a day or two before it hits mainstream media.”

I spoke with Quach for an hour about the current state of the Convoy District restaurants and he never brought up those stories. I had to call him back and ask him about it when I came across this research: Over the course of five days in March, a national online reporting center documented 1,135 reports of verbal harassment, shunning, and physical assault against Asian Americans and Pacific Islanders across the US. California had the most cases. Quach admitted he felt the fear a little, still does—not so much for himself, but for his grandparents.

The four Convoy restaurant owners I speak with all say they haven’t personally experienced harassment. Chan says some customers did, though, and it made them cancel some dinner plans. The language surrounding the virus often doesn’t help—specifically when certain politicians and media outlets refer to it as the “China virus” or even more derogatory terms. Neighbors around here felt each one of those.

In fact, language has been a daily obstacle for some. What makes Convoy such a rich cultural attraction is the wide array of restaurants from first- and second-generation Asian Americans. They’re not all fluent. And as the rules and regulations of the pandemic change hour to hour, the advantage goes to those born into English.

“It continues to be an issue,” says Quach, noting that the ABA assembled an outreach team to go to local businesses with flyers, updates on grants, and temporary permits. “Almost every week the FAQ about PPP money was updated. We have translators, who are mostly volunteer board members or paid. COVID has helped us improve our process. One thing that’s great

Jasmine was doubly affected because dim sum—with carts of food going table to table—is considered a buffet, which have been completely shut down under California guidelines (this even forced Souplantation into bankruptcy). Chan had to remove the carts and retrain his staff.

“It takes a lot more time to serve a table,” he says. “Normally people just look at a cart and can see what’s in there instead of looking at a paper. We’ve come up with a dim sum menu with photos. Hopefully it’ll gradually get back to normal.”

It’s hard to overstate how vital the ritual of dim sum is in the Asian community. Everyone is missing someone during the pandemic. Isolation is the ordeal’s universal ache. Dim sum has always been a social glue.

“Dim sum is a family tradition—two, three generations dining out with grandchildren, great-grandchildren who get to see their grandparents and cousins,” Chan says. “It’s a big trauma. We have customers from different ethnic groups, mostly Asian but especially Chinese. They are the ones who take COVID very seriously and are not coming out.”

What Chan is saying—and this is echoed by all business owners I speak with—is that having a predominantly first-generation Asian clientele during a pandemic is especially tough because Asian cultures tend to take public health very seriously.

“I think that was part of the initial downturn—Asian people themselves not wanting to go out,” adds Quach. “Places like Japan, China, Korea, if it’s the flu season, people wear their masks. When they wear a mask, it doesn’t mean ‘I’m sick and don’t want to get you sick.’ It goes both ways. ‘If we all wear a mask, we’ll reduce the chances.’ Over there, it’s more densely populated. Here in America—and I’m not saying one way is better than the other—we’re more individualistic.”

Cris Liang—owner of Common Theory, Realm of the 52 Remedies, and Woomiok—suggests that China’s recent history also plays a part. “When it comes to pandemics, people from China especially have been there, they’ve suffered,” he says. “They know this isn’t BS. Better be safe than sorry.”

Joon-Suk Kim has owned and operated Tofu House for 25 years. He thought, like most of us who are better optimists than epidemiologists, that the dining restrictions would last just a few weeks. “We didn’t estimate it would go over a year,” he says, rattling off several high-profile restaurants across the country that have closed. “My PPP money ran out about two months ago. Friends decided to close a couple of restaurants in LA after 45 years. When they decide to close I am very afraid, too.”

Tofu House focuses on traditional Korean stews and soups served in hot stone bowls, which don’t translate as well to a takeout model. “Not like chicken or pizza,” he says. “It’s a very different food—boiling, frying, meant to be served at high temperature.”

Kim has set up outdoor dining in the parking lot. Along with the currently allowed 25 percent indoor capacity, he estimates they’re doing 60 percent of normal sales. His employees have dwindled from 15 to four.

“No, we are not okay,” he says. “Winter is coming. I worry the customers won’t come eat outdoors in 50-to-60-degree weather. Then the other issue will be the seasonal flu.”

At Common Theory and its attached speakeasy, Realm of the 52 Remedies, Liang is also preparing for winter. He just spent good money installing a handsome wooden deck with a pergola. “I’m trying to grow some hops for shade,” he says. “Hopefully we can harvest it down the road and do a wet hops beer.”

Liang’s problem now: He can’t source any outdoor heaters. He laughs, has a good attitude about it. We’re all used to things being out of stock now. Those who acted fast, like Dumpling Inn, were able to get clear shower curtains to use as sanitary dividers between tables. Other restaurants had to settle for shower curtains with cartoon characters. Pandemic supplies are also highly marked up, because capitalism never stays home. When hand-sanitizer stations hit $200, people started making their own using two-by-fours.

Thanks to the work of the Convoy District’s businesses and the ABA, the neighborhood had been swelling in popularity before the pandemic. You expect to hear that’s on hold now, but Quach says he still feels it. So far, there haven’t been many restaurant closures due to the virus. Parking was always an issue, but they added about 200 angled spots. The strip mall lots are filled with huge white canopies and tents strung with lights, reminiscent of the Night Market events they held before COVID-19.

“I think one benefit with outdoor dining is that it exposes their food, the smell of their cuisine, to people who otherwise wouldn’t have gone inside to eat,” says Quach, noting that the state just added ‘Convoy Pan-Asian Cultural District’ signs to nearby freeways. “The spirit is there.”