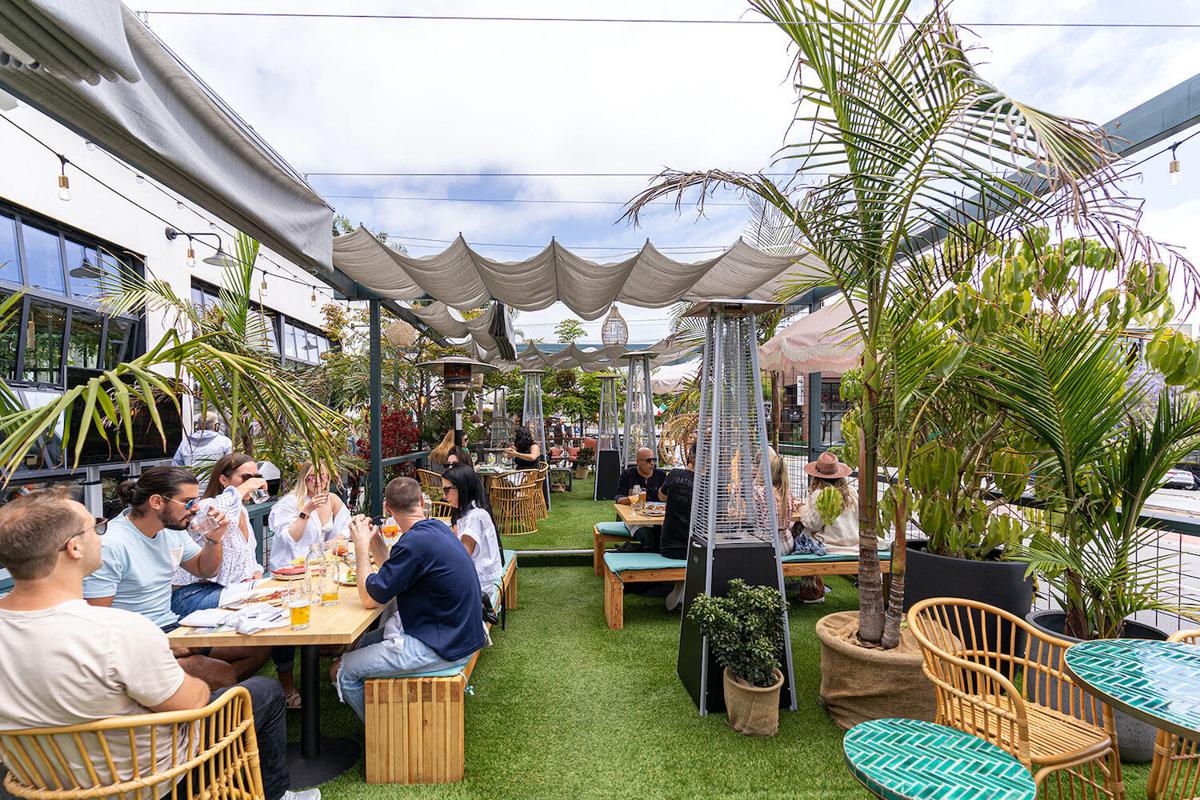 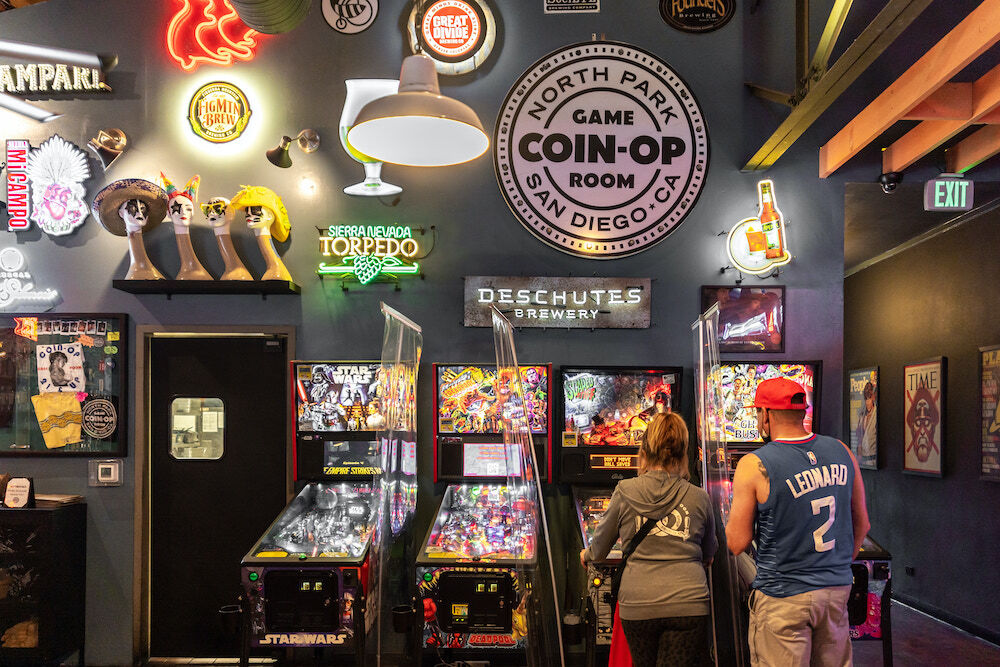 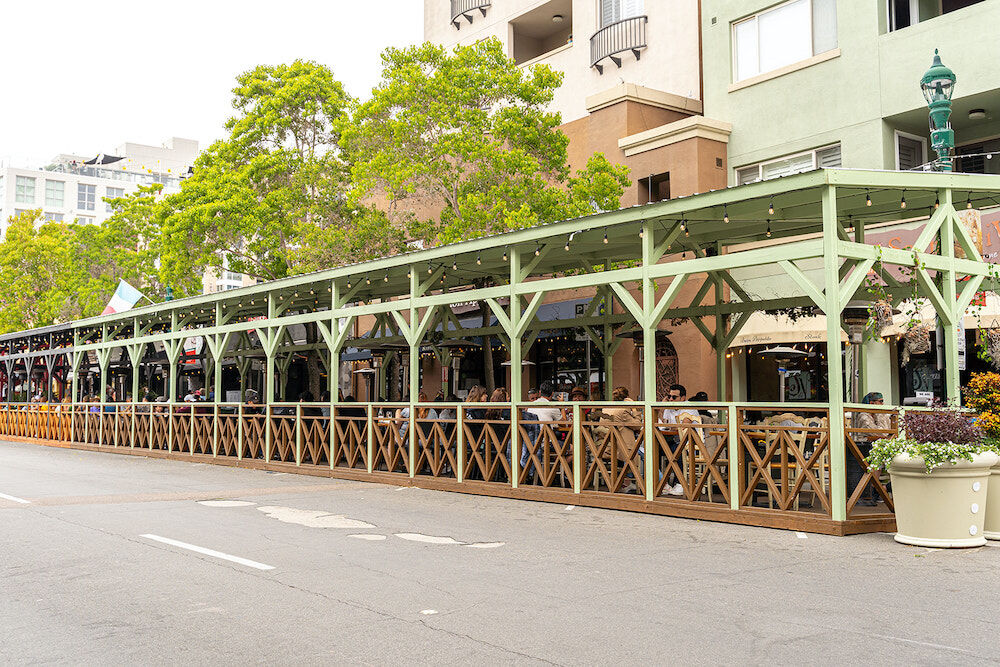 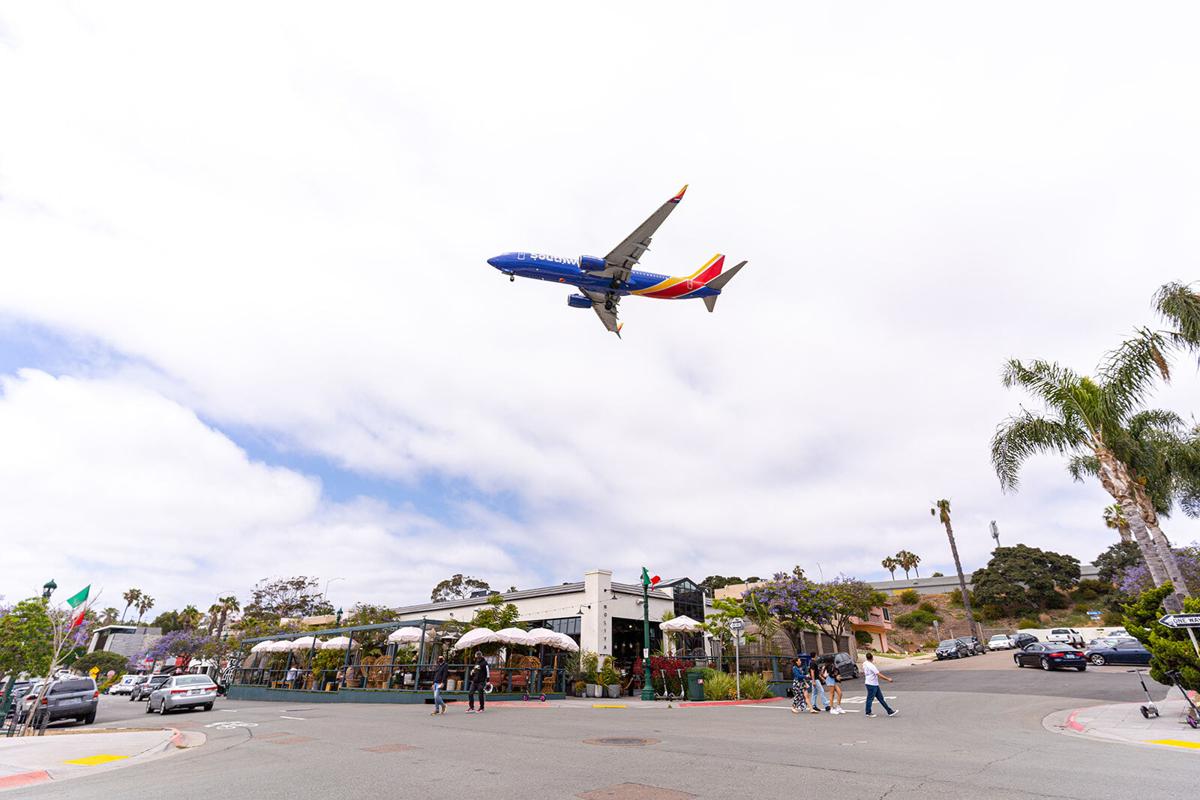 Little Italy’s parklets are a lovely place to dine, if you don’t mind the screaming jet engines 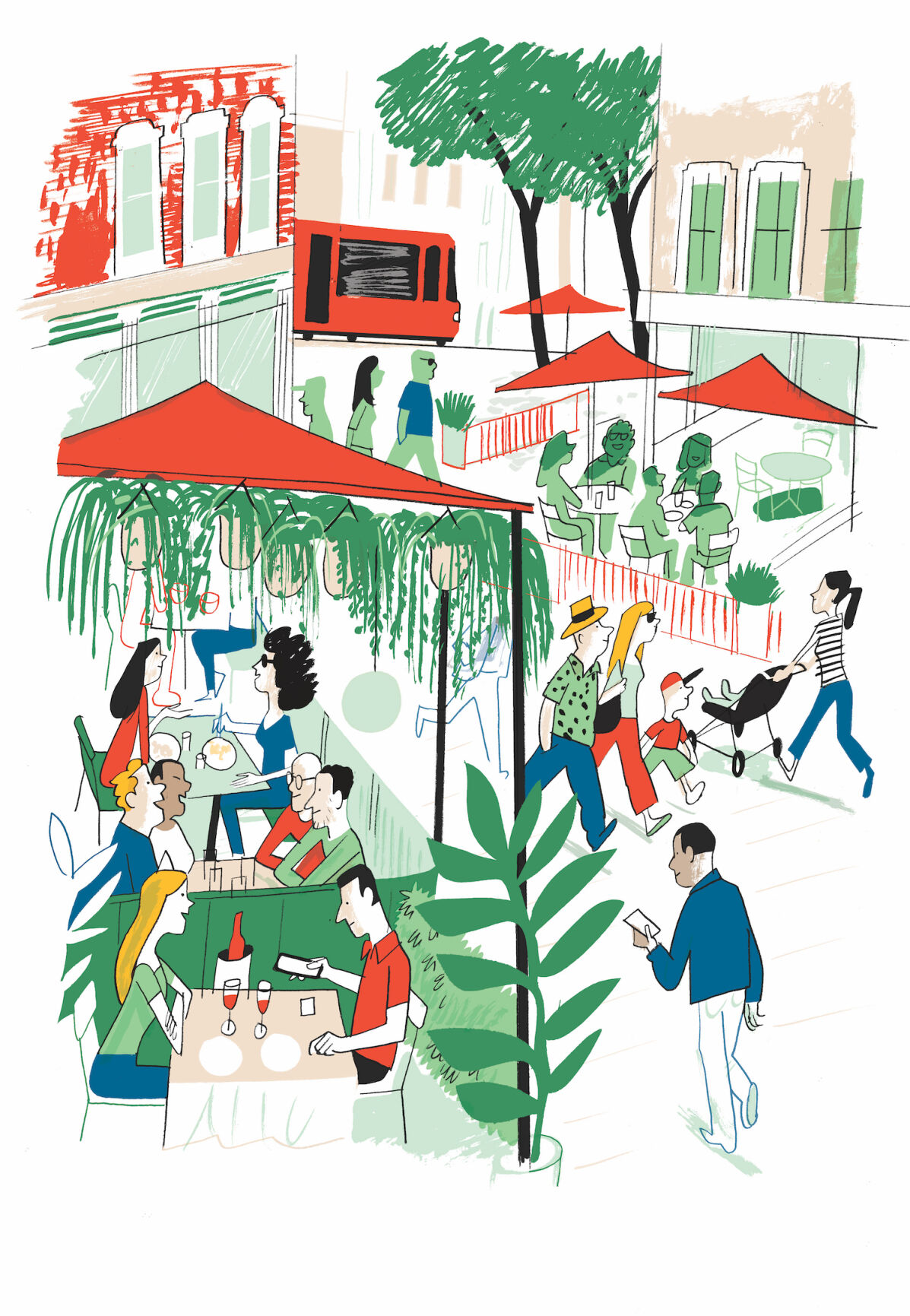 To survive, starfish invert themselves. They send their stomachs outside their body to collect sustenance. During the pandemic, American cities allowed restaurants to starfish. They turned their operations inside out, transforming parking spaces into outdoor dining nooks. Now, the streets are filled with ad hoc decks and patios with tables, heat lamps, and decorative plastic ivy. Very fine chicken dinners are being eaten over gutters. Parts of town look like block parties that never ended. Many neighborhoods—Little Italy, Gaslamp—stopped allowing car traffic to some degree, creating pandemic promenades.

The idea was that these parklets would be temporary salves (parklets have been allowed since 2013, though few restaurants opted to build them). But over the last year, some owners built impressively elaborate installations costing tens of thousands. And now they might not only be permanent, but also change San Diego at its core.

Locals fell in love with this new alfresco city, where the streets bustle with humans instead of Hondas. Why eat indoors in a climate that doles out over 270 days of bathwater-warm sunshine every year? Plus, local restaurants need that bonus square footage to recoup losses (the financial blow of 2020 will linger long after the pandemic is over), and some diners won’t be enthusiastic about eating indoors for quite a while. This is partly why the city council voted in May to extend the emergency ordinance, allowing these parklets to stay until at least July 2022. They essentially gave this grand experiment another year to play out.

“For a lot of businesses, the pandemic is not yet over and will  not be for a long time,” says Elizabeth Studebaker, assistant deputy director of economic development for the city of San Diego. “The community at large needs to realize we need to continue to be patient and support each other. That’s what this effort is—extending the ordinance while the pandemic is still ongoing.”

On the highly journalistic, impartial forum of my Facebook page, I asked whether San Diego should keep the parklets and street closures, and for how long. I received a flood of 166 comments, almost every single one a resounding “YES!” Some said to keep them forever and become Paris West. Some said to give them a shot for a period of time. Sure, my part of the internet tends to be pro-restaurant, and it is very en vogue to be supportive of small restaurants right now. But the sentiment has a track record: In Palo Alto, a survey revealed that 96 percent of residents wanted to keep the expanded outdoor dining and two of their main streets car-free indefinitely. In March, San Francisco’s mayor moved to make the city’s parklets permanent; LA’s city council followed suit in May. Up in Healdsburg, parklets will be around until at least 2023.

In their improvisational efforts to stay alive, restaurants catalyzed the long-simmering revolution of pedestrians against car culture.

It may smack of utopian hyperbole. All of us, strolling the asphalt of Fifth Avenue with our gelati, jaywalking back and forth across India Street dripping crema from our travel tacos, restaurants curing the nation of its fossil fuel addiction, reversing global warming, and giving the polar bears they save names like Thomas Keller.

It also sounds a little true. Estimating based on public sentiment and the city of San Diego’s efforts to help restaurants do this correctly (they’re granting small loans to bring parklets up to code)—it seems that responsibly designed parklets will stay permanently. A few marquee

streets will close to all but essential vehicles and become pedestrian-only promenades. And restaurants will be largely responsible. Of course, this  little utopia isn’t without its significant problems and challenges. First, in extending the ordinance, city authorities made it very clear that they are done overlooking code violations.

“The city has shown a lot of flexibility, but that time of flexibility and understanding with the worst code violations will be coming to an end very soon,” Studebaker told me back in May. “We want to help them comply, but we can’t continue to look the other way.”

To start, every parklet must comply with the fire code. Simply put, parklets put a rather large obstacle between firefighters and buildings that are on fire.

"For a lot of businesses, the pandemic is not yet over and will not be for a long time."

“Our concern is, every minute a fire burns it doubles in size,” explains fire marshal Doug Perry. That’s why response time is the benchmark for measuring fire safety. Parklets force fire trucks to park farther away from tall buildings (over two stories). From that distance, the truck’s ladder—instead of being able to extend upward at the ideal 70-to-80 degree angle—has to be tilted more horizontally, which makes it more like a hazardous catwalk. Second, parklets with railings built too high (over 30 inches) block firefighter access. “With a shorter rail, it’ll take us less than ten seconds to hop over it and push everything out of the way,” Perry says. Finally, outdoor dining means an arsenal of propane heaters. Many restaurants are simply storing those tanks inside the front door—but the fire code dictates they must be stored in a specialized room with proper ventilation.

“If our people come in at three in the morning, we’re not expecting to see ten propane tanks,” says Perry. “That’s our greatest fear, to be honest with you. The propane tanks are designed not to explode.  They’re going to vent. But all that gas leaking out means you’ll have a large, very intense fire.”

It’s equally critical that every parklet comply with the Americans with Disabilities Act, by not blocking sidewalks or making it harder for anyone to navigate the city. Creative minds are at work on solving the danger of dining in traffic (by closing streets to cars, making them one-way to provide more driving room, adding barricades, and so on). This is the nightmare scenario expressed in whispers—the potential for a car to lose control and careen into a crowded parklet. In theory, the parklets should only take up the same space a parked car would occupy, so they shouldn’t narrow the streets more than normal. But parked cars get nicked all the time. This wasn’t as much of a concern during the pandemic when fewer cars were on the road. But now that the economy has reopened, the risk goes up significantly.

The loss of parking is another issue—both for citizens and neighboring businesses, which need parking for their customers. By reducing parking, we’re pushing drivers to search for space in residential areas. Also, taxpayers pay for streets and parking spaces.

So the public is essentially subsidizing a private business (and if we’re subsidizing restaurants, why not dry cleaners?). Then there are lesser but no less valid concerns, like the fact that some parklets have all the aesthetic appeal of a crushed beer can on a sun-bleached lawn chair.

Every paradigm shift has its challenges. Mayor Todd Gloria has supported taking appropriate public spaces from cars and giving them to pedestrians. He backed the idea of turning Fifth Avenue in the Gaslamp into a promenade. If their owners do this by the book, restaurants may alter the paradigm of cities like San Diego—and the US as a whole.

“In the past year and a half we had a bit of a dress rehearsal of what that might feel like,” Studebaker says. “It’s a positive thing to use our public space to accommodate more activities that aren’t solely restricted to transportation where it’ll be beneficial. I think it’s a great shift for the city.”