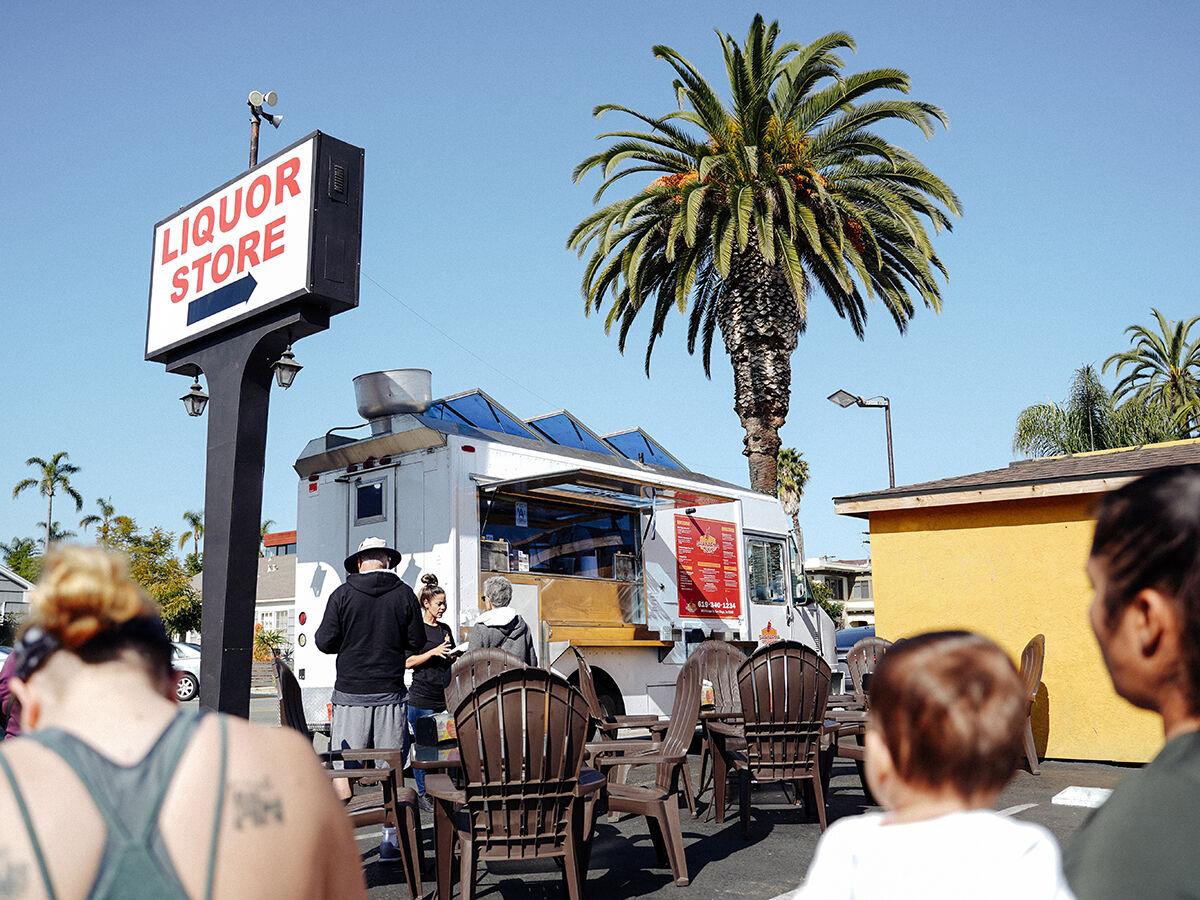 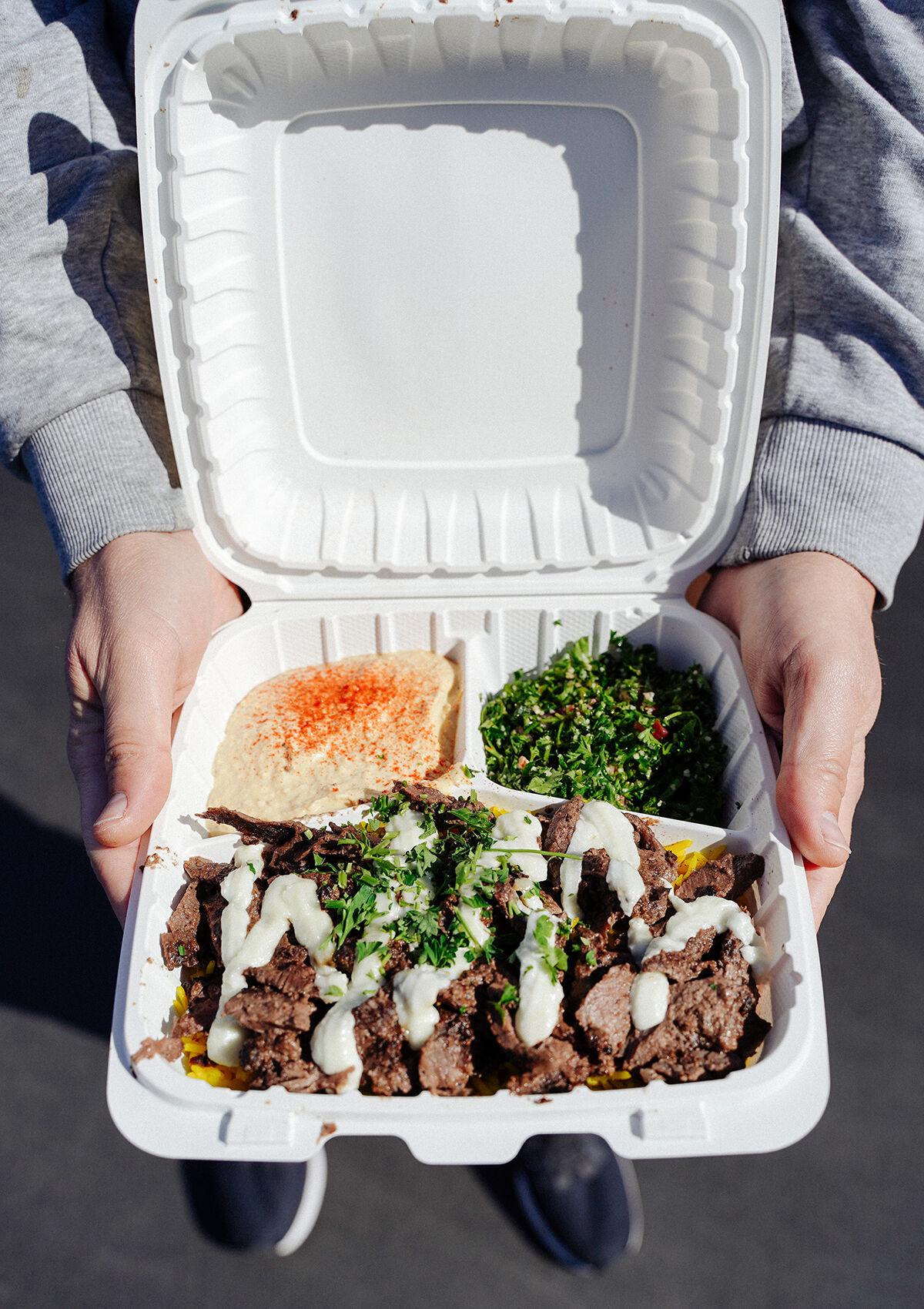 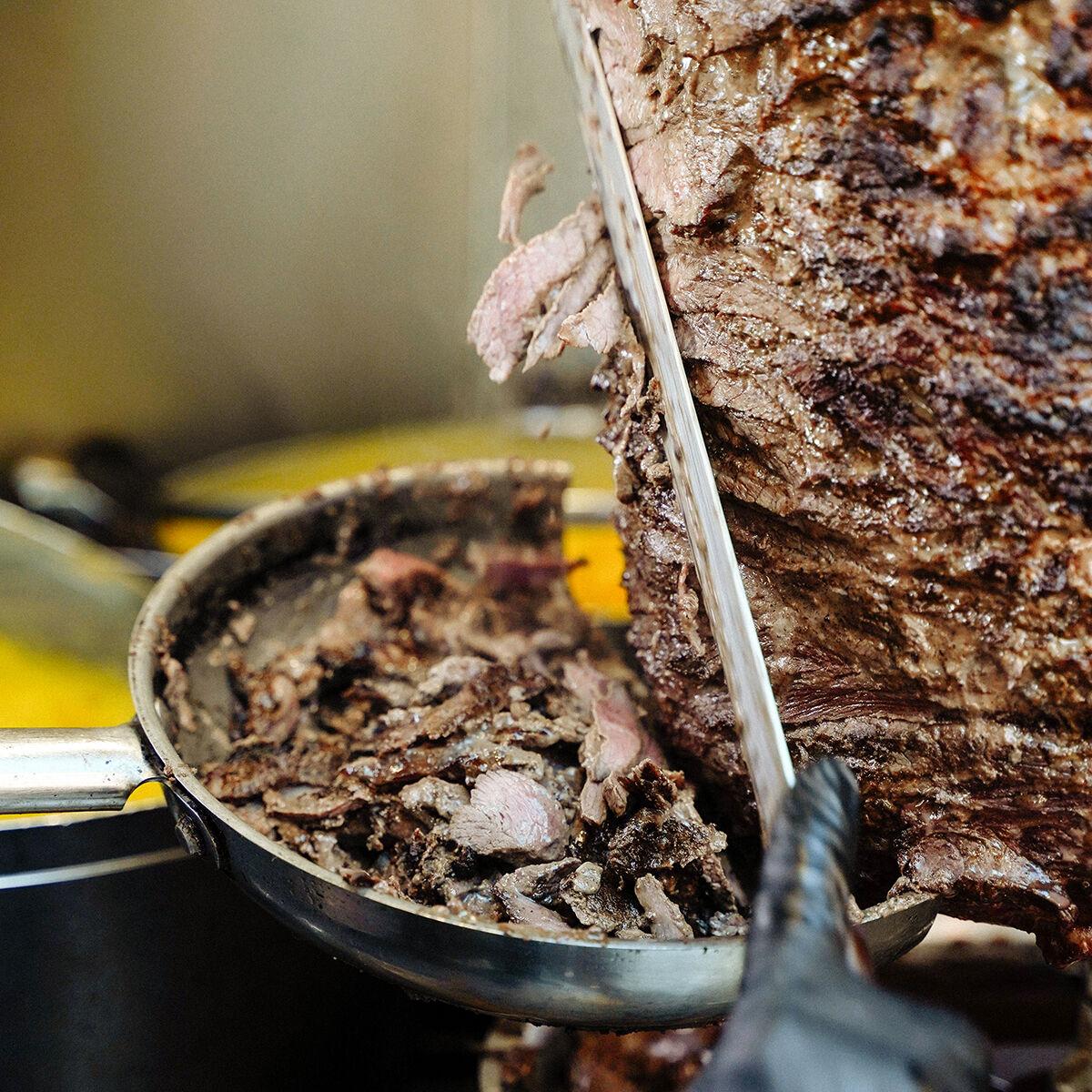 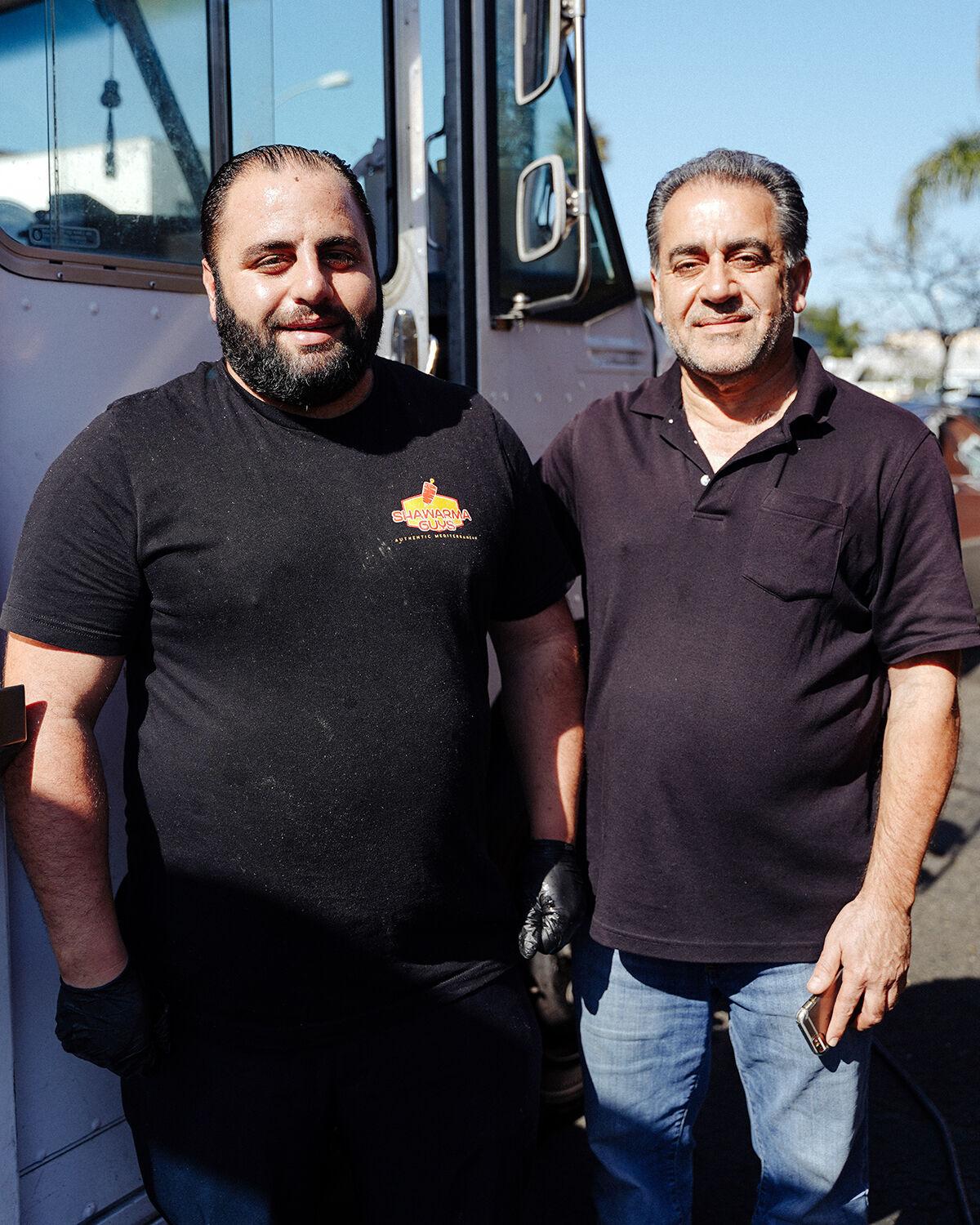 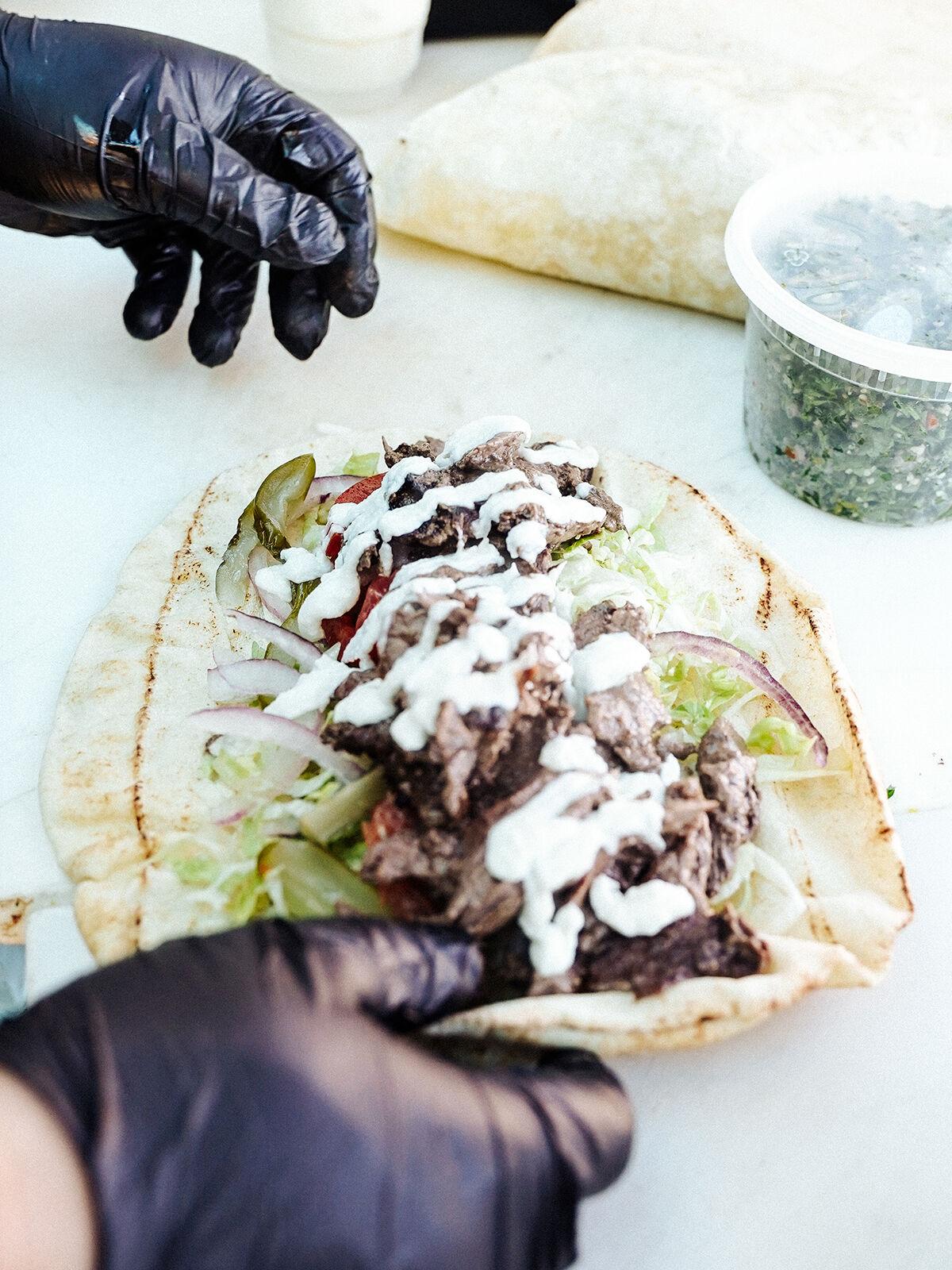 Bryan Zeto always had a passion for cooking, especially barbecuing and grilling meats.

Hailing from an Iraqi Chaldean family in the Detroit area, Zeto says shawarma—meat slow-roasted on a vertical rotisserie, shaved into thin slices, and served in a flatbread like pita—is a treasured dish he grew up eating. The portable Mediterranean/Middle Eastern sandwich is (rightfully) one of the most popular street foods in the world, and Zeto brought a taste of his heritage to South Park last year when he launched his food truck, Shawarma Guys, with his dad, Samer.

Zeto and his family moved to East County when he was 11, and he became a successful business owner in the wholesale cellular industry. Once he was ready for his next venture, he wanted to delve into the culinary world and considered opening a taco truck. His close friend Steven Hirmez talked him out of it, and convinced him to go with the flavors that he knew and were close to his heart. “I wanted to bring what I felt was missing in San Diego,” he says.

He launched his elevated take—the Shawarma Guys food truck—in January last year and parked it in the lot of The Bottle House on Grape Street, which is owned by Hirmez. The beef is Australian wagyu, roasted on-site and served in a pita wrap or on a plate. Zeto charges $15 or less for a meal.

To say they had a hit debut is an understatement: On busy days, the line snakes down Grape Street and the wait can exceed an hour. After just one year in business, Shawarma Guys was named No. 1 on Yelp’s 2020 list of the top 100 places to eat in the US.

Zeto was kind enough to give us a peek inside the truck and show us what makes their shawarma a cut above the rest.

Stacks of wagyu beef are marinated overnight in olive oil, cumin, and coriander, then placed on the rotisserie hours before the truck opens at 11 a.m. Zeto goes through 150 to 200 pounds of beef a day. Why wagyu? “No one is doing it,” Zeto says, “plus, the meat won’t dry out [because of the marbling], even if I burn it. It stays really juicy.”

After roasting, the beef is practically falling off and ready to be carved. “The first slice is the best slice,” Zeto says.

The beef shawarma is served either wrapped in a thin grilled pita with all the ingredients neatly tucked in, or on a plate with yellow pilau rice, housemade hummus, and tabouli (a chilled salad of bulgur wheat, parsley, mint, tomatoes, and olive oil). They also serve chicken shawarma, as well as an outstanding falafel that’s moist and perfectly fried. For a California spin, there are shawarma fries, too.

Know Before You Go

The truck doesn’t sell drinks. Bring your own or get some next door from The Bottle House.

Expect to wait for your food. On weekends, the line may take up to an hour—but it’s totally worth it.

Get an order of garlic paste on the side.

Editor's note: This story was written and sent to press before the mandatory stay-at-home order and appeared in our April 2020 issue. Shawarma Guys accepts call-ahead orders for takeout and has social distancing measures in place.