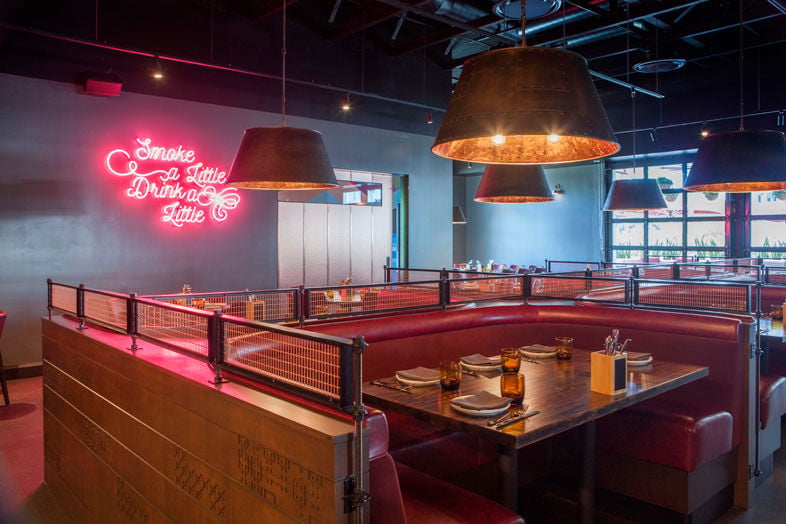 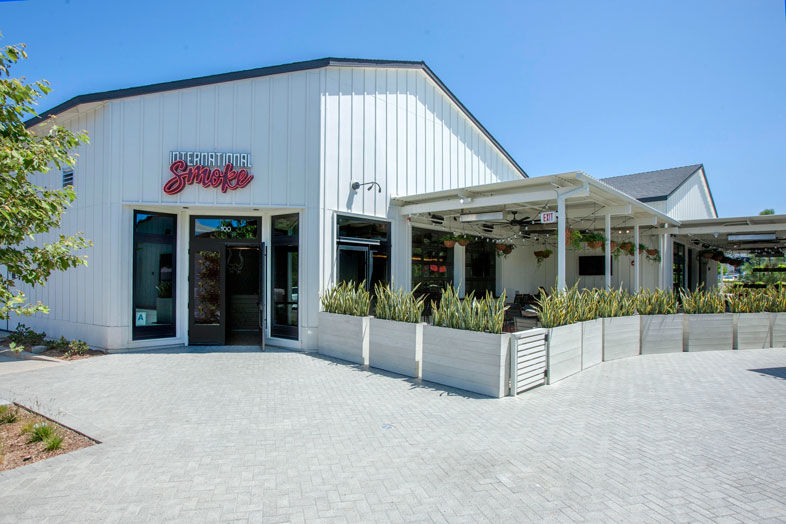 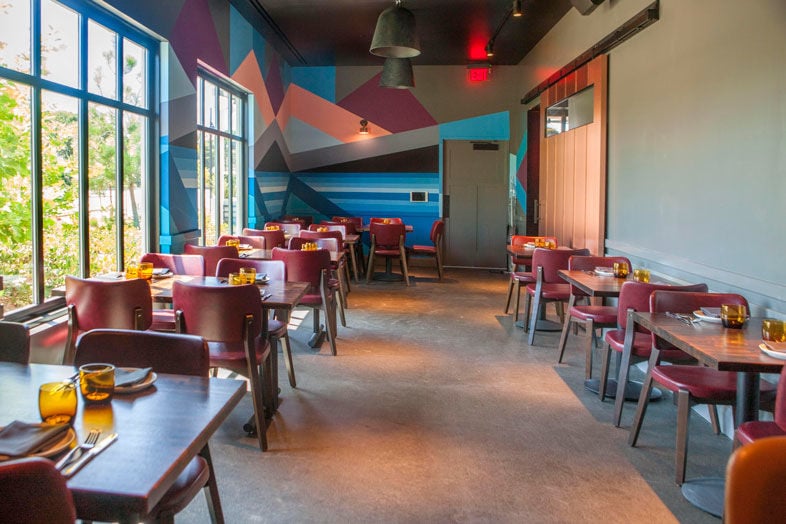 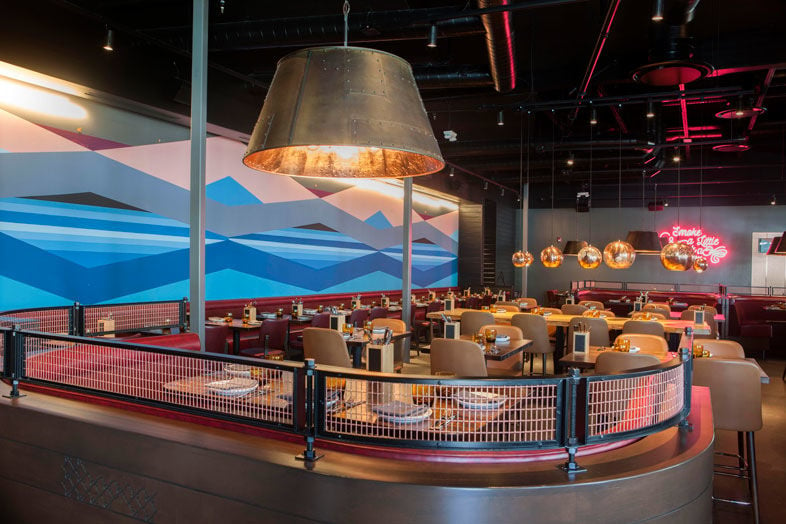 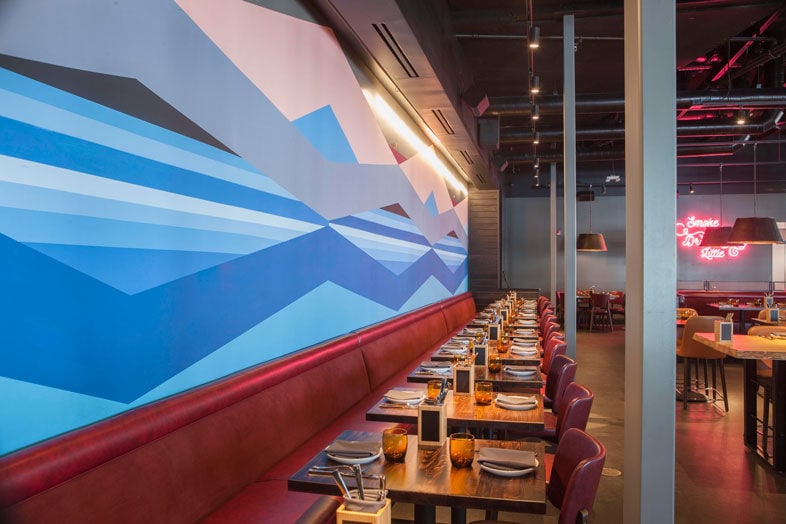 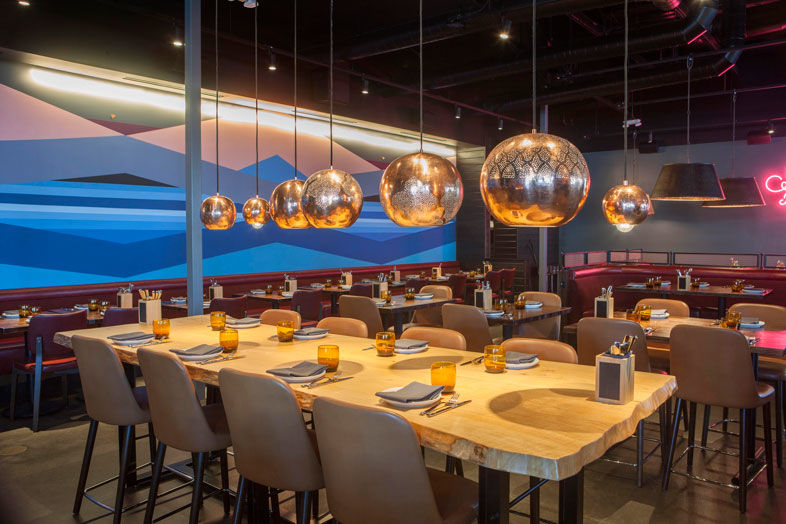 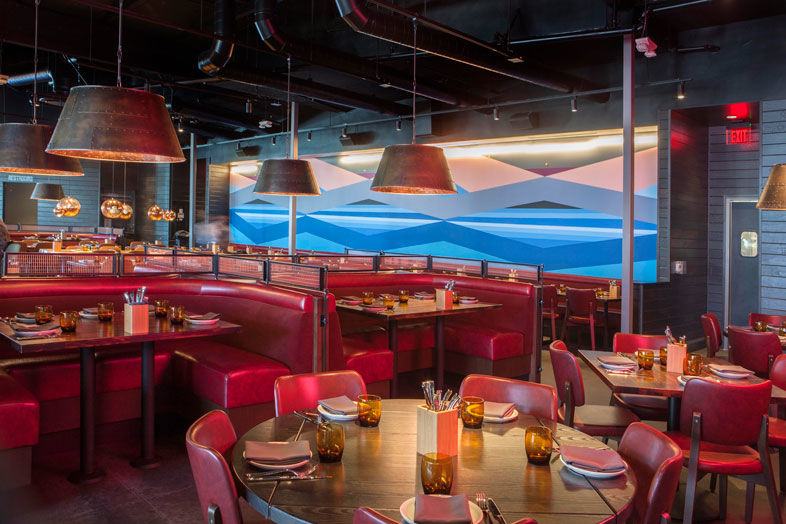 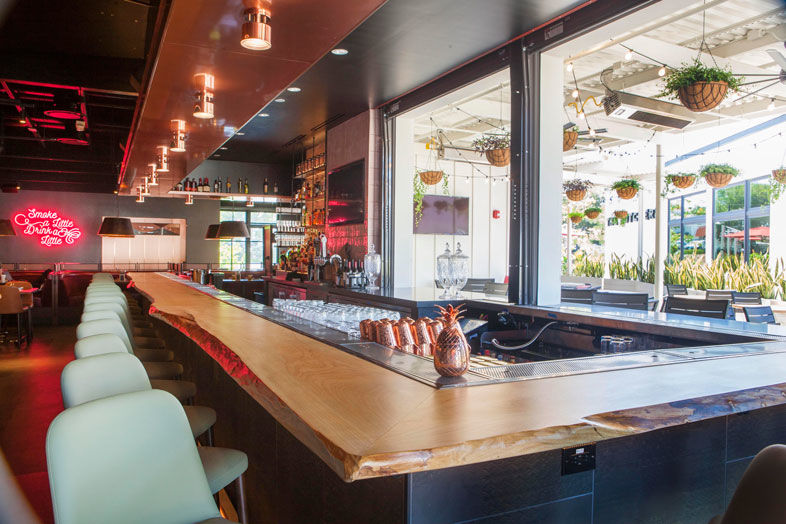 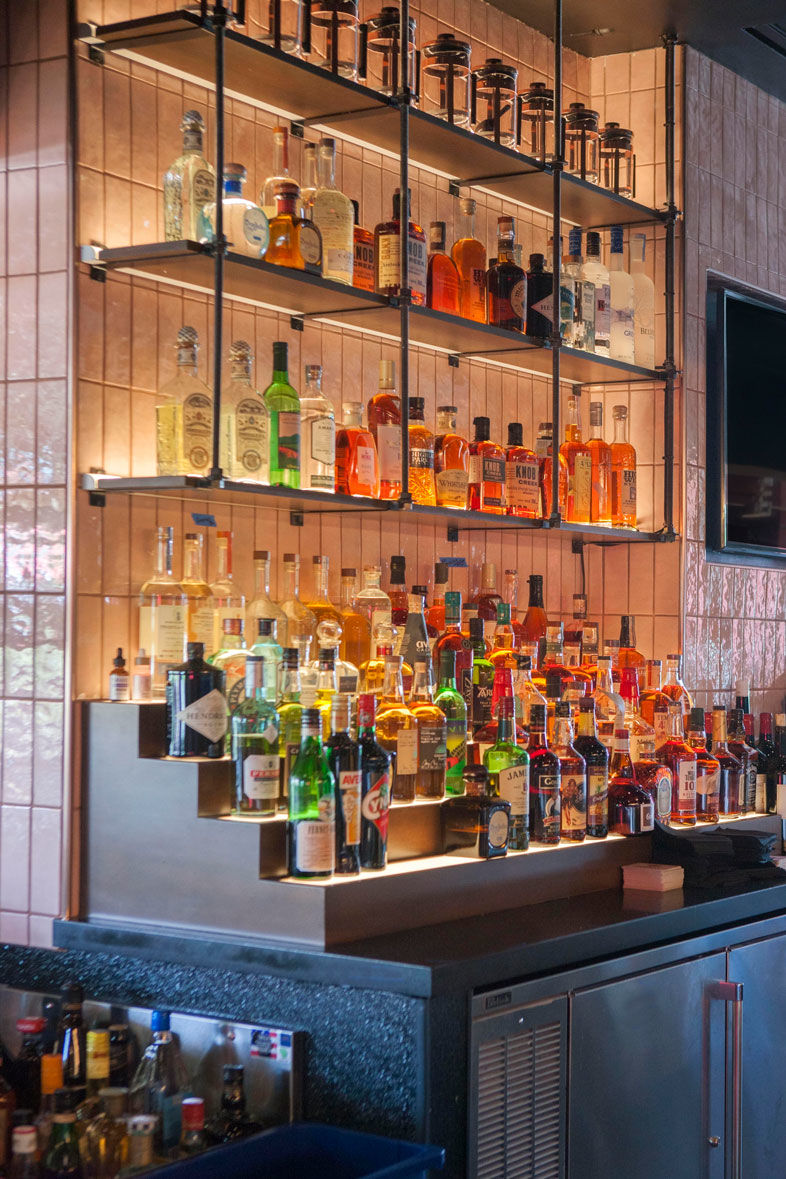 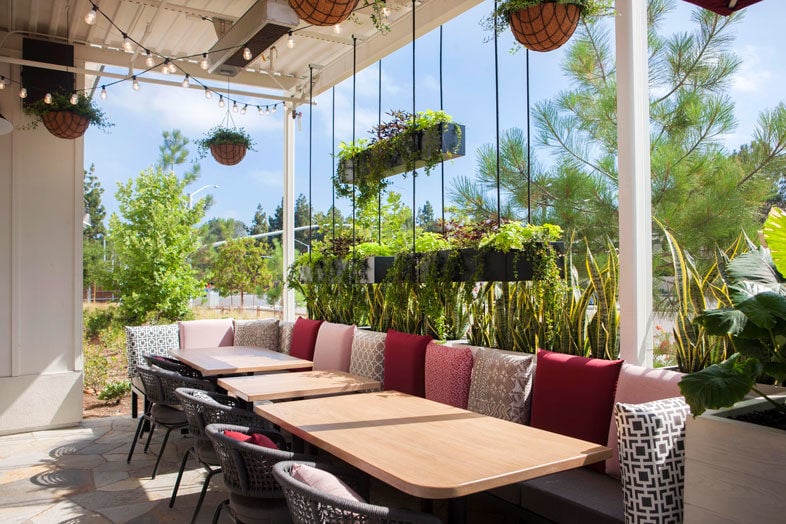 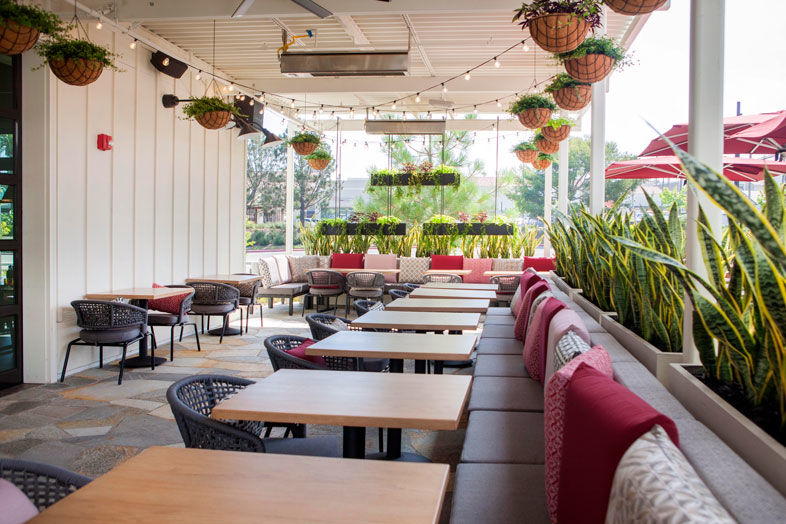 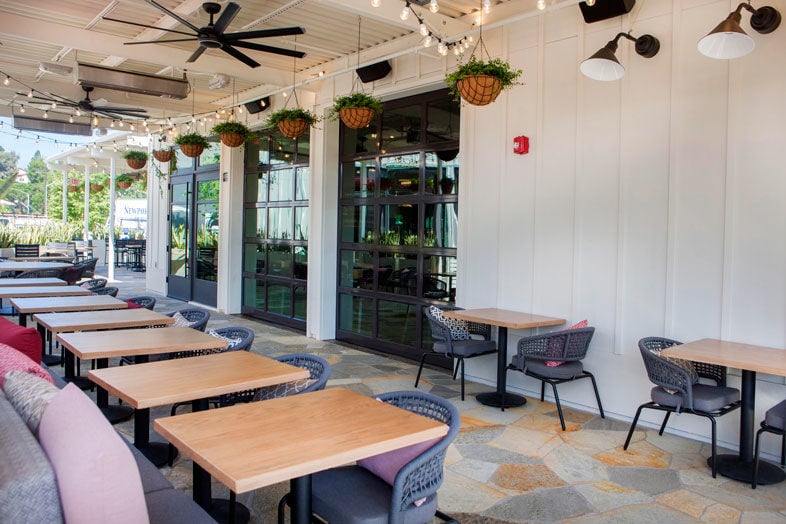 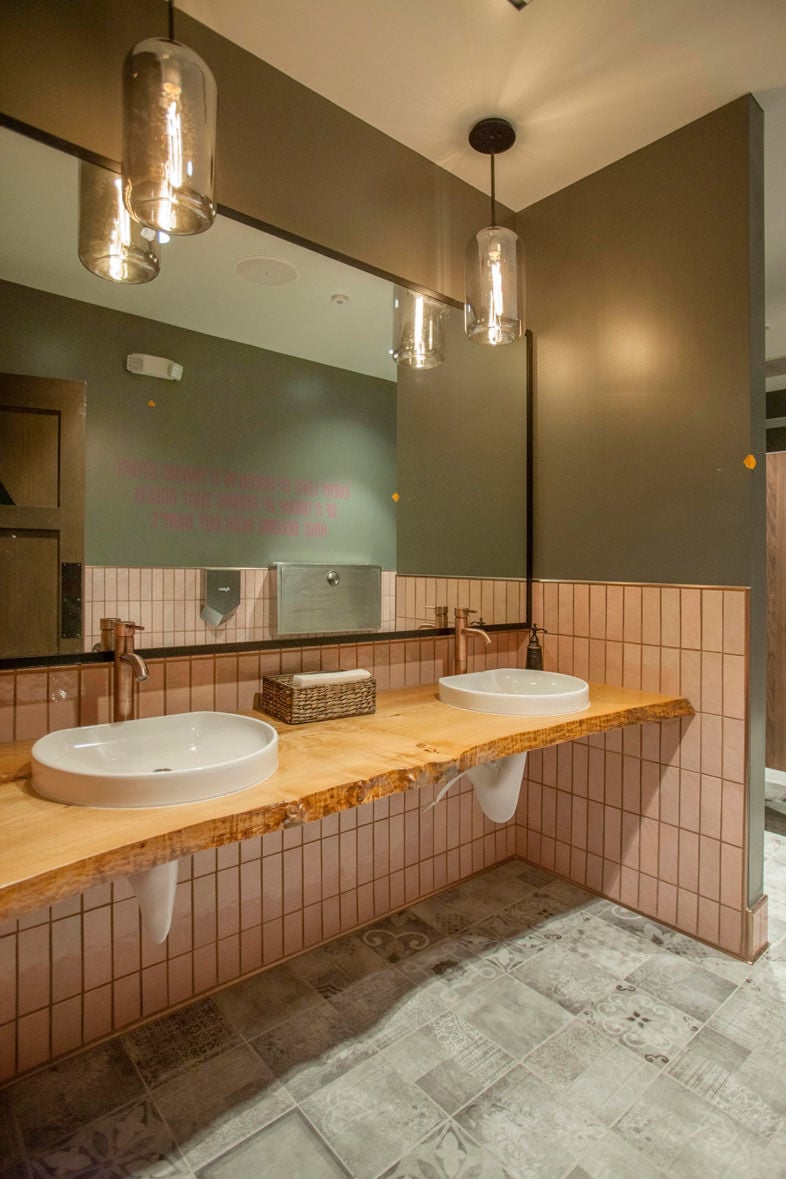 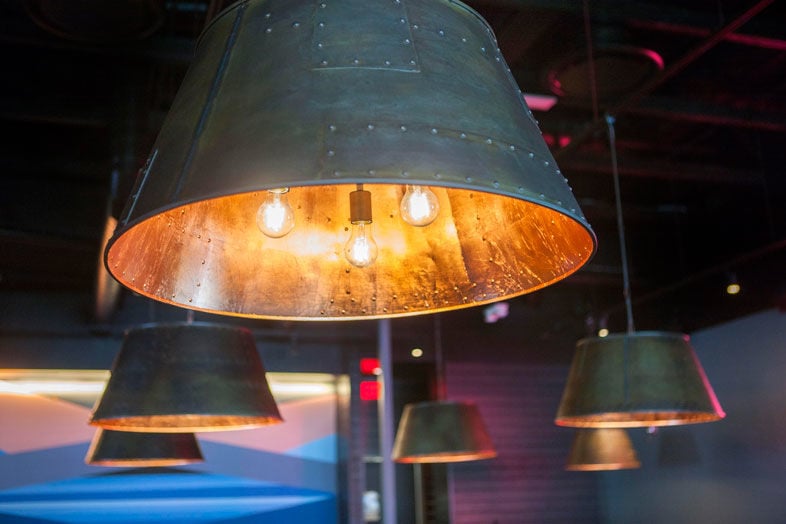 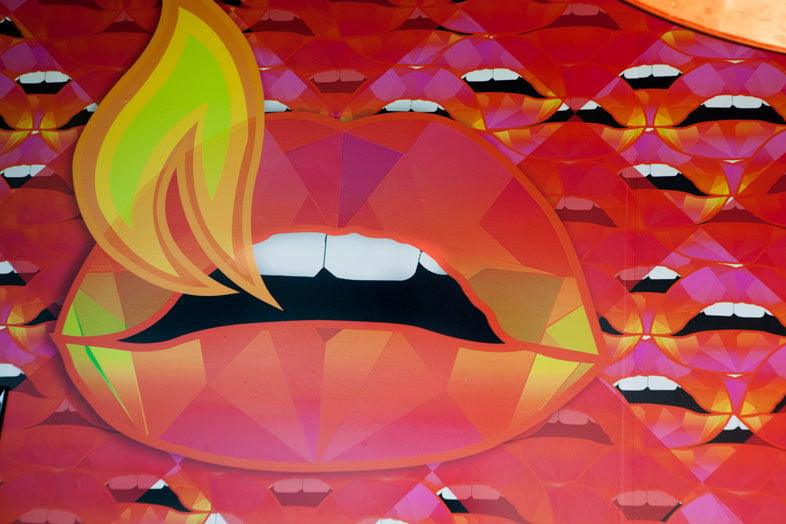 Chuckling is a survival skill Mina knows well. Three decades ago, the Bay Area chef was told he was psychologically questionable for leaving Aqua to open his own place (named Michael Mina). That restaurant won a Michelin star. He drastically underestimated the effects of opening a restaurant in the Bellagio in Vegas in 1998. That one broke all the career ceilings wide open. But he also felt the crushing defeat of his concept XIV in Los Angeles. A chef’s life is not a straight line to the top.

Now one of the most highly decorated chefs in the American landscape, Mina and partner Ayesha Curry have opened International Smoke—a wood-fired concept at One Paseo in Carmel Valley. Curry’s made a name for herself as a cook, starting with her Food Network show Ayesha’s Home Kitchen and the current Family Food Fight on ABC.

Her husband is NBA star Steph Curry. I’m obliged to mention this fact, but also don’t want to, because, while Steph’s star power and financial success have no doubt aided Ayesha’s pursuits, it feels a little dismissive to immediately attach his name to her work. All press about her does this. And it makes sense. But if she couldn’t cook, didn’t have talent, it wouldn’t matter if she was married to Beyoncé. At some point we as media should decouple her success as a cook from her husband’s ability to play basketball.

International Smoke is Curry’s first restaurant concept. She gets to see the almighty tornado of what this entails. For Mina, it’s just another fire. They’ll get through it or they won’t. Mina will be in San Diego for at least a month, working directly with the staff and sharing as much knowledge as he can before he has to move on. He’ll also be back to perform at the music/food/art festival Kaaboo, where he’s the culinary ambassador.

The restaurant has been a breakout success since its first day at Test Kitchen, Mina’s Bay Area space that was basically an incubator for new concepts (he recently closed it, but is actively working with all the chefs who came through it). Mina was interested in working with Curry on the "live fire" concept because he’d seen the magic of that kind of cooking in his travels, in the backwoods of famous food cities.

"We do these chefs trips every year with four to eight chefs," he explains. "We go to a different country or continent. We’ll hit up a bunch of different restaurants. But we always find those two or three places in the middle of nowhere. It’s the best food and it’s always more primitive. Nine out of ten times it’s live-fire cooking. I’ve always thought we have to do a concept that embraces that."

I talked with Mina about the ups and downs of his fairly stratospheric career, working with Curry, and the challenges of opening a chain restaurant, even if that chain restaurant is attached to Michael Mina.

(A full photo tour of the new International Smoke is at the bottom of this story.)

What level of uncertain hell is opening a restaurant?

It’s a perfect storm. You have to pick a date. We gotta be ready for 400–500 VIPs on opening night. Then there are inspections. This one pipe doesn’t fit right, so the plumber’s gotta come back. Everything’s a chain reaction. Anyone’s who’s remodeled a backyard can relate. You’re trying to juggle a hundred things. In San Diego, the carpet we ordered came in a different color. We had to send it back. But we were also trying to train the service staff. So we had to pull out all the tables to fix the carpet, and they couldn’t train. We’re a wood-fired restaurant, so the oven is the heart and soul. We decided on the perfect oven only to find out they didn’t make that model anymore. Meanwhile, the clock’s ticking.

You’ve won a lot of awards. Many successes. What was the one that really changed your career?

The biggest one is also the one I think nobody understood—Aqua at the Bellagio [now named Michael Mina]. The stage of Vegas was so much bigger than any of us chefs thought it was going to be.

When my first company, Aqua, split up and I left. Scariest thing in my whole life. I was 32, had two kids. Everyone told me I was crazy. I’d been a chef at Aqua for 10 years. But I also knew what the future was going to bring with Charles [Condy, his partner]. And at the new restaurant, I’m the brilliant person who decided to do "trios"—doing every dish three ways. I remember doing our first little dinner and thinking, "Oh my god, I’ve created the hardest concept of all time." We’re all confident in our abilities. But that doesn’t matter, because there’s also reality. It’s not just you who’s taking the risk, it’s your family. It’s hundreds of people who’ve left their jobs to follow me and are relying on me.

You recently changed the concept of your flagship restaurant, Michael Mina, to honor your Egyptian roots and your mom’s cooking. Why?

Maybe it’s a midlife crisis. It’s been great seeing Michael Solomonov [chef of Zahav in Philadelphia] take Middle Eastern cuisine and showcase it. I grew up eating it. I think it’s why I have such a love for food. Michael Mina was originally Aqua. That’s my baby. That’s where I’ll end my career. I want my last concept here to be my life story put into a restaurant.

You’re serving your mom’s recipe for falafel at International Smoke. What makes it so special?

It’s a lot lighter. She puts a tiny bit of English peas in there. She came to Michael Mina and flipped out over the whole meal, but told me my falafel is still not as good as hers.

XIV in Los Angeles. That hurt. It was an emotional setback. It was the first time we put our heart and soul into a restaurant and it didn’t work. I really thought we did something special, but a few things worked against us. Irene [Virbila, former Los Angeles Times food critic] hated it and it kind of spiraled after that. What hurt was the amount I had to ask of my employees. My GM literally had to recode Micros [the standard computer ordering system for the restaurant industry] because of what we were doing. You use up a lot of credibility when that happens.

Luckily, the one right after that was Bourbon Steak in DC. You forget that DC has the most media in the country. They’re a lot tougher. It’s like, "Oh, you’re coming to our city to open a steakhouse? You think so?" I had to convince them to give me a chance, that it was going to be different. Thank God it was. We were budgeted to do a really small number, and the first year we quadrupled it.

You road-tested a lot of concepts at Test Kitchen. But it seems International Smoke has had the biggest splash. Was it a combination of fame—yours and Curry’s? The food? The concept? A combo?

It’s a combination of everything. Obviously the immediate interest was Ayesha and how dynamic and interesting she is. But also being global. It’s taken a little while for everybody to really understand, but it’s not just barbecue—it’s more live-fire cooking. Every country started with this kind of cooking, whether making kebabs or using binchotan charcoal in Japan or barbacoa in Mexico. We worked really hard to make this a global concept. Ninety-five percent of people going to a restaurant now want to experience something new. At Smoke, they find comfort food in dishes like St. Louis–style ribs, but they’re also going to get wood-fired seafood and big, global flavors.

Why San Diego, aside from mental well-being?

We’ve been in Laguna for a long time, and we have great customers in the area. We can get everything we want here—all the best produce, all the same top quality. But just looking at it as a city, I think San Diego is moving the needle.

You hired local chef Ryan Orlando to run the Carmel Valley location. What do you look for in a chef?

It’s having somebody who’s going to run a clean, organized, disciplined kitchen and gain respect because nobody’s going to work harder than he is. Because he knows how to cook and is ready to do that and be the leader. But most importantly to me, can the chef walk out to that dining room and make friends with that guest? At the end of the day it’s still the hospitality business. I will not have a chef that says, "They want ketchup? Forget that asshole."

You and Ayesha are going to have to move on. How does International Smoke in Carmel Valley maintain the quality once you’re no longer here every day?

Look, there’s no magic answer. Every restaurant is only as good as the chef and the general manager—Ryan and Alex. We put in the money and the training. You give them the wood-fired grills. You set them up for success. I’m here for a month and a half. I’m not going to hand this off to anyone who can’t run it. I’ll be here for two years if we can’t get the right person.

It is. It means our staff is going to get attention. The bad news is that there might be some people who have unrealistic expectations. So we have to over-exceed those expectations.