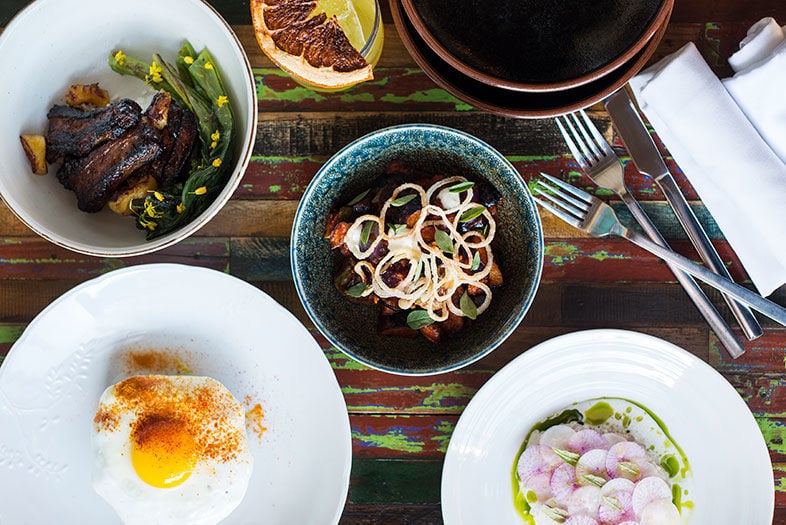 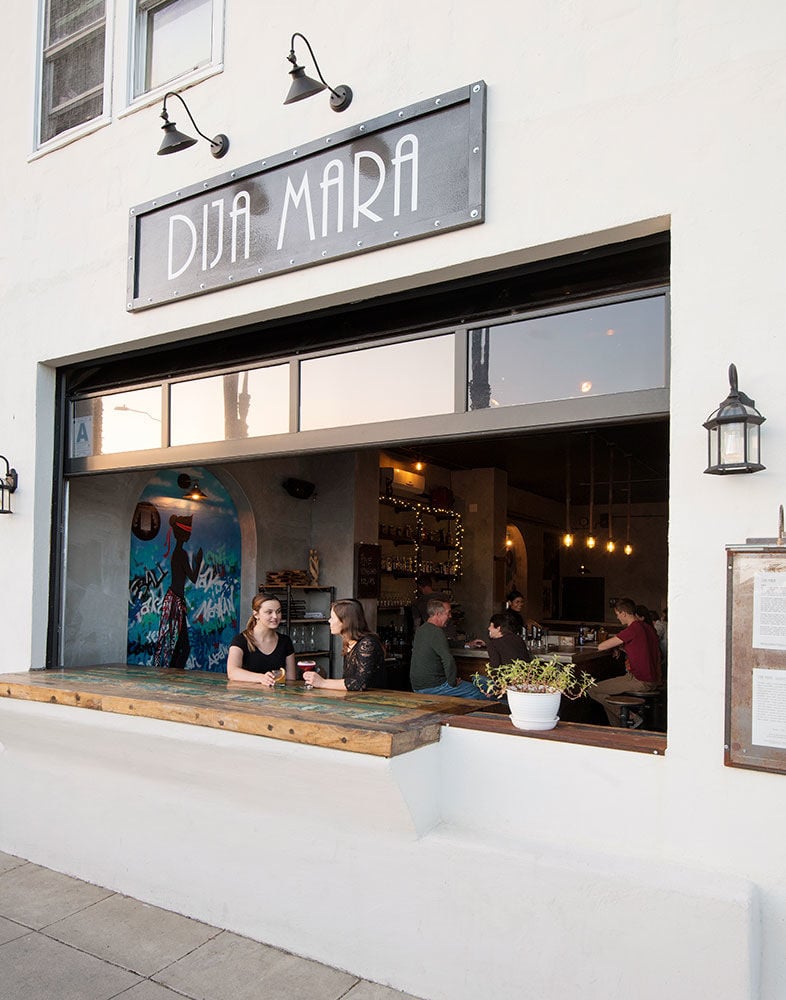 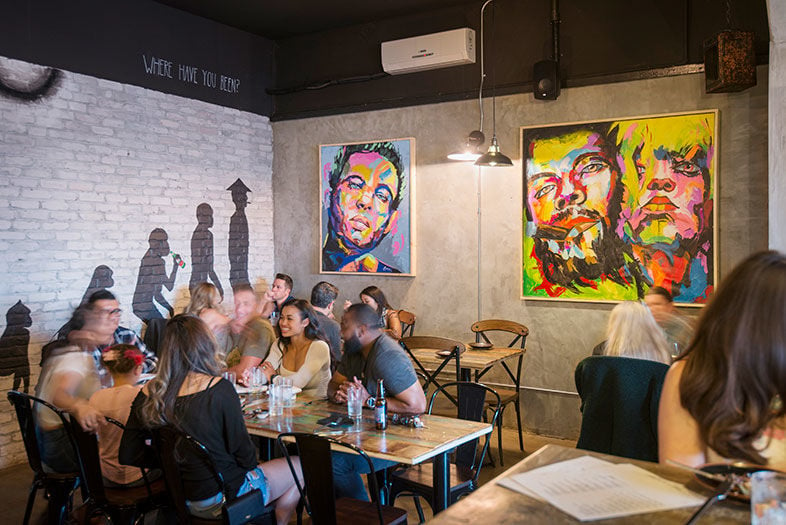 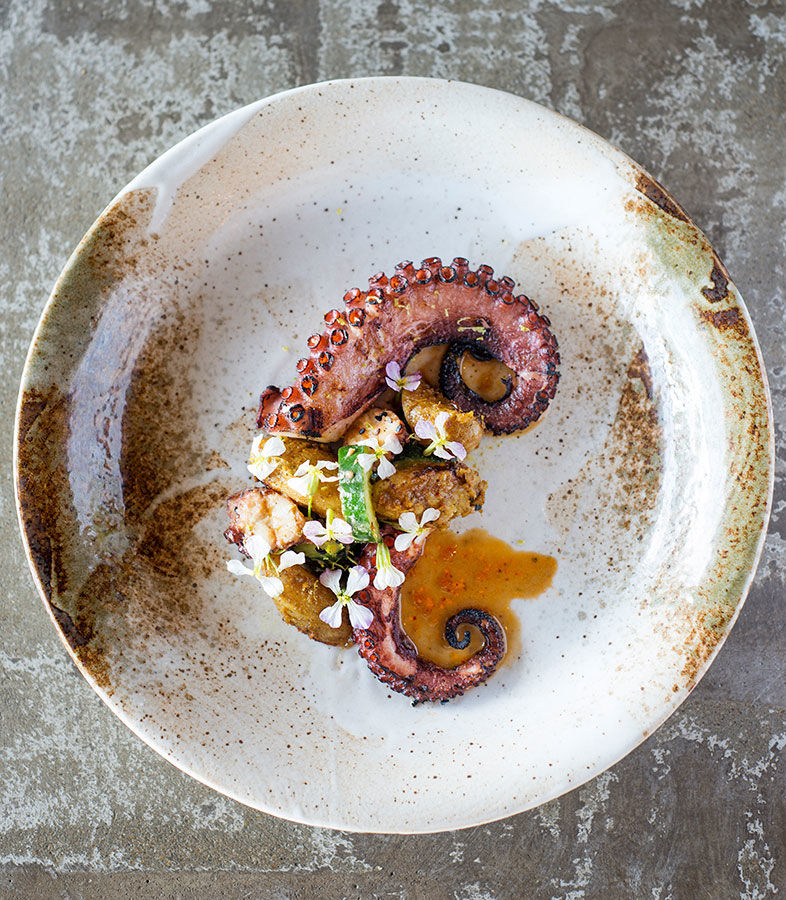 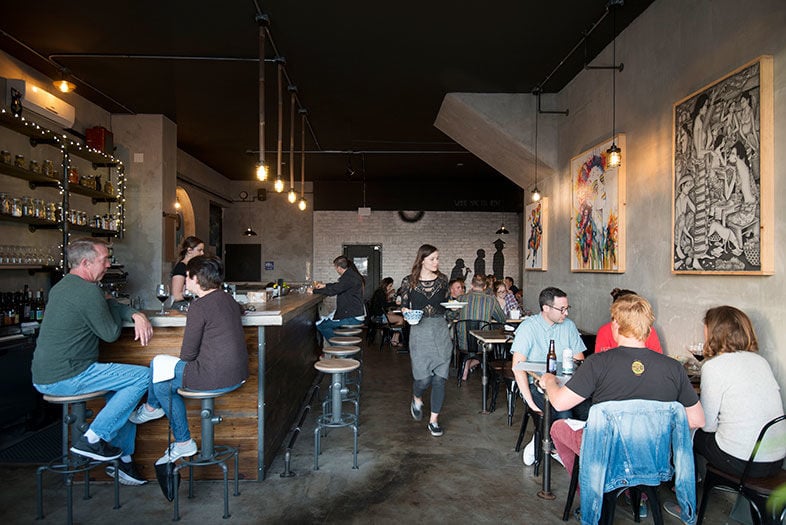 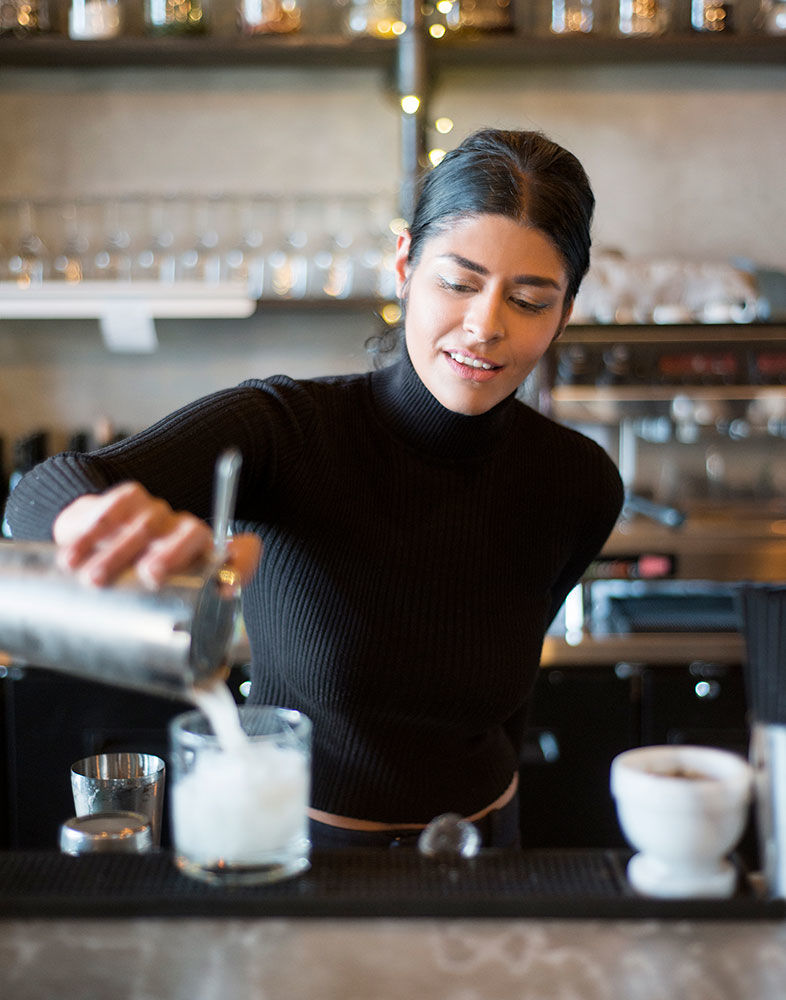 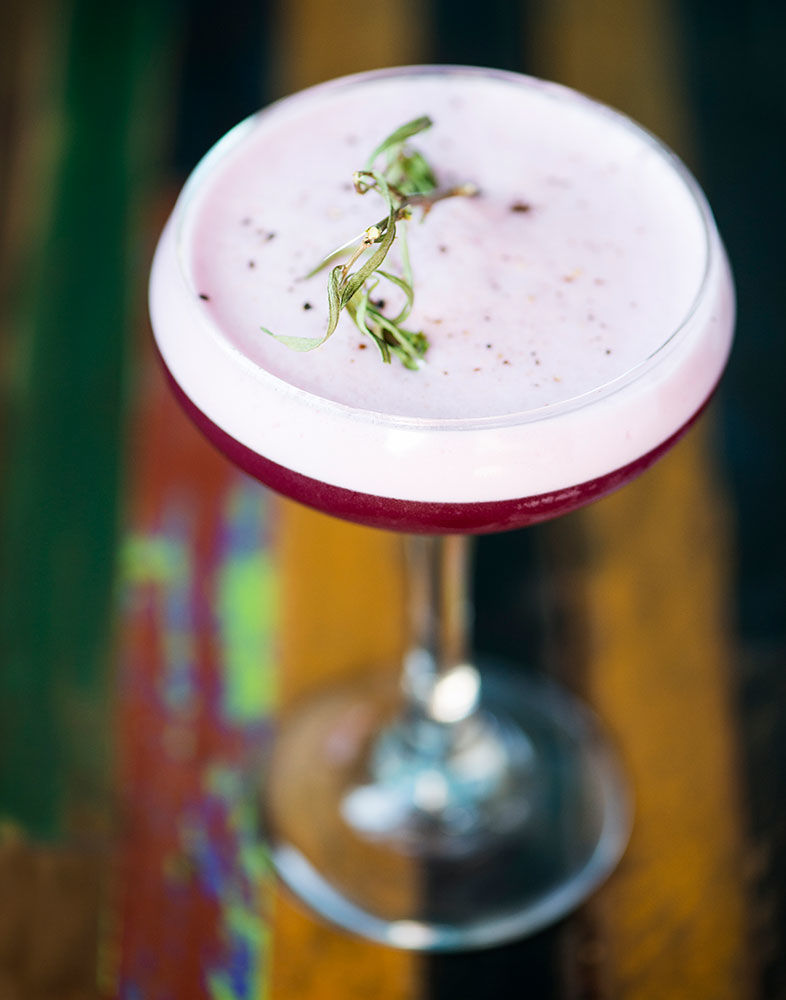 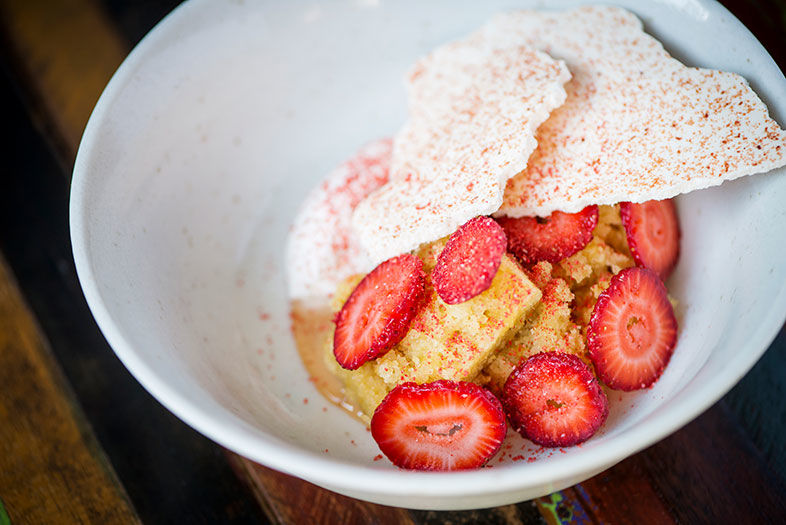 Smells like Fruity Pebbles in here. I’m sure there’s a more sophisticated culinary description. But for those of us who grew up in the boxed sugar-food culture of the ’70s, nothing describes the tantalizing aroma of makrut lime leaf quite like the Flintstones cereal. I fell in love with the leaf through Thai food. It, along with lemongrass, lends curries like panang a bright, floral citrus note. Among the deep chili lava and tropical fat of coconut milk, the makrut leaf floats through every bite like a sweet wind. For years we knew it as "kaffir," but since that word is also a nasty epithet in several parts of the world, now we call it "makrut." Whenever I shop at Asian food stores, I buy six or seven packets of makrut and store them in my freezer so that I’m never without it. It’s my favorite flavor in the world, and it’s the star of Oceanside’s Balinese restaurant, Dija Mara.

Much as the small, urban restaurant seems created for me, husband-and-wife duo Rob Jones and Simran Soin built it as a love letter to their favorite place on the planet. Soin is from Singapore; Jones is a restaurant lifer. They transplanted to San Diego last year and didn’t take shortcuts in the kitchen when they hired chef Ryan Costanza. His resume screams; he’s worked with two-star Michelin chef Daniel Patterson (Coi in San Francisco) and spent the last year as the director of operations for Dominique Crenn (also a two-star Michelin chef).

From the roll-up garage doors out front, patrons dressed in their best surf formal attire (anything with a collar, really) line up and gaze over South Coast Highway. The place is small, moodily lit. Concrete arches built into the wall frame Indonesian graffiti art and silhouetted island women. One wall is painted white brick with a giant mural riff on the famed March of Progress evolution drawing. The halfway-evolved figure is drinking a Bintang Indonesian beer, and the modern human is wearing a coolie hat and smoking what appears to be a beefy spliff. The soundtrack is hip-hop, which breathes a good beat and urban feel to the reclaimed wood and concrete room. Dimly lit at night, Dija Mara has the feel of a hip shadow world.

A large, square bar centers the room, where locals pony up for craft beers, ciders, wine, and wine-based cocktails like the excellent Paloma #232, a mix of grapefruit-infused agave wine, passionfruit syrup, and fresh lemon juice with a salt rim and a slice of candied Ruby Red grapefruit for garnish.

Makrut and lemongrass are all over the menu, whose dishes are Californicated versions of Balinese staples, all priced extremely fairly considering the mostly local, organic ingredients and the cost of Costanza’s pedigree. Three elements that dominate the island cuisine are coconut milk, ample spices—shallots, garlic, turmeric, ginger, cumin, coriander, clove, tamarind, etc.—and sambal, an Indonesian hot sauce usually made with red chilis, ginger, lemongrass, vinegar, sugar, salt, and lime zest. Pork and duck are both ceremonial dishes, and beef is largely ignored due to the motherland’s large Hindu population. Each meal at Dija Mara starts with their complimentary shrimp chips and housemade sweet-hot sambal.

Makrut makes its first appearance in the ceviche, which consists of an alien-green makrut oil beneath a small mound of red snapper marinated in coconut milk and makrut lime juice, topped with fermented daikon and thinly sliced cucumber. It’s very good, this Fruity Pebble coconut-lime ceviche, and would be great if not for a slightly bitter aftertaste, which makes me think makrut pith accidentally got into the dish. (The pith is incredibly bitter and must be avoided). Their king salmon crudo looks like a so-so poke bowl, but the chorus of flavors—lemongrass, blood orange, papaya, fish sauce, candlenut, and crispy coconut rice—is excellent. Fish sauce is another staple of Asian cuisine. Don’t let it scare you; anchovies are what make our western Worcestershire so delicious, after all. It takes a seasoned chef to use the potent elixir with restraint, and Costanza does. The Kobe beef tartare is just about perfect, with black garlic, curry aioli, lemongrass, lime, and peanuts over toast. The crab and corn fritters arrive looking overcooked, but one bite proves otherwise—great seafood flavor with hearts of palm, lemon cream, green chili jam, radish salad, and lardo (delicious aged pork fat).

For a tiny bistro, the service each night is excellent. Everyone does every job, but efficiently so, and they’re well versed on the nuances of each dish—which is impressive, since the average one has about 4,000 ingredients. The classic Balinese dish gado gado, for example, has local carrots and haricot verts, a hard-boiled egg, tofu, sunflower seeds, and prawn crackers, all tossed in a peanut sauce that has nearly the depth and flavor of a glaze or stock.

If there’s a slight complaint to be found with Costanza’s creations, it’s that he can’t stop creating. With so many flavors on the plate, some get lost in the parade. But there’s some real big stars, like the nasi goreng, a bowl of fried rice with bay shrimp, pork belly, confit chicken, and fermented hot sauce, all under the lovely tarp of a sunny-side egg. Or that Spanish octopus, tenderized and then grilled and laid in a shallow pool of lamb jus for a surf-and-turf effect, seasoned with sambal powder and given relief by cucumber and potato rendang. And the 24-hour pork belly, which doesn’t look like much, but is made intensely tasty with tamarind caramel glaze and an eight-hour roasted pineapple. (Yes, even pineapple is given a full third of a day to become its ultimate self.) The laksa is like an Indonesian ramen, a heaping bowl with prawns, chicken, sweet Chinese sausage and thick egg noodles in a curry broth. Costanza’s duck leg—the simplest dish on the menu and a classic that in Bali is often reserved for ceremonial dinners—is textbook confit, seasoned with calamansi and galangal (a mandarin-orange-kumquat hybrid and a root similar to ginger, respectively).

Costanza’s kitchen-sink approach to cooking mostly works. The only dish that crumbles under the weight of its ingredients is the makrut lime panna cotta, as it’s covered with screw pine ice cream (excellent), sable cookie crumble, and a coulis of roasted blueberries. It’s simply too much, especially for a dish like panna cotta whose appeal is in the texture and simplicity. Nothing wrong with the Strawberry and Coconut number, though: a ginger cake with coconut dulce de leche, glazed strawberries, whipped coconut cream, and coconut meringue dusted with what appears to be dehydrated strawberries.

Dija Mara is ambitious. Everything is a riot. Nothing is understated, save for the mood lighting. So many flavors. The dishes are like that Coachella band that brings 17 members onstage. There’s a tambourine, a cowbell, a glockenspiel, a hand clapper and a whistler. It’s exciting and showcases one top chef talent and the neighborliness of the owners, who hold court behind the bar and visit with the guests. There was an Indonesian food hole in San Diego, and it’s been awesomely filled.