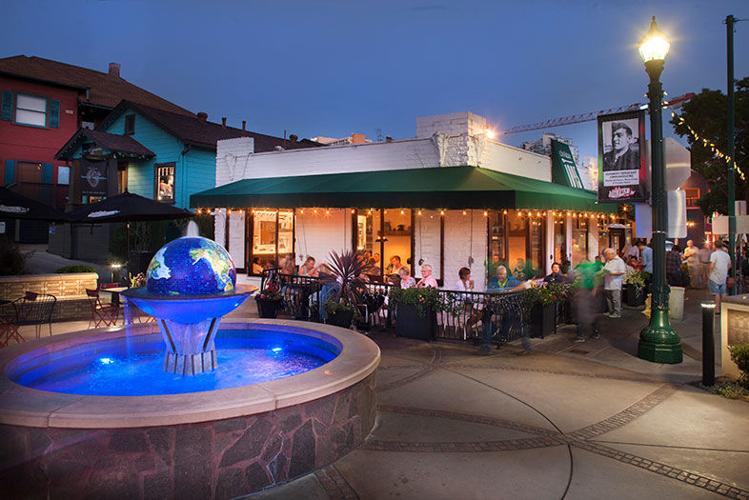 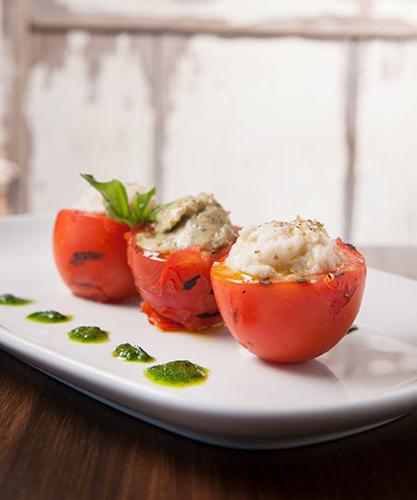 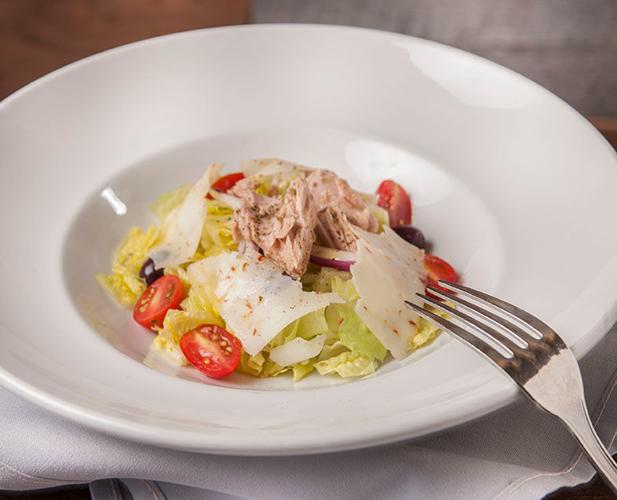 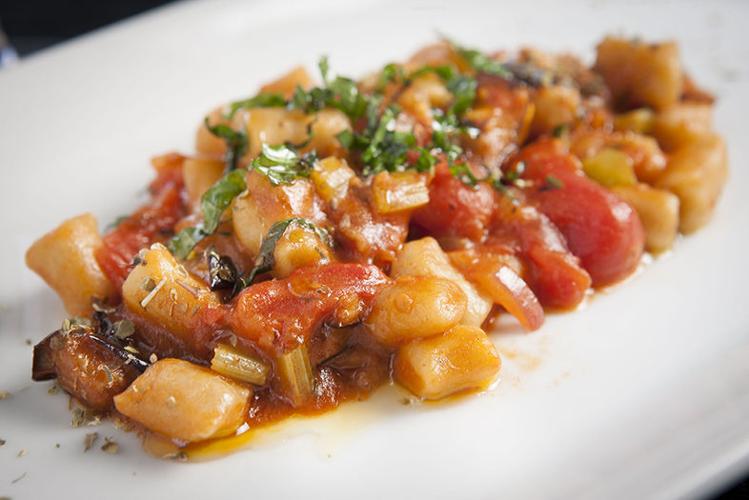 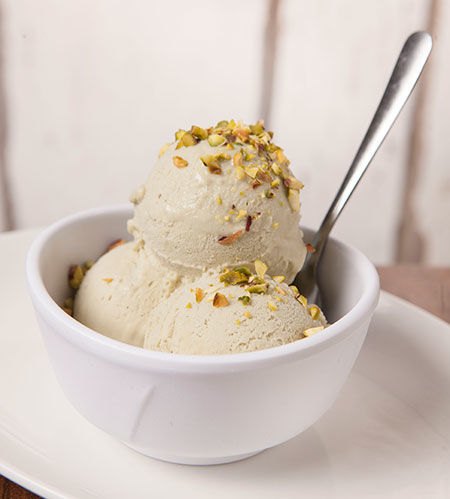 We spend a good portion of our lives escaping. Whether it’s through music or movies or booze or sex or art or sleep. Done well, restaurants should be an escape from the usual, repetitive place where we eat (dining room, work desk, couch, car, etc.). A restaurant’s ambience doesn’t need to be better, per se. Although cooler art and more beautiful or more interesting people a table do help. It just needs to be different. It needs to feel like we’ve been transported.

The root words that define ecstasy, after all, are "ex" and "stasis," meaning we reach that metaphysical high not by simmering in the same environment or situation day after day after month.

Movement, exploration, exposure to new stimuli is apparently key to happiness. At least one of them. Which makes it vital that a good restaurant is so, so much more than a plate of hot, well-seasoned food. It’s the light fixtures, the art, the music, the noise, the random vintage crap on the walls, the tables, the servers (their attire, their demeanor, their anticipatory skills). It’s the glassware and stemware. It’s the people who frequent the spot, becoming a semipermanent art installation themselves.

And sense of place is pretty remarkable at Civico 1845 in Little Italy. Maybe it’s the grandfatherly man who greets guests, as grumpy as he is lovable. Maybe it’s the heavy Italian accents that fall from staff and patrons alike, imbuing the air with a sort of Southern Italian music. Maybe it’s the way the servers treat kids like they’re their own in a very Italian way—patting them on the head, lifting them up to hug them.

This is an Italian family restaurant, no mistaking. It feels as though you’ve crashed a family dinner somewhere in the toe portion of Italy, and have been warmly welcomed. Civico is a partnership between the Gallo family—specifically brothers Dario and Pietro, who moved to San Diego from Cosenza, Italy, in 2013—and longtime Little Italy restaurateur Flavio Piromallo, the man behind Buon Appetito and Sogno di Vino.

One of the biggest things Civico has going for it is light. Plenty of it. Most of the restaurants in Little Italy are shaded from the late afternoon sun. But located on the corner of India and Fir streets, Civico gets plenty of it. It also benefits from being on the busiest corner in Little Italy, right next to the public fountain where people enjoy the famous San Diego air and where the occasional impassioned homeless person gives impromptu talks on politics.

One of the most interesting things about Civico is that it’s an Italian restaurant with a full vegan menu. Italy will never be confused with vegetarian-forward countries like India. It’s a cuisine built on veal and guanciale and pecorino cheese. And yet, Italian food lends itself well to vegan options, what with pasta and bruschetta and tons of meat-like umami coming from staple ingredients like tomatoes and mushrooms.

Our first night, we select from their omnivore menu and find success with the anitipasti and salads. The first is the heirloom burrata caprese, with extremely good quality burrata cheese (a ball of semi-hard mozzarella, surrounding the lusciously creamy interior) served with arugula over a bed of thin, microplaned tomato slices, red and yellow, plus cold-pressed extra-virgin olive oil, black lava salt, and a balsamic vinaigrette. The salad we order hesitantly, because "imported Italian tuna" doesn’t sound very fresh, nor appealing. But our server can’t recommend it enough, and we listen.

It’s a good choice, listening. The Calabrese con tonno has tomato, red onion, black olives, hearts of romaine, pecorino that’s been infused with Calabrian chilis, and, atop, a hunk of what appears to be canned tuna. And it’s delicious—the subtle heat of the chilis, the fat of the pecorino, and the unmistakably delicious brined and seasoned tuna.

Our entrees, however, fall short. The pappardelle brasato comes with slow-braised short rib, cabernet, and Parmesano-Reggiano. This dish should be exploding with flavor, braised into a concentration that induces moans. And yet, the flavor is faint, thin, unremarkable, and a tad light on seasoning. The capellini alla puttanesca, too, should be loaded with briny goodness with capers, black olives, tomato sauce, and Calabrian chili pepper. But, again, it lacks the bright boldness we expect.

On the second seating, I decide to eat my way through most of the vegan menu, if only for the novelty of it all. The first taste is phenomenal, a caprese calda of oven-roasted heirloom tomato, rice mozzarella, and arugula pesto. Italians believe in good olive oil more than most, and that’s a boon for the pesto and this dish. "Rice mozzarella" sounds like a crime against humanity, but is surprisingly good.

The lasagna Romagnola is a well-seasoned meat replacement dish, in which seitan and vegan Italian "sausage" form a very fine ragout, and it’s enriched with "béchamel" (the vegan version is usually made with soy milk and olive oil) vegan parmigiano (usually a combo of nutritional yeast, nuts, and garlic). If it struggles in any department, it’s that you don’t get that wonderfully crisp edge. It’s delicious, but almost all soft.

With the other dishes, I discover what I’ve long known through experience. Vegan cooking, to an omnivore like me, always tastes like it needs more salt. It’s most likely because my palate is used to meats, which are often heavily salted. Vegan and vegetarian chefs are simply exposed to less salt, and therefore don’t crave it or see its use.

So, really, it’s my own fault. I add salt to both my gnocchi alla caponata and fusilli dell’orto, and they come alive.

The fusilli, made in-house with khorasan (an ancient grain and close relative to wheat), is excellent. Khorasan has a higher protein content than wheat, and so the resulting pasta is more tender and nutty, almost spiced. The dish gets umami from oyster mushrooms and tomato sauce. The gnocchi wins on flavor, a nice shock of brininess from the eggplant caponata, but loses on texture, as the potato dumplings are a bit dense and not pillow-like, as the best gnocchi is. Salt does it wonders.

Desserts hit and miss in surprising areas. The miss is the cannoli, which is almost savory and needs a bit more sweetness or nuttiness from additional pistachios. The absolute hit is the vegan gelato pistachio. Dairy products made vegan are often unmitigated disasters, but this is rich, creamy, loaded with pistachio flavor. It helped to alter my heretofore negative impression of vegan sweets.

All told, this corner of Little Italy is a bright, warm place to dwindle down the afternoon sunlight. It’s easy to feel as though you’re related to the owners and staff. I just might pack some sea salt for the excursion.