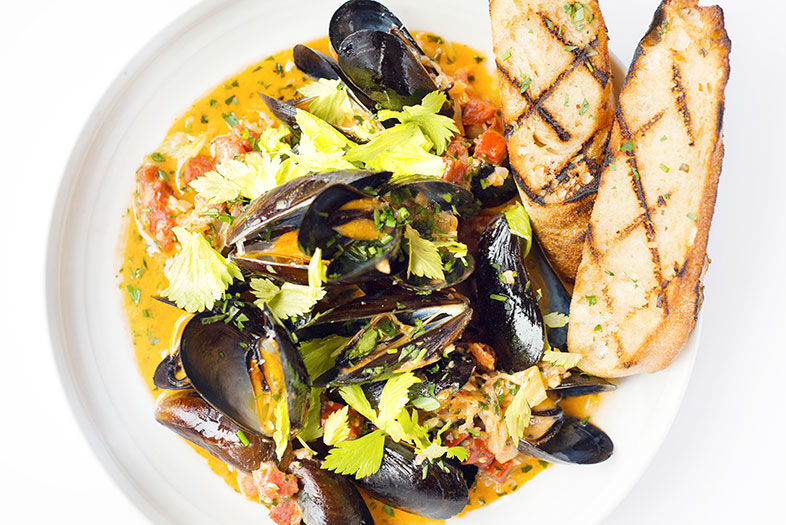 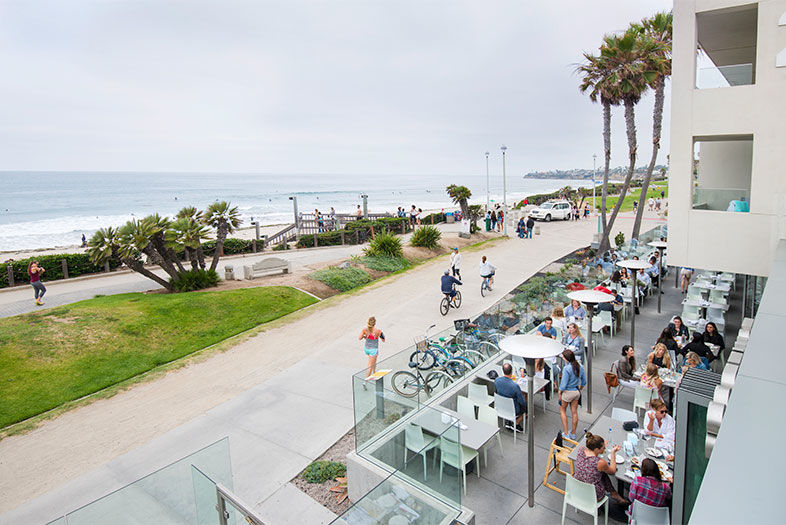 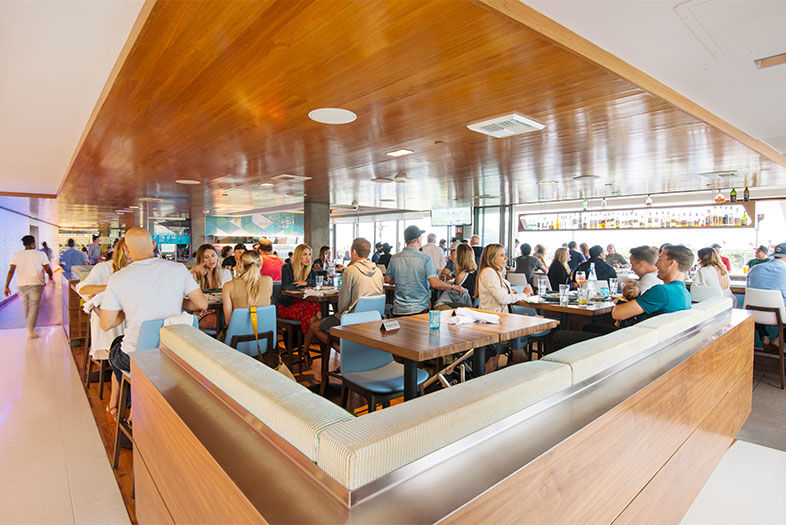 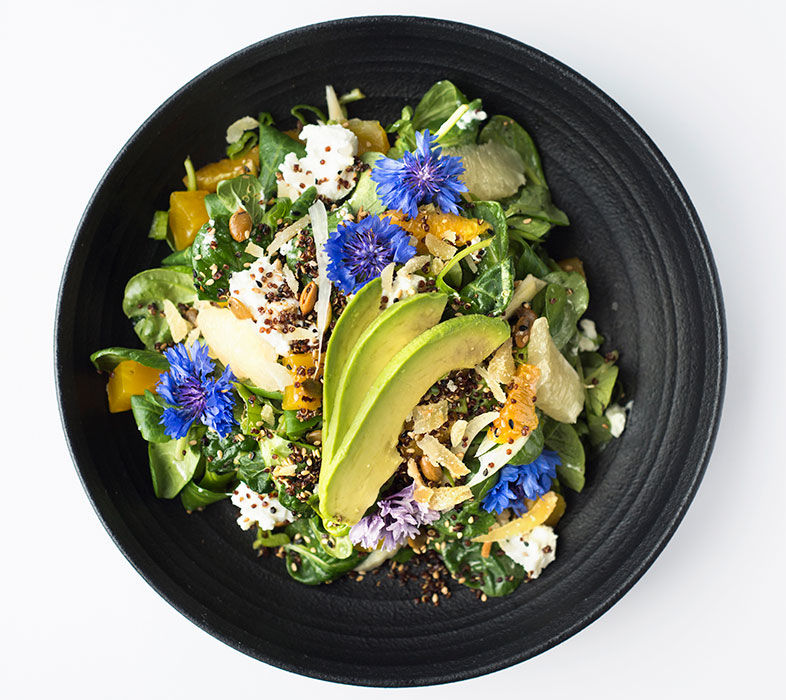 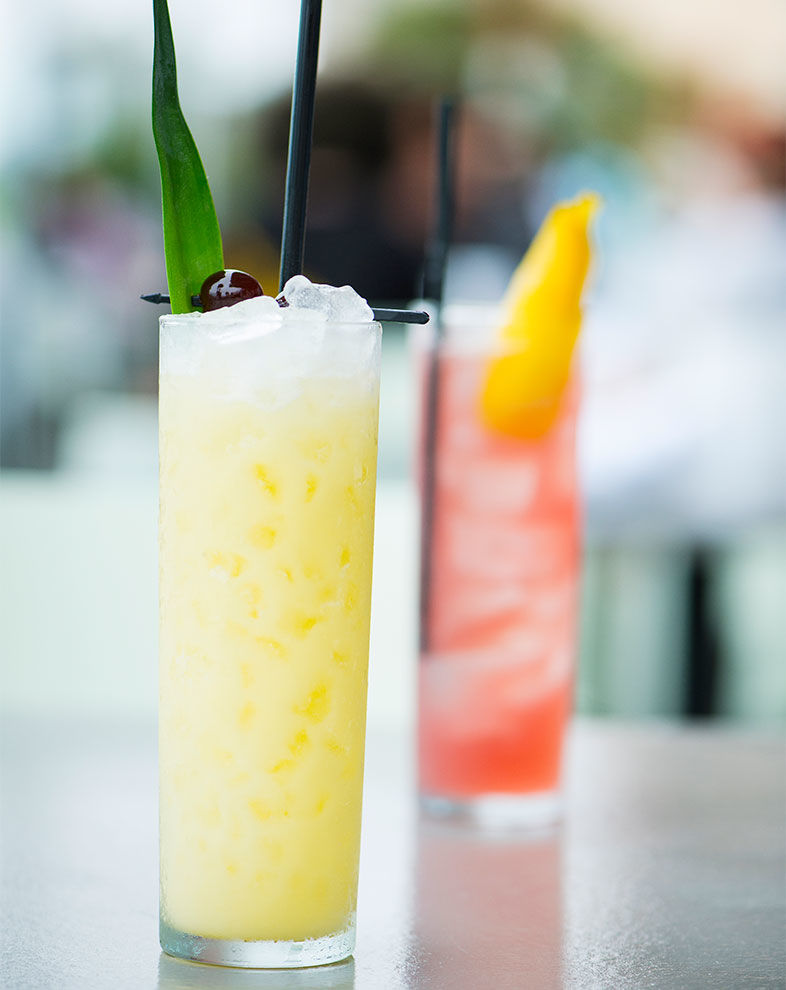 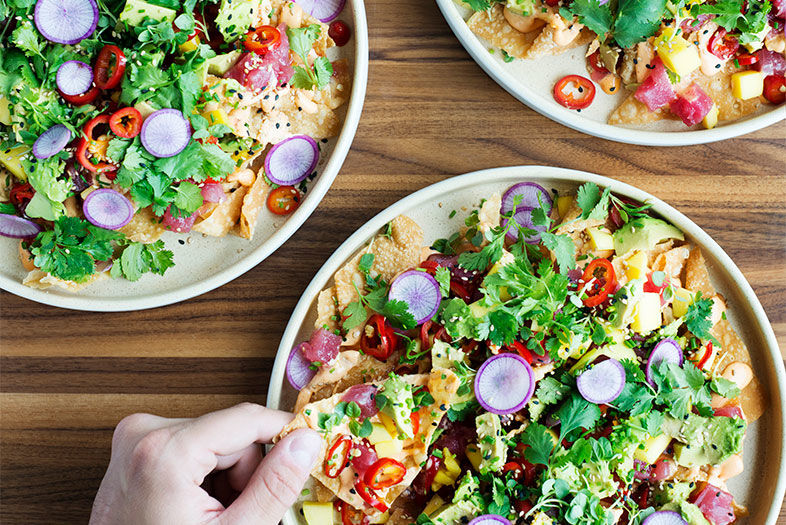 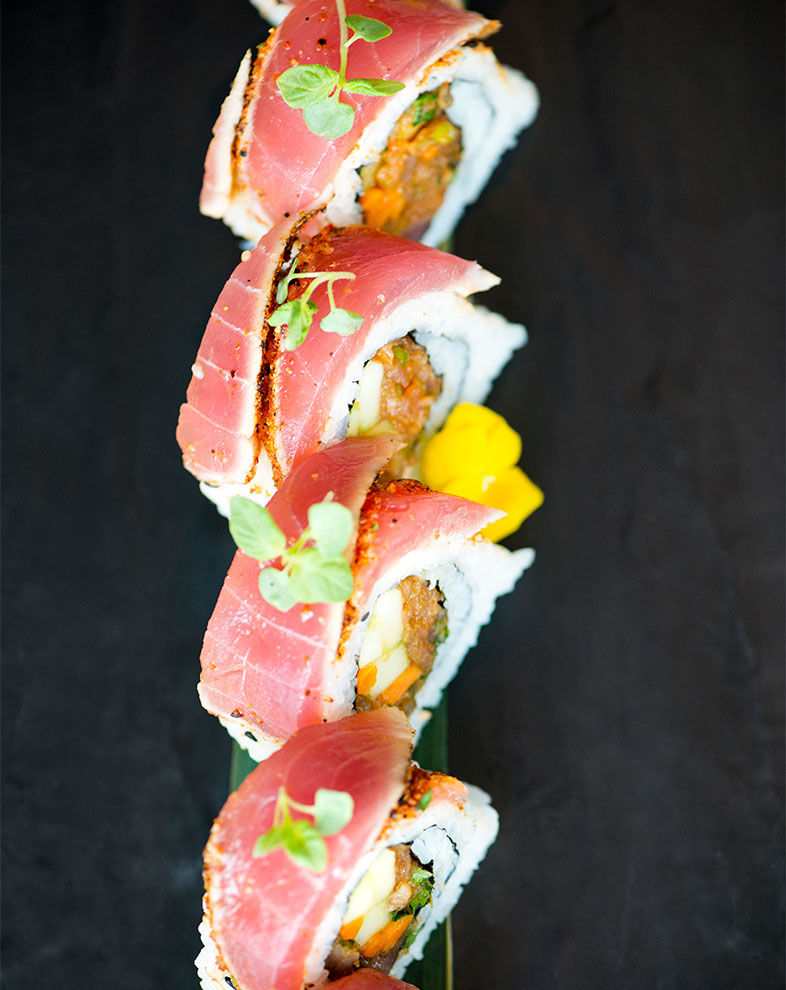 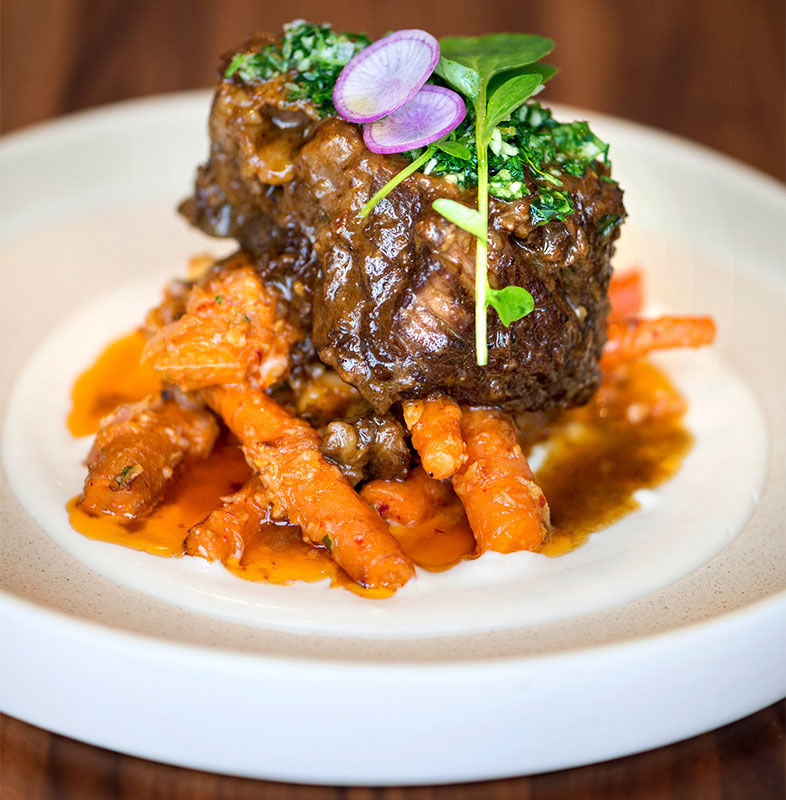 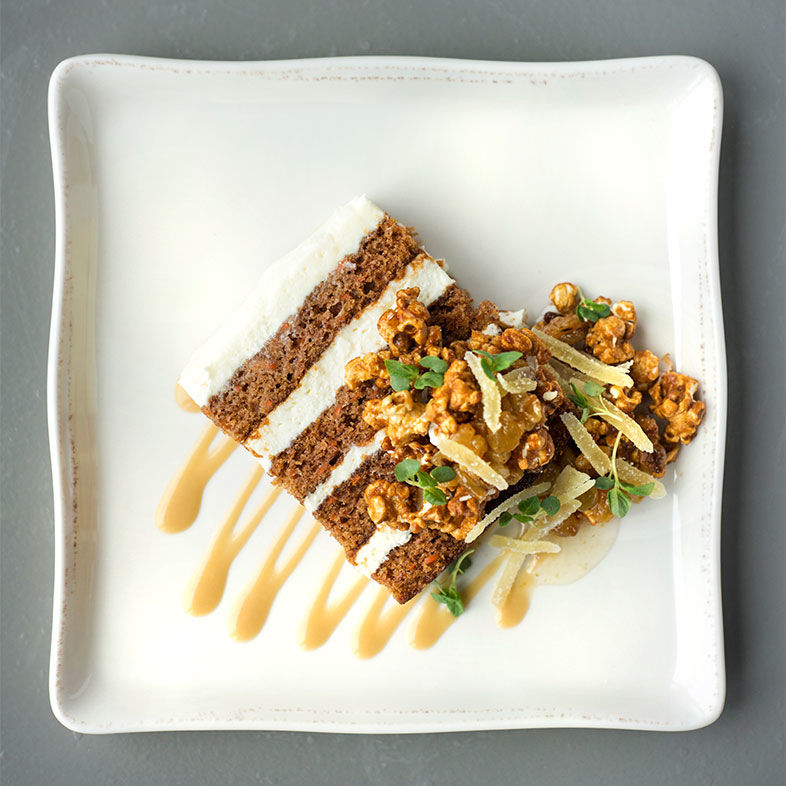 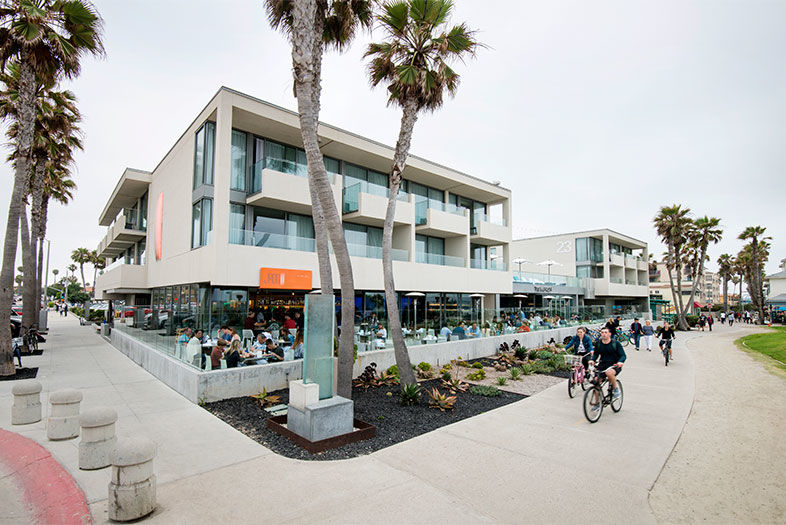 No one will accuse Pacific Beach of being a food paradise. It’s still the place you can slash-and-burn brain cells with test-market boozes. You can dine with your shirt off. Pants, too. American flags are upcycled here and artfully transformed into bikinis. Here you feel entitled to a senior discount at age 24. Catering to the 20-something demographic, Taco Tuesday is as sacred as church. But there are now real dining options, from The Fishery to The Patio on Lamont and Costa Brava. In fact, there’s always been good food here. One of the best restaurants in San Diego through the ’80s was Gustaf Anders in north PB.

Jrdn has been a fine-dining beacon since it first arrived in 2006. Housed in the ground floor of boutique hotel Tower23, it’s a modern, sleek patio and bar known for top chef talent (Brad Wise cooked here before opening the stellar Trust in Hillcrest) and world-class people watching. The patio’s glass partition frames the boardwalk and Crystal Pier, where street-smart seagulls dive-bomb milky-white tourists who’ve briefly escaped their beachless homelands. Visitors slow-ride rental bikes along the boardwalk with their planet-size sun hats, dangling cameras smudged with white fingerprints from their 6,000 SPF sunscreen. The patio at Jrdn is the best place to see what the world looks like half naked on Rollerblades, the wind in its hair and the California in its eyes.

I have renewed interest in Jrdn for two reasons. First, the hotel and restaurant, originally designed by the late architect Graham Downes, got a remodel, adding a glass-enclosed sushi bar, new bar seating, and furniture. Second, they’ve brought back talented chef David Warner, who’d left for a while to head up the now-closed Bottega Americano in East Village. He’s authored some of the best dishes I’ve tasted. His menu at Jrdn is a long read, with share plates, a bevy of sushi rolls, and entrées.

My lunch starts out with a succession of hits, like the pickled and roasted beet salad with tatsoi (Chinese cabbage; eats like spinach), supreme citrus segments, goat cheese, avocado, pickled fennel, toasted quinoa, and yuzu vinaigrette. The star is the candied ginger, giving each bite a burst of spicy sweetness. The "ahi nachos" don’t look like much, but they’re delicious, with lightly fried wontons instead of chips, chunks of raw tuna, mango, avocado, Fresno chiles, chives, shiso, cilantro, and sesame seeds, all tied together with a Sriracha aioli. But it’s those mussels that give real purpose to life, arguably the best I’ve had in the city. It’s all about the sauce, which is a mix of chorizo, garlic, Chardonnay, tomato, fennel, cream, and herb butter.

Things fall apart when the sandwiches arrive. The lobster BLT is a naughty indulgence at $21, lump meat tossed in a fantastic tarragon aioli, tucked under buttery, toasted brioche with thick-cut bacon, lettuce, and tomato. But my second bite reveals a pretty big problem that shows up during both meals at Jrdn—inattention to some basic, important kitchen stuff. In this case, it’s lobster shells. Not one, but a few hefty pieces.

There are a few hard rules in restaurant cooking. One is: Don’t break teeth. Certain shells are no big deal. Some weirdos actually eat shrimp shells. An eggshell here and there is fine—not fun but neither ruinous. But lobster shells will send a molar to the afterlife. So if you’re making a lobster BLT the star of your lunch menu, the cook charged with breaking down the crustaceans really has one essential job: absolutely no shells. That awesome aioli will take care of the rest.

You often see these kinds of mistakes during Monday lunch services, when young cooks are learning to fly. But on a Thursday during prime summer season, Jrdn should have their A-team in the kitchen, doing A-team work.

At dinner, this same inattention reappears in the vegetables. The asparagus is so undercooked, the audible snap could set off car alarms. The bok choy is unchewable. The carrots, too, are crunchy and fibrous, as if I’m shopping at Whole Foods and decided to snack.

Sure, you can eat raw carrots. Point is, the chef obviously intended for these carrots to be cooked, and they’re not even close. A good kitchen is separated into areas of expertise, where one cook executes one part of the menu—grill, sauté, compose salads, cook veggies, whatever—over and over and over, because repetition yields perfection. And yet, one part of Jrdn’s kitchen is comically undercooking.

The whole dinner is a pretty spectacular bust. The halibut and half fried chicken are both overcooked, while the lamb lollipops are raw enough to need a shepherd. And for dessert, an "ice cream sandwich" is served with ice cream so hard you need a pickaxe to get through it. When the server offers me a steak knife, I think he’s kidding. He’s not.

To make matters worse, some staff seem almost cavalierly uninterested in Jrdn’s food. Servers and food-runners are the apostles, spreading the gospel of the kitchen to guests. If they’re not knowledgeable and passionate, they come off like a missionary knocking on your door and saying, "Have you heard about God? He’s pretty cool, I guess. I dunno, maybe not. I better go."

If you’re going to sell $34 miso-glazed halibut with shrimp dumplings, shiitakes, candied leeks, and brown butter dashi, the staff needs to be able to describe it in lurid, epic detail. They need to sell it. When my halibut arrives, I ask the food-runner what I’m looking at. She says, "Halibut, and there’s sauce," and walks off. To her credit, she returns minutes later and tells me what kind of sauce. But this isn’t a special menu item, a one-night-only dish. This is an anchor of the dinner menu.

Granted, a large chunk of the workforce in PB is college students. Students are known for their inquisitive minds and beer pong savvy, not their dedication to long-standing employment in the restaurant industry. Still, Tower23 has posited itself as the nicer, if not nicest, option on this attractive stretch of Southern California beach. If the world is Coachella, this is a main stage. An employee shouldn’t be set free on the floor until they can recite the entire menu by heart, ideally with passion and some basic knowledge of why miso works great on whitefish.

I realize I don’t sound very nice, but Jrdn’s short rib is. It’s the star of my dinner, slow-braised to tenderness and lovingly slathered with thick jus and a ginger gremolata over a cauliflower puree. It’s the kind of intensely flavorful dish I’ve come to expect of Warner. He’s got the talent to rejuvenate Jrdn. But he’s only one man. He’ll need to start this transformation at the bottom, educate his staff and hammer in their basic skill sets, and work his way up.