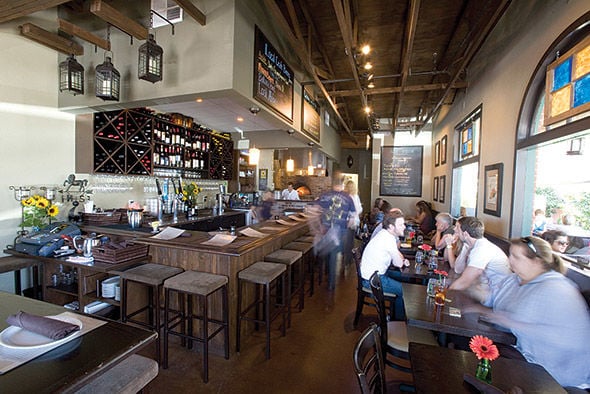 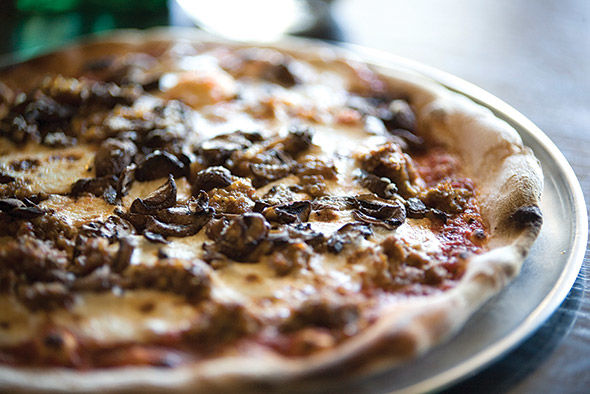 For a chef who has spent most of his culinary career in the kitchens of fine dining restaurants, Blue Ribbon’s chef-proprietor Wade Hageman seems to be just as content at a pizza oven. He’s made a full circle of sorts—from a first cooking job at a Southern Italian pizza place to a stint manning the wood-fired oven at Wolfgang Puck’s flagship restaurant Spago. While working as the executive chef at Solana Beach’s Blanca, he had the pizza oven that he now uses at Blue Ribbon stored in his garage. When he left Blanca in late 2009, he found a new home for the oven, and himself, in a coveted corner restaurant within the densely packed Lumberyard Shopping Center in Encinitas.

Hageman says that he’s never been happier than at the helm of Blue Ribbon Artisan Pizzeria, which he opened last June with his wife and front-of-house manager Kristi. The eatery is small, with a smattering of two-tops, some bar seating, and one long communal table. Business is booming, as evidenced by recent lines out the door, yet the couple has no current plans to expand the concept beyond their single North County location, though they have added a few extra tables on a patio, where fuzzy throws ward off the occasional coastal chill.

I first tried their pizzas when the restaurant opened last summer. The crust was simultaneously brittle and tough, and the chef admits that it took him a little while to find the right texture for the dough. He worked on developing flavor, too, settling on a three-day fermentation process that gives the finished crust a subtle, sourdough-like twang. Hageman makes it clear that he is not making Neapolitan-style pizza, though he did spend a few days training with a master pizzaiolo at a school in Marina del Rey; he likes a thinner, crackly crust, so the pizzas here spend four to five minutes in the hardwood-fired oven and emerge crispier than their Italian counterparts.

The chef considers Blue Ribbon an American farm-to-table pizza shop, with a product that is distinctly artisan, down to the 10 taps of local craft beer. The restaurant has had to do a little education with customers accustomed to huge, cookie-cutter, chain-type pizzas; here, the pizzas—from $12 to $16 each—are cut into six satisfyingly-sized slices and, as the menu points out, are hand-shaped and therefore not always perfectly round.

Toppings are top-notch, from housemade fennel seed-flecked sausage to hand-stretched mozzarella and carefully chosen cured meats. The house sausage tops the simple but tasty Classic Pizza with mushrooms and a pie called the Staff’s Favorite—also one of mine—which forgoes the mozzarella for just a drizzle of heavy cream over the tomato sauce. Whereas the sauce on a Neapolitan-style pizza is usually a bright, uncooked purée of tomatoes, Blue Ribbon’s sauce is cooked down until rich, savory, and zesty with Italian spices. Crumbled sausage shows up again on My Father’s Pizza, in a hearty mix with artisan pepperoni and roasted red onion. If you like it hot, add on a dose of chopped Calabrian chili peppers, which pack a potent punch.

You can assemble a fine meal by sharing a pizza and a few appetizers, mostly salads, soups, and bruschetta whose toppings change with the season. Chef Hageman says that the food he’s doing now is not so far removed from his fine dining days, that he’s using the same great locally-sourced ingredients—in his words, "there’s no excuse not to"—just in more rustic dishes, prepared with less fuss.

Little Gem, an heirloom variety of lettuce, look like miniature heads of romaine and are ultra-crispy and sweet. Blue Ribbon uses them in their version of a Caesar salad, coating the leaves in creamy dressing made with Spanish white anchovies and a shower of garlicky toasted breadcrumbs and grated parmesan. The chilled calamari salad is refreshing in its flavors and preparation; the barely blanched seafood is tossed with a light and creamy sauce seasoned with Meyer lemon and black pepper and set atop a bed of arugula, shaved radishes, and sweet-as-candy English peas. At lunch, a duo of smaller-sized portions of these salads, and many of the other starters, are $9.

There’s only one dessert offered, but who needs more when it’s a near-perfect, just sweet enough, butterscotch pudding. Served in a squat canning jar, the silky pudding is enriched with dark rum, topped with a vanilla flavoring, sea salted caramel, and a little crown of whipped cream. Be warned, attempts to share this with a friend may result in unbecoming dessert hoarding.

Legendary chef, restaurateur, and cookbook author Thomas Keller is a culinary idol of Chef Hageman, and the man himself stopped into Blue Ribbon for a meal while here on a vacation and declared that if he lived in San Diego, he’d eat there once a week. High praise, indeed. If I lived in the neighborhood, I might, too.

News and views from Candice Woo’s blog at sandiegomagazine.com

The corner space at W. Washington and Albatross in Hillcrest has been through a few coffee shop iterations, but District Coffee Bar, which moved in and opened for business earlier this month, might be the place most serious about coffee to-date. With a sleek design, the coffeehouse puts the focus squarely on coffee—serving only beans from Chicago/Los Angeles-based Intelligentsia Coffee & Tea (also found at The Linkery), including the company’s Black Cat espresso blends. Order a cup of coffee at District and the beans will be freshly-ground and brewed using the pour-over method: through a coffee filter-lined ceramic cone set atop a glass carafe. The coffee bar also serves great pastries from Darshan Bakery in Encinitas.

Residents of Mission Hills, Hillcrest, or North Park will soon have the opportunity to shop and eat at a new neighborhood market and cafe called SOL, which stands for Seasonal, Organic, Local. SOL’s creators, longtime friends Vince Brown and Jerry Moore, wouldn’t divulge the market’s exact location, but my money’s on North Park. The 4,000-square-foot market will stock 1,500 products, all locally sourced or produced in San Diego County, including fish and meat. They should be ready for business by early September and will open an adjacent cafe serving local craft beer and wine, as well as hosting live music, art shows, and culinary classes.

A New Face at The Pearl

Point Loma’s The Pearl Hotel finally has a new executive chef and a new menu, just in time for summer. Jaison Burke, who attended the New England Culinary Institute, comes to San Diego via various farm-to-table restaurants in Virginia. Look for his signature on the new dinner menu and Sunday brunch.