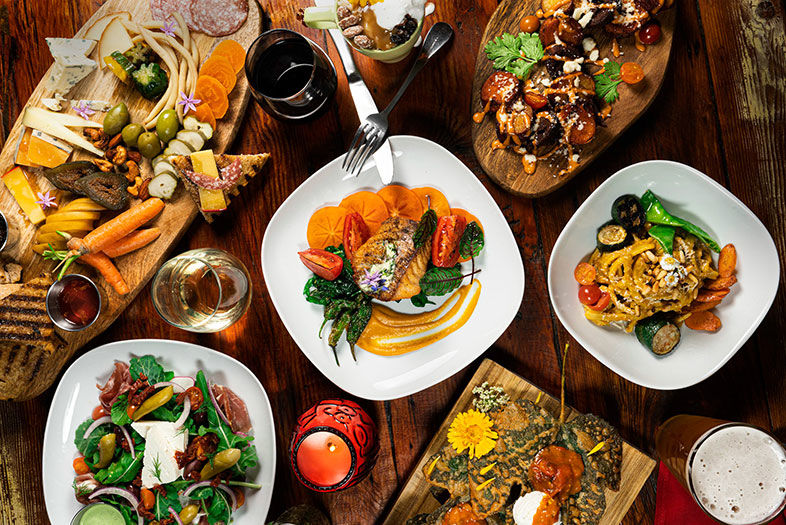 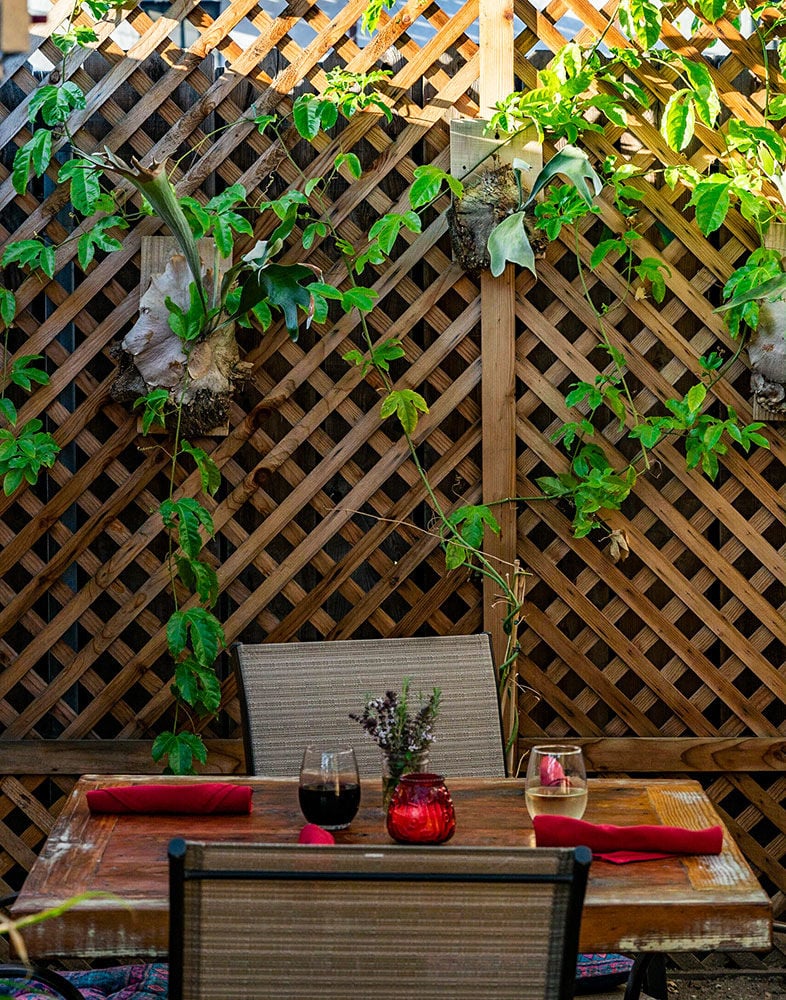 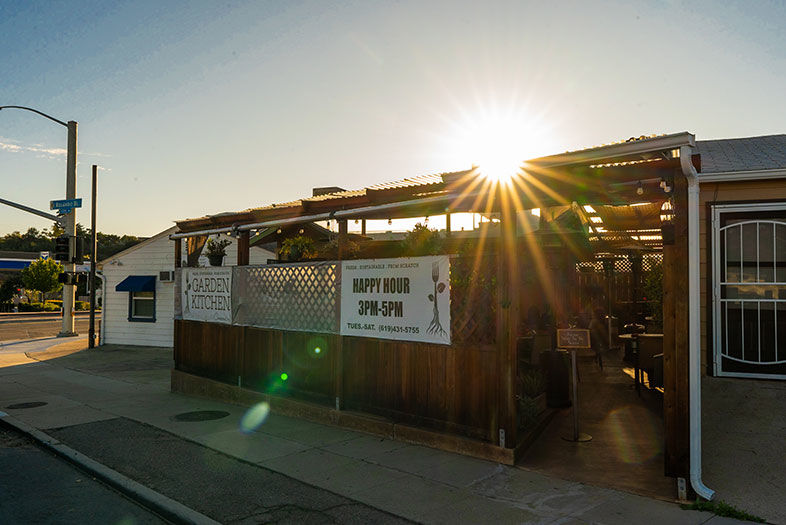 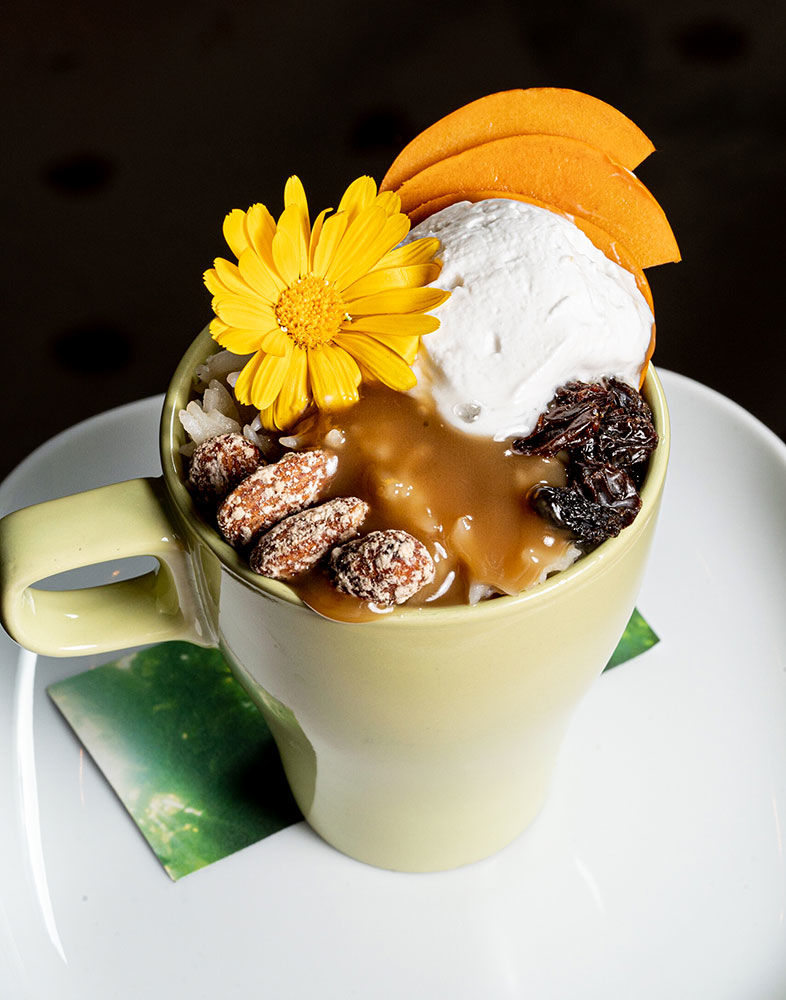 A famous interior designer did not touch this place. A local artist is painting a giant mural, somewhere I’m sure, but not here. The chef did not intern under Thomas Keller, is not a celebrity, was not cast in your favorite cooking show. And yet Coral Strong and her husband, Russ—whom you can often spot here washing dishes after his day job—are pretty famous in Rolando, a part of San Diego County not often highlighted in tourist briefs. Their names are spoken reverently up the catwalks through the bungalow-style homes, which sprouted in the rolling hills here after World War II. Their names are used as persuasive incantations by local residents who are tired of the area’s prolific fast food or their partner’s cooking, yet aren’t real enthusiastic about the 20-minute drive west to "the city."

Chefs with award-winning pedigrees deserve every bit of hype and acclaim. They’ve slogged, honed, starved in order to cook. They’ve earned their multimillion-dollar restaurant openings in the heart of human activity. But for every one of those, there’s a cook in a remote corner of the city cranking out notable meals. It’s passion projects like these that seismologically shift food cultures of entire neighborhoods.

And Garden Kitchen is one of them.

It shares an unglamorous street corner, across from Party House Liquor and a funeral home, surrounded by other houses where people actually live. The restaurant is a stucco bungalow with a history of homespun commerce. It was a few different restaurants before Garden Kitchen arrived four and a half years ago, and before that a family home. There’s a sense that kids were raised here; the walls are full of songs and reprimands and generations of spices blooming in hot oil.

The entire dining area is around the outdoor edges of the house, where a person might once have kept a grill, a few bags of mulch, a swing set. The local-favorite seat is a two-top on a pedestal, which hides the grease trap. The Strongs have spruced up the walls with bamboo for a speakeasy vibe Thurston Howell might’ve enjoyed. There are candles with real flames and fresh-cut flowers on each table.

You might wait a few long minutes at the hostess stand. The restaurant seems to staff with precision based on reservations, and having a full-time hostess would be financial negligence. People at a restaurant like this understand that everything is tended to in its time, including guests. Though the kitchen is, surprisingly, not slow. They crank. Standing there, you can see many women through a large window, their sweaty hair in ponytails or tucked into bandanas, cooking furiously.

It doesn’t take long to detect the allure of Garden Kitchen. It’s the gangly pile of mutant arugula tucked under the roasted bone marrow. The marrow is good, well seasoned though a bit over-rendered (it should still have flotillas of meat butter, and this is mostly liquid), served with house-baked bread (grilled, because the extra mile is the only mile here). To bake bread in that contortionist kitchen while also prepping dinner service is nothing short of masochism. But it’s the arugula. The leaves are easily four inches long, and arugula has never tasted so arugulish. It reminds me of the first time I tasted a farmers’ market tomato, years ago, and was physically stunned. It made me briefly wonder if chain grocery stores could be sued for tomato fraud, theirs tasting like tired water.

Strong says 95 percent of her produce comes from farms within 25 miles of the restaurant. Instead of working with a distributor for local farms like Wild Willow and Stehly, she goes directly to them. Her menu changes every single day depending on what’s fresh from their soil. Her original chef quit because changing a menu every day borders on the deranged. Even ardently farmy chefs create, then coast a bit; create, then coast.

"Farm to table," like all good movements, has been co-opted by the scruple-deficient in the industry. Certain restaurants claim to be working with local farms, only for the farm to say "They’ve never bought from us" when I ask. Even as local farm-to-table has become standard industry practice, there’s an exceeding vitality to Garden Kitchen’s vegetables, a profound intensity of terroir.

The sweet acidity of cherry tomatoes in her Un-Caesar Salad, even late in the season, tastes like it’s August (San Diego’s climate stretches growing seasons like a frugal grandmother stretches a dollar). You can almost forgive her for not really seasoning the delicata squash under her pink-perfect salmon with kimchi butter. If Strong has a critical flaw, it’s believing too much in the power of her farmstuff. But still, that delicata nearly carries the dish without support, the semisweet gourd perfectly roasted over zoodles (zucchini noodles, also a bit plain).

Raised by a commercial fisherman in San Diego, then Costa Rica, Strong says she never cooked until her chef quit. She was an accountant. She apologizes to people who say they were here on opening day. You can see her lack of training in some things, like the fresh-made pesto linguine that’s a bit dry without a finishing oil (though the shrimp are excellently seasoned, and she nails the tiny window of time shrimp have between being succulent and being pencil erasers). The cuts on her veggies are too big; they make you do the work. And she tends to cram dishes full of ingredients and sauces, overpopulating the recipe hoping for a chorus that works.

But damned if most of them don’t come through for her. A pork and lentil soup is rustic like a chili, and that housemade broth is a riot of spices, delicious. Her beef Bolognese has a seven-hour marinara sauce, the high notes of long-stewed tomatoes anchored with warm bass notes from caramelized onions. The beef is, of course, grass fed, and the whole thing is a square, comfort-food meal with creamy polenta and Pecorino-Romano. The vegetarian green curry is the best dish of the night I’m there, the spices so perfectly infused into the luscious coconut cream, whole vegetables carrying the sauce in their nooks and crannies. Claiming all vegetarian food tastes like a poor compromise, though possibly true decades ago, is starting to prove a show of generational ignorance.

95 percent of the produce comes from farms within 25 miles of the restaurant. The menu changes every single day depending on what’s fresh from their soil.

None of these dishes will be available tomorrow. There’s something sad and inspiring about that, a commitment to constant, obsessive reinvention based on what’s fresh out of the ground.

They recently annexed the structure next door and created a "wine lounge." To say it’s tiny is to exaggerate square footage. Inside, you’ll meet a certified sommelier who lives in Baja and is well versed in Valle de Guadalupe winemakers. The night we’re there, a wine broker from Valle is sitting in a leather chair as if this were his ancillary home. This is a place where food people—especially those from real farms, wine or otherwise—make home.

Garden Kitchen’s customer sweet spot seems to be serious food folk who, for one reason or another, have found themselves on the outskirts of a major metropolis. Though this stretch of University Avenue looks fairly tragic, Rolando’s hills are full of very nice homes, with a highly educated population and a strong LGBTQ crowd. The area has Alforon’s majestic Lebanese flatbreads, Fattoush’s drink-me garlic sauce, and longtime farm-to-table chef Jeff Rossman (Terra American Bistro) nearby in La Mesa.

Rolando’s showing it’s got the sort of locals with the means to try Garden Kitchen’s $27 grilled bison steak with Thai chile and ginger-garlic-tamarind marinade, cooked pink and sliced correctly on the bias. A trio of dapper gay men sharing a bottle of Mexican wine. A young couple still experi­menting with hair colors and punk aesthetic. A 70-something woman with a 30-something shade of red lipstick regaling her companion about the time she took LSD on an airplane, but in a way that suggests this was simply one of her many exclamation points in life, no big deal. I see very nice jewelry and I see old T-shirts. I see the gamut of a neighborhood.

For dessert, the vegan chocolate tart is something that reappears occasionally in some form or another, because it’s a hit. The chocolate custard is so silken and sheened it looks polished, topped with coconut whipped cream, almond crust, pistachio crumble, and fresh mint.

To make this much higher-end food from scratch, in that tiny space, is more a manifesto than a reasonable plan. A restaurant expert would tell Strong to outsource something—the bread, the sauces, anything. And she would respond that Chipotle is down the street, thanks for the consultation.

Rolando isn’t the next Little Italy. But locals don’t have to drive there to taste what’s happening in serious food.

Neighborhood: Rolando—off the 94 East, right before you get to La Mesa